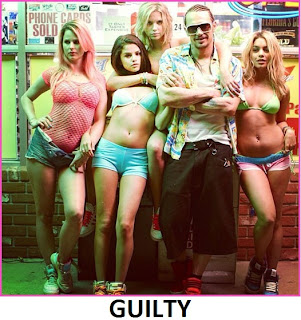 Every once in a while, a film comes around that changes your life.  A film that you’ll tell your kids and grand-kids that ushered in a new wave of cinema.  A film that will be a landmark moment where all film-goers collectively get out of their seats, and initiate “the slow clap.”  A film that will be broken down in film schools across the world and film historians will bring up in conversations with the likes of “American Beauty”, “Casablanca”, and “8 1/2.”  Well, this isn’t this film, not even close, but despite what a lot of people have said, and are saying, “Spring Breakers” might not be pretty, but it just might be the biggest guilty pleasure film in recent memory.

“Breakers” can be lumped into two categories; it’s either a soft-core porn that is cashing in on the popularity of “Disney girls” who are trying to break free of their kiddie-image, but they are being exploited just as bad, if not worse.  Or, you can look at it as a caricature of Spring Break culture that you might have seen on MTV back in the early 1990s, and an expose on small town life versus “the real world.”  I promise, I will not dig that deep into this movie, because if you go into “Breakers” looking for deep meaning or a reason why the movie was made you are going to miss out on a film that is super fun, super awesome, and super stupid, but stupid in that way that you might have said back in the 1990s, ie, STUPID FRESH!

In case you haven’t heard, the plot is simple.  Four friends, Candy, Cotty, Brit, and Faith, don’t have enough money to go to Spring Break in Tampa/St. Pete, Florida so they do what any rational young college student would do; rob a restaurant to finance their trip.  After their successful robbery, the four girls head to Spring Break for the time of their lives, that is until they’re arrested and the party is over, or is it?  Bailed out of jail by a small-time gangster named Alien, played by James Franco in probably his most memorable role to date, things go from bad to worse for the four friends as they leave behind their dreams of the best Spring Break ever, and it turns into a nightmare…..or does it?

Part of the fun of “Breakers” is not knowing fully what the film is about.  Yes, at heart, it’s a skin flick that shows PLENTY of boobs, close up shots of crotchal areas, and any parent’s nightmare of what their precious little boys and girls are doing in vacation resorts around the country from late March to April.  Yes parents, your kids are probably having unprotected sex all over the place, while doing funnels of Natty Light, after doing coke off a townie’s ass.  C’mon, we’ve all been there before. 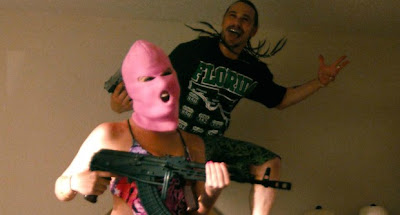 A few things surprised me about “Breakers” besides the fact that I truly enjoyed it, almost too much in fact.  Say what you will about Selena Gomez and Vanessa Hudgens; but they can act.  Yes, I said it, they can act.  I was almost surprised at how down and dirty they got, especially Hudgens, who gives the 2nd best performance in the film, but that best performance goes to Franco, who creates a character that is part Tony Montana, part Saul from “Pineapple Express,” and part rapper Paul Wall.  His creation of Alien is in fact other worldly, and his “Look at my shit!” and for lack of a better term, gun blowjob scene, are the highlights of the film. And like my co-reviewer said in his “OZ” review, Franco loves to mug for the camera, and he’s at his best in “Breakers” completely self-aware that he is in complete control of character.  Oh, by the way, for you wresting fans, your old pal Double J, Jeff Jarrett, makes a cameo as a Jesus freak.  Yes, that Jeff Jarrett.

This film is polarizing, and people are either going to love it or hate it, just like most of Harmony Korine’s films.  Let me put it this way, if you’ve seen “Kids” and “Gummo” and you hated them, save yourself  the money or just be lame and watch “The Croods” or “Tyler Perry’s: Temptation.”

Fun Fact:  Jeff Jarrett, while wrestling for the WWE, was a six-time Intercontinental Champion, a record at the time, which was broken in 2004.

The Simplistic Reviews March Madness Bracket of Good and Evil

The Simplistic Reviews March Madness Bracket of Good and Evil Round One Results: TV GOOD