98mins/Action/2013
Might have some spoiling but hey this film spoiled all that was good in the Die Hard universe.
Apparently this was a Die Hard Film…
Die Hard is and will always be the best or one of the best action films ever. Its even in my mind of one of the best films period. Then they did Die Hard 2 which is fine you know its okay, it has wisecracking John McClane so it a fun film. Then we got Die Hard: With a Vengeance which is fantastic! With Samuel L. Jackson this film got very close to original Die Hard. But those two are kinda different, the biggest is Die Hard with a Vengeance’s scope is so much larger, this time it’s racing around New York. Compared too Die Hard which was pretty much 99.9% in a building (which just goes to show you how incredible that film is). Years later we got another one, Live Free or Die Hard. And at the time I had issues with it but it was just fine and I kinda left it at that (I’ll come back to this later).
Then this year we got A Good Day to Die Hard and boy did I die inside. I could make a long ass list of the issues with this film but its not worth your time. So here is just a small bit of the bullshit this film was. 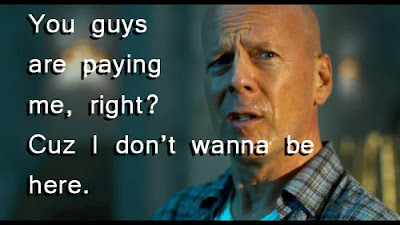 Story is very weak
Plot holes coming out of its ass
Bruce Willis SUCKS…John McClane never shows up
Weak Villain
Shitty Directing.
A Ending that made me shake my head in pain.
His son (Listen he wasn’t that bad, clearly the film was written for him but I came to see John not Jack)
The stupid “Jack we thought you went to Russia and where doing drugs, bullshit, no dad I work for the CIA” It just doesn’t work for me. 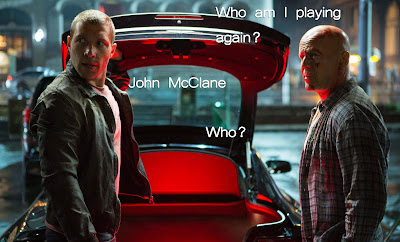 And so on…
Action was way out there, going through like 4 floors into water at Chernobyl and just acting like it wasn’t anything. Oh shit and there is a scene where his son gets a piece of rebar in him and they talk and talk then hey lets pull that bar out and boom he’s all good and healed.
Okay so Bruce Willis WTF? He never seems like he wants to be here. The thing about McClane is he is a fantastic character and honestly his lines never seemed like McClane nor did Bruce who was just Bruce. I have a sad theory that the new GI Joe film will have him play a more McClane like character, and that’s not good.
The Ending is so shitty its just sad. Here is what I would do. I would have him get off the plane and meet is Wife and Daughter and BOOM they all die and we end the pain I must now go through in life knowing Die Hard has a shitty film like this. I hated that damn ending. The music, them talking and not hearing what they’re saying (I mean its fine but that went on for like 2 min’s and I kept saying what the hell are they saying?). Then it ends with John half of the screen. The shot was so off it made me very upset. Listen it sums up the film, Johns is half off in this film (Should of been on the poster).
So back to The Live Free or Die Hard. I didn’t care for it when it came out but I watched it again and you know what its so much better compared to this shitfest,  even Bruce seems and sounds like John, why did they not just end it on that one…Oh yeah greed, the number #1 Killer of movies today.
…Oh I paid to watch this. Hummm wonder why people watch movies online, oh yeah to save their hard earned money and not waste it on films that should of never been made…never!
And sorry for the rant with spelling errors but I’m writing this and I quickly started to run away…So depressed. 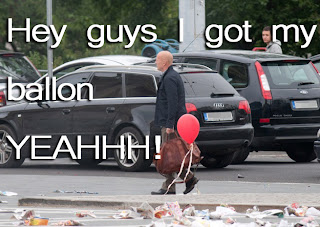 The Simplistic Reviews March Madness Bracket of Good and Evil Round One Results: TV BAD