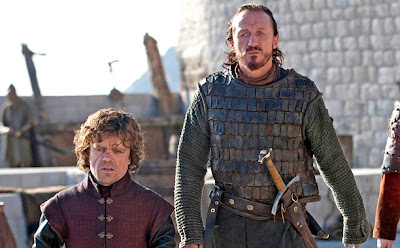 And just like that; it’s back!  The long-awaited season premiere of Game of Thrones was unleashed upon an unsuspecting viewership on March 31st, 2013.  I mean if I was Jesus, just getting out of the grave, I would be so pumped that I get to continue my journey with Jon Snow, Daenerys Targaryen, Tyrion Lannister, and our favorite boy-king, Joffery Baratheon.  However, before season three really kicks into high gear, I understand that it’s the duty of the showrunners to get into the swing of things with an episode, while there were great moments, that needed to build up some tension, introduce, and re-introduce, some characters, and setup what is to come for the future of Westeros.

Valar Dohaeris, meaning in High Valyrian, all men must serve, is quite the appropriate title for the season opener.  We pick up right where season two left off, our favorite tubby Night’s Watchmen, Samwell Tarly, running for his life from the newly-spawned, White Walkers.  What I like about what HBO did this time around is that they re-introduced the cold open, which hadn’t been done in an episode or GoT since the series opener, and I hope its a trend that they finally keep this season.

Moving from North of the Wall, to a little further South, but still North of the Wall, we catch up with Jon Snow as he is being led to the Kind Beyond the Wall, Mance Rayder, played by Ciaran Hinds.  A lot of people were criticizing the casting of Hinds as Rayder, but if there was anyone with acting chops to take on a meaty role like Mance Rayder, why not Hinds?  He already has HBO cred, playing Julius Caesar in HBO’s “Rome” and he’s simply a great actor.  I expect good things out of the Snow/Rayder dynamic. 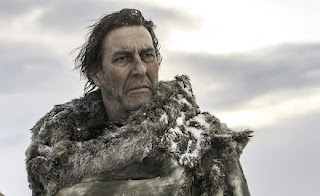 Meanwhile, way down South, in King’s Landing, Tyrion is coming to terms with his complete lack of power, but still think her deserves some credit for his battle plan against Stannis Baratheon’s army during the Battle of Blackwater.  However his father Tywin Lannister, who has taken his “rightful” place as Hand of the King, has other plans for Tyrion.  What I found most interesting about the Tywin and Tyrion confrontation is that at a certain point I was gaining some respect for Tywin.  Sure, he’s the head of the most hated, and feared, family in the Seven Kingdoms, but I saw something in Tywin that I respected beyond his ruthlessness and cunning nature.  But after his tirade to Tyrion, I’m questioning my respect, and I’m interested to see how this resentment plays out during the season between the father and son.

Across the Narrow Sea, we meet up with The Mother of Dragons, Daenerys Targaryen, who is seeing her dragons grow while trying to buy an army with the spoils she acquired after pillaging Quarth.  She arrives in Astapor, a slave colony, looking into purchasing a slave army called The Unsullied.  The army is owned by a ruthless, rude, and conniving master named Krazyns, who insults Dany in his native tongue.  On top of being insulted, Dany is also nearly assassinated by a young girl seemingly sent by the warlocks of Quarth.  Low and behold, her savior was not her sworn protector, Jorah Mormont, but the wayward Barristan Selmy, former captain of the King’s Guard.

As the episode proceeds we also check in on Robb Stark, Davos Seaworth, Stannis, and Sansa Stark.  Every major character is touched on, some more than others, but there is still enough revealed get your curiosity going and seeing where all the characters end up come season end.  What is even more interesting is the fact that both season three and the forthcoming season four will cover book three of “A Story of Fire and Ice.”  Where will season three end and four begin?  For you book readers I’m sure you already have a clue, but I won’t spoil it for the rest of the readers.

To serve all men, as I pointed out earlier, is very appropriate for the premiere.  We are seeing who is serving who, and continued play for power from Westeros and beyond the Narrow Sea.  From the lowest service of The Unsullied to the highest of service by Tywin Lannister.  it seems that all who are within service are working at the whim of either a Mad King, a lowly slaver, and everywhere in between.  With the tone set early, it seems that service and loyalty will play a major part this season.

Overall, it looks like Season Three of GoT will be the most ambitious yet, with several major plot lines to play out, and new ones to begin.  It will be our duty as viewers to sit back, relax, and enjoy the ride through, and beyond, Westeros.