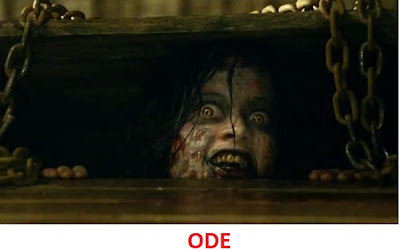 *I’d like to thank aintitcool.com for putting on this sneak preview of the film down in Miami, FL, and of course for bringing Bruce Campbell.*

I’m not one for April Fool’s pranks. I find them annoying, stupid, and most of the time, ridiculous.  But there are times when one happens, and its wonderful.  It’s even better when you are going to see one of the most classic horror films of all time, 1981’s “The Evil Dead” with Bruce Campbell in the audience introducing the film and conducting a Q&A after the film.  It’s even better when the film starts, gets about a minute in, and the film breaks, revealing the trick, which I had a sneaking suspicion was coming.  April Fool’s, you’re not here to watch “The Evil Dead” ’81, you’re here to watch “Evil Dead” 2013.  Truly, truly awesome, and now I’m lucky enough to bring you kids a review of the as-of-yet-unreleased “Evil Dead” remake, which is an ode to everything wonderful and right with horror remakes.

Everything you’ve heard about “Evil Dead” is warranted; it’s a brutal, bloody, gory, sick, twisted, squirm-inducing nightmare.  In the best way possible.  While, as a rule, horror remakes are usually unnecessary, I really thought “The Evil Dead” was in need of a tune-up.  Coming out three years after “Halloween” and merely a year after the genre game-changer “Friday the 13th,” “Dead” made it’s mark as The Ultimate Experience in Grueling Terror.  It was low-budget, gritty, and a new take on the slasher genre.  It had the demonic spirit of “The Exorcist” but the wink-wink-nod-nod of “Friday the 13th” and even some old Herschel Gordon Lewis films.  However, if you look at “Dead” now, it seems dated.  You can tell that it only took them about $300,000.00 to make the film.  Still, I believe in keeping a classic, a classic, and not messing with a good thing.  Come some 30 years and two sequels later, a new vision of “Evil Dead” is about to be unleashed nationwide, and with the blessing of Sam Raimi and Mr. Bruce Campbell, I can honestly say we got a winner. 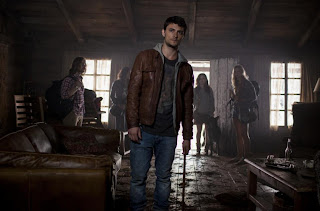 While keeping with the spirit of the original film, we follow five teens who have decided to head out to the middle of nowhere to a cabin in the woods.  The added twist this time around is that they are there for an intervention for Mia, played by Jane Levy, who could be America’s newest Scream Queen, a heroin-addict who just suffered an overdose.  I liked the fact that the teens are in the woods for a reason, because in films like these you always get a lot of red herrings, namely the Necronomicon, which is unnamed in this version, but you should know what the Necronomicon is at this point, where you have to suspend disbelief nearly the entire film, and don’t worry, you’ll have to do it anyway for most of this movie, in a good way.

While the story is reasonably strong for the genre, the violence and gore is ramped up to 11, and it’s wonderful.  The gore effects are great, and I was surprised to see that WETA was behind some of the work, and it makes sense, because some of the effects are right out of “Dead/Alive,” before Peter Jackson got all Hollywood on us genre fans. 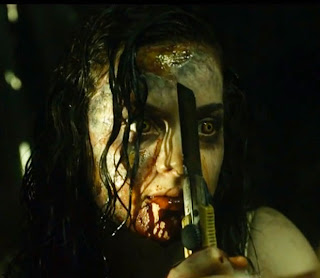 As a horror film, “Evil Dead” is fine, a bloody-romp in the vein of what most people are used to out of the horror genre these days, as a remake, one of the best ones made.  And while I use the term “remake,” “Dead” is more like a re-imagining of the original.  There are various odes to Raimi’s masterwork, including our heroine wearing a Michigan State sweater, to the old car that she is also sitting on.  We even get some chainsaw, yes, a chainsaw, what would an “Evil Dead” movie be without some chainsaw.  With all that being said, if you’re a purist, go into “Evil Dead” with an open mind, and have fun with it; there are plenty of odes to the original, and if you’re new to the world of Ash and the Deadites, do your homework and watch “The Evil Dead,” “Evil Dead 2: Dead By Dawn” and “Army of Darkness” (the primitive screw-head next to me kept calling it “Evil Dead 3.”  I wanted to tell him to go home because his mom called, and he had chores to do, plus it was a school night).  2013’s “Evil Dead.”  In a world full or remakes and bad ideas, its nice to see they got something right.  Hail to the King, baby…..

Fun Fact:  Look closely at the car Mia is sitting on and you’ll notice that it’s an Oldsmobile Delta Royale 88, the same car used in the original “Evil Dead” trilogy. Which begs the question, could this possibly be a sequel as opposed to a remake, or just coincidence?