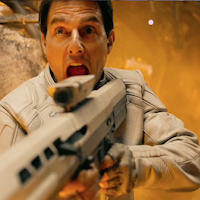 Story: Without getting into spoilers, do to the fact I could easy ruin the film for you, I’m just gonna say it’s pretty predictable. Way too predictable in the sense before every corner in the story, you will predict everything. Which of course hurts the film. The story is okay, really its just okay, sure it’s better then most in this genre and has a bit of originality to it, but we seen stuff like this before. The ending has issues and at times the story feels weak. The best parts for me is the music and the look of this film. The story does have twist and turns but when it happens you most likely figured it out for yourself. For me I kept saying, “Well okay that’s what I thought”. Is it good? Yes it is with all the issues its diffidently one of the better films this year. 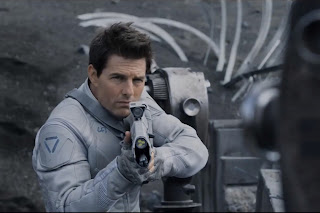 Olga Kurylenko (Julia) – Weak. The character and not the actress. The character feels like the writers just didn’t give the effort when writing her as like the others (mostly like Victoria who is awesome sauce).
Morgan Freeman (Malcolm Beech) – Well yep he’s pretty damn awesome like every time we watch him.
Music (M83) – My favorite part. Listen I’ve been a BIG fan for years now and always wanted to see the band do a score for a film. And at times during the film,  I would  just fall back into my chair listening to the score.
Tom Cruise (Jack Harper) – He’s Tom Cruise in this film…again. I kinda would like to have seen some one else but he did good, even at 50. 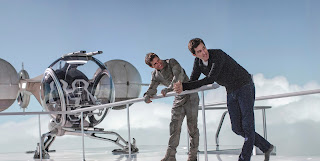 Joseph Kosinski (Director, Producer, Screenplay, Story) – The guy knows his stuff. When Tron Legacy came out, it brought a smile to my face. He took us to a world that I just haven’t seen or felt in awhile. The guy did that on his first film, his FIRST! This is only his second film, and I feel the guy just knows his stuff more then most, who have been at it far longer. Visually and musically the guy kills it.

Side-note: Apparently all the sky images you see in the film, according to the director, he photographed them himself and is not CGI! That’s what I like to see and hear!