I could make this review brief and just say “Rim” is great and you should plunk down $10 at your local multiplex and support a film that, one, doesn’t take itself too serious, two, provides over two hours of action eye candy, and three, is a breath of fresh air in a time of cinema that relies on sequels that are inferior to its predecessors.  The sad part about “Rim” is that it will ultimately become a cult hit, which is odd for a film that cost upwards of $200 Million between it’s production and marketing, but that is what Guillermo del Toro films are; cult hits that delivers fan service up the ass, but just don’t make enough at the box office to call themselves “monetary hits” despite the fact that nearly all of del Toro’s films have been critically lauded (I’m not including “Rim” in that bunch because at heart it’s really just a bunch of dumb fun).

But what’s wrong with dumb fun?  I mean “Grown Ups 2” made nearly $50 Million in it’s opening weekend. “Grown Ups 2”?!  Really?!  A film that has plenty dumb, and I’m sure some people would say is “fun.”  And this isn’t going into an Adam Sandler rant.  I respect anyone that finds a niche and makes money off of it.  Del Toro has his niche, sci-fi and fantasy geeks, which are mostly single guys and girls between the ages of 18-35.  Seems like a solid demographic, right?  Not when you look at the ticket returns.  I can see “Hellboy” not making a ton of money.  It’s literally a fringe comic from Dark Horse that not many people would know about outside the comic book reading public.  “Rim” should appeal to EVERYONE who saw all three “Transformers” film as well as anyone who saw “Cloverfield” or “Independence Day” or “Godzilla” or I could keep the list going but I won’t.  My question is why didn’t this film get the love, and money, it deserves its opening week.  Yes, it’s the Summer and there are a lot of movies to see right now.  I’m not going to say they are good movies, but they’re movies nonetheless.  What continues to befuddle me is the movie-going audience in this day and age.  They will celebrate sequel after horrible sequel, but when something interesting comes their way with the same thing they are watching over and over, they dare not give it a chance?  Rant end, now let’s get to Grown U…..I mean “Pacific Rim.”

In short, “Rim” is about a war between humans and giant sea monsters.  These monsters, or Kaiju, are creating havoc within the ‘Ring of Fire” in the Pacific Ocean, decimating China, Japan, Australia, and the West Coast of the United States.  To combat this menace, the Jaeger Program was created.  A program comprised of giant robots piloted by humans, the robots, called Jaegers, hunt the Kaiju, engage them in combat, and most of the time defeat them.  Controlling the Jaegers requires a mind-meld between the pilots called “drifting” in which the pilots share memories, fears, and anger in order to fight better.  As the plot progresses we are introduced to your typical action movie archetypes; the loner with a past, the quiet girl that kicks ass, the grizzled guy in charge with a past, and your typical bad-ass roughnecks, but just become fodder for story’s sake.  The whole story leads up to a final confrontation with “a category 5 monster” and when all seems lost for humanity….well, I’ll stop there. 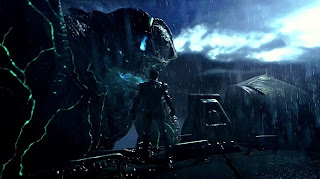 While acting isn’t it’s strongest suit, the camp element of robots fighting monsters makes the acting fit like a glove.  Even when Idris Elba gives his “Braveheart” speech, which is shoehorned in, I still felt inspired despite the fact I’ve heard the same speech in every sports film ever made.  Even though Charlie Day does his best Charlie Kelly the Scientist impression I still thought the character had a place in the film as a so-called “Kaiju groupie.”

Yes, we’ve all seen “Rim” before, just not all in one film.  del Toro, a master of genre film-making, borrows what he likes best from “Aliens” all the way to H.P. Lovercraft, and creates a cohesive film filled with colorful characters, locations, and amazing action set pieces.  There isn’t any new ground being broken which leads to my massive confusion of why this film isn’t getting the love it should be getting.  Are we going cold turkey on big-budget robot/monster beat-em-ups?  In the case of “Transformers”, I hope so, but not “Pacific Rim.”  There is a love and commitment to detail in “Rim.”  Keep in mind, this is the film that del Toro left “The Hobbit” for.  “The Hobbit,” a guaranteed, and critic proof, hit, was put aside so he could create a wonderful genre piece that is now being overlooked by audiences.

I could be getting ahead of myself.  Perhaps word of mouth will help “Rim” in the coming weeks and it’s box office receipts won’t drop off too much, but it’s Summer, where a film’s time to make a dent in an audiences’ wallet is limited, and it could be an uphill battle.  Regardless, the fact that “Pacific Rim” exists is a good for film.  It reinvigorates the “giant monster/robot” genre but it does it in a way that provides just enough heart and tongue-in-cheek fun where you wouldn’t mind seeing more Kaiju vs. Jaeger fist fighting.  For a fun time, check out “Pacific Rim.”

Fun Fact:  Having now appeared in five of del Toro’s films, this is the first film where Ron Perlman plays a human character, Hannibal Chau.