It would be such a beautiful thing to one day have Sony, 20th Century Fox, and Disney to all sit down, enjoy a beer and say, “Hey, let’s all work together and share these wonderful, and lucrative, Marvel Comics characters will own, and get Oprah rich!”

That will probably never happen, but being the optimist and a person who believes in the mantra “Money Talks, Bullshit Walks,” one day it will happen and we will see Spider-Man joining up with Wolverine to fight Hulk while the Fantastic Four are fighting Thanos while Galactus and The Watcher look on.  Sure, it’s going to take millions, if not billions of dollars, but the bottom line for studios is seeing their bottom line in the black.

Fox has a sordid history with their Marvel properties,  Sure, “X-Men: First Class” was a surprise hit, but there are more “Fantastic Four II:  Rise of the Silver Surfer” and “X-Men: The Last Stand” and don’t even get me started started on “X-Men Origins: Wolverine,” but that brings me to Fox’s latest X-Men offering, “The Wolverine” the redemption that Fox needed in order to gain momentum and hype for the much anticipated “X-Men: Days of Future Past” film in 2015.

Once again Hugh Jackman is back as Logan aka, Wolverine.  We pick up after the events of “The Last Stand” where Logan is living alone in the Yukon wilderness still haunted by visions of Jean Grey, whom he killed when she descended into the madness that was Dark Phoenix.  While in town to teach some hunters a lesson in proper bear disposal, he is confronted by Yukio, a young mutant with the power to tell the future, even though odd enough you never see her use her power, but she is a bad-ass with a samurai sword.  Yukio convinces Logan to come with her to Tokyo to pay respects to a man that he saved in the bombing in Nagasaki during World War II.  Sure enough, Logan is forced to embrace his savage nature once again fighting off Yakuza and members of The Black Clan (I wish they would have just used The Hand, but you take what you can get).  During the course of his Japanese vacation, Logan loses his healing powers, finds redemption, and fights Silver Samurai.  Not all fun in the sun for our hero, but for fan boys that follow the Chris Claremont/Frank Miller Wolverine Japanese adventures, you’ll probably geek out a few times.

This isn’t to say “The Wolverine” is without problems.  There are plot holes, characters that either go unused or underutilized, and in a few scenes some really bad shaky cam.  Being that this film was directed by James Mangold, who I have tremendous respect for, I expected some better camera work, but considering this is his first superhero movie, I’ll give him the benefit of the doubt.  Mangold is able to bring a good balance to this film by combining a lot of genre elements that work.  The allusions to ronins works really well in Logan’s case since for all intensive purposes he is a ronin; a man without a master who is forced to live forever and be on his own. 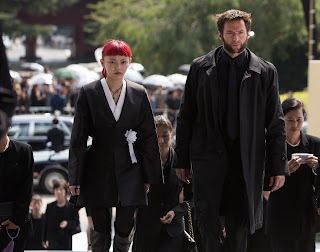 “The Wolverine” gives some extra depth to the character that “X-Men Origins” fumbled with.  We know that Logan is having a difficult time dealing with the death of Jean Grey while trying to create a new life in Japan with another woman.  We also see his struggle with trying to keep his feral side contained while also dealing with the lose of his biggest mutant asset; his healing factor.  But the loss of his healing factor makes him feel something he’s never felt before; humanity.  Logan has never had a fear of death due to his mutant ability and for the first time we see a vulnerable super hero who is trying to build a new life in a foreign land.  Hugh Jackman, who I give tons of credit to for returning time and time again to portray Wolverine, gives a nuanced yet complicated performance this time around.  Jackman was born to play Logan, just like Robert Downey Jr. was born to play Iron Man, and his love for the character really shines through this time around, and that’s not to say it didn’t in “X-Men” or X2: X-Men United” but “The Wolverine” lives up to it’s name and you get wall-to-wall Wolverine from the get-go.

With “The Wolverine,” Fox finally seems to be getting back on track with their super hero/X-Men properties.  Of course it takes more than just one movie to settle a fan-base down, and while “First Class” was a solid start and “Wolverine” continues the trend, “Days of Future Past” is a huge gamble and the “Fantastic Four” re-boot is still developing.  The problem with studios that own Marvel properties aside from Marvel Studios themselves, is lack of long term awareness.  For Sony and Fox it seems to be more of a cash grab than giving the source material a chance to shine, or simply bastardizing the source material to appeal to tweens, case in point “The Amazing Spider-man.”  With “Wolverine” Fox took a chance and told an X-Men story that not many people outside of the comic book reading community would know, and judging by the box office in the first week, both domestic and foreign, the film is being received well.

I’m not going to say the “Marvel Studios Method” was used for “The Wolverine” but the fact that source material was used in an effective way while adding to the X-Men mythos while prepping for the most ambitious X-Men film to date, it finally seems like Fox has a game-plan.  Of course it’s not as ambitious as what Marvel Studios is doing, but its a hell of a lot better than Warner/DC.

Fun Fact:  Wolverine’s first appearance was in The Incredible Hulk #180.