As the Summer movie season winds down, we start to enter this zone of thoughtful Summer fare where the lines are blurred between balls-to-the-wall action and films with a message.  When Fall movies begin to roll out in the next month or so we’ll start to see legit Oscar contenders and not as many giant-robots-punching each-other-in-the-face films.  It’s the natural order of things.  This brings me to “Elysium” a solid, yet heavy-handed, sci-fi epic from “District 9” director, Neill Blomkamp.

“Elysium” is the story of Max Da Costa (Matt Damon) a former car thief who now works for Armadyne, an infrastructure/munitions manufacturer for the aforementioned city in space.  An accident at Armadyne forces Max to seek the help of local hacker and gangster, Spider, who offers him a way up to Elysium if he puts on a metal exoskeleton that resembles what Mickey Rourke was wearing in “Iron Man 2.”  Political intrigue, exotic sci-fi weapons, and weird accents are the highlights of “Elysium” which is a little ham-handed with the way in which it deals with class issues and immigration, but at least one movie this year will call out the elephant in the room we are all dealing with as a global society these days.

Coming from a middle class family and living a middle class life, I know the class gap is widening even as I write this sentence and who knows, one day there very well might a space station where all the rich One Percenters live, while the Earth degenerates into a cesspool of crime and poverty, hey, have you seen Detroit lately?

The one problem ‘Elysium” definitely DOESN’T have is how it looks.  This broken vision of Los Angeles looks beautiful, on par with what Alfonso Cuaron did with London in “Children of Men.” The world looks lived in and is populated with actual people, not CG fill-ins.  The fact that Blomkamp decides to shoot scenes in actual trash heaps and squalor shows his dedication to his world and how he intends on making it look. You feel gritty and grimy on your time on Earth, but funny enough, that grim and grit carries over when you visit the world of Elysium.  Despite it’s pristine surface, there is a rotten underbelly to the wealthy off-planet with it’s ID-scarred citizens and the use of primitive looking robot helpers offering cocktails and Hors d’oeuvres.  There is something off-putting about Elysium, but at the same time you have to ask yourself; would you prefer Elysium to Earth?  I think most of us would sympathize with the citizens of Elysium, who seem to be under attack a lot, even though these people were likely the cause of the Earth’s plight in the first place.

The acting is solid in “Elysium” with Matt Damon leading the way.  But the real revelation is Sharlto Copley, who plays Kruger, a sleeper agent for Elysium’s Secretary of Defense, played by Jodie Foster.  Copley plays a villain with deranged glee, almost of the level of Heath Ledger’s Joker in “The Dark Knight.”  Kruger is built up as a psychopath, which fits the bill nicely based on his enjoyment in his job, namely killing immigrants without a second thought.  But there is a certain mystery and sadness behind his eyes.  Was he a psychopath before he was made a sleeper agent or did years of death and Med-Pod treatments warp his mind into what we see on screen.  I’d love to see a prequel with just Kruger. 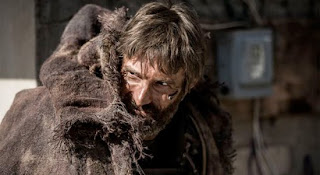 Speaking of Med-Pods, this brings me to another important aspect of the film; healthcare.  In the time of “Obamacare” and free healthcare for all citizens, at what cost could free healthcare mean for us as a society.  Yes, we all love free, but when government is in charge of what we put into our bodies just because it’s free, is it plausible to believe that something could go bad.  Most of the citizens of Elysium seem to be in a haze, almost dead from the outside, as they live their carefree and safe lives.  Could too much exposure to medicine and these “Med-Pods” cause some long-term damage, and psychosis?  Take Kruger as an example.  In his line of work I’m sure he’s met plenty of bullets, knives, lasers, and grenades where he’s had to make some pit stops into a Med-Pod.  The “free” healthcare could have some side effects, couldn’t it?

This is just me reading in-between the lines, and who knows, this could just be be preaching at this point as well, but Blomkamp has said, quote, “No, no, no.  This isn’t science fiction.  This is today.  This is now.”  Now who’s preaching. 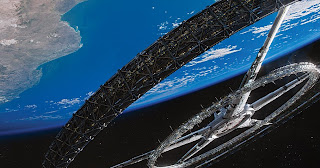 Bottom line, “Elysium” is a step in the right direction for “intelligent sci-fi,” but with films being a medium for escape, especially during the Summer time, it’s odd to see such a preachy film in August.  However, Blomkamp raises the question(s) as to what should we need to do in order to stop this potential future only 140 years away.  Are we doomed to live on Earth while the most wealthy skip town and leave us the scraps?  If Blomkamp is the minister to this sermon, we should listen up, but still keep an open mind and hope that there is still some humanity left in our future.