The Last of Us – Blurring

With the next generation of gaming consoles on the horizon, the line between video games and film continue to blur.  Developers are creating one of a kind experiences that not only immerse you in a world, but give you direct rule over it.  You are building a direct connection with the environment and characters that you are in charge of.  What a wonderful world we live in where you can escape for hours on end and feel something, just like you would during a feature length film.  One of the best video game storytellers for the best part of a decade have been from Naughty Dog Studios, between their “Uncharted” series and now their newest exercise in high art, “The Last of Us.”  A tour-de-force in emotion, storytelling, and a glimpse to where the video game is heading in the future.

You might ask yourself; “Why are you reviewing a video game for a site where you concentrate on films and TV shows?”  I’ll answer your question with a question, “Why the hell not?!”  If there was ever a game that needed to the mentioned in the same breathe as a film in recent memory, it has to be “The Last of Us.”  The production value is off the chart, better than most recent major Hollywood pictures in my opinion, the story is cohesive, once again, better than most Hollywood films, and most importantly, you care what happens to the characters.  You forge a bond with the protagonists, you want them to succeed, and at the same time, you fear for their safety when you aren’t in control of them.  When the stakes are at their highest for both Joel and Ellie (our main protagonists) you hold your breath and hope for the best, but expect the worst.  It’s an interesting thing to feel while playing a video game, where at the end of the day, there are no stakes, it’s just a game.  But that is where “The Last of Us” expertly blurs the lines between fantasy and reality. 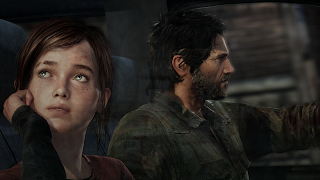 “The Last of Us” begins with a flashback, where we meet Joel and his daughter.  Joel seems like a regular working stiff trying to provide for his daughter in a small Texas town outside of San Antonio.  Tragedy strikes and we fast-forward 20 years later where Joel is now living in Boston.  In the 20 years since “a giant pandemic” many citizens now live in towns under martial law.  Joel is soon enough brought into a mission to transport a young girl named Ellie across the U.S to a group calling themselves “The Fireflies” who are researching a way to cure the deadly disease that turned the world upside down.  The journey of course isn’t easy as Joel and Ellie are tasked with fending off looters, cannibals, military, infected humans, and “Clickers,” which look like humans with mushroom heads.  You’ll meet other characters along the way who are fighting for their lives, or trying to rebuild a society that crumbled two decades ago.  There are plenty of tense scenes where tragedy could occur, and usually does, at any moment and that just ratchets up the stakes for our heroes.

From a mechanical perspective, the controls respond fluidly, the inventory menus are brilliantly designed so that the action never stops, a-la the “Dead Space” series, which adds a certain amount of strategy during firefights and while being perused by Clickers.  Everything just works perfectly together and coupled with the amazing visuals and impressive story-telling, it’s a game experience that will be remembered alongside the first time you played “Super Mario Bros.” “The Legend of Zelda,” or any other game that you would consider timeless.

The game ranges from beautiful to tragic, calm to nerve-wrecking, and the use of the seasons as chapters gives the game a novel-like feel.  With inspiration from the likes of “The Road,” “Children of Men,” “Night of the Comet,” and “28 Days Later,” you feel in control of a Hollywood film from beginning to end.  This is clearly where the action-adventure genre for video games is headed, and that’s a good thing.  “The Last of Us” tells a human story of survival, trust, betrayal, and leaving behind the past to embrace an uncertain future in a world where danger lurks around every corner.

Fun Fact:  It’s heard to believe that Naughty Dog, the studio behind “The Last of Us” got started with “Crash Bandicoot” the cute marsupial that became Sony’s version of Mario.  Except for the mustache.