Naturally it would make sense to review the first “Phantasm” before I get to it’s sequel, but there is a logical explanation; I simply enjoy “Phantasm II” better than it’s predecessor.  An odd way to begin a review, I’m sure, but I just wanted to get the semantics out of the way before I get into this review.  Welcome back to October, and an entire month of scares, frights, masks, blood, gore, inferior sequels, and more blood.

“Phantasm II” is the 1988 sequel to the 1979 cult classic, “Phantasm,” written and directed by Don Coscarelli.  If you’re unfamiliar with “Phantasm” here is a quick refresher; A kid named Mike begins experiencing strange happenings around his town, with a sinister figure called The Tall Man behind said happenings.  As things begin to reveal themselves Mike finds himself stalked by The Tall Man in nightmarish visions involving corpses, metal flying balls with a taste for blood and a body full of embalming fluid and dwarves created from the reanimated corpses of the town’s dead.  Throw in a Bruce Campbell look-a-like named Reggie, and you got yourself “Phantasm.”

The sequel picks up right where the original leaves off, so for the purposes of this review, and if you don’t want to be spoiled, even though these would be 34, and 23 year old spoilers, respectively, tread lightly.  Mike is about to be taken away by The Tall Man but is rescued by Reggie.  We skip ahead roughly 10 years to an adult Mike who is being released from the local mental hospital.  After tragedy besets Reggie, the two spring into action to track down The Tall Man and end his reign of terror, forever.  Joined by a young girl, named Liz, with a psychic link to Mike, the trio head out to, once again, stop The Tall Man’s devious plans, including the creation of more zombie dwarves and to rescue Liz’s grandmother.

What I love about “Phantasm II” is the excess.  You can see clearly that the sequel takes a lot of it’s cues from another famous cult classic sequel; “Evil Dead II: Dead By Dawn.”  While the original “Phantasm” relied on real scares and it’s tone to convey a feeling of dread, just like “The Evil Dead,” it’s sequel relies on banter between Mike and Reggie and a lighter tone, which includes a chainsaw fight and the creation of a quadruple shotgun, smells like “Evil Dead II.”  Consider the time frame between all the films as well.  “Phantasm” was released two years before “Evil Dead” and you can see some similarities in the tone, but that was also the sign of the times in the late 1970s and 80s.  Fast-forward to 1987, when “Evil Dead II” is released with a more comedic tone, and a year later “Phantasm II” is released with a lighter tone as well.  I’m not saying that “Phantasm” and “Evil Dead” share much with one another, but in comparing the two, you can see where there are similarities and the fact that each franchise borrowed a little from one another. 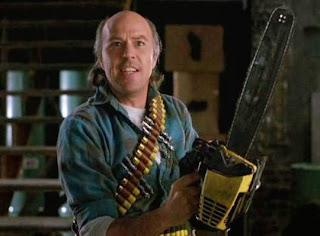 Now back to the “Phantasm II.”  I’m sure purists who love “Phantasm” will kill me for saying the sequel is superior, and I’m not actually saying that, I’m just saying that “Phantasm II” is more accessible for non-fans than the original.  Just as he was in the first film, Angus Scrimm literally stands out, again, as The Tall Man, the series’ main antagonist.  While The Tall Man never received the fanfare of Jason, Freddy, or Michael Myers, there was still something very creepy about an old supernatural man who steals corpses to create evil dwarves.  I liken The Tall Man to Henry Kane from the “Poltergeist” series as they both share a similar, skeletal look.

Like most sequels in the late 1980s, there is an extreme case of style-over-substance in “Phantasm II” with more special effects, spotty acting, and plot holes big enough to throw a million of those killer metal balls into.  However, the cheese doesn’t take away from the fun.  There are some excellent creature effects, done by a than relatively unknown Greg Nicotero and Robert Kurtzman, now of “The Walking Dead” fame.  And of course, it’s no surprise that Nicotero also did effects on “Evil Dead II.”  The comparisons continue!

While not exceptional, “Phantasm II” is a fun little sequel that lives in the zeitgeist of horror during the late-1980s.  It’s over indulgent, silly, campy, and not as good as it’s original.  But, it gives horror and gore fans what they wanted; MORE!

Fun Fact:  For even more The Evil Dead/Phantasm fun, take a look at one of the bags an undertaker is filling up and you might catch the name on the name.  That name being Sam Raimi.  Meta!!!!