I never start a review this way, until now of course; “Gravity” is amazing, emotional, groundbreaking, revisionist, wonderful, innovative, and of course, mind-blowing. There hasn’t been a movie since “2001: A Space Odyssey” that has elicited so many emotions over the course of 90 minutes until “Gravity.”  If the genius of Alfonso Cuaron hasn’t been noticed yet, this is the film that puts him in the lexicon of Spielberg, Lucas, Kubrick, and other luminaries that have re-defined cinema for a new generation.  Cuaron is this generation’s Stanley Kubrick.

“Gravity,” at heart, is the tale of survival, redemption, and the power of belief.  Most of Cuaron’s films all have an undertone of hope found within utter despair, see “Children of Men as a prime example.  Sandra Bullock and George Clooney star as Ryan Stone and Matt Kowalski, respectively, two astronauts on a routine mission to repair a shuttle.  Before you know it the two are adrift after space debris strikes the shuttle, and a battle for survival begins.

While I was in the theater so many emotions came over me.  Based on the trailers, you know shit is going to hit the fan, but I didn’t know the context in how said shit hits the fan. The set pieces are wonders to behold, and while CG is heavily relied upon, I never felt that I had to suspend my disbelief and realize that all I was watching was make believe.  Cuaron has officially blurred the lines between reality and fiction.  I was blown away.  Add in his trademark long takes, the first scene lasting roughly 15 minutes with no cuts, and you are sucked into this vision of space that hasn’t been seen since “2001.”

While I’m not going to say politics were involved, it’s interesting to see three superpowers (USA, Russia, and China) mentioned in a film about space and how one said superpower is to blame for the problems that occur throughout the film.  I’m not saying the Cuaron has an agenda, but it seems clear that he either has a distrust or distaste for the the Space Program, or perhaps his entire allegory in “Gravity” is that the Space Program is dead or needs to die.

There are quite a few references to death and rebirth in “Gravity.”  One is pretty clear, where, SPOILER, Bullock enters the International Space Station, strips her suit off, and curls into a fetal position.  After being in the vacuum of space for a long time, she finally has a place to feel safe, and regresses into a child-like position of safety.  Later on in the film we pretty much see the death of the Space Program, with once again, SPOILER, a US, Russian, and Chinese space module destroyed, with the latter plummeting to Earth.  Is Cuaron saying, “Look, space doesn’t want us anymore, it’s time for us to return to Earth and take care of things domestically before we deal with the vastness of space.”  I tend to think this is a very important, and timely, message for people all over the world. 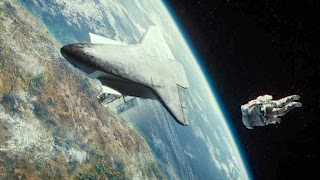 For over 50 years, the world has been obsessed with visiting space, “landing” on the moon, visiting Mars, sending probes to the far recesses of the solar system, while the Earth continues to become over-populated, natural resources are slowly running out. climate change is a creeping death, and pollution chokes us.  Why is the space program a viable option anymore?  Yes, we use satellites for communication and surveillance, but why do we need to keep sending probes into space to hopefully meet E.T?  With NASA finally ending their Space Shuttle Program in 2011, “Gravity” tells us two things; good riddance to the program, and two, lampoons the program with the disaster that you see in the film.

Politics aside, “Gravity” is a technical marvel that lets us experience space from a perspective we’ve never seen, before in a realistic way.  Should you see it in 3-D?  My answer is always no to 3-D.  People might argue that it puts you INTO the film, but why do you need to be in the film when you can watch the film in
2-D and still feel like Cuaron is holding you hostage for 90 minutes, and that’s a compliment to the director.  I haven’t felt at the mercy of a director in a long time, where you can’t escape what you’re experiencing until the director lets you go.  If “Pacific Rim” was the action film you couldn’t take your eyes off of, “Gravity” is the mind-blowing, technical marvel that you can’t take your eyes off of this year, and maybe the past decade.  “Gravity” pulls you in, literally.

Fun Fact:  Ed Harris, who you might remember as Flight Director Gene Kranz in “Apollo 13,” reprises the role, in voice form, of “Houston” in “Gravity.”

This Is Halloween: Scream 2