Certain things sell me on a film, especially a horror film.  The main thing(s) is whether it keeps me interested, engaged, and I’m able to care about a few of the characters.  You wouldn’t normally say that a soundtrack for a film is what made you like the film even more.  However, “Scream 2” is that type of film, an outlier where the soundtrack is as good as the film itself.  But of course there is an excellent movie hidden behind the soundtrack.

“Scream 2” the first sequel in the popular “Scream” series is “The Godfather II” of the horror genre.  Not only is Wes Craven back, with Kevin Williamson penning the screenplay again, but Craven ups the ante and creates a sequel that provides more laughs, more tension, and an even hipper cast than the first film, including Raylan Givens.  Once again we start with a sequence that later in the series becomes standard protocol where a famous person(s) that you wouldn’t think would get killed, gets killed.  Meanwhile, Sidney Prescott, our heroine in the previous film, has gone off the college where she’s followed by Ghostface.  But wait, you might say, “Wait a minute, Ghostface is dead, that was Billy Loomis and his buddy Stu!”  I would rebuttal and say, “You know what would have been cool, if Ghostface Killah played Ghostface!”  I still say we get that petition signed and just cast “Scream 5” with everybody from the Wu-Tang Clan.

While Sidney is trying to adjust to college life, a new boyfriend, and playing Cassandra, her friends are killed one at a time by Ghostface, who just LOVES sequels; they’re bloodier, sillier, and have ridiculous plot twists.  While “Scream 2” is all of this and more, the fact that it’s self-aware without being fully self-aware works extremely well.  The characters never follow their own advice even though they try to justify their decisions for being the typical horror stereotypes.  Just like the first “Scream” the characters are likable and are typical of the slasher genre, but Craven and Williamson do a great job of expanding the world of Woodsboro from it’s small town beginnings in the first film, to a college campus where there is a larger group of suspects in a more condensed, claustrophobic area. 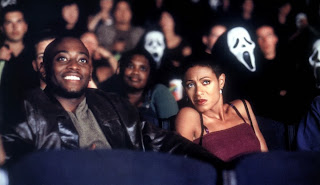 Now, let me get back to the real reason to like this film; the soundtrack.  If you haven’t enjoyed the “Scream 2” soundtrack, do yourself a favor and give it a listen.  The tracks range from Master P to Dave Matthews Band, but I still think there should have been some Wu-Tang on the soundtrack, it just seems like a lost opportunity.

Overall, “Scream 2” would have been a great way to end the series, but what would a horror series be without a few more sequels, which we got with the underwhelming “Scream 3” and the underrated “Scream 4.”  However, “Scream 2” stands alone as a horror sequel that not only meets a fan’s expectations but was so much more than a cooker-cutter sequel to make more money.  While Wes Craven’s record as a horror director had been spotty since “A Nightmare on Elm Street,” the “Scream” franchise gave him a second lease on life, and “Scream 2” stands as one of his best efforts in a career that spans over 40 years.  An outlier indeed, “Scream 2” gives you what you want, but it gives it in a way where excess isn’t required.

Fun Fact:  As if there wasn’t enough to like about “Scream 2,” Danny Elfman, composer of “Batman,” “Spider-man,” and former lead singer of Oingo Boingo, took the time to compose the Cassandra theme heard HERE for the film.