I hate to be so cliche when it comes to “The Shining” but since I like it not only as a horror film, but as a film in general, it’s hard not to call it iconic.  It’s the first film in the pseudo-slasher genre that was taken seriously by not only horror fans, but film historians and pundits.  I mean Stanley Kubrick directed it for goodness sake!  One of the most important directors in the past 75 years chose to follow up his epic “Barry Lyndon” with a Stephen King adaptation.

While I’m too young to have gotten the chance to experience this film in the theater during it’s initial theatrical run, luckily “The Shining” was being screened during one of Cinemark Classic Series months.  Myself, and two friends, got the chance to experience the way all film should be witnessed; on the big screen.  While I don’t fully agree with complete restoration when it comes to old films (I still like to see the cracks and film burns when I’m watching something that was actually shot on film as opposed to digital) the job they did on “The Shining” to clean it up and and preserve it was well done and didn’t take away from it being scary or it’s overall tone.  Another cool thing that I noticed was the night we watched the film, October 30th, was the same day in which The Overlook Hotel closes for the Winter in the film.  Eerie and awesome.

As a refresher, “The Shining” is based on the 1977 novel by Stephen King about a possessed hotel, The Overlook, and the Torrance family, who become it’s latest victims.  I highlight based because when “The Shining” was released it did not receive a seal of approval from King himself, who dismissed it and still holds it as one of his least favorite adaptions of his works, and there are many changes from the book to the film. The film features Jack Nicholson in the starring role as Jack Torrance, and former school teacher with a violent past who struggled with alcoholism.  Looking to get away and start a new writing project, Jack accepts the caretaker’s job at the Overlook Hotel deep in the heart of the Rocky Mountains.  With his wife and son in tow, the descent into madness begins. 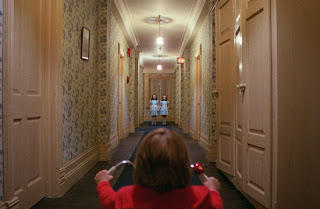 Straying from King’s novel, Kubrick creates an original take that I think works very well.  The film becomes less about the supernatural and more about the breakdown of the psyche when isolated and away from society.  While the film does keep important elements, such as Danny’s ability to “shine” and the horrors in an infamous hotel room (Room 237 in the film, and 217 in the novel), the ending and what role Jack plays in the hotel’s lurid history is a little more vague.

Kubrick, who was known for his introspective films about the human condition and what drives man to his actions, creates a Jack Torrance who always looked like he was about to break from the very beginning. While the novel portrayed Jack as a sympathetic character come the end of the story where he saves his family from the ghosts of the Overlook, there is no redemption in Nicholson’s take on the patriarch of the Torrance family.  Can you chalk that up to Nicholson’s look?  Maybe.  He always looks manic so you knew his take on Mr. Torrance was going to be manic and unhinged. 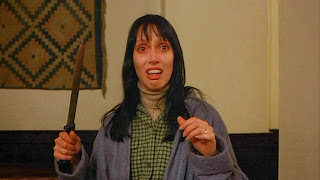 Two other things I took away from this viewing of the showing was something good, and something not so good.  The good; The score.  Holy crap, but this score is relentless and puts you on edge nearly the entire film.  It’s a driving score that is the heartbeat of the horrors to come.  Listening to it in surround sounds simply puts shivers down your spine.  The bad?  I’m sorry, but for the most part, the acting is pretty lackluster.  Sure, it was 1980, and it’s a horror film, but goodness, Shelley Duvall and Scatman Crothers put forth some Razzie-worthy performances.  On the other hand, while Nicholson’s performance is over the top, it’s still haunting as a man who is succumbing to his own demons as well as the ghosts in the hotel.

As iconic as “The Shining” is, there are still problems with the film.  People have pointed out spacial issues with the hotel that make no sense, the fact that the Torrances had a lot of luggage to put into a small sedan, and other assorted things that simply didn’t add up, but I think the reason why a lot of people overlook those irregularities was the fact that Stanley Kubrick was directing, and no one argues with Kubrick.  There’s also the fact that this was a horror film and perhaps Kubrick was pointing out the silliness of horror films and the inconsistencies that all films of the genre possess.  Maybe that’s reaching a little bit, but I wouldn’t put it past Kubrick to create a parody of the horror genre before the horror genre had become a parody of itself.

Overall, “The Shining” stands the test of time, and aside from the silly clothes that most of the characters wear, the film is pretty timeless.  It takes a classic haunted house film, adds the creepiness of King, and incorporates the psychology of Kubrick, a combination that adds up to a horror film that is a cut above the rest.

Fun Fact:  Do you think you know what Kubrick was “really” trying to say in “The Shining?”  Check out “Room 237,” a documentary about the “true” meanings behind “The Shining.”