*Special thanks to Ganko Films for providing Simplistic Reviews with a screener to watch the film “Phantom.”*

What is a phantom really?  Is it from the opera?  Is it something that Ben Affleck has to fight?  Or is it a superhero in a purple suit that punches criminals with a ring shaped like a skull?  I mean, you could be right if you guessed any of these, however, there is a deeper meaning behind the word phantom.  In the appropriately titled film “Phantom” from director Jonathan Soler, the question is asked;  “Are we all phantoms of this world, and do we simply go by living without a trace to others around us?”

“Phantom” is the story of a Japanese couple having a late night conversation about life.  Neither character has a name, which reinforces the “phantom” concept in the film.  None of their conversation happens in dialogue, but rather in narration which deals with everything from not having enough money to pay rent, to moving back in with a parent to, yes, farting.  Scenes seem to be played back in forms of flashbacks, done in a very art-house style.

There are numerous themes in “Phantom” namely loneliness, self-doubt, and the concept of relying on another person for support.  Both characters are comfortable around each other and share doubts and fears, the female character more so than the male character.  As their conversation escalates, more philosophical elements come into play.

The female character references the work of Fumiko Hayashi, namely her work “Horoki” a female coming-of-age story which was later adapted into the anime “Wandering Days.”  Would I call “Phantom” a feminist film, not really, but rather I think it deals with the theme that women have it harder in Japan, which is largely a society run by men with women acting in the subservient role.  The male character is a little more oblivious to this concept as he tries to tell her that she can do anything, which shows his nativity to a women’s plight in Japanese culture.  Granted, it’s much better for a women in Japan than it was 100 years ago, but it takes a while to break boundaries and taboos that women are equals in a male dominated society.

Another reference is made to “Kanikosen,” a book about the hardship of Japanese crabbers and their struggle against exploitation.  With young people these days taking any job, which might be well  below their education level, you can see how this book would have an affect on any young person who thinks they are being taken advantage of in hard economic times. 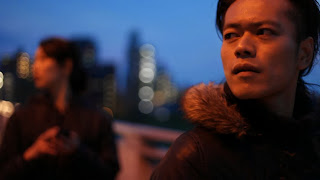 The other important element of “Phantom” is the conversation of being a ghost versus a phantom.  When you think of ghosts, you think of people that have died, but continue to inhabit a material world. A ghost leaves it’s mark and continues to live, at times interacting with the living, depending on who you speak to.  A phantom, on the other hand, can be a spirit that still inhabits the living realm, but no one is aware of it’s presence.  This is the plight of our two central characters; they feel like they are being ignored from a societal perspective and are invisible to the world, and aren’t leaving a mark.  With a global economy still reeling, it’s easy to get lost in the shuffle, and with more a more college graduates without jobs and burdened by debt, it’s becoming harder to leave a mark.  Sure, you can take out more loans to do what you really want to do (the female character mentions that she wants to open a bar), but it’s a scary proposition to someone who lacks the self-confidence, and more importantly, money, to make their hopes and dreams come true.

Overall, “Phantom” is an interesting exercise.  It’s shot in a dream-like way with plenty of sub-text about the living poor and a disenfranchised youth that isn’t limited to Japan.  The two actors, Yuki Fujita and Masato Tsojioka, give convincing performances as two people who trust each other and are each other’s support structure, but the acting looses something when all the dialogue is done as narration.  It’s interesting and reinforces the concept of being lost, but it becomes distracting throughout the entirety of the film.

Soler has a good eye for finding something out of nothing.  His vision of Japan is interesting as it focuses on things that I’m sure many Japanese take for granted during their daily routine.  The mundane if you will, that we often overlook.  I’m not a Japanophile by any means, so I’m sure that many of the shots have more meaning, but at times it seems like art, for art’s sake.  Will “Phantom” start a revolution?  Probably not, but looking at it from a Western perspective, I believe it captures universal angst for most young people who are trying to be heard in a world that has it’s ears plugged.