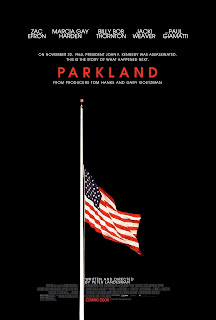 Parkland is one of those films you hear about then count till the day it comes out. It peak my interest mostly due to the event this film takes place on. I’m talking about the assassination of John F. Kennedy. The assassination has always been an interest of mine for awhile now because I’m the history type of guy and not a conspiracy type. Every 22nd of November I sit in front of my TV and binge watch.

So how does this film work covering the events that took place on that day? Well it’s kind of…

Let me try and explain. If you wanna watch a good movie about this part of history watch Oliver Stone’s JFK. Parkland is really, well suppose to be about the events at the Hospital Kennedy and Oswald where taken too. Yes in the beginning we get that, but then it begins to explore Zapruder, we shift to Robert Oswald and his mother, The Secret Services agents, The Reporters and then back to the hospital. Now maybe the writers thought this was a good idea to do a film about the hospital and not the same old format. But that’s not really how it played out. Did they say, “Shit we don’t have enough material to do just the ER.”

The synopsis to this film is  “A recounting of the chaotic events that occurred at Dallas’ Parkland Hospital on the day U.S. President John F. Kennedy was assassinated.” But most of the film is about Zapruder and the Oswald family. Yes that was very well done and in fact both of those parts are the best in the film, but I was expecting a whole ER film with a few drop outs in setting but not a bookended film with no care toward the only parts this film was made about.

Abraham Zapruder was played brilliantly by Paul Giamatti. He is my favorite thing of this whole film. Ron Livingstion who is always great and James Badge Dale who really stands out in this film as one of the only actors seemingly entertaining to watch. Marcia Gay Harden, David Harbour, Billy Bob Thornton, Tom Welling, Mark Duplass, Colin Hanks, Jackie Earle Haley and Jacki Weaver all are included in this mass of who can we fit in here for a kinda cameo. That’s what it really felt like. Was it bad? No just a bit too much I think. Then we have the top billing of Zac Efron. I’ve never watched that much of his work but ouch he seems to try way to hard to not be that Zac Efron. He just plays a guy we as a viewer should care about but instead we go hey you look like, right your that Zac guy. Hey he might be a nice guy, I really don’t know or care but you need to tone it down a bit. For the charactor we should care about I honestly could care less about.

This film isn’t what I was told it would be. It was good at a few things including a nice looking production, with a real time period look to them. Solid acting, here and there. And a film that even though a ton of information is missing, including that of not including John Connally who was at the same ER and in the same car as JFK. So yes the film is weak, worse in some areas but overall a messy mess.