Once again Simply Anime is BACK with another healthy does of animated goodness. Your featured show this time is Kill la Kill. This has been a show that I’ve been meaning to watch for a while but procrastinated on starting because, I can be a slacker from time to time. I’d first heard about Kill la Kill in class last semester. I was doing a group project with some really cool people and a couple of them were into anime. During our time together we’d attempt to have spoiler free conversations about Naruto Shippuden (mainly because we were all at different places in the show), anime we were currently watching, or ones that were about to start. During a conversation my friend Rod introduced me to Kill la Kill. He told me that it was directed by Hiroyuki Imaishi and written by Kazuki Nakashima. They are the team behind the fan favorite mecha anime Gurren Lagann, so I was instantly intrigued. He quoted lines from the show during conversation and they were pretty damn fresh. So when the semester ended I “vowed” to start Kill la Kill over winter break.

However, I didn’t start the show straight away (remember slacker tendencies). While I wasn’t watching, I’d hear yet another overwhelming endorsement for the show. This time it would happen while hanging out at, A Comic Shop(the best comic shop in Orlando hands down, in my opinion). As my buddy Oral and I were going on about animes, other people causally joined in our discussion. As fate would have it, Kill la Kill was brought up and with rave reviews. Now let me say for the record, in addition to occasional fits of procrastination I have also been known to possess contrarian tendencies from time to time. So, if something is overly hyped, my tastes may not align with popular opinion. That being said, the level of excitement about this anime was not a turn off. So when I got home, I watched the two previews that were available on Crunchyroll. They were two high octane trailers that piqued my interest and were chalked full of good music. So based off the strength of the creative team and the previews, I began Kill la Kill.

What I’ve enjoyed so much about Kill la Kill so far is that it takes some familiar concepts, at least from a comic book perspective, and presents them in a way that I think will be fresh to Western fans. In addition to it’s unique story, much in the way that Gurenn Lagann was very different from other mechas because of the way in the robots were designed, and Kill la Kill is also equally unconventional in character design and animation style. The team’s previous work did not showcase conventional designs, (well, as conventional as a giant robot can be) but in spite of that, it never hurt the intended tone and was complementary to the story being told. Thus it superseded any personal issues someone might have with robot design or animation. The same can be said of Kill la Kill, which again uses a non-traditional style to tell it’s story. Fair warning though, it can occasionally be a little high on fan service. Now that we’ve gotten that out of the way, here’s what you need to know.

In this story’s universe clothing is the key to ultimate power. It can grant the user enough power to defeat all their enemies and also the power to rule the world. The key to creating these powerful articles of clothing are “life threads”. They can imbue the wearer with extraordinary powers. Because clothing made with life threads can grant the user supreme power, who makes the clothing is a matter of life or death. Such is the case for Ryuko Matoi. We follow her on a quest for answers about her estranged father’s murder. A journey that brings her to Honnouji Academy, a high school set in the middle of a post-apocalyptic Tokyo. The school’s leader is the cold and ruthless Satsuki Kiryuin. Her word is law and it is enforced by her generals, the Elite Four. The school as well as the city have been divided into a cast system in which a student’s membership and position in it’s clubs determines not only their place within the halls of Honnouji, but also their family’s position in life. Club members are issued “Goku uniforms“, life thread enhanced uniforms that gives the user superhuman abilities. Each uniform has a star ranking, from 1 to 3 (which also signifies the number of life threads woven into the uniform). Therefore, the more stars on your uniform the more powerful you, and also the better off you live. So being a student that is not involved in clubs will mean that you are a “no star” student and relegated to living in the slums. When Ryuko arrives at the academy, she demands answers and it not afraid to shed blood to get them. Armed with one half of the scissor blade she found impaled inside of her father, Matoi takes on the school boxing club leader of the adorned in a two star uniform. The fight does not go well and she is forced to retreat to her destroyed family home. It is there that her fate changes. Dropped into a pit, she is seemingly attack by a symbiot made completely of life threads. (To put it in terms that may be a bit more familiar, a symbiot is just like the living costume Spider-Man got from space). The results of union between Ryuko and Senketsu (the symbiot whose name means “Fresh Blood”), is a journey of self discovery, and ultra fun action sequences. Together they battle their way through Honnouji Academy’s litany of clubs, the Elilte Four, and Kiryuin herself.

What I like most about this show so far has been that, each character’s motivations are revealed, so for instance you get to see why there is such fierce loyalty to Kiryuin from her generals. You will have to get used to the fact that every episode uses the back drop of clothing and tailoring methods as a plot device. It doesn’t hurt the story in any way but it is revisited often throughout the series. One of my favorite episodes so far is episode 7 “A Loser I Can’t Hate”. This episode in particular was one of my favorites because it is about the cast system that I spoke about earlier, and how becoming a part of the system comes at a cost. After a while, you may notice that the fights can be formulaic, but to me in television everything has a formula and if you pay close enough attention you’ll notice it. Now as I prefaced earlier this show can also be a little heavy handed on the fan service. 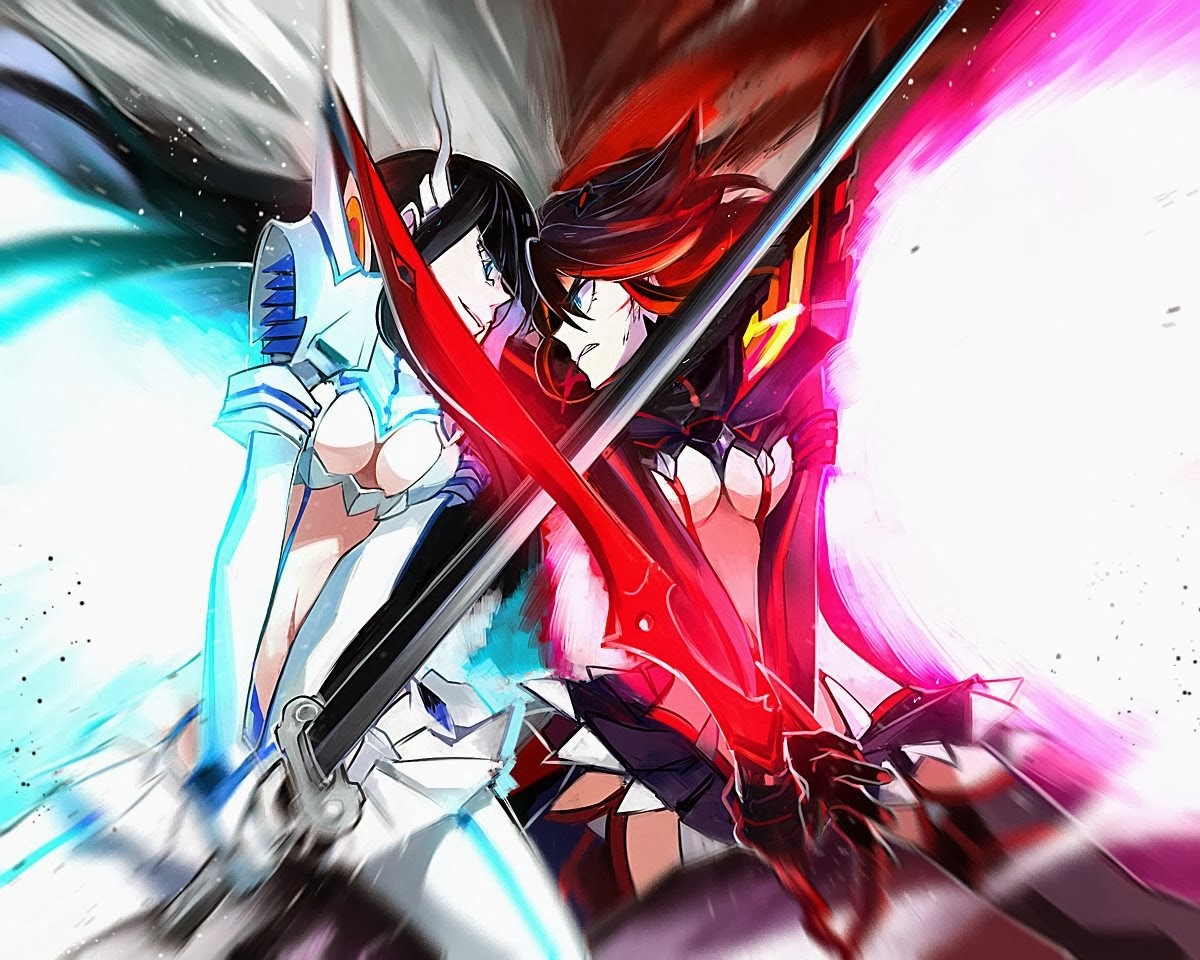 Don’t let the scantly clad females in sailor suits completely turn off though. These are strong female leads, and the story is compelling enough to keep you hanging on. Besides; costumes, do not a story make. BUT, if they are that much of a distraction, or perhaps its a bit too much for you to handle, I could always introduce you to something less racy like Kipper the dog. For those willing to give it a go, you’ll get swords, symbiotic sailor suits, a secret faction of rebels called NudistBeach and a dystopian world who’s fate appears to be in the hands of a teenaged girl. Kill la Kill is fun series, and with only 15 episodes (so far) you can start now and enjoy the ride, but you don’thave to take my word for it.