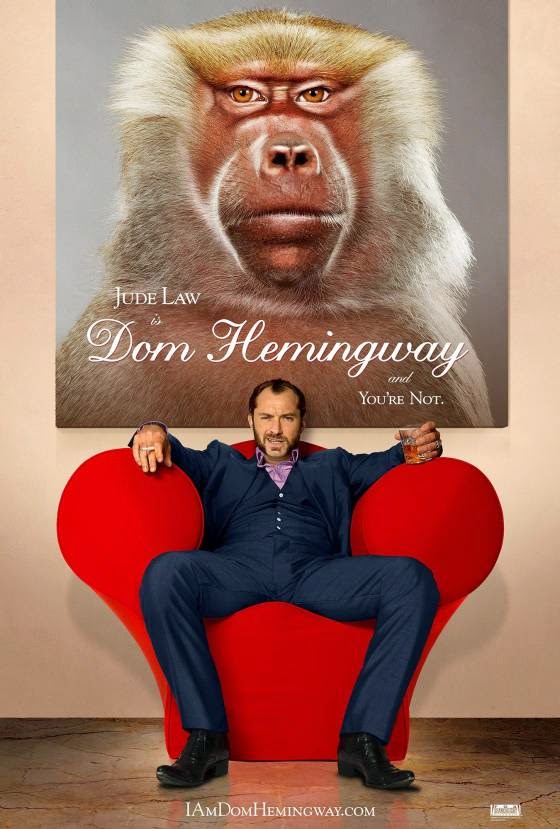 It occurs to me that if you want to be taken super serious as a British actor there are two things that you can do; 1) Play Doctor Who or Sherlock Holmes, or 2) Play some sort of British gangster with psychopathic tendencies who likes to drink, do blow, and say “cunt” a lot.  Don’t be offended by the c-word, it was used strictly for scientific purposes. This brings me to “Dom Hemingway” a film that seems rather customary for British crime cinema, for better and worse.

“Hemingway” stars Jude Law as the titular character who is fresh out of prison after 12 years for keeping the secret of a Russian gangster named Mr. Fontaine. After his release, he reunites with his associate Dickie and the two meet Fontaine at his house in the country to celebrate and for Dom to be rewarded.  Things don’t go as planned for Dom and by the end of the film he not only finds redemption, but a new lease on life, sort of.

As I mentioned before his is Law’s “British Crime Film” following in the steps of actors such as Ben Kingsley, James McAvoy, Tom Hardy, and to a lesser degree, Daniel Craig. What sets Law’s performance apart,m however, is the way that he’s able to balance complete insanity with some genuinely tender moments throughout the film. Audiences might forget that Dom has not only lost 12 years of his life in prison, but also a wife to cancer and he missed his daughter growing up into the Mother of Dragons…..oops….sorry, I get my media mixed up sometimes.

This brings me to Emilia Clarke, who plays Dom’s wayward daughter Evelyn. One, it’s weird to not see her with long silver hair and speaking Dothraki, and two, maybe I’m just not a huge fan of her’s.  Yes, I said it! I do not like the Khaleesi! Do I think she can act? Maybe in the right role.  I think her take on Daenerys Targaryen is fine, despite the fact I don’t like the character, but in “Hemingway” I don’t think she brings much to the table. This could be due to the fact that “Hemingway” is truly a showcase for Jude Law through and through, but even in her limited screen time I feel like she is shoehorned into the film to give Dom added conflicts in his life.

This is where I have a problem with the film. From an acting standpoint, Law is fantastic and makes the film watchable, but the plot-holes and what seems like a film simply filled with vignettes masquerading like a lesser-Wes Anderson film, falls short. Maybe I expected too much from “Hemingway” but without much of a story to work with, and a certain lack of closure come the end of the film, the only thing I could take away is Law’s performance.

Directed by Richard Shepard, who was behind the vastly underrated “The Matador” you see a lot of similarities between the two films.  Mainly the way Shepard was able to take two likable guys, Pierce Brosnan in “Matador” and Law in “Hemingway” and turn them into scumbags with a lot of emotional baggage.  Shepard has the eye for the camera, but it’s, like I said, the narrative that fails the film in the end.

Despite its shortcomings, “Hemingway” is still entirely watchable if you can look beyond some of the issues it has.  Personally, I’d love to see Law in these roles more often.  We’ve become accustomed to him as either Dr. Watson in the “Sherlock Holmes” films, or as a whiny nerd in films like “Closer” but roles like Dom Hemingway are surprisingly in his wheelhouse.