In celebration of the upcoming “Expendables 3”, the guys here at Simplistic Reviews and I are getting familiar with some of the earlier films of past and present Expendables cast members, in a little thing we like to call “Battle of the Tough Guys”. Now gather ’round while I set the coordinates on the “Action Movie Time Machine”! And remember, keep your arms and legs inside the time machine at all times. It’s a time machine, not a damn merry-go-round.

The year is 1991. The United States and it’s allies are engaged militantly with the Iraq army in a little thing called “Desert Storm”. Sgt Slaughter has won the WWF Championship Title from the Ultimate Warrior & Nirvana’s “Smells Like Teen Spirit” reaches millions of disaffected youth through it’s music video that is growing in popularity on Music Television. Imagine that, MTV showing music videos.

Among the chaos that is this new decade, Brandon Lee & Dolph Lundgren team up to show the Yakuza whats-what in, “Showdown in Little Tokyo”.

Chris Kenner, Dolph Lundgren, is a hard boiled detective from the Los Angeles Asian dominated “Little Tokyo”. Kenner’s father was a serviceman during the WWII occupation of Japan. As a child he witnessed the murder of his parents by a Yakuza hitman. There he was raised in an orphanage and taught the native language and customs – including Bushido. Now as an adult, his fluent Japanese and deep understanding of their culture have suited him perfectly for working on assignment with the L.A.P.D.’s “Asian Task Force”.

Johnny Murata, Brandon Lee, has been recently assigned to be Kenner’s new partner. A team-up neither is thrilled about being a part of. Johnny is the opposite side of the coin in this odd couple. He is the wise cracking optimist who isn’t looking for trouble. Johnny, though he is half Japanese, doesn’t care much for traditions of the old world. 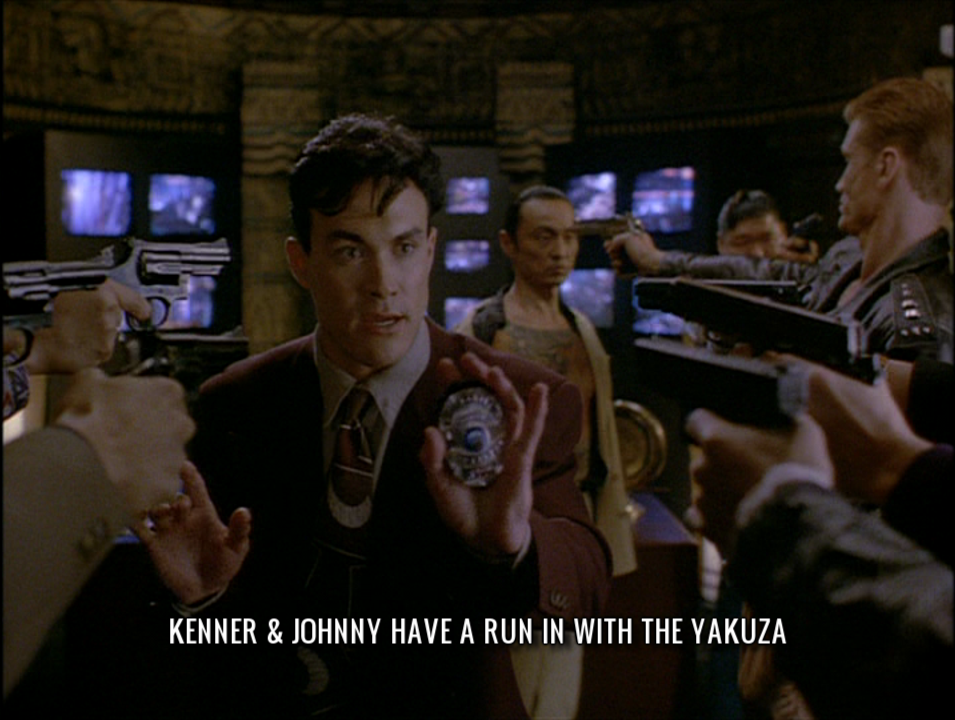 Kenner and Johnny have been assigned to investigate the death of some floozy named Angel. Her death catches the attention of the Asian Task Force when it is discovered that her head was expertly removed from her body with a katana, and was found in an area where the Yakuza have been known to frequent. The ulterior motives of the Yakuza are apparent when toxicology test the floozy’s blood and find that before being decapitated, she took a lethal dose of meth.

Kenner and Johnny question Minako, Tia Carrere, a friend and co-worker of Angel. They learn that the new owner of the nightclub the two girls work at is Yoshida, Cary-Hiroyuki Tagawa, a Yakuza mob boss, who also happens to own the local Red Dragon Brewerie. Minako informs them that she watched Yoshida kill Angel for talking openly about his drug related business plans. Yoshida is going to use the brewerie distribution network to secretly transport meth in beer bottles.

It is also around this time that we learn that Yoshida happens to be the hitman who killed his parents. What a coincidence! 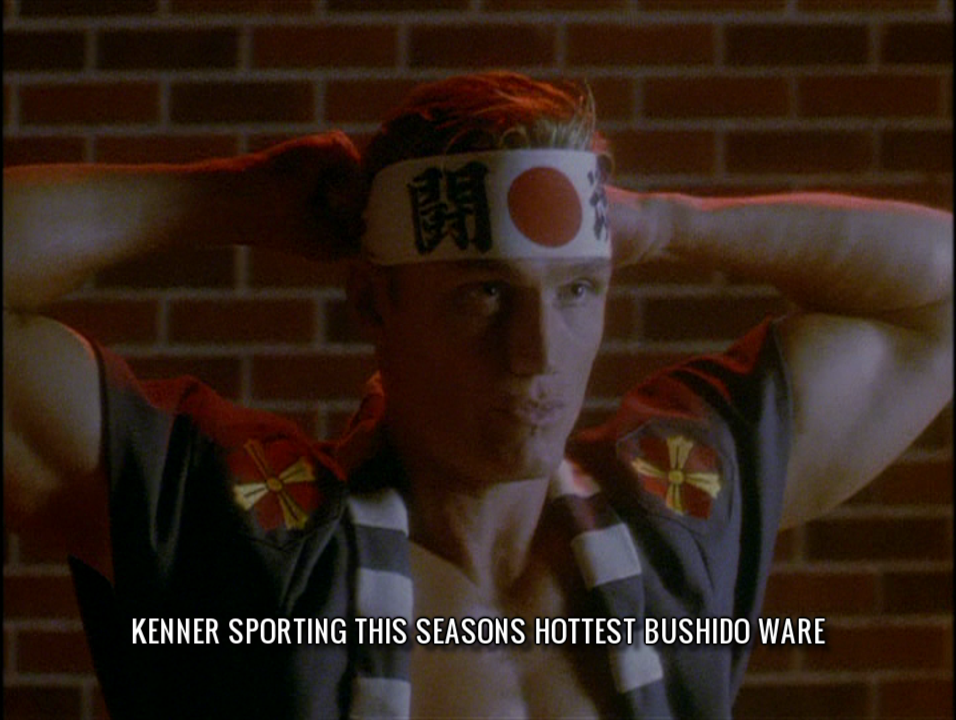 Kenner decided that Minako would be safer if she hid out at his mountain cabin with Johnny and himself. He and Minako share some sexy “getting to know each other” time in a hot tub, followed by some sexy “having sex with each other” time in Kenner’s bed, before a small army of Yakuza attack. Because, somehow they know where Kenner’s secret mountain cabin just so happens to be located.

Kenner and Johnny do what they can to defend the cabin but are out numbered and Minako is kidnapped. That is, not before a healthy dose of strange occurs. As our heroes prepare themselves for a fight, Johnny mentions that he saw Kenner strip naked as he hopped into the hot tub. He then tells Kenner; “You have the biggest dick I’ve ever seen on a man”. This line has no place and it made me wonder that purpose it served. But more on that later. 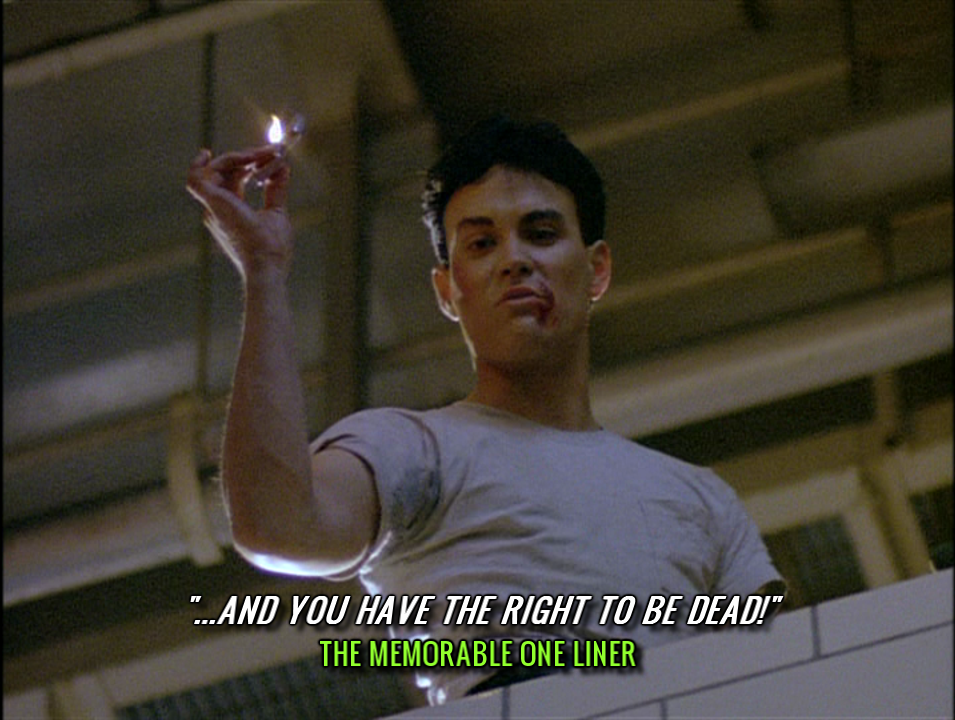 So, Kenner and Johnny head after Yoshida. They infiltrate the Red Dragon Brewerie by hi-jacking a beer truck and driving it through a brewerie wall. All hell breaks loose and before long the Yakuza are dead and the brewerie is on fire. Johnny rescues Minako and Kenner chases after an escaped Yoshida on foot.

Now I don’t want to be a stick in the mud, but when your a police officer, isn’t it important to collect evidence and arrest suspects? Ya can’t just go around setting drug operations on fire and blowing people up.

The foot chase leads to a festive night time parade in “Little Tokyo”. Kenner and Yoshida draw swords from a couple of Japanese war re-creationists and begin to battle. Yoshida gains an early upper hand, but soon Kenner turns the tables and avenges his parents death by plunging his katana into the heart of Yoshida. But that’s not all! He then throws Yoshida onto some sort of giant decorative pinwheel, which the sword lodges into. Fireworks on the pinwheel begin to light and it, as well as Yoshida attached to it, begin to spin as it bursts into a firework explosion. Those crazy Japanese sure know how to throw a party. 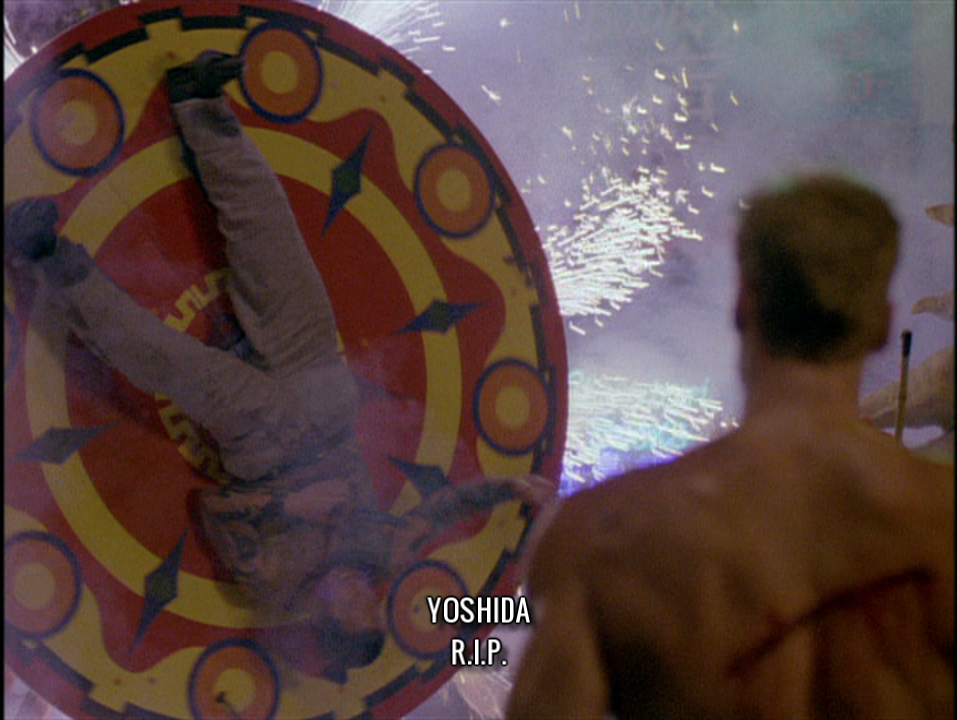 The films ends with Kenner, Johnny and Minako walking along the parade route, discussing how they are going to explain to the Chief of Police what happened as the credits begin to roll.

“Showdown in Little Tokyo” isn’t a great film. It’s not ever a great action movie, but it does have it’s moments. For better or worse.

What is interesting about Kenner and Johnny’s “odd couple” relationship and how it plays against stereotypes.

In the scene were Kenner and Johnny meet, Kenner is kicking the asses of some Yakuza goons who are trying to extort a neighborhood diner. Johnny shows up, expecting to meet a fellow police officer, and sees this 6ft. tall Swede in a leather jacket, smashing up a Japanese diner and assumes that he is the one who is up to no good. When Johnny walks through the door, Kenner immediately assumes that Johnny, an Asian man in a suit, is another Yakuza member and the two begin to fight.

We later learn that Kenner has been formally trained in Bushido and has an extensive knowledge of Japanese culture from having been raised in Japan. Johnny, who is half Japanese and was born in America, has little ties to his ancestors other than also having been taught Bushido. Johnny even says; “Look champ, I was raised in the Valley. My dad is a white who is a dentist. I know about malls, MTV and driving my dad’s car down Mulholland.”. They are each atypical characters, making their partnership even more atypical.

The way the “odd couple” dynamic is played with and used to counter predictable stereotypes is really what this film is about, aside from the good guys bringing the Yakuza to justice.

A similar juxtaposition is presented with the tradition of the Japanese “old country” and Bushido training placed in the neon lights and sandy beaches of Los Angeles.

These two elements, had they been built stronger into the story, could have really given “Showdown in Little Tokyo” character and made for a very memorable film. Unfortunately, these ideas are pushed aside and the movie is memorable for other reasons; “You have the biggest dick I’ve ever seen on a man.”

The acting is pretty good. The fight scenes are less than mind blowing and are often hindered by Dolph’s size. He is too big to be fast enough to sell some of the martial arts moves. The story itself is standard fare for this type of film. The soundtrack, at times, sounds like it was lifted from an old “Teenage Mutant Ninja Turtles” cartoon and I’m sure you would have guessed, the relationship between Kenner and Johnny is the real star of the show. 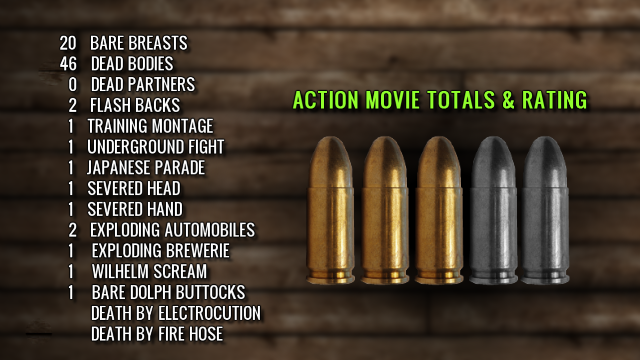 I’m Cory Carr, and this concludes our ride on the “Action Movie Time Machine”. Until next time, Semper Fi!

Guardians Of The Galaxy (DJ’s Take)