Guardians of the Galaxy – Anti

Usually once a year, there is that one movie that you know is a foregone conclusion. I won’t dance around it, it’s “Guardians of the Galaxy” this year. But before I get into the meat of this review, a brief story; the night before I was all set to watch “Guardians” the next morning, a sense of dread washed over me. I thought, “what if this movie isn’t as good as I thought it would be?” “What if I walk out feeling slighted?” “What if everyone else is walking out happy and I’m walking out disappointed?” I would have to really take a look into my soul and see what was wrong with ME? Alas, that wasn’t the case, “Guardians” was wonderful, it was great, it was down-right groovy. For me, “Guardians” is the anti-Marvel movie. It plays by it’s own rules, and for the first time in Marvel’s Phase Two films I wanted more, got more, and wasn’t letdown, and before you attack, I also loved “Captain America 2” but “Guardians” has taken that big step forward that Marvel was lacking; it’s expanding the universe to places you wouldn’t believe.

“Guardians” tells the tale of Peter Quill, aka, Star-Lord, a space pirate working with Yondu, leader of the Ravangers. While exploring the desolate planet of Morag, Quill stumbles upon a mysterious orb and is attacked by Korath the Pursuer, but escapes. Needless to stay an adventure plays out that features Quill teaming up with a living tree named Groot, a sexy, green, ass-kicking assassin with a past, Gamora, a gun-toting, wise-cracking raccoon called Rocket, and Drax, a tattooed convict with nothing left to lose. Together the “Guardians of the Galaxy” have to save the planet of Xander from Kree extremist, Ronan the Accuser. It’s typical comic book storytelling with a rebellious and anti-Marvel bite that we haven’t seen since “Iron Man.” 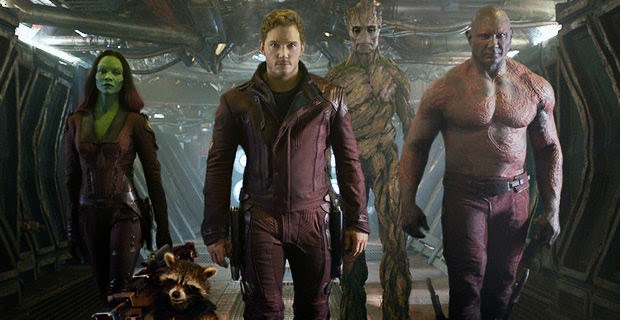 Since day one, it just seemed that “Guardians” would succeed, but only with those that were willing to give it a chance, and after it’s first weekend $160 Million international haul, plenty were willing to give something new a chance. The cast is one of the best, but one of the oddest that you might ever see. Led by Chris Pratt, who so many know as the former Pawnee City Hall shoe shiner Andy Dwyer in “Parks and Recreation”, makes it known he’s ready for Hollywood in a “star” making performance, and the cast only gets better. From Zoe Saldana, Michael Rooker, and even Glenn Close, the cast is the perfect mix for a film this eccentric.
While the parts played by humans are great, it’s the CG characters that really steal things and create an unexplainable emotional connection with the audience. Who would think that a raccoon and a humanoid tree creature would create some of the most emotional scenes in film this year. It’s a testament to direction, which I’ll get into shortly, script, and performance. You believe that Rocket, voiced by Bradley Cooper, is real, and his implied tragic back-story brings the feels in a major way, and this leads me to his relationship with Groot, his bodyguard/whipping tree, if you will. At heart, their relationship is simple; Rocket is a raccoon, who lives in a tree. The beauty is in the simplicity. The most human emotions out of the entire film are from the film’s two non-human characters. 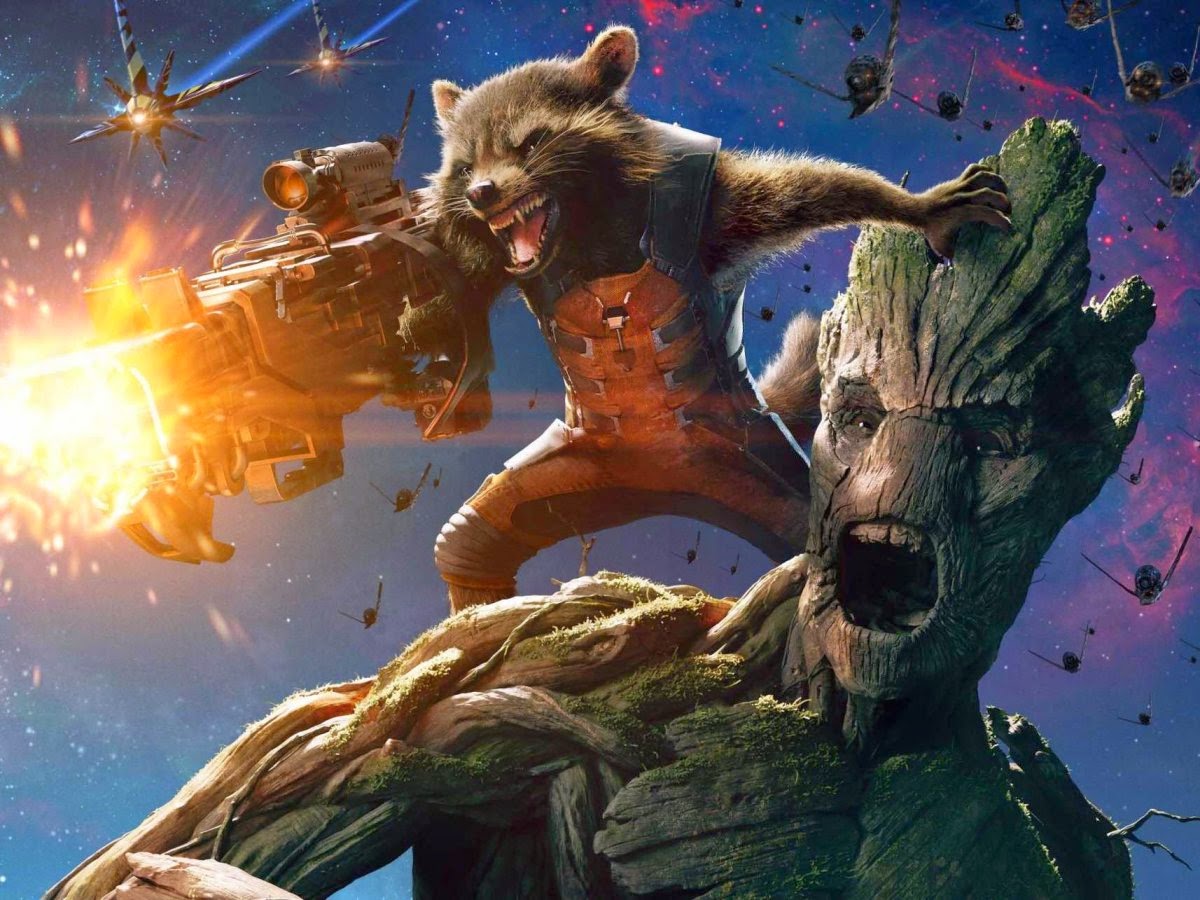 However, nothing would work in “Guardians” if it wasn’t for one person; director James Gunn. From humble beginnings working with Lloyd Kaufman at Troma Studios to his first directing gig on the ultra-underrated throwback creature feature “Slither,” and now as Marvel’s golden child directing what could be the high-grossing film of the year. It’s been quite a road. What Gunn brings to Marvel is a rebel mentality. He’s never been a guy to conform, but at the same time he knows how to strike the perfect of pleasing the fans, while still creating something that fits his twisted sensibilities. Plus, he cares about the material. While on the media trail, all Gunn would talk about is how everyone is going to love what he called “the raccoon.” Normally, directors will build up their biggest stars and the big action set pieces, but all Gunn went on about is how Rocket is going to steal the show…..a raccoon….was going to steal a nearly $200 million dollar space epic produced by Marvel and Disney in the middle of the Summer movie season? Well, Gunn was right, he….was….right.

So many things could have gone wrong with this film too. One, not many people know about the “Guardians” outside of hardcore comic fans. For the normal reader I’m sure the idea of talking trees and other misfits might be a little “alien.” Two, this was a huge gamble for Marvel/Disney. Taking a chance on Gunn as a director and trusting in Pratt as the lead wasn’t something on anyone’s radar, except for Kevin Feige. Three, creating another comic book team up, but only doing it in two hours as opposed to three movies (I would count “The Incredible Hulk” but for some reason people don’t see that as canon now). Comparing “Guardians” to “The Avengers” is natural; their both team-based films fighting a big bad, oh, and they argue a lot. What sets “Guardians” apart however is the heart it has. I’m not saying that Joss Whedon doesn’t have heart, hell, he’s one of the biggest fanboys working in film today and Marvel wouldn’t be where they are without him, but Gunn not only created something out of what could have been considered nothing, and surpassed “Avengers” in my opinion. And yes, “Guardians” has become a huge comic commodity recently but only if you are a true die-hard comic reader could you say with a straight face that you’ve been a “Guardian” fan from the jump. That, or you’re almost 50 years old at the time of this reading.

This might sound sacrilegious, but “Guardians” is better than the “Avengers.” Yes, it is. On first viewing I still had “Avengers” in the lead by a little bit, but sitting down the second time, this time with the wife, I felt so much more emotion watching it again. First, I could relax a little more and simply enjoy the film this time and not worry about the overall story. I had the chance to focus on the little things that made the film special. Gunn has a habit of including little tid-bits for fans of his older films, including the always entertaining cameo by his mentor Kaufman. The other thing was watching this with my wife. At heart, we’re both nerds; however, we butt heads when it comes to things like Harry Potter vs. Lord of the Rings, but this is one of the films that we were both looking forward to this year. Not only is “Guardians” great fun, but it also brings my wife and I closer together. We cried in the same parts, we cheered when our heroes finally came out victorious, and most importantly when we walked out of the film we both looked at each other said, “let’s see that again!” That’s a win in my book, and something I’m sure a lot of people are doing around the world.

Finally, and this is for the cynics. I understand your stance on comic films. They are campy, fairly vapid, and maybe worst of all, don’t add much to the film landscape in terms of increasing awareness of women’s rights, the plight of those overseas, or contain some sort of message that is supposed to make us better people. Well, maybe it does, at least with the last point. When a person walks out of a film and wants to see it again, or that little kid falls in love with a gun-toting raccoon, maybe that’s their way of changing the world. It’s making it a better place to live when we can all be together in a darkened theater and enjoy what is happening on the screen and feel like we are one community sharing a goal; to have fun. Look, I enjoy art-house film as much as the next person, but in a world that is this shitty, and hard to live in, why not have some fun with a wise-cracking rogue, a walking thesaurus covered in tattoos, a genetically engineered killer looking for redemption, a tree that gives flowers to little girls, and of course the raccoon. “Guardians of the Galaxy” is everything it was meant to be; a fun, balls-to-the-wall space adventure that gives cynics the finger and allows someone who I consider the “anti-Michael Bay” to show the world what he can do on the grandest of all stages, and its worthy of your love, admiration, and at times, tears.