I consider myself pretty leveled headed and reasonably arbitrary when it comes to film, TV, and pretty much anything else. I give most anything a chance and I try to watch anything for the purpose of having my say in an argument. The worst thing you can run into is a conversation with someone who one, doesn’t have frame of reference of a topic, and two, simply tries to flame you into an argument and put you on the defensive. It’s common for these two things to happen in this day and age of Twitter, Reddit, Facebook, etc. I just wanted to preface all of this before I get into this review of THIS GENERATION’S “Teenage Mutant Ninja Turtles,” produced (not directed people) by the grand auteur Michael Bay. It’s a befuddling experience in nostalgia, childhood, and finding my place in the world.
“Turtles” is the origin story of everyone’s favorite heroes in a half shell, Leonardo, Donatello, Raphael, and Michelangelo. In this adventure they are tasked with stopping The Shredder and politico Eric Sacks from destroying New York City. With the help of April O’Neil and cameraman/news van driver Vernon Fenwick, the turtles have to save the day while finding out about their past. This is the basic plot, if I was to tell you anymore, I’d only confuse you and probably myself.
Where does one start with this film. My first thought when watching this was “did I just miss the first part of the movie?” I literally thought I was dropped into the middle of a film. There was no character development and characters are shown as you should already known who they are. As a life-long Turtle fan it’s a good thing I didn’t need to know who everyone was or I would have been lost. However, even with knowing who most of these characters are, this new adventure is befuddling and the way most of the characters are portrayed is simply, sad.
One of the main arguments that most fans made was the new look of the Turtles. After watching the film, that was something that really didn’t bother me, and honestly, it never bothered me in the first place. Despite the departure from the comic book, cartoon, and original film, you have to know what mutation does to something(s). When something is mutated things change from the molecular level and not everything will look the same. Bottom line, I like the look of the new Turtles. I also liked the look of Splinter, and from it’s base form, I liked the look of the new Shredder suit. I understand the need to upgrade things from an aesthetic standpoint, but this brings me to how characters are portrayed. 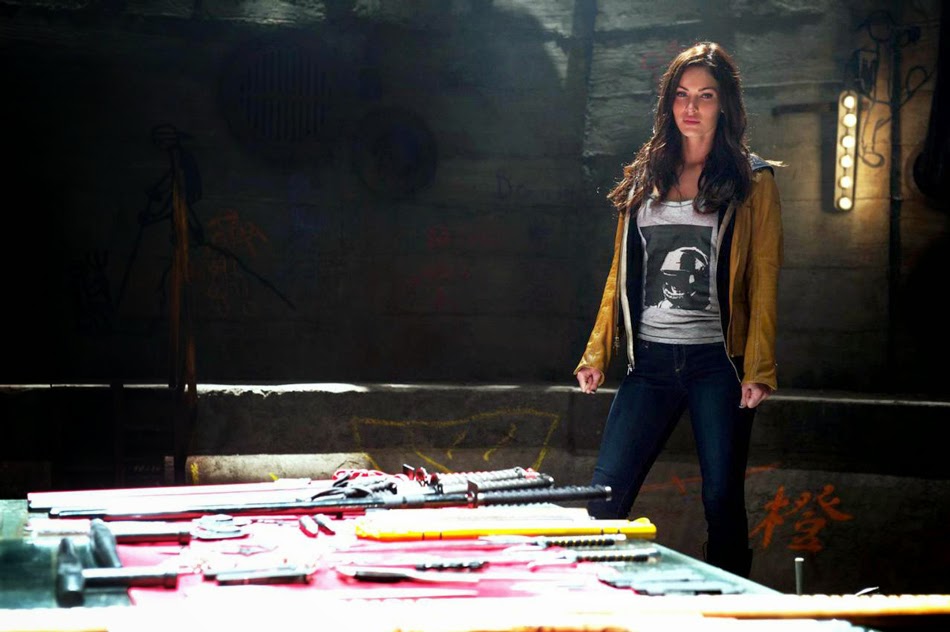 The main gripe about these Turtles is their likeability. I honestly didn’t like them. Sure, if you’re a kid you might like the fart jokes, and their rocket skateboards or nerd glasses, since “geek chic” isn’t something going away anytime soon. Just an aside, and to educate those less informed, the “geek” derives from people in the old circus sideshows that would bite the heads off of chickens. Just putting that out there. But aside from Raphael, who I think they kept as close to the comic, TV, and film versions, I just didn’t like the personalities, especially Michelangelo. His dialogue was irritating and it made him seem like a douche-bag teenager with ADD, and this brings me to his “relationship” with April O’Neil, played by Megan Fox. Where does one begin here. Unlike Judith Hoag, or even Paige Turco, Fox provides nothing of substance or memorability to one of the key figures in Turtle history. Her blank stare and vapid dialogue are hard to really get past, and I can only wonder what could have been with another actress in that role. First, give me a REAL redhead; Anna Kendrick would have been great in this role, almost perfect if you ask me, but of course I’m partial to Ms. Kendrick. Back to the dialogue. There was an air of weird stalker/rapeiness that seemed to permeate off of Mikey. Yes, he’s a teenager and his turtle hormones are running wild, but wow was it uncomfortable. 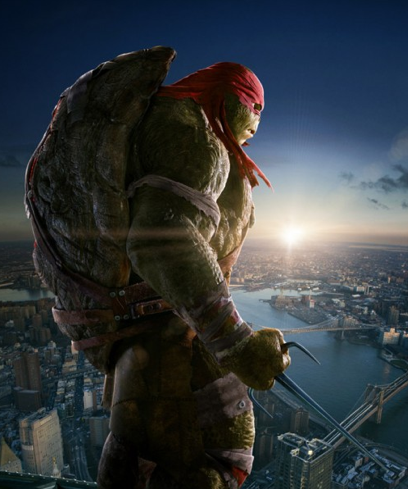 Now, I don’t want to make this a bash-fest, because there were scenes that I really liked about this film. Contrary to popular belief, I thought the re-imagining of the Turtles’ origin was actually pretty interesting. It kept the overall spirit, but it added an extra wrinkle that will likely come into play if they decide to keep this franchise going, which I’m sure they will. Two, like I said before, I liked Raphael. I thought they made him a bad-ass and he really was he backbone of the film. Donatello wasn’t bad either, and him being my favorite Turtle, I thought it was an interesting take, but I think they played up the nerd angle a little too hard, and this is coming from a nerd. Finally, I loved the snow chase that closes the second act of the film. It looked great and showed something the film lacked a lot of; the Turtles acting like a team. It was an engrossing sequence and it made me forget about much of the things that bothered me up to that point. But, low and beyond, to take me out of the zone, we get a shot of Megan Fox’s ass. I get it, and I understand why it’s in this film, but come on…..

Overall, I’m not the biggest fan of this version of my beloved Ninja Turtles, but I can see why some people will love it and will call it THEIR TMNT, just like I still consider Tim Burton’s “Batman” as MY “Batman,” and this generation will consider Christopher Nolan’s “Batman” THEIR Batman. If anything, after seeing this version of TMNT it re-affirms my love for the 1980s cartoon and the film from 1990. See this new version of the “Turtles” at your own risk.

Fun Fact: Kevin Eastman and Peter Laird created the “Turtles” to poke fun at some of the biggest comic books of the 1980’s including Frank Miller’s run of “Daredevil.”