All aboard the “Action Movie Time Machine” for one final “Battle of the Tough Guys” review before we all go see “Expendables 3”. This time we get a twofer. Antonia Banderas matches wits with the Italian Stallion. Banderas, the two time mariachi band leader, now joins the Expendables roster, and a fitting addition he is.
The year is 1995, and a terrible year it was. Timothy McVeigh detonated a car bomb outside the Alfred P. Murrah Federal Building in Oklahoma City. Nintendo released the “Virtual Boy” which later proved to be a commercial failure. Dirty hippies everywhere mourned the passing of Jerry Garcia and the Internet becomes privatized and found it’s way into “Assassins“.
THE SKINNY
Our tale begins with Robert Rath, Sylvester Stallone, the worlds most skilled assassin who has recently accepted a contract to kill billionaire Allan Branch. This takes Rath, and us, to the cemetery where Branch is paying his respects to his brother who recently passed away as a result of a car accident.
Branch, whose character is short lived, is interesting because while he is at his brother’s funeral, the swarming media can be overheard reporting on Branch and how he is under investigation for funding para-military right-wing hit squads in South America. The film is littered with these, sort of, left-wing jabs at the right. In another scene an anti-NRA advertisement can be seen on the side of a bus. These things aren’t important but funny to see in a film starring Stallone, who is a diehard Republican. Hmm, “Diehard Republican”, that could be the title of his next movie. Moving on. 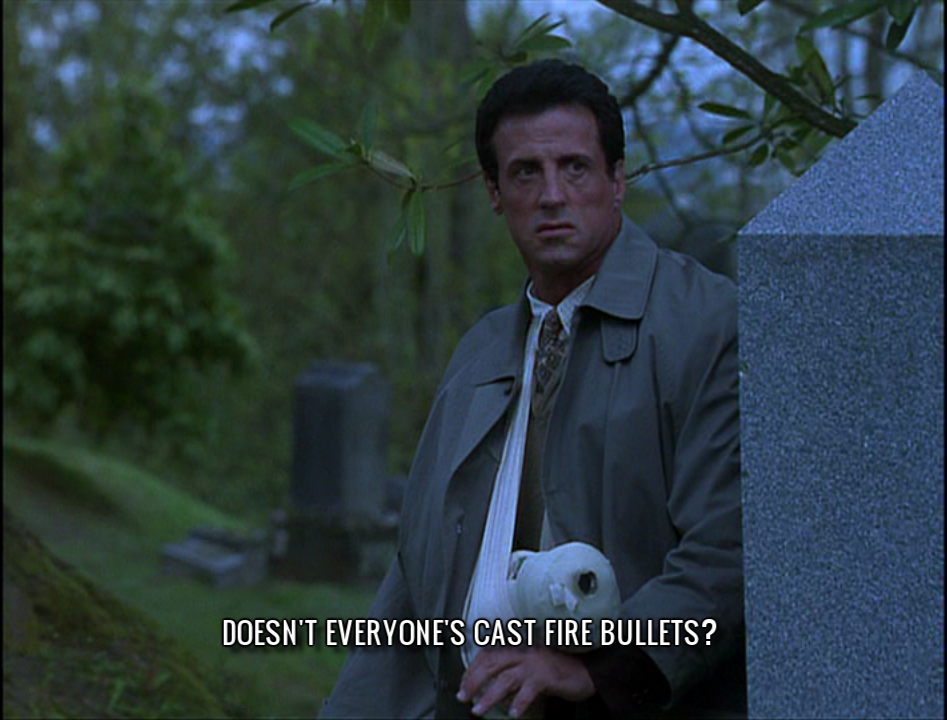 Just as Rath is preparing to take the shot, using the old “you can’t see my gun because I‘m wearing a fake cast” trick, a shot rings out and Branch falls dead. Someone has beaten Rath to the punch. In assassin lingo he “retired” Rath’s “mark”.
After a brief fire fight with police, Miguel Bain, Antonio Banderas, is captured and taken into custody. Rath, curious about who this other assassin is and who tipped him off about his contract, follows after Bain and discovers that he, from the backseat of the cop car and handcuffed, managed to cause said cop car to barrel roll and he escaped police custody.
Rath continues to hunt down clues as to who this mystery assassin is, but takes another contract in the meantime. This takes him to some five star hotel where he will be intercepting a deal between an unknown lady hacker and a group of Dutch men. Apparently she has stolen some top secret encrypted data, stored on a 3.5 inch floppy disc no less, and is attempting to sell it. Rath is sent to retrieve the disc, eliminate the Dutch buyers and retire the mark, who we later learn is Electra, Julianne Moore. This is all fine and well, but once again Bain shows up and makes Rath’s plans all the more difficult to carry out. You could say that Bain is the BANE of Rath… These names are stupid.
Rath, now believing that he himself is a mark, escapes with Electra and the disc in an attempt to find out what exactly is going on; who is after him? and what information is on the disc?. A lot of plot happens here. I mean A LOT. So let me try to shorten this as best I can so I don’t turn this review into a book. 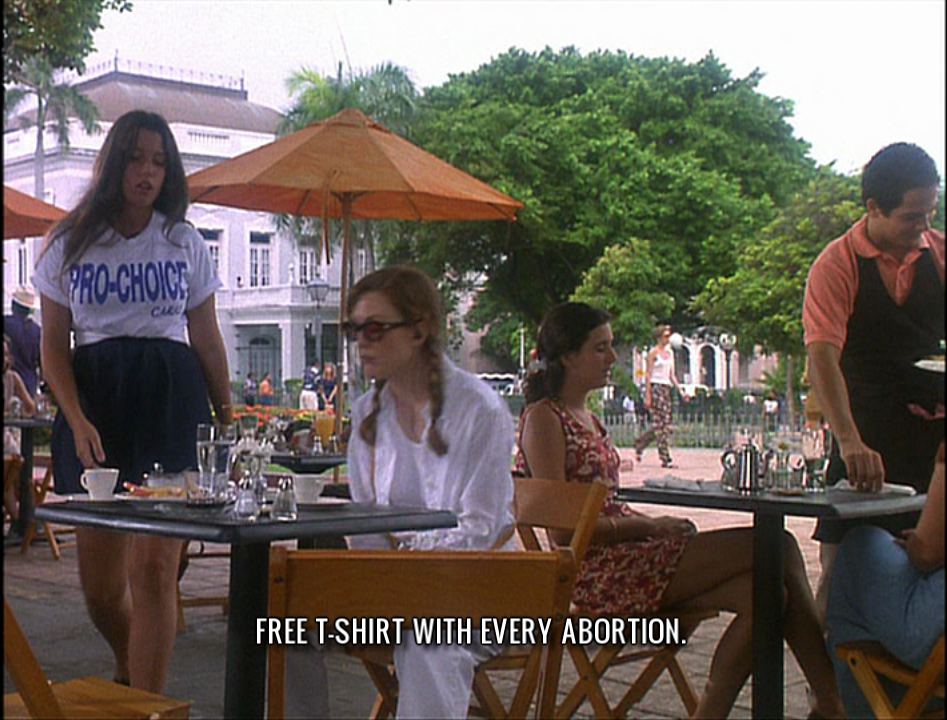 Rath and Bain have several uneventful run-ins before he and Electra escape the city. Oh, don’t forget Pearl, Electra’s cat. To make her even more interesting she’s a cat lady. When they do escape, they use the Internet to set up an exchange for the disc and two million dollars from whom they suspected is the CIA. The money is for Rath so he can get outta the killin’ game and finally retire. This however was a double cross and his briefcase full of money explodes. But that’s okay because the disc was a fake anyhow.
At this time we also learn that Rath was once contracted to assassinate Nicolai Tashlinkov, a fellow assassin and friend, fifteen years prior. This was something Rath has always wrestled with. I wonder how this might effect the outcome of this story.
Rath and Electra then use their 1990s laptop and their 1990s dial up Internet connection from the back of Electra’s Mustang — somehow — to arrange yet another exchange. This time for the real disc and now twenty million dollars. The money is wired to a bank account of Rath’s in the Caribbean. All he and Electra have to do is withdraw the cash in person and leave the disc in a safety deposit box for the contractor to collect.

Again this is all fine and well, but the nameless contractor seems to be playing Rath and Bain against each other. Because, again, Bain shows up to foil Rath’s plan. This time Bain stakes out the bank, with Rath inside, waiting for him to show his face. Bain wants to kill 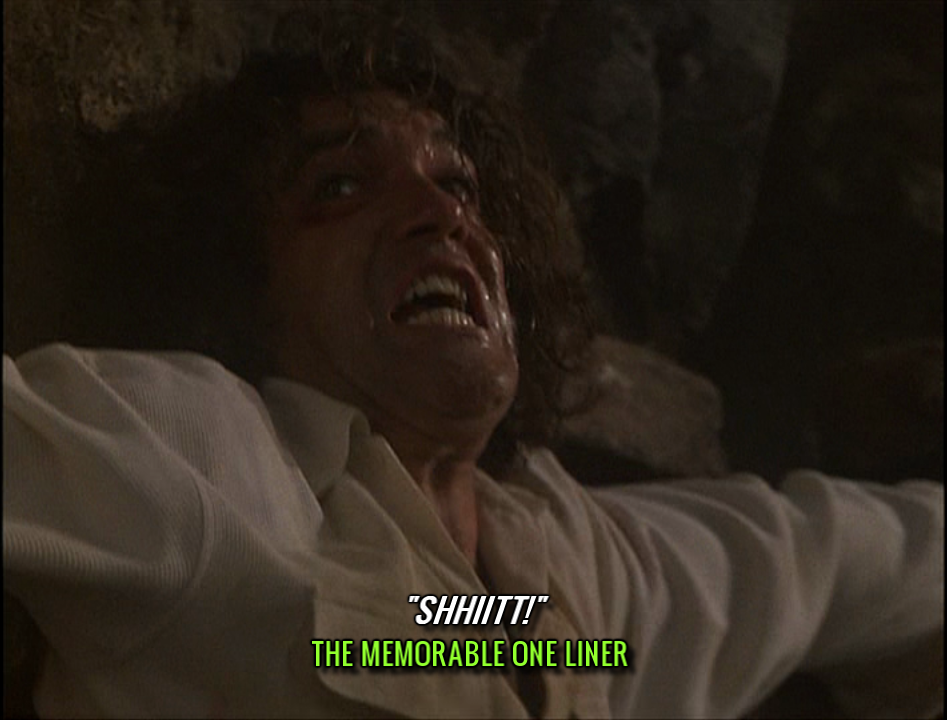 While Bain, the guy who wants to be the greatest killer in the world, waits patiently from his sniper roost, nature starts a-callin’. With his rifle in one hand, he tries to piss in an empty water bottle with the other. Bain thinks he sees Rath leaving the bank, fumbled for his gun and ends up spilling his piss allover himself. Classy!
The Caribbean, as well as this particular bank, is very important to Rath. Fifteen years ago, Rath assassinated Tashlinkov as he was leaving this bank after also retiring from the game. Now Bain plans to do the same. This is some heavy shit people!
Long story short, Rath withdraws the cash before squaring off with Bain one last time. With Bain on his death bed, the true mastermind of this entire scenario makes himself known. Who is it? Tashlinkov! He faked his death and has been playing Rath and Bain against each other in a plot to get Electra within his grasp. Why you ask? Well the short answer is Communism. The long answer is that the information on the disc exposes Tashlinkov’s false death as well as his nefarious activities since then. 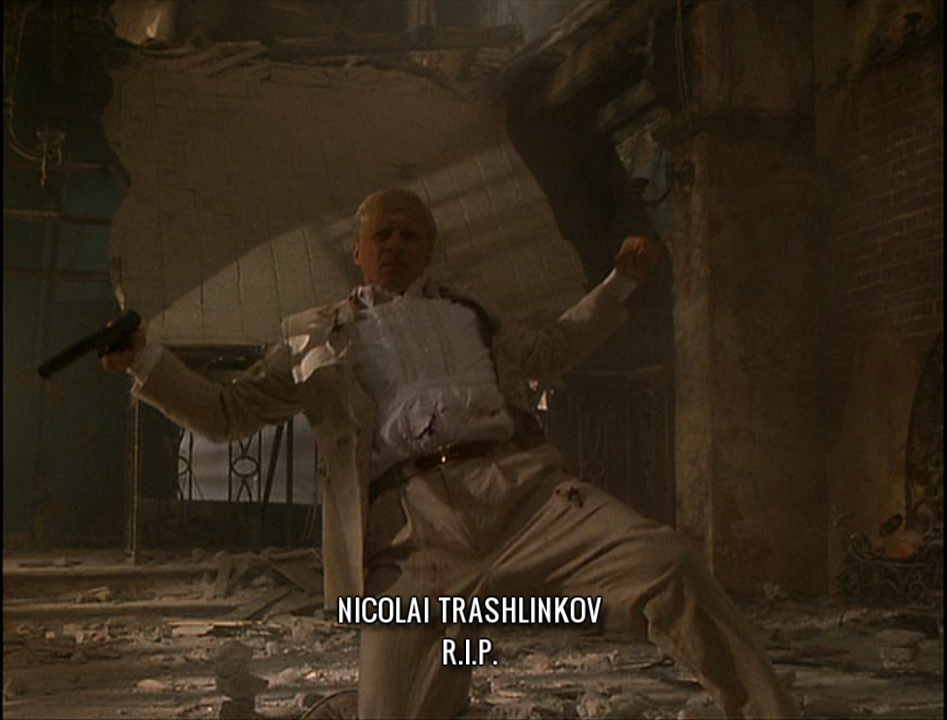 Both Rath and Bain realize that they have been played, and simultaneously turn and unload on Tashlinkov. Rath and Bain have some final words before Rath unleashes his WRATHon Bain and he and Electra walk off into the sunset, discussing her cat. The End!
THE VERDICT
Oh my god, this movie! “Assassins” should have been called “The Movie That Wouldn’t Die!” or “Welcome to Purgatory”. It had potential, sticking close to the standard conventions of action movies. But unfortunately it was carried out in such a way that took the wind out of it’s sails before it ever had a chance.
The action scenes fizzle out before they get good. The story is convoluted with much screen time being taken up with events that soon don’t matter. And the subtext is presented, but not around when it is needed.
It’s as if the script was written by blind librarians or something. Nothing personal against the visually impaired or literate. “Assassins” just feels like it’s an action movie made by people who have never seen an action movie. Like they were painting by numbers…with a paint brush stuck in their eyes. I personally blame director Richard Donner, but that is neither here nor there.
There is something that “Assassins” has in common with many films of this vintage. It doesn’t know how computers or the Internet work. This is surprising since it was written by the Wachowski…persons formerly known as brothers. Who, after “Assassins”, went on to make a little known film that goes by the name “The Matrix”. “The Matrix”, which is teeming with tech savvy, though much is fictionalized to better weave the web of fiction, is smart. “Assassins” is not. The Wachowskis have come along way, let me tell you.

The ’90s were funny when it came to computers. I compare it to the early ’60s atomic age of sci-fi,

where nuclear radiation was the cause of every kind of superhero and monstrous mutation conceivable. This was because people didn’t understand what radiation was or how it effects biology. In the ’90s, this type of sci-fi plot was seen as charmingly ridiculous or even laughable. In the ’10s, a time where large portions of our annual GDP is generated from the Internet & we have conversations with folks using our futuristic video phones, watching a film like “Assassins”, where people connect their laptop to some ever present dial-up wi-fi Internet connection from the back seat of their car, is also fucking laughable! Dial-up and wi-fi are somehow the same thing? Well in this movie they are. Computers are magic.
Many of the goofy usages of the Internet or predictable plot turns don’t make this a bad movie. “Assassins” is a bad movie because it isn’t fun to watch. It isn’t interesting or smart. It isn’t very entertaining either. It drones on for a full two hours and thirteen minutes with scene after scene that don’t bother to progress the story forward, nor do they do what action movie should always do. Have action! In the third act of the film we (two friends and myself) counted four instances in which Stallone and Banderas were in the same space-time and weren’t at each others throats. Excuse me, but isn’t this film called “Assassins”? Kill each other already! 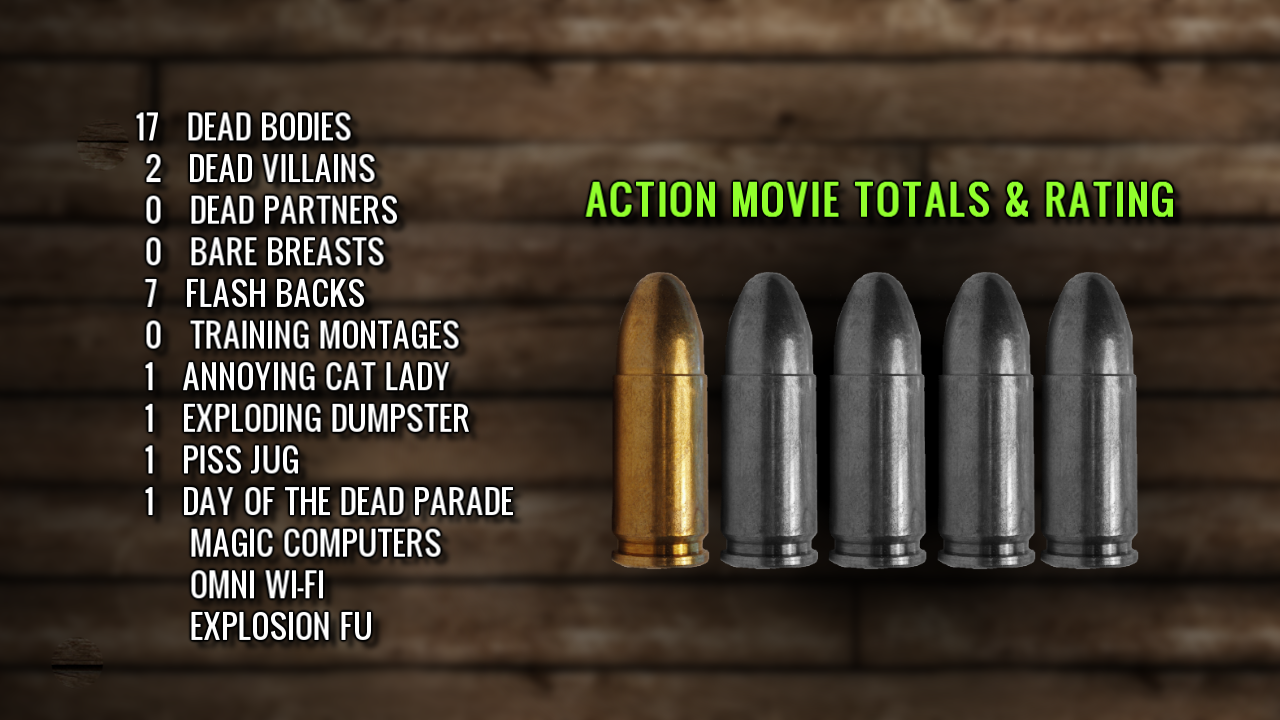