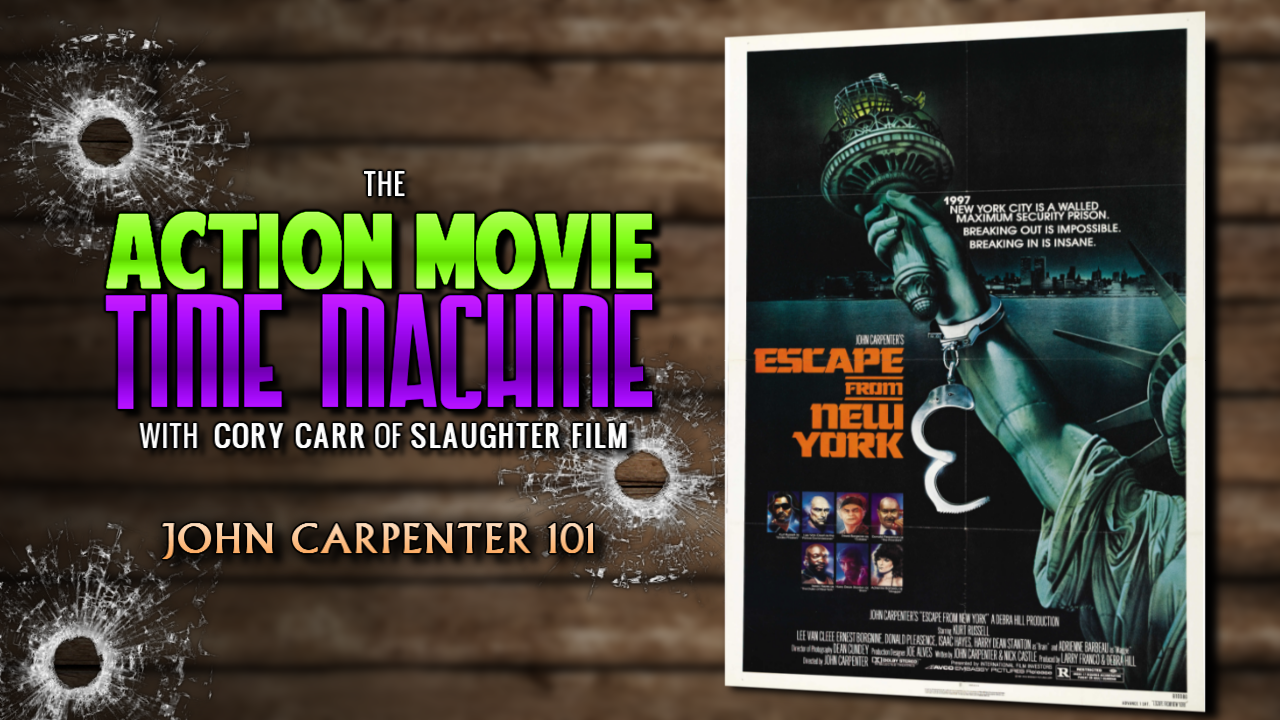 Welcome back to another trek on the “Action Movie Time Machine”. Last time we met, we visited some of John Carpenter’s earlier work, “Assault on Precinct 13“. This time we are going to witness Kurt Russell in one of his most bad ass roles, as Snake Plisskin. Talk about “Expendables” eligibility. It would be a shame if Sylvester Stallone over looks Russell for “Expendables 4: Return of the R Rating”.

The year is 1981. IBM had just released the first personal computer capable of running Microsoft’s Disc Operating System (DOS). MTV hits the airwaves, debuting with “Video Killed the Radio Star”. U.S. President Ronald Reagan signs the top secret directive authorizing the CIA to recruit and support Contra rebels in Nicaragua. While all this was happening, Snake Plisskin is sent to Manhattan to rescue the President in “Escape From New York”.

THE SKINNY
The year in 1997, and United States is a war torn police state. With all the crime and violence of this futuristic America, extreme measures had to be taken. New York’s Manhattan Island has been transformed into THE high security prison of the nation. Just think of Alcatraz, but on steroids. There are no cells and no guards. The prisoners are free to roam the city streets and do whatever is necessary to survive. And once you go in, there is no coming back out. The bridges are mined and the waters are patrolled and protected by the National Police Force, a para-military like group responsible for keeping convicts from escaping, by any means necessary.

This is all fine and well until a member of the “National Liberation Front”, a terrorist organization, takes over Air Force One and crash lands the plane on the prison island. The idea being that the president, if he survives, will now have to get by as the convicts do within the confines of the prison that he unlawfully created. 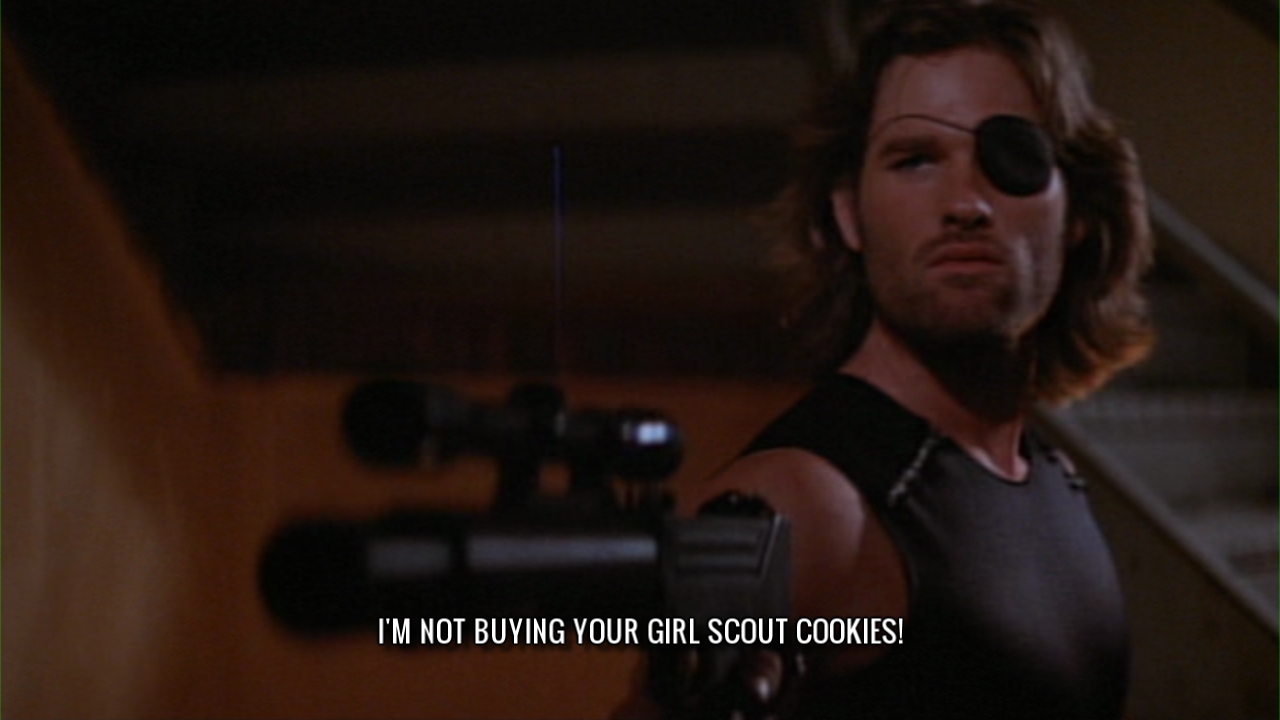 It is at this time that Hauk, Chief of National Police played by Lee Van Cleef, brings in the recently arrested Snake Plisskin, Kurt Russell. Snake is a former military hero who has become tired of his leaders sending him on suicide missions that he always manages to narrowly escapes. He goes AWOL and becomes a criminal. Robbing the national reserve is what gets him caught.

Fearing that the President may be harmed if there is a military rescue mission, Hauk decides to send in a loan wolf. It becomes Snakes’ mission to sneak onto the island, locate and rescue the President, Donald Pleasence, as well as the documents and cassette tape that the President has with him. Then return all of the above to Hauk. If he does, Hauk will erase Snake’s criminal record forever. If he doesn’t, he will die.

In prep for the mission, a doctor injects two micro-explosive charges into Snake’s arteries. If he isn’t back with the president in under twenty three hours, the charges will blow, rupturing Snake’s arteries and he will internally bleed to death.

Snake uses a glider to enter the island, which he lands on the roof of one of the World Trade Towers. He begins to search the city for the President and it isn’t long before he begins to realize just how fucked this place is. The city is littered with murderers and rapists, there are crazy cannibal hobos who live in the sewer who come up at night to feed, and the locals are less than pleasant to out of town motorists such as our boy Snake. 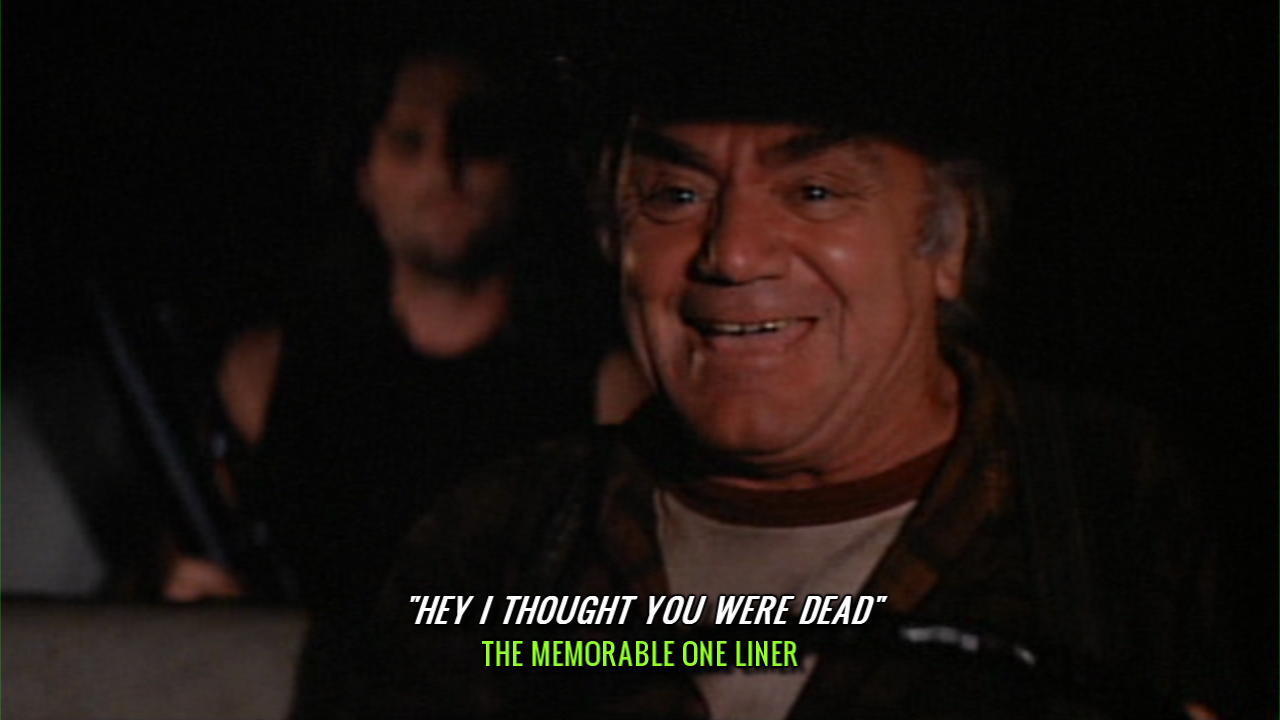 Things get tense when the cannibalistic sewer dwellers try to have Snake for dinner, but fortunately for him Cabbie, Ernest Borgnine, shows up in his taxi armed to the teeth with molotovs. Snake questions Cabbie and learns that the President is alive and has been captures by The Duke of New York, Isaac Hayes. The Duke is the supreme ruler of the prison island and is planning to use the President as leverage as he makes his way across the bridge and into the free United States.

Through the help of Cabbie, “The Brain”, the Duke’s nerdy adviser, and Maggie, The Brain’s concubine, Snake manages to get inside The Duke’s compound and is thrown into a one-on-one in a gladiatorial battle to the death against pro-wrestler Ox Baker. This offers up a good distraction, as everyone would is eager to watch the legendary Snake Plisskin take on The Duke’s undefeated monster bruiser. This distraction affords The Brain and Maggie a chance to help the President escape. 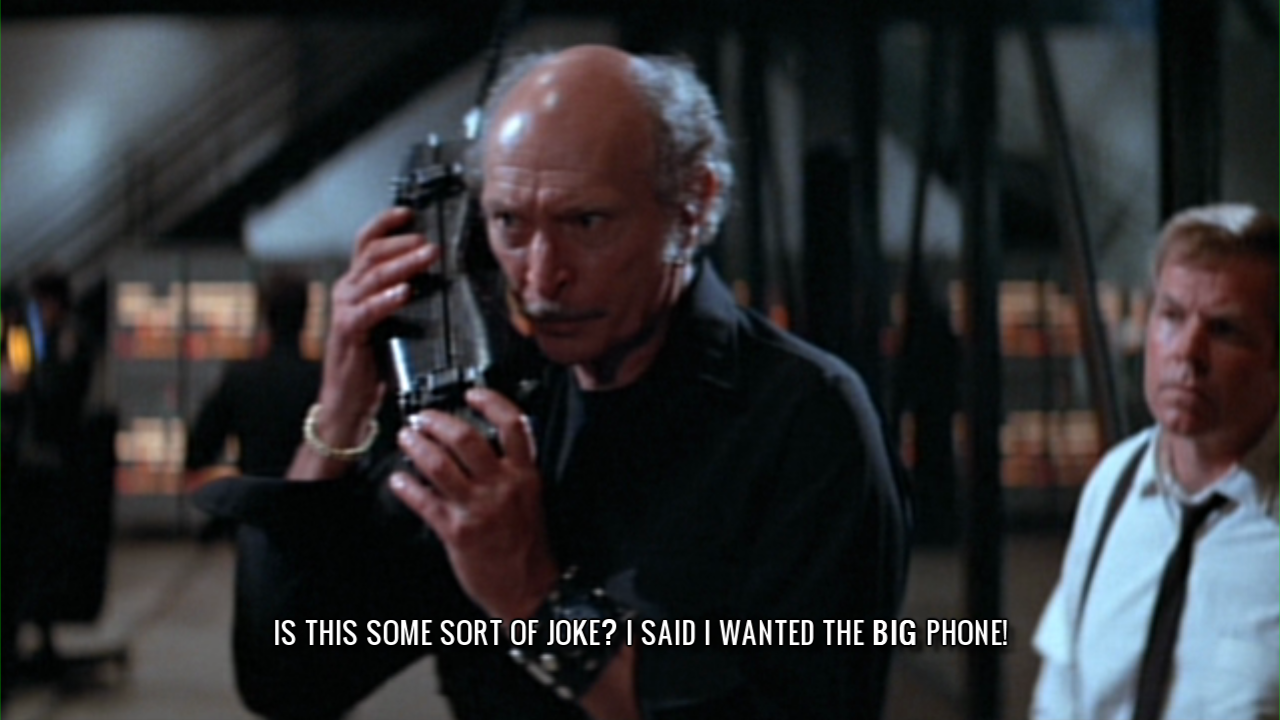 After burying a nail covered bat in the back of Baker’s head, Snake catches up with The Brain, Maggie, the President and Cabbie, and together they make it to the Brooklyn Bridge. The only thing that stands between them and the free states are the countless mines that litter the bridge. To make matters worse, The Duke and his men arrive to foil their prison break and get out themselves.

As the clock ticks away, they fall one by one. Either by the hands of the other group or by the mines. Finally Snake, The Duke and the President find the wall that blocks the far end of the bridge. Beaten and exhausted, Snake engages the final boss and it seems like a losing battle. Just when hope seems lost, the President of all people, blows The Duke away. Way to pull your own weight Mr. President. 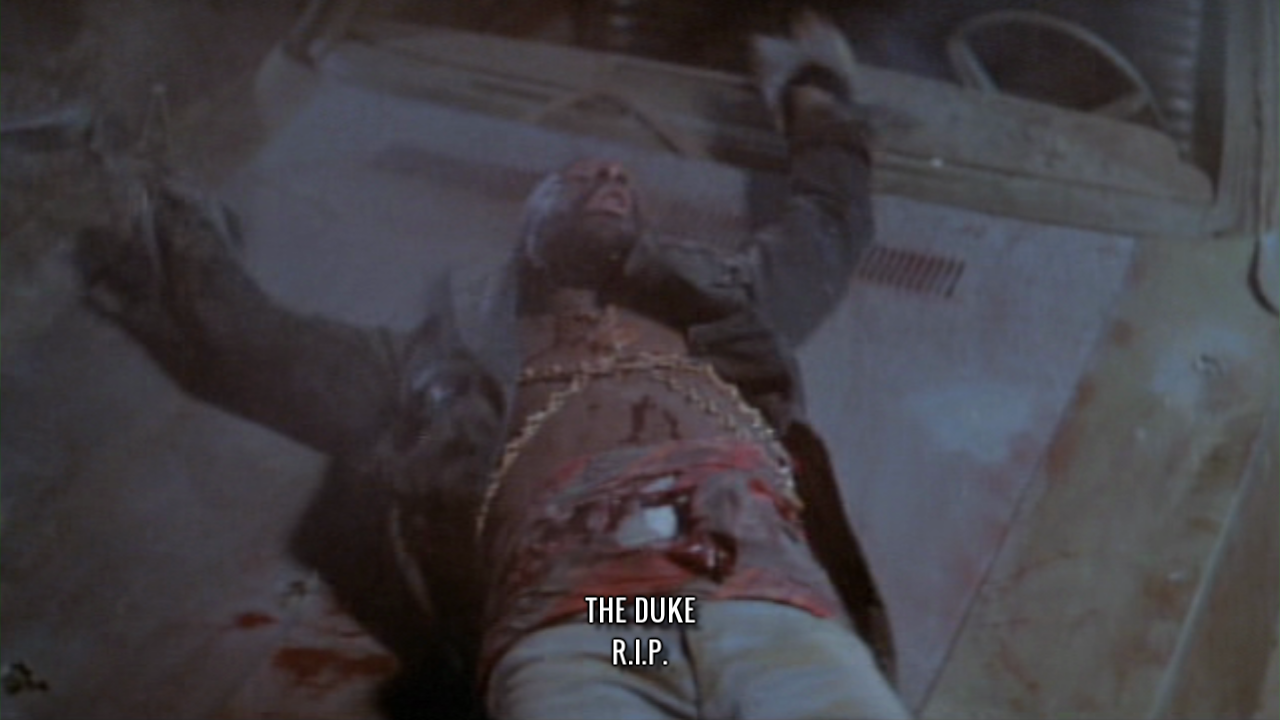 With the President rescued and Snake’s micro-explosives are deactivated, Snake commits one final act of rebellion. Remember that cassette tape that was so important? Well, on it was an explanation of how to create nuclear fusion that the President was going to share with the world. A gesture that would end the war. Our ol’ pal Snake had other ideas. He switched the tape with one he found in Cabbie’s taxi. As the President speaks live via satellite to the entire world, swing music can be heard instead of the recipe for cheap nuclear power. Please allow me to “slow clap” for Snake as the credits begin to roll.

THE VERDICT
Movies like “Escape From New York” really became defining of the ’80s. So many films from the era were dark, dirty, violent and bleak. I love ’em! Crime was on the rise, people thought Satanic cults were sacrificing babies and there was the ever present threat of total and complete annihilation brought on by soviet nukes. It was a good time for movies, and for thrash metal.

One of the strengths of this film, is also one of it’s weaknesses. This strength/weakness is Snake’s twenty four hour time limit. Every time I watch this movie, I distract myself from it by wondering what the rest of the United States is like. It’s mentioned that the country is at war, but with who? What about other criminal factions within in island? How involved is the “National Liberation Front”?, ect… I feel that these ideas would have been explored if the story were allowed to unfold more organically. But instead, it is forced along by the deadline. This is fine, but I just wish there was more. So many things are referenced or off handily mentioned. There is a whole world here and I want to learn about it.

In “Escape From New York”, we see another one of Carpenter’s unlikely heroes facing unimaginable odds of carrying out a plan of which he is thrust into. Snake is a strong silent type, who again, manages to be relatable. An “everyman” who appeals to it’s male viewers, and even maybe a little to it’s female viewers. After all, Snake is pretty dreamy. I think every guy who watches “Escape From New York” deep down thinks of himself as Snake. Minus the eye patch.

I love how Carpenter adds elements to his characters personality or back story that hints at a deeper point. Rarely is there blatant subtext in his films. Subtext is there, but it’s more of an attitude than a message. We see this with Snake’s distrust of the government and the military. Being a former military man himself, he known how far shit rolls down hill. But there is no grand speech or parody of any real world events. Just Snake being really pissed off at the powers that be, with his cynical anti-establishment view.

I’ve always appreciated this. Carpenter’s films aren’t preachy, and because of it his viewers, whatever their personal beliefs, are free to take in the material and interpret it their own way. This sort of thing really gives his work legs and is just one example of what a great story teller John Carpenter really is.

In conclusion, I highly recommend “Escape From New York”, as it is a work of classic bad-assery. Snake is great, the story is great, the effects and miniatures are great, the atmosphere is great, and even the soundtrack is great, again. Hmm, I wonder why that is. 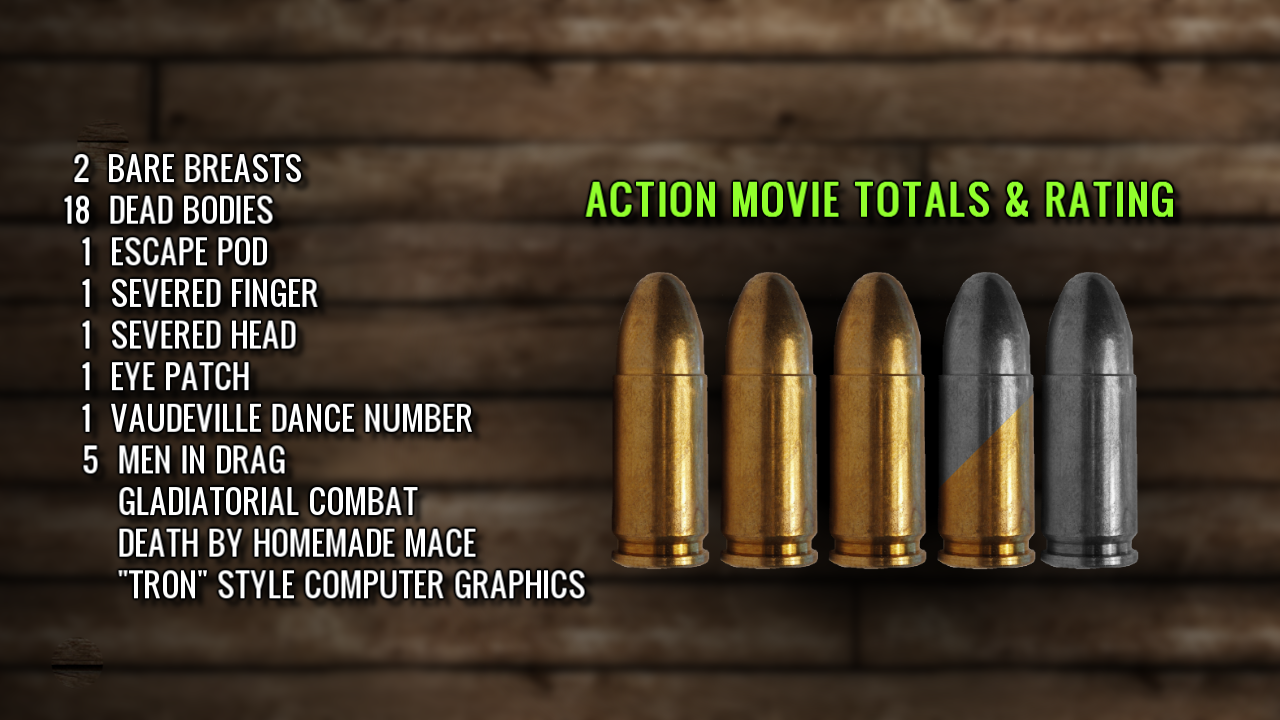 I’m Cory Carr and this concludes our ride on the “Action Movie Time Machine”. Until next time, Semper Fi!
For more from Cory, check out his website Slaughterfilm.com, where he and his good friend Forest Taylor record weekly podcasts, reviewing the films that are legendary, even in Hell!