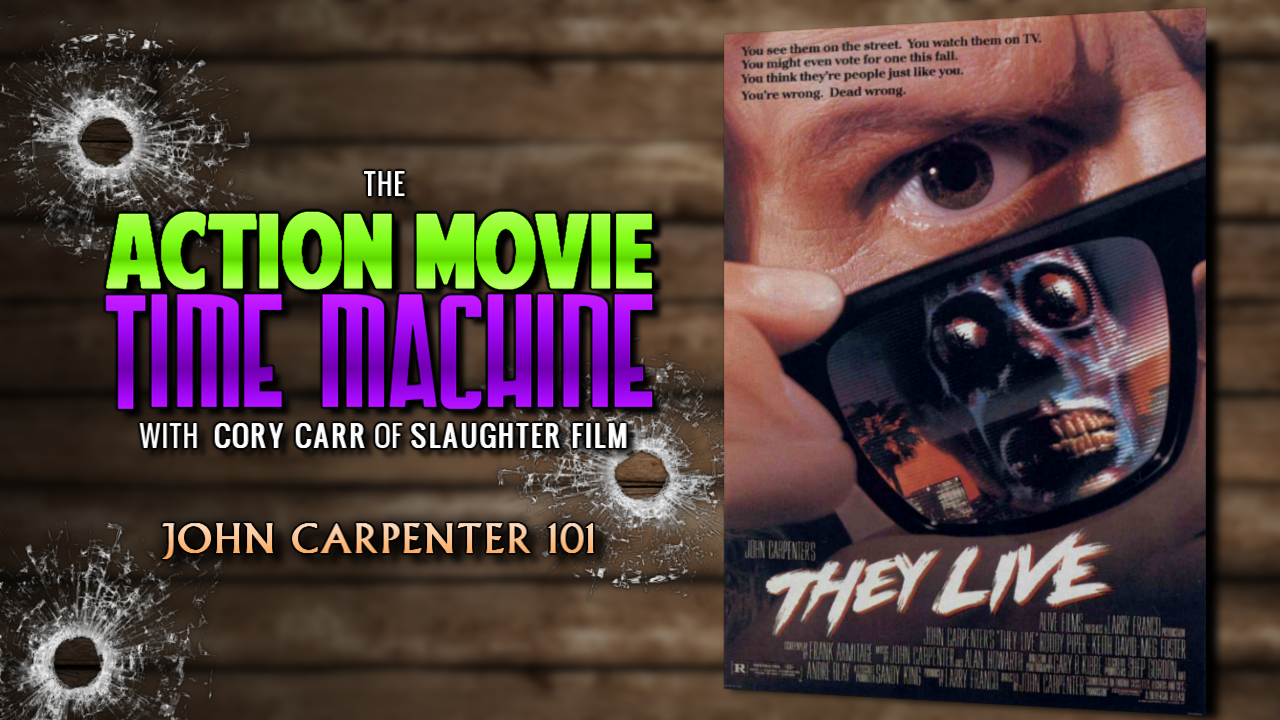 Continuing the John Carpenter retrospective that I kicked off a few weeks ago, I’ve decided to discuss my favorite Carpenter film, as well as one of my favorite films of all time “They Live“. I hope you like movies with social commentary, because this flick has so much commentary it’s falling out of it’s ass. And you don’t even need special sun glasses to see it.

The year is 1988. George H. W. Bush has just taken office as the President of the United States. The drug crack makes it’s presence known in cities across the country. “Teenage Mutant Ninja Turtles” debuts, teaching children everywhere that genetic mutations are awesome when they are taught ninjutsu and pro wrestler Roddy Piper saves the world from aliens in “They Live”.

THE SKINNY
“They Live” is about a drifter, Roddy Piper, who has just found his way into town. He is originally from Denver Colorado, but due to some economic drought, the drifter, who isn’t named in the film, is forced to migrate from city to city in search of work. By the way, it is only in the credits that the drifter is given a name, John Nada.

In this new town, John acquires a construction job where he meets Frank, Keith David. Frank gives John a heads up by helping him find a place to stay, which happens to be a hobo-shanty town on the outskirts of the city. Here John meets a few other friendly faces, including a prophetic street preacher and Gilbert, Peter Jason, the manager of a soup kitchen. 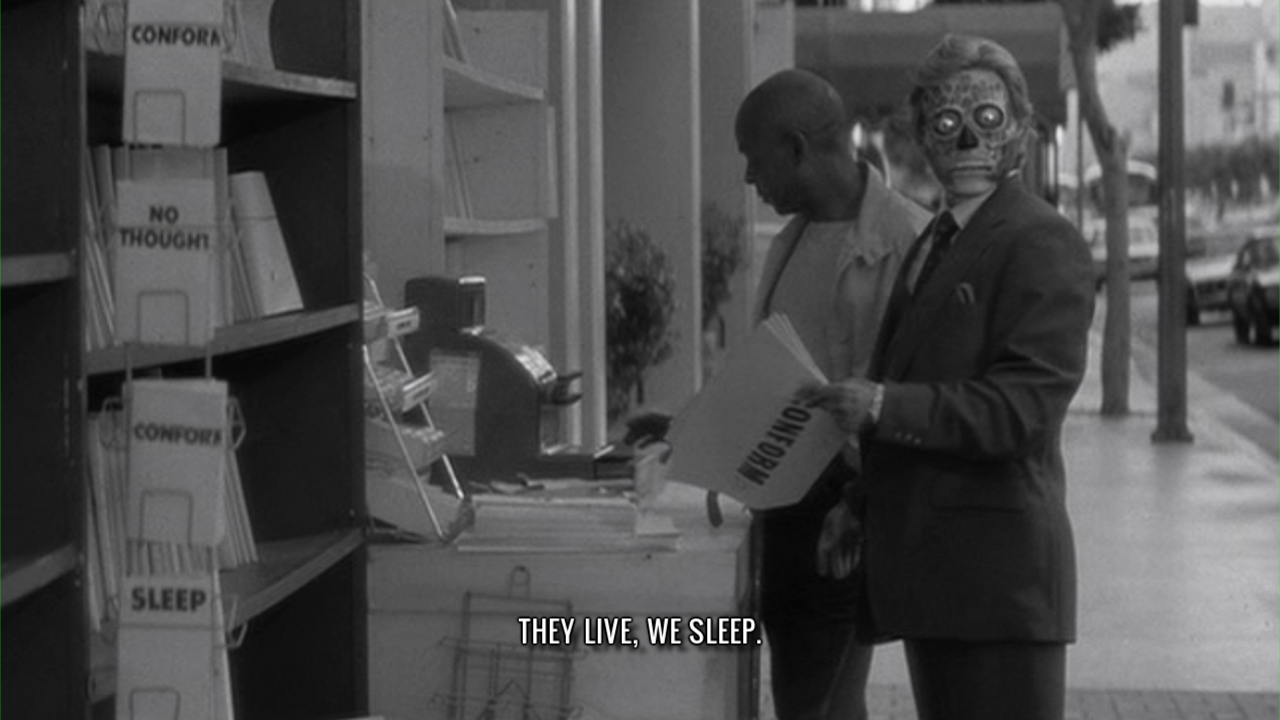 While between working and getting to know Frank, John begins to notice something strange about the near by church that has been working with Gilbert and the soup kitchen. John can hear the church choir practicing until two in the morning. Hmm, that’s strange. Soon after, John pokes around the church and discovers that church has been playing a recording of a choir. In fact there is no choir at all. Then he witnesses Gilbert and the street preacher loading the church vehicle with dozens of unmarked cardboard boxes. Is this church brewing up meth and selling it to the community? I wish. But the truth is that they are manufacturing special sunglasses.

While John’s curiosity continues to grow, he and the residents of the shanty town become annoyed with a strange television broadcast that cuts in overtop their regularly scheduled programming. This broadcast is of a man speaking directly into the camera, exclaiming that the oppressive elite are polluting the Earth’s air and water. “They are turning our atmosphere into their atmosphere.” He also carries on about increasing racial injustice and growing poverty levels… Ya know, it’s like listening to the news.

Anyhow, late one night John and Frank are woken by the sound of helicopters. The church as well as the shanty town are being raided by an army of police. The shanty town residence flee while their homes are bulldozed. 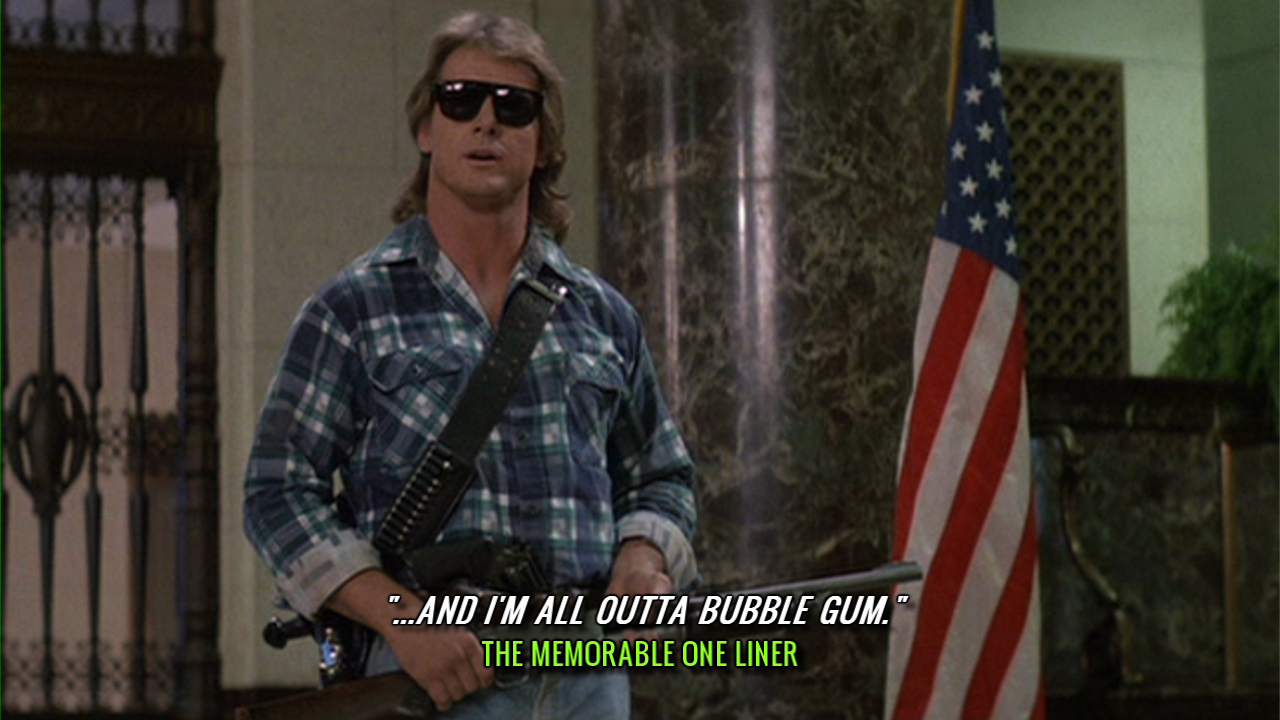 The next morning, John returns to investigate and discovers an abandoned box of sunglasses left in the church. As he travels through the city, looking for a new place to stay, he tries on a pair of the glasses to see what all the fuss is about. Aliens! God damn aliens, that’s what! With these special glasses, Hoffman lenses they’re called, John can see through all the electronically educed subliminal messages that read “consume”, “conform“, “reproduce” ,“do not question authority”, ect. But the kicker is, not all humans are human. Some are gross faced aliens.

John has unknowingly discovered an alien plot to dominate Earth, using humans as slaves to carry out their agenda. Whatever that happens to be. John continues to romp around town, insulting the aliens and even picking a fight with a few. He later tries to convince Frank that there are aliens among us. Frank reacts how any sane person would, by fist fighting John. This scene is one that lives in action movie infamy. This street fight combines boxing moves, professional wrestling and some down home dirty pool dick kickin’, which lasts about six minutes. Thar might not sound like much, but it’s choreographed how a real life street fight might unfold. It isn’t fast paced but it does look real. 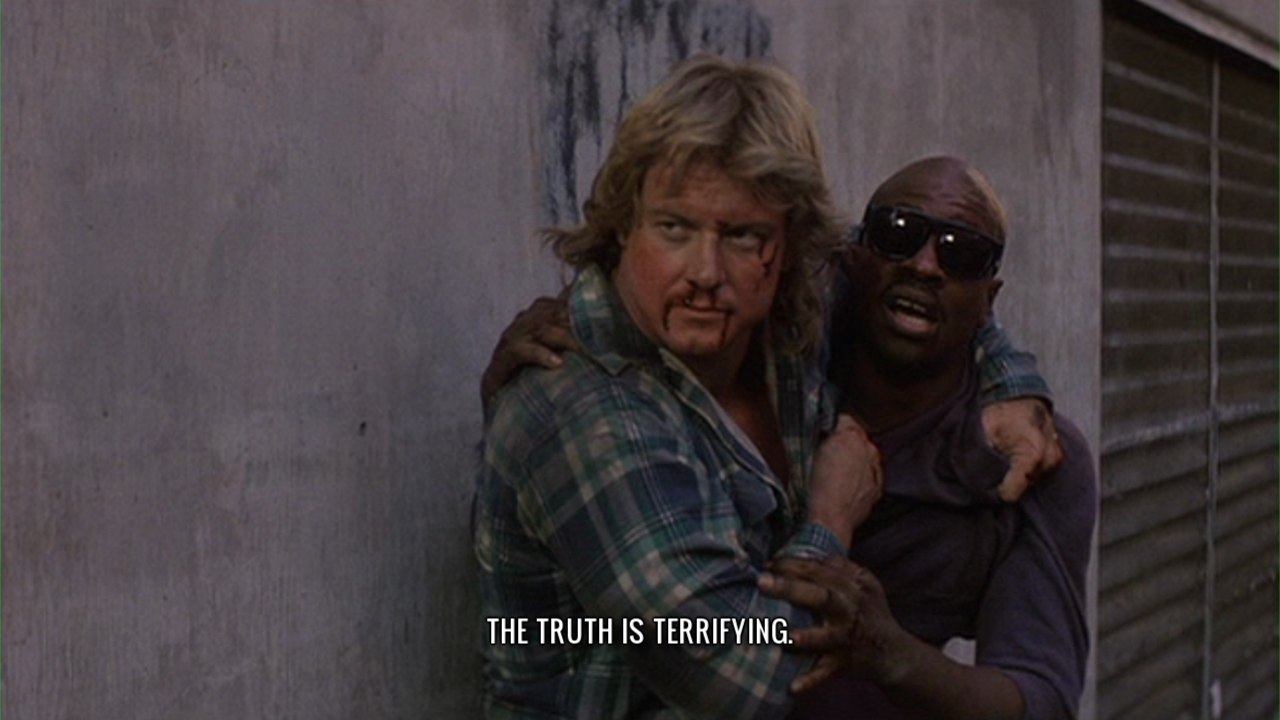 Long story short, John and Frank beat the living hell out of each other before John manages to get a pair of the Hoffman frames onto Frank, and he sees everything. The Duo track down Gilbert, who is secretly a part of the alien resistance and they learn that the local television station is being occupied by the aliens who are using it to broadcast the subliminal signal.

John and Frank are left with no other choice. They must break in, guns a blazing’ and destroy the transition tower. In doing so John and Frank accidentally use alien technology to teleport themselves into the basement levels of the television station, which doubles as the alien base. From here they make their way up to the roof — floor by floor — blowing away alien security guards. 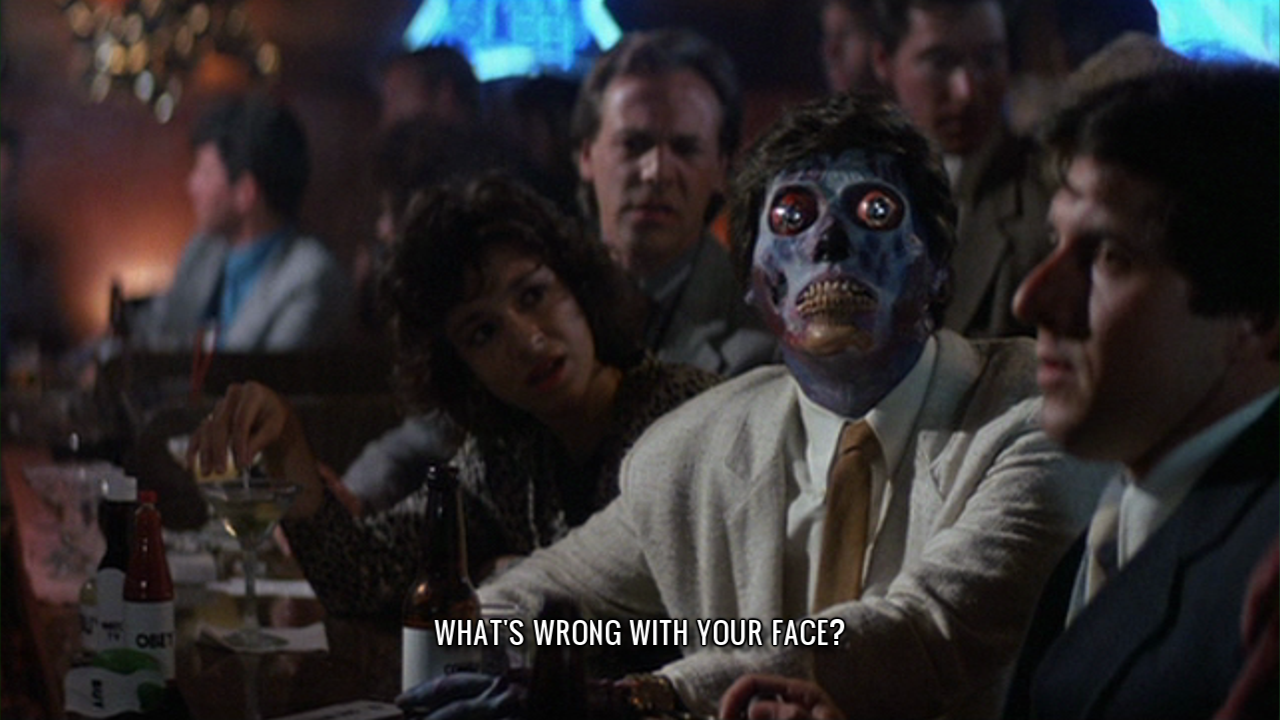 Long story short, Frank falls heroically as he fights the alien hordes and John manages to reach the roof, not before being shot himself. In true bad-ass fashion John whispers “fuck it” as he fires his gun into the transmission tower, ending the signal. In a last act of defiance, he flips the on looking alien security the bird as he dies. The remaining few moments of the film are the humans waking from their subliminal slumber. The End.

THE VERDICT
On the surface, “They Live” is a sci-fi/action film, in a similar vein as “Total Recall“. It has bad-ass action starring Roddy Piper. A man who couldn’t be a more perfect Carpenter “unlikely hero“, who spews countless one liners thru the duration of the film. “I‘m here to chew bubble gum and kick ass… and I‘m all outta bubble gum”, is a line I’ve heard quoted nearly as much as Schwarzenegger‘s “Get to the Chapa!”.

The machismo is multiplied when John teams up with Frank. Not only does their relationship make for some great entertainment (the back alley street fight), but their personalities are reflections of how many American felt about the economy and social inequality in the late ‘80. These sentiments seem pretty relevant even today.

Frank is bitter about major manufacturers laying off people when they need work the most. John is suffering from the same problems but is more optimistic about it. He is more willing to be patient and allow opportunity to come his way. And by opportunity, I mean aliens. These two points of view are another example of Carpenter’s skill of sharing a message in a film without it seeming preachy. He voices his opinion about a real life struggling middle class through the opinions of John and Frank, both of which aren’t the soul of the film.

Where this film really starts to standout is in it’s thought provoking sci-fi plot. The concept of an alien oppressor controlling, or at least manipulating the motivations of humans isn’t exactly original but is carried out in a more direct and vocal way. Carpenter uses the preying aliens to comment on the superficial and selfish shortcomings of American, if not all humans. The aliens subliminally coerce humans into consuming, reproducing, and not questioning authority so “we” become docile and are more easily manipulated. These subliminal messages are delivered through television, radio and print media in the same way Apple makes consumers think that their lives will be better if you all own the newest iPhone, or that women will seem less attractive if they aren’t wearing this seasons hottest fashion trends… Hmmm, I’m starting to understand why “American Idol” has such a loyal viewership.

“They Live” tricks the viewers into looking closely at their lives and makes them question who exactly is in control the way the aliens are in the movie. Is it politicians, the rich, corporations, banks, or something else? I could talk about this for days. I just love this concept as well as this movie. But I’m pre-disposed to shake my fist at the authority, so maybe “They Live” isn’t for everyone and I’m the only one wearing the sunglasses. 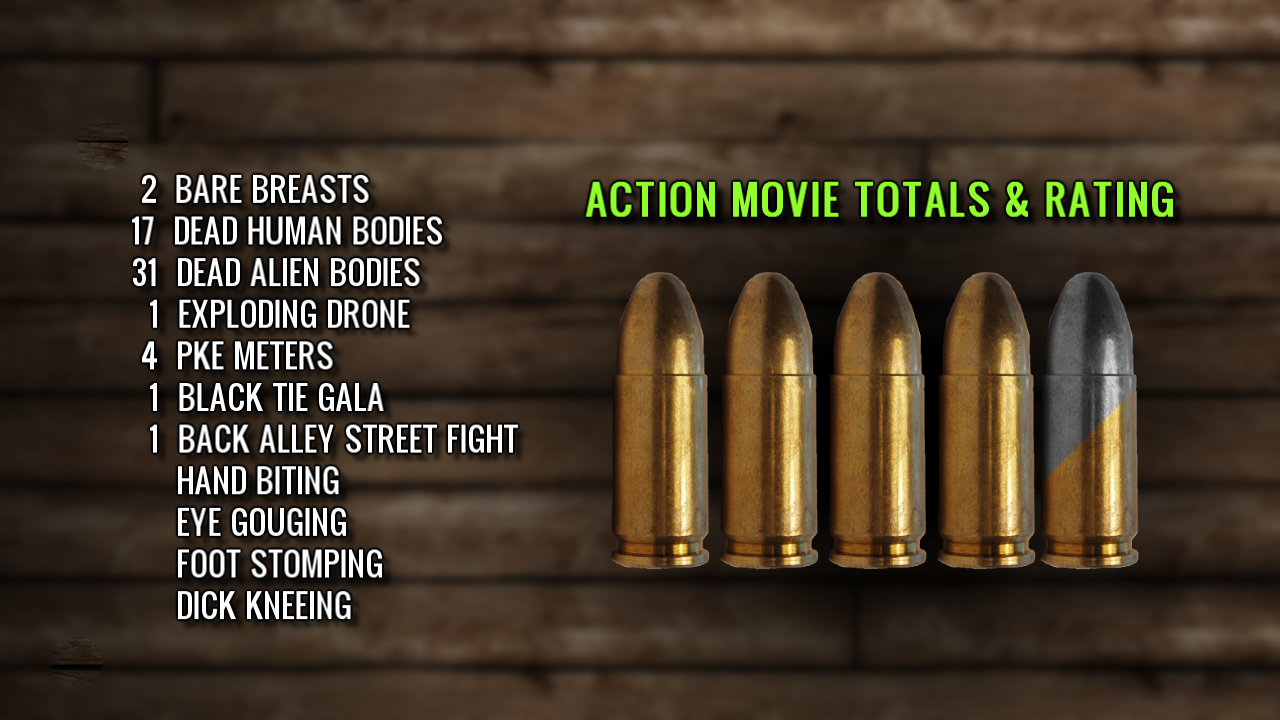 It might not be about terrorists or drug lords or returning P.O.W.s from Nam, or any other such typical ‘80s fair, but “They Live” is as smart and subversive as it is a quintessential ‘80s action movie.

I’m Cory Carr and this concludes our ride on the “Action Movie Time Machine”. And remember, they live we sleep!