Now that my love letter to John Carpenter has come to a close, I was unsure what film, or group of films I should visit next. Should I board the “Action Movie Time Machine” and venture to the ‘80s to track down ol’ Chuck, finally, or maybe the ‘70s for “Dirty Hairy“? Then it dawned on me. Not to long ago I sat down with a few friends to watched “Point Break”. They wouldn’t shut up about how great it was. I hadn’t seen it before, but it was a film who’s reputation I was familiar. A gang of presidential mask wearing bank robbers gain a reputation for their handy work while surfing between jobs. Oh, and Nick Frost’s character, Danny Butterman, absolutely LOVES “Point Break” in “Hot Fuzz”. Well I guess If I wasn’t interested before, I now have my seal of approval. In short, I watched it and liked it, so “Point Break” it is.
The year is 1991. Paul Reubens, Pee-Wee Herman, was arrested for masturbating in an adult movie theater. Accusations of sex abuse and steroid use drew all kinds of heat on to Hulk Hogan and the WWF. All this and Keanu  Reeves learns to surf.
THE SKINNY
The film begins with Special Agent Johnny Utah, Keanu Reeves, who has recently graduated from the FBI academy and been assigned to work band robbery detail in southern California. Upon his arrival he is partnered up with veteran agent Pappas, Gary Busey. Pappas is one of the older members of the team. He’s seen and heard it all, and as a result he’s both jaded by his job, and regarded as a bit of a nut by his co-workers. 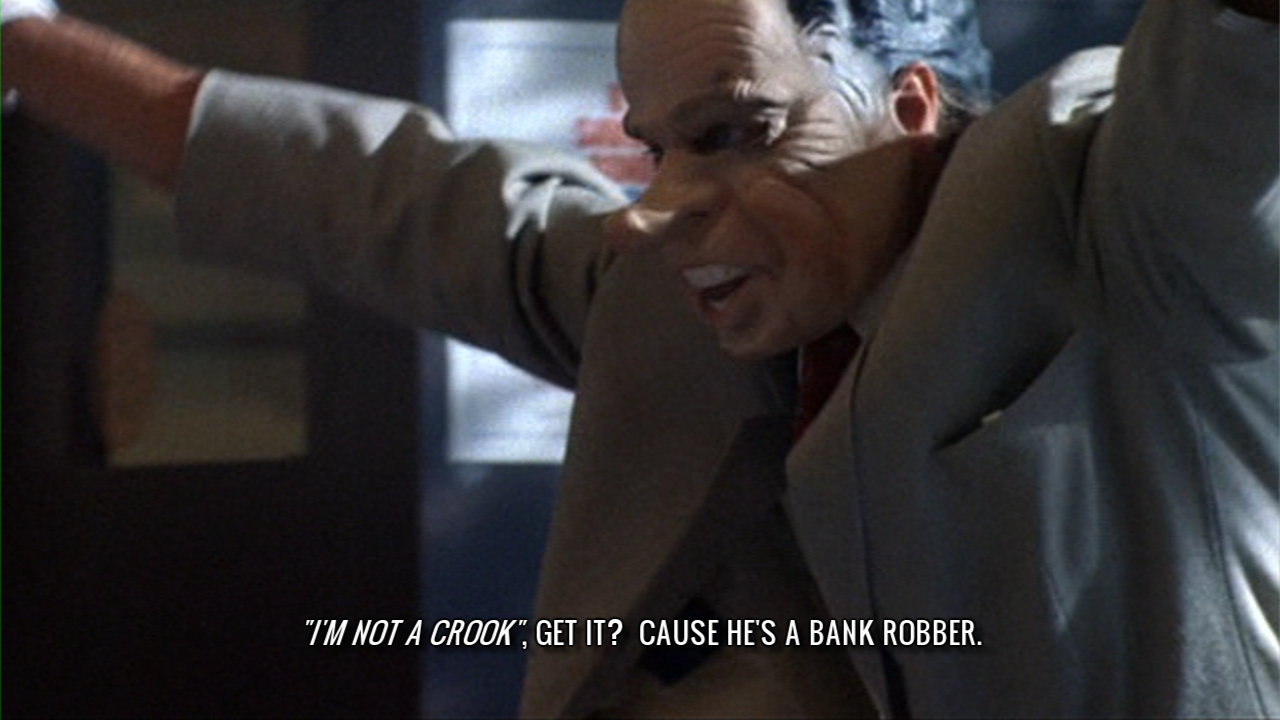 Together the new partners pick up where Pappas left off on a case involving a group of bank robbers who go by the “Ex-Presidents”. They call themselves this because they chose to wear presidential masks during their heists. There’s a Nixon, Carter, Johnson, and Reagan. If you were ever confused by some joke or parody from the ‘90s that involved a mask of a president, this movie is it’s inspiration.
The Ex-Presidents have acquired quite the reputation for being professional. No one is ever injured, they only take what money is in the teller drawers and they are in and out in ninety seconds. They leave no clues and few witnesses, and have successfully robbed twenty-seven banks in three years. The only info that Pappas has been able to assemble about they group is that they may be surfers. A security camera caught one of the Ex-Presidents mooning, which revealed a tan line. Later trace elements of wax was in a footprint left by of the robbers and may be board wax. And finally, the Ex-Presidents only rob during the summer months, when the waves are the best for surfing. 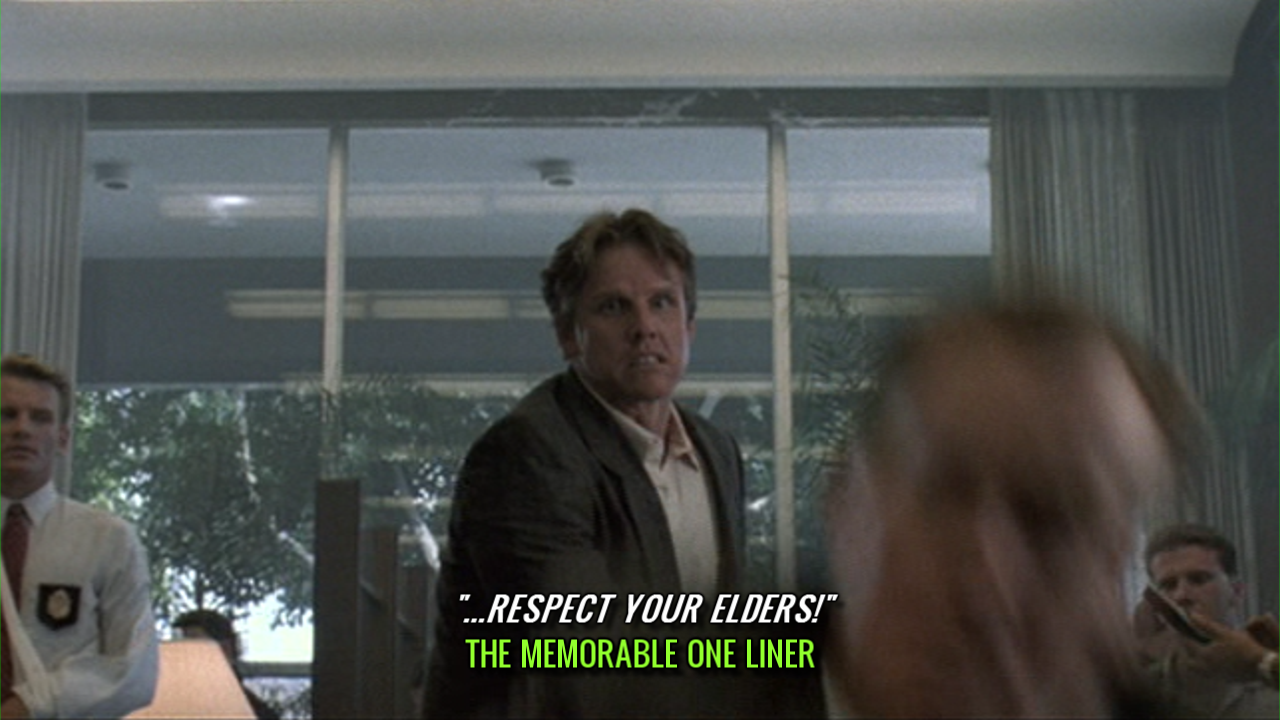 For this thin but compelling theory Pappas’ co-workers give him shit. To them, Pappas might as well be talking about the Kennedy assassination or aliens or something. But Utah is convinced. The two devise a plan to send Utah undercover and into the ocean. He will learn to surf and in doing so he will make surfer friends who he will, hopefully, get some hot information out of. This plan works pretty good, if you overlook almost drowning and getting his ass handed to him time and time again by other more experienced surfers.
Soon Utah meets Tyler, Lori Petty, a tough surfer chick who agrees to show him the surfing ropes and later they fall in love. Tyler becomes Utah’s window into the local surf community and introduces him to Bodhi, Patrick Swayze. Bodhi is a bit of a local surfing guru. He has a crew of young men and women who cling to his devil may care lifestyle. Bodhi isn’t just some thrill seeking adrenaline junkie, which he is, he is someone who has a rich understanding of what being alive truly is and how everyone should push the boundaries to better live their lives and experience freedom. There is a moment in the film when Bodhi reminds his crew just why they took on this lifestyle by saying; “This was about us against the system. That system that kills the human spirit. We stand for something. We are here to show those guys that are inching their way on the freeways in their metal coffins that the human spirit is still alive.” 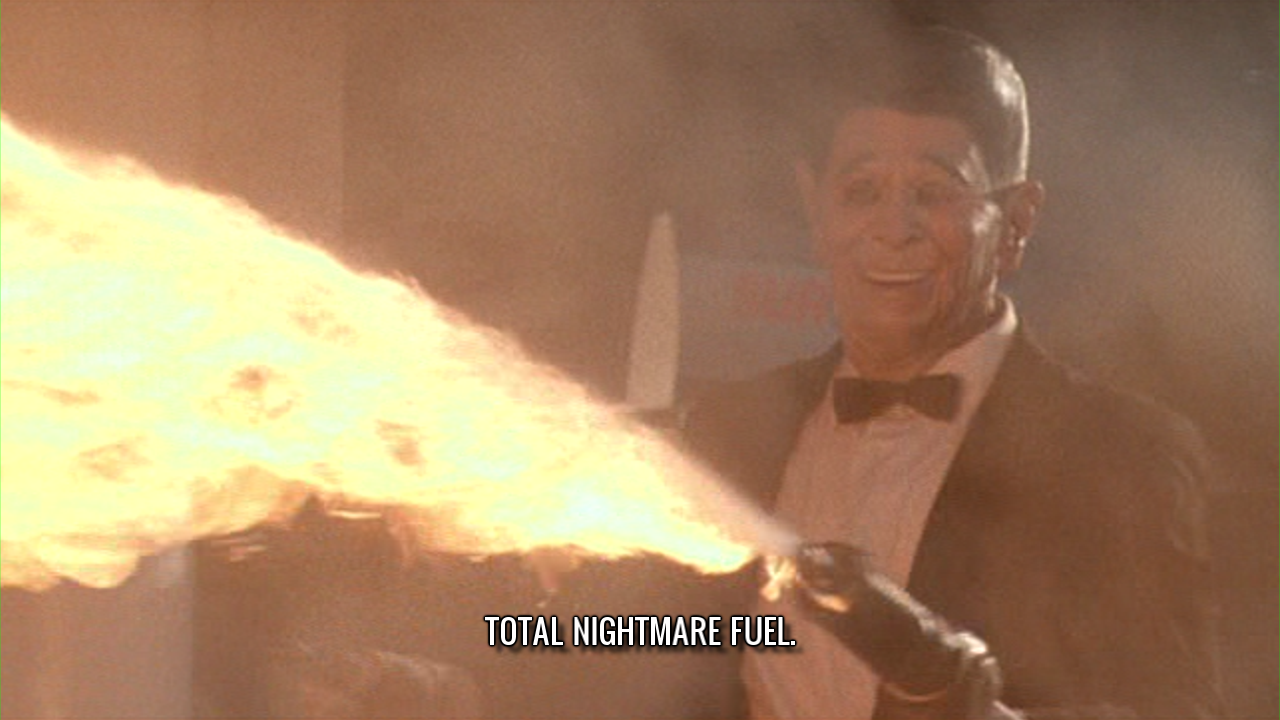 As Utah starts surfing more with Bodhi and his crew, he begins to understand the more spiritual connection the guys have developed with each other, as well as nature (the surf) and thrill seeking. Bohdi gets Utah to open up and in turn gains his trust and later mutual respect and admiration. This friendship later gets between Utah and his duty when he makes the discovery that Bodhi and company are in fact the Ex-President, and now he has to bring ‘em in.
A lot happens between the middle and end of the film, none of which is bad, but I feel obligated to skip over some so I don’t get too carried away with this synopsis. Consider it self-censorship to prevent spoiling plot. However, I do feel compelled to mention the often referenced “scream while shooting in the air” scene made popular by “Hot Fuzz“. Utah can’t yet prove anything but suspects Bodhi is involved with the robberies. Well one day Utah happens to cross paths with the Ex-Presidents while they are knocking over another bank. This leads to a foot chase. Utah follows Reagan/Bodhi down a hill and blows out his knee in the process, which is an existing high school football injury. Utah can’t follow any further. He pulls his gun and takes aim, but the idea that he may be shooting his friend is too much for him to handle. Instead Utah lets out a scream and unloads his gun into the air. It’s a little goofy, but it illustrates just how much he respects Bodhi.
As the chase drags on, Utah gets close to capturing Bodhi. He finds himself on a plane flying over Mexico and Bodhi has just jumped from the plane in an escape attempt. To catch Bodhi, Utah follows him. He screams “Fuck it!“ and jumps from the plane. Without a parachute… WITHOUT A FUCKING PARACHUTE! The first time I saw this I was genuinely, “What the fuck?!”, surprised. Utah manages to float down to Bodhi, pull his parachute cord and hang on for dear life until they reach the surface of the Earth. Upon landing, Utah blows out his knee, again, and he can’t continue the chase.
Over the next few years Bodhi continues robbing banks in several different countries to afford his freedom seeking surfer lifestyle. Consider these crimes bread crumbs and Utah follows his trail all the way down to Australia. Australia is known for it’s ideal surfing coasts, not to mention there happens to be a ”Fifty Year Storm” approaching. One that is guaranteed to make the most hardened surfers wet in their pants and Utah knows Bodhi will be there. 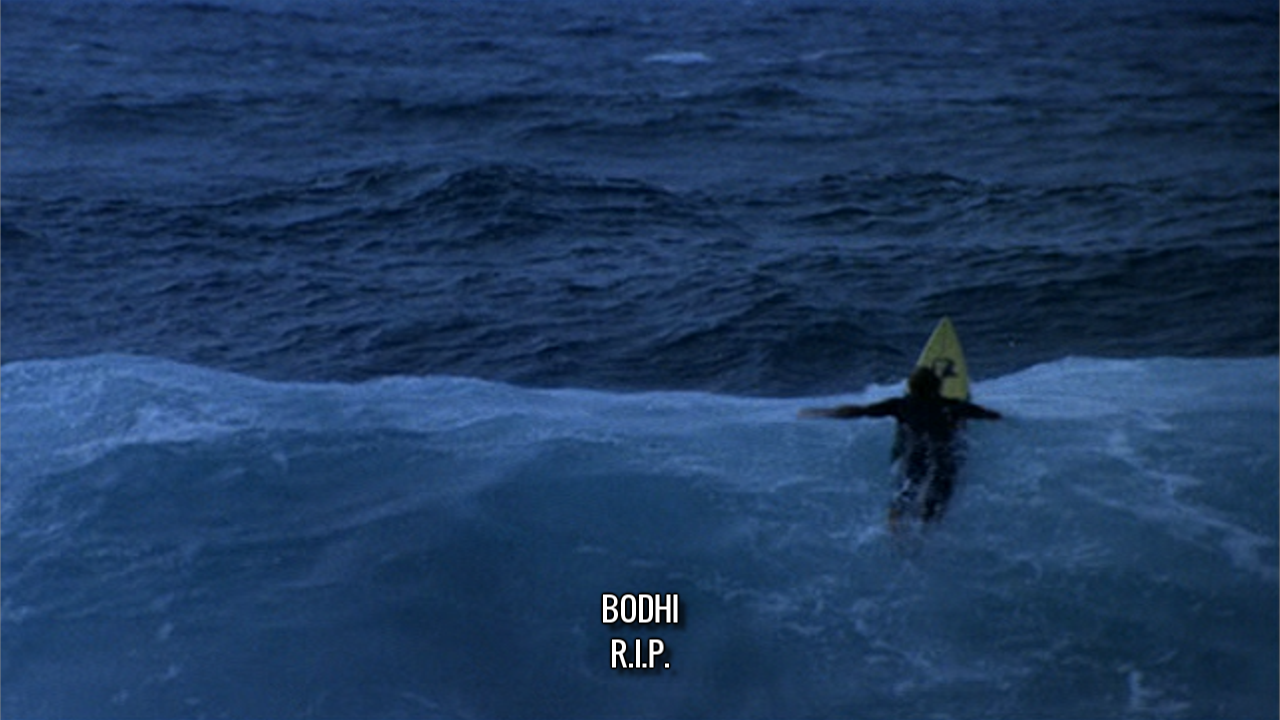 When Utah finds Bodhi on the beach they have words and then they have fists. As the local police move into position, surrounding Bodhi, Bodhi begins pleading with Utah — telling him that he won’t make it in prison without his freedom. Utah grants him his freedom, temporarily, to catch a ride on one of the death defying fifty foot waves. After all it’s a once in a life time event, and as a friend, he understands just how much it will mean to him. As Bodhi paddles out into the waves, Utah quietly walks back to his car. Utah overhears a police officer say; “Okay, we‘ll catch him when he comes back in”, to which Utah replies “He‘s not coming back“. The End.
THE VERDICT
What makes this film great and highly recommended to both action movie fans as well as people who typically thumb their nose at action movies, is that there is more here than just car chases and gun fights. “Point Break” is a hidden gem within the vast wasteland that is action cinema.
It is wonderfully directed by Kathryn Bigelow, Zero Dark Thirty, The Hurt Locker &Strange Days, who, in my opinion, perfectly captures the beauty, freedom and danger of the surf and skydiving. Not to mention, she was able to weave the Utah/Bodhi friendship in just the right way, allowing it to become the focal point of the film. Similar to “Heat”, “Point Break” becomes more about the relationship between the cop and robber, than the actual crimes themselves.
Utah and Bodhi develop a bit of a bro-mance. They each appreciate the others freedom seeking nature and grow to admire each other, which later becomes the center of the films conflict. Utah is forced to hunt down his best friend and Bodhi is driven to break his own personal rules and even kill in order to ensure his escape. In fact Bodhi is even willing to die then be locked up. I can’t speak for everyone, but I was buyin’ what both of these guys were sellin’.
On a similar note, Bodhi is a total bad-ass with an existential life philosophy. Hmm sounds a lot like Swayze’s character from “Roadhouse”. Another action movie must see, if I do say so myself.
The only negatives I found in this film is its goofy surfer lingo and the acting. Not all of the acting, but there are a few deliveries Reeves gives that are less than what they should be. But hell, people have been saying that about his acting for years. On the other hand, Busey’s intense over acting, no matter how wild, is just great. 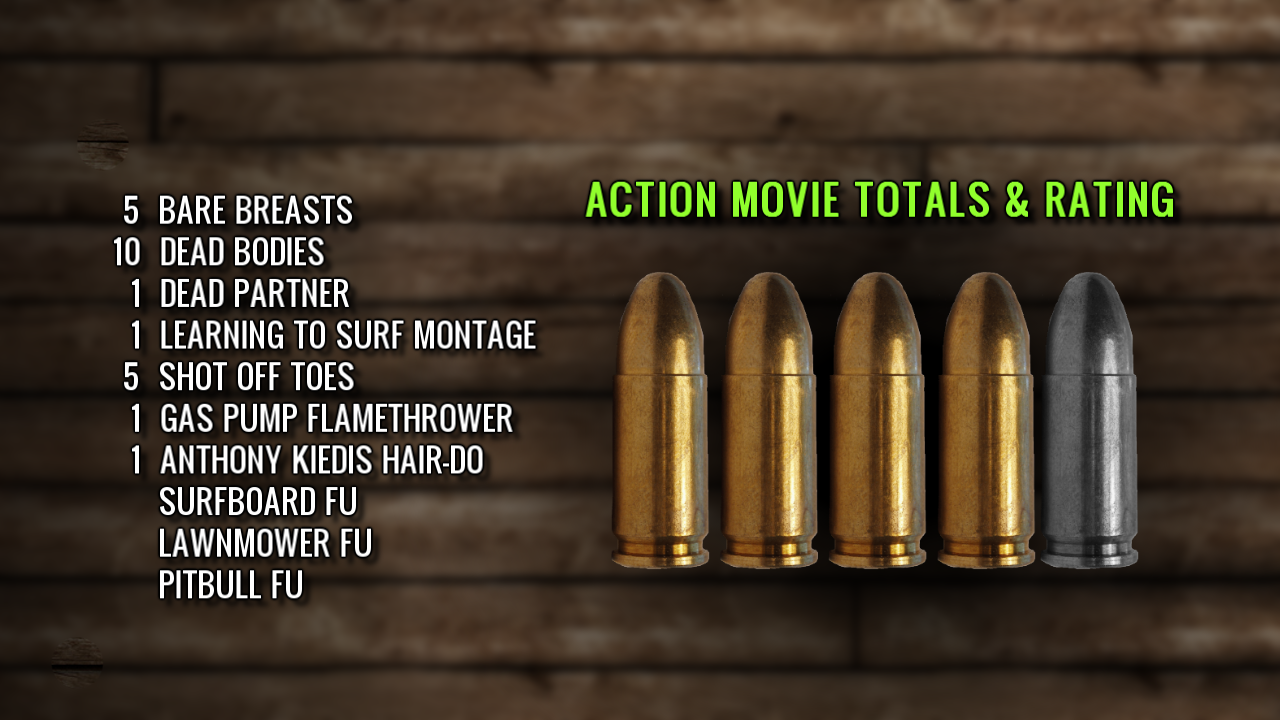 If you‘re willing to overlook its flaws, you will see that “Point Break” is a great film, let alone great action film.
I’m Cory Carr and this concludes our ride on the “Action Movie Time Machine”. And remember, freedom isn’t free. Semper Fi!
For more from Cory, check out his website slaughterfilm.com, where he and his good friend Forest Taylor record weekly podcasts, reviewing the films that are legendary, even in Hell!