The year is 1994. Teenagers around the world mourned for the loss of Kurt Cobain. “Forest Gump”, “The Lion King” and “Pulp Fiction” all shared the silver screen together and Sony released the Playstation, revolutionizing the way future games would be published. Also a bus was fitted with a bomb and used to terrorize L.A. commuters in “Speed”.
In 1997 “The Simpsons” parodied the title “Speed” in the episode “The Springfield Files” in which Homer says; “I saw this in a movie about a bus that had to speed around the city, keeping its speed over fifty, and if its speed dropped, the bus would explode! I think it was called “The Bus That Couldn’t Slow Down”. There is never a bad time to quote The Simpsons.
THE SKINNY
The film begins with Los Angeles police officer Jack Traven, Keanu Reeves,and his partner Harry Temple, Jeff Daniels, as they respond to a call that there has been an explosion inside an elevator shaft of a down town office building. The bomber is demanding a ransom of three million dollars be paid or he will trigger an explosion – cutting the elevators cables – in turn killing the people on the elevator. 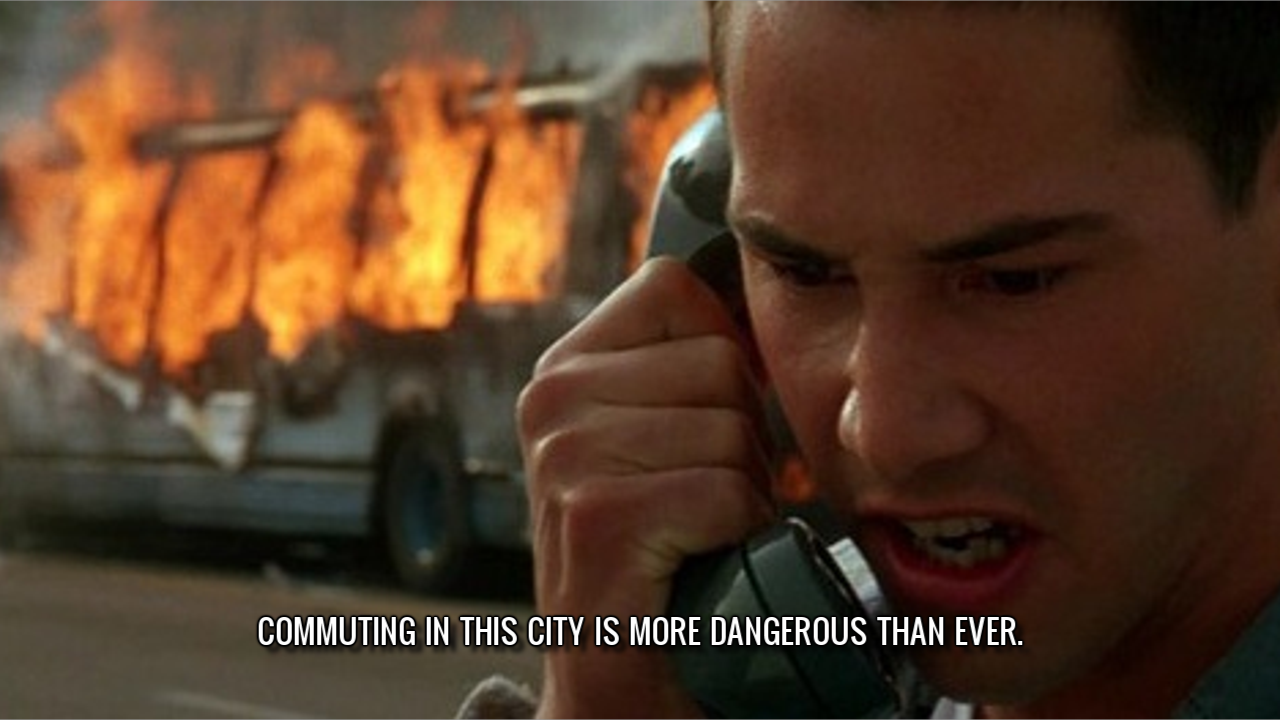 Suspecting that the bomber isn’t playing fair, Jack thinks up a plan to remove the hostages from the equation involving a rooftop crane that he uses to help support the weight of the elevator. Howard Payne, the bomber played by Dennis Hopper, is the type of guy who is very meticulous and always seems to be one step ahead of the game. Payne happens to be keeping a close watch over the elevator to make sure he has the upper hand. Hidden on another elevator and listening in via a microphone, Payne catches wind that police are up to something so he decides to blow elevator anyhow and get the hell outta there.
Jack now suspects that the bomber is near by. He and Harry search the fraught elevators and eventually find Payne. Again Payne has a backup plan. Rather than be arrested and spend his last few years in a jail cell, he blows himself up with a suicide vest. This is one of my favorite scenes of the film. 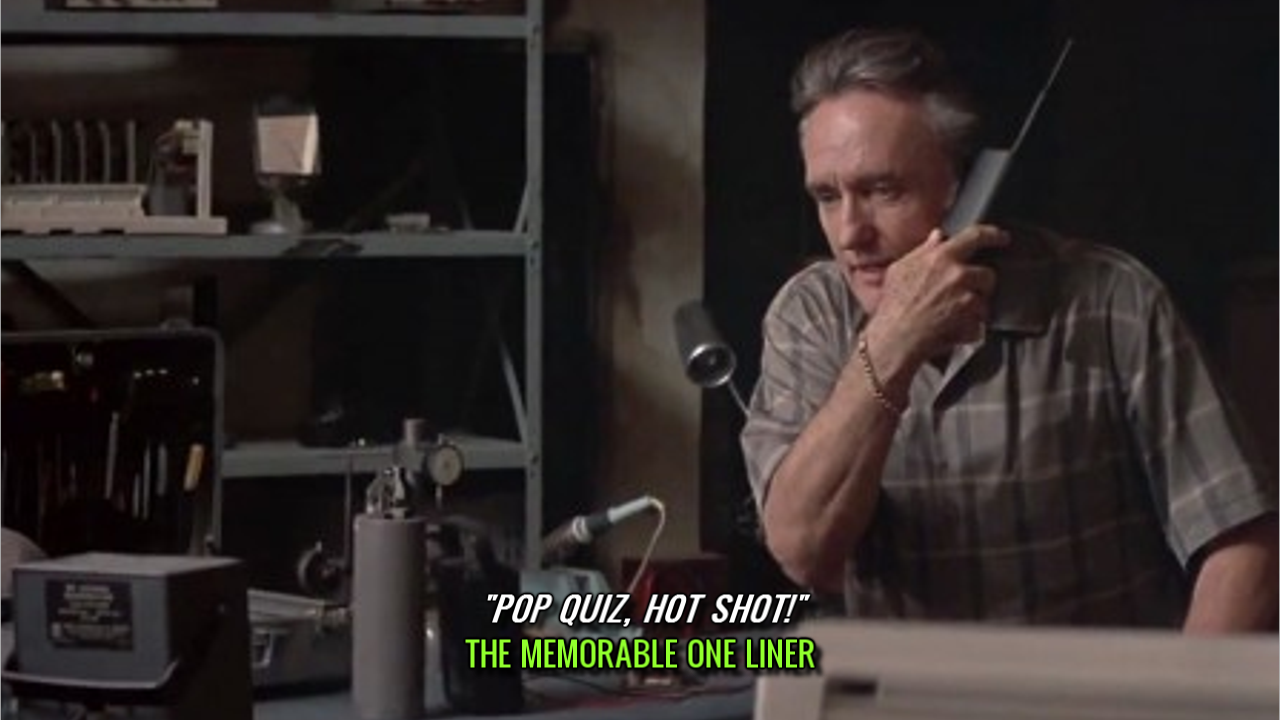 Days later Jack has a run in with Payne who, surprise, is still alive and pissed. The three million dollars was going to be Payne’s retirement nest egg and now he wants revenge against Jack. He calls Jack on the phone and informs him that somewhere in L.A. there is a bus fitted with a bomb. If it’s passengers are going to survive Jack will have to located it and get aboard. But there are rules ya see… First, no one is allowed off the bus. Second, once the bus reaches fifty miles per hour it must continue at that speed or it will explode.
For the next hour of the film Jack, now on the bus, tries his best to navigate the busy L.A. streets while keeping the bus above fifty miles per hour and trying to think of a plan to get the passengers to safety. Jan de Bont does a hell of a job directing because, as simple as this concept is, it never gets boring. In fact it’s relentless. There is enough going on to keep the viewer interested and enough suspense to keep them on the edge of there seat. In this time Jack tries to unload the passengers, disarm the bomb, fist fight frantic passengers and even ramp the bus, I’m not even joking, over a fifty foot gap in an overpass that is under construction. Of course this is the doing of young Annie Porter, Sandra Bullock, who has been volunteered to drive while Jack does a little bit of this and that. 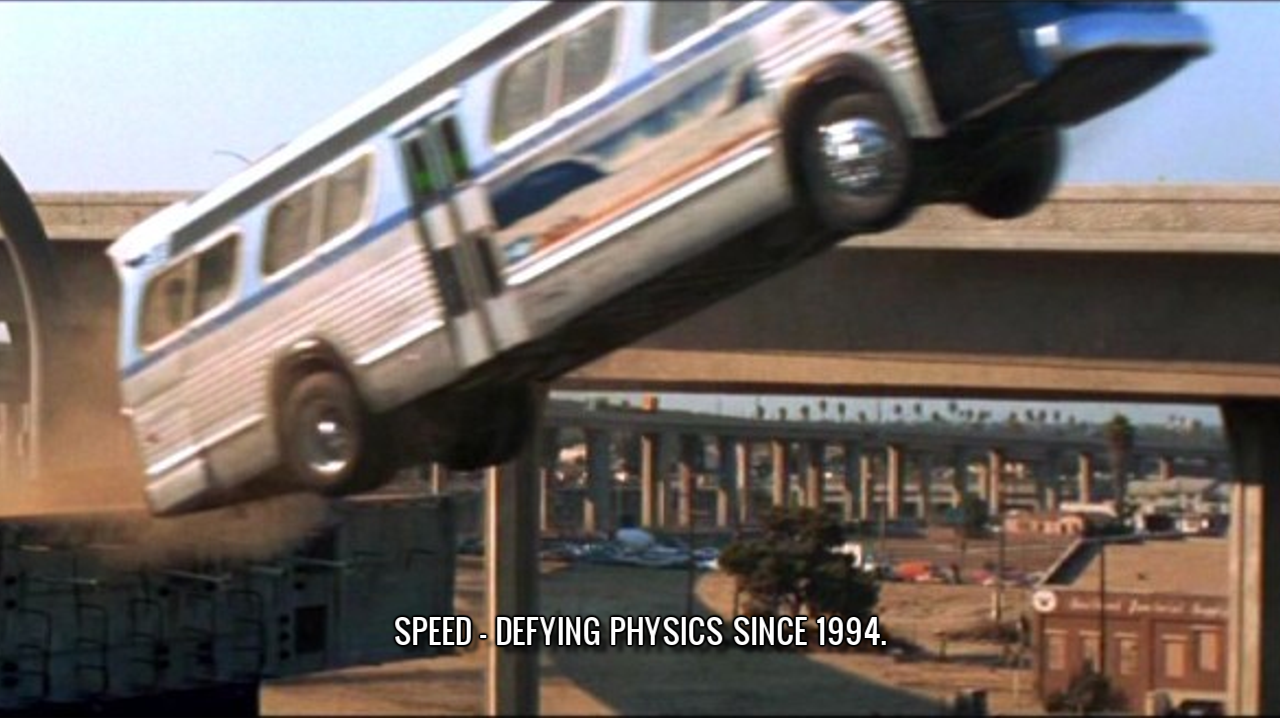 Jack struggles to understand how Payne knows what is going on in the bus at all times. The police close off air space around the bus from news choppers, but that doesn’t help. Finally Jack gets the upper hand when he realizes that the safety cam located at the front of the bus is transmitting a to an undisclosed location where Payne has been watching this whole time. Jack has his tech savvy police pals record and transmit footage in a loop so Payne is unaware that the passengers are being evacuated.
Meanwhile, Harry is doing his best to track down Payne, who it turns out is a former police officer who worked in the bomb squad. Payne was forced into retirement after blowing off his thumb. Payne risked his life for years doing a dangerous job and in return all he got was a lousy gold watch as a retirement gift. This is the heart of Paynes motivation. 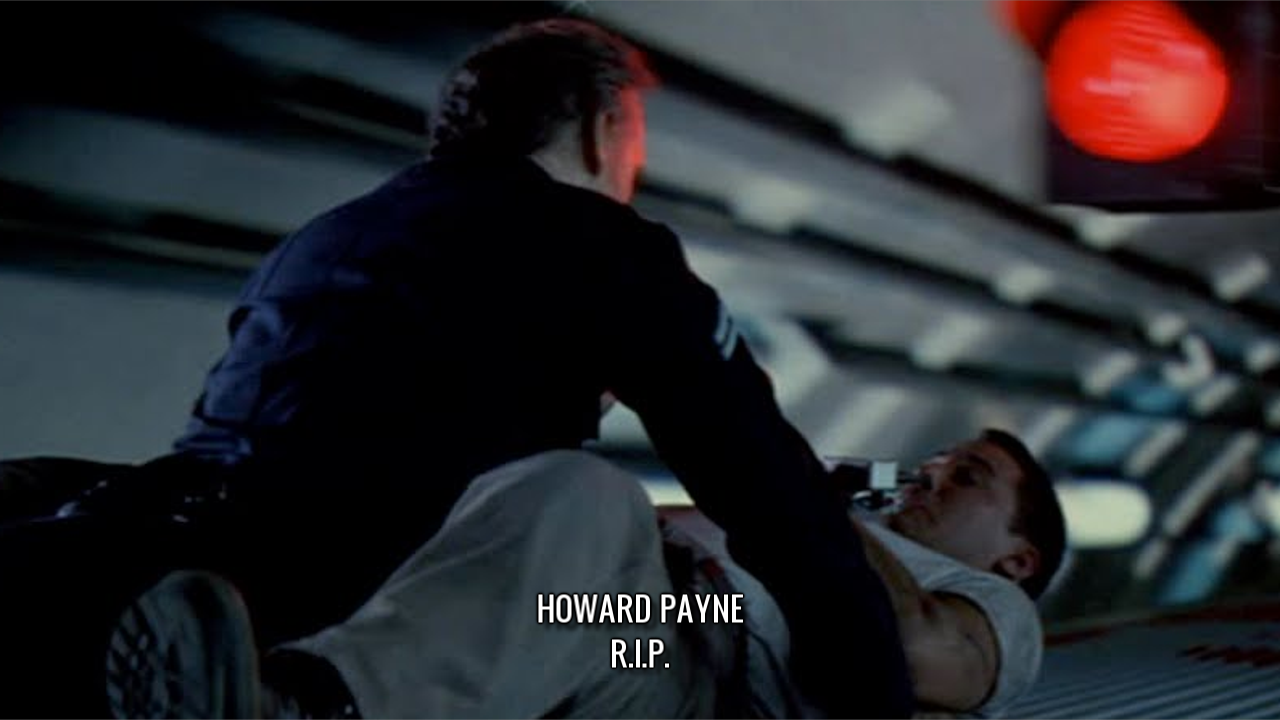 With the passengers safe the film becomes a man hunt for Payne which leads into the busy L.A. subways with Annie as a hostage and Jack in hot pursuit. This leads to a fistfight on top of a runaway subway car. As Jack and Payne tussle around, Jack eliminates Payne by decapitating him against a light mounted to the ceiling of the subway. The car crashes and Jack and Annie emerge unscathed and fall in love. The End.
THE VERDICT
“Speed” was a HUGE success in 1994. This movie was the only thing people talked about that entire summer. The idea of putting a bomb on a bus, triggered by it’s speed, was just so simple and yet tremendously effective. It essentially turned two thirds of the film into a high speed chase.
Beyond that, “Speed” is a chess match between Payne and Jack. Which spaces can they occupy without losing anything and how they can get the other guy to fall on the spaces that will do the them in. It’s about leverage.
Speaking of leverage, this reminds me of my favorite scenes in “Speed” and one of my all time favorite scenes in all of action movies. The one in which Jack shoots Harry. Early on, after the people are rescued from the elevator, Jack and Harry track down Payne somewhere else inside the building. Payne gets the drop on Harry and tried to use him as a temporary hostage in an escape attempt. So what does Jack do? Lay down his weapon and allow Payne to escape? Raise his weapon and blow Payne away? Nah! Instead he shoots Jack in the leg. The idea being that if a cop is willing to shoot the hostage, the hostage taker no longer has any leverage. Brilliant! This may have been the first time a movie taught me how to think outside the box and I will never forget it.
Over all this movie holds up, but there are a few areas were the film is lacking.
First the bus ramp scene. I don’t give a shit in what kind of “in a perfect world” scenario we’re talkin’ here, that WOULD NEVER HAPPEN!
Second, when Jack and Annie finally escape the bus, it continues to drive unattended as it loses speed and eventually explodes. The thing is, it explodes just as it collides with an airliner on the runway of L.A.X. So Jack saved the lives of eight or ten people on the bus, but what about the passengers on the airplane?! I assume it was empty, but WHAT THE FUCK?!
Hmmm, the movie begins with a bus that drives into an airplane, and ends in the subway. This movie could have been called “Planes, Trains & Automobiles”. 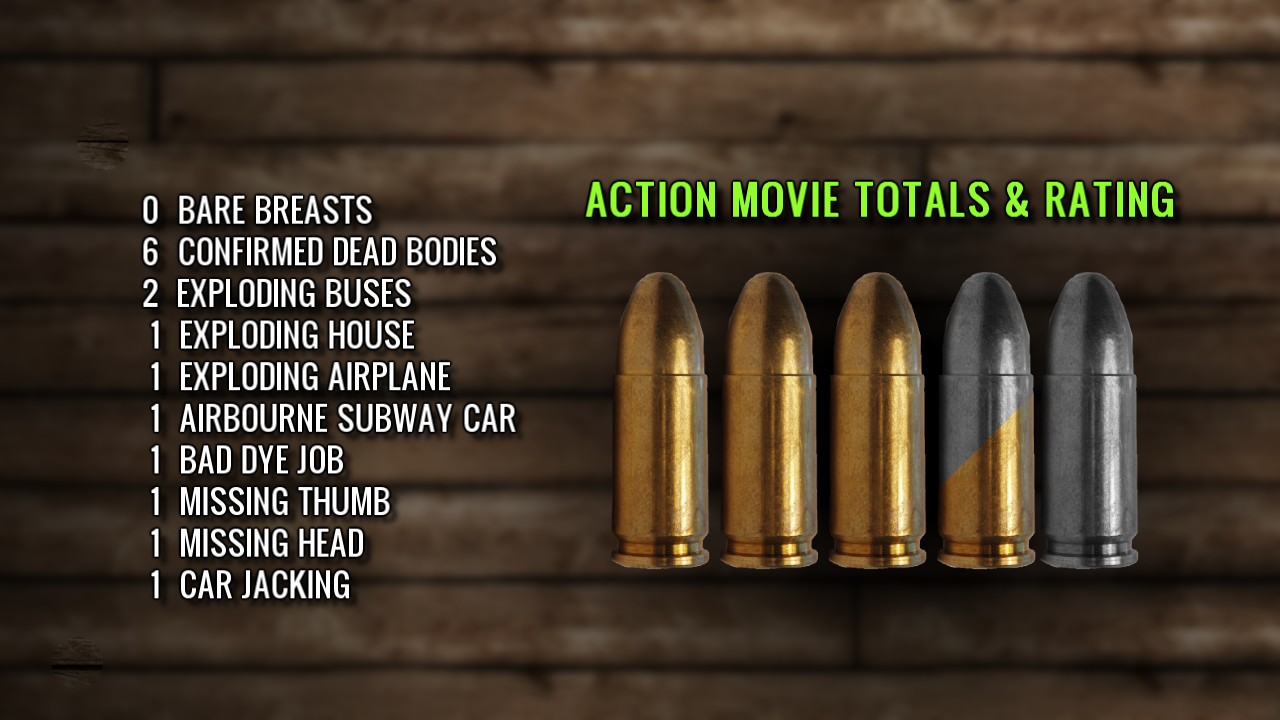 “Speed” is one of those movies that, over time, you’ll only remember the tropes that were so often parodied when it was released, but when you sit down and re-watch it, it will remind you just how good it is. Check it out!
Of course this was followed by “Speed 2”. A movie about a boat… and no one seemed to give a shit. Maybe sometime we’ll visit action movie sequels that fell flat. If so, We’ll start there.
I’m Cory Carr and this concludes our ride on the “Action Movie Time Machine”. Until next time, Semper Fi!
For more from Cory, check out his website slaughterfilm.com, where he and his good friend Forest Taylor record weekly podcasts, reviewing the films that are legendary, even in Hell!