I am one of the few people who stuck with Cartoon Network’s Clone Wars series.  All the way from its lackluster backdoor film pilot to its neatly completed Netflix series ender.  If you did as well, you got to see the series actually grow and change for the better.  You got to see a character who you thought would be nothing more than a sidekick that called Anakin Skywalker annoying nicknames like “Sky Guy”, turn into probably the most compelling character of them all.  You got to see Darth Maul fleshed out…somewhat.   You got to see Obi-Wan and Anakin’s much alluded to friendship.  You got to see a good villainous become an even better anti-hero.  And yes, you unfortunately got to see more Jar-Jar.  However, The Clone Wars is easily the best thing to come out of the George Lucas prequels.  And yet, it was still missing something.  It was missing that Star Wars feel.  What is the Star Wars feel you ask?  It’s that excitement, tension and enjoyment you get from watching a rag tag group of unlikely heroes realizing their greater potential and taking on something much bigger than themselves.  That, to me, is Star Wars in  a nutshell.  David versus Goliath.  The Colonists versus The British.  The US versus the Nazis.  Pepsi versus Coke.  It’s a feeling that Guardians Of The Galaxy had.  It’s a feeling that even 2009’s Star Trek had.  But regrettably, it’s a feeling that Clone Wars and the Prequels never had.

I appreciate that both were trying to tell the story of the fall of the Republic.  However, the enjoyment and tension I had watching Han, Luke and Leia just trying to escape the Death Star or Jabba’s palace was infinitely more enjoyable and tension filled than any prequel film or Clone Wars episode where dozens of nearly invincible Jedi Knights leap into battle with the support of millions of stormtroopers behind them.   It didn’t feel like Star Wars to me.  Then thankfully the takeover happened.  Disney, on it’s eerily unpublicized quest for world domination, bought out Star Wars from Lucas.  This opened the door for a new film trilogy and a new animated series to fill in the gaps toward Episode IV.  And this animated series, Star Wars Rebels, appears to at least be trying to get that Star Wars feel back.

Taking place only a few short years after Order 66 and the new Galactic Empire wiped out the Jedi and  consumed the Galaxy, Star Wars Rebels follows a street tough kid strong in the force named Ezra Bridger.  Ezra winds up stumbling upon a group of rag tag mercenaries who appear to be mounting a rebellion to fight back against the Empire.  This set up and story is better suited for episodic Star Wars tales than Clone Wars was, I believe.  Clone Wars fell prey to the “Lesson Of The Week” motif and really didn’t have a strong overall story.  Mainly, because it was hamstrung as to where it could go since it had to tie in to the events of Revenge Of The Sith. (Agents Of S.H.I.E.L.D. had this same problem earlier in its run.)  The creation of the Rebel Alliance has never really been something fleshed out, and its growth is pretty much unrelated to Luke and Han’s meeting and journey in A New Hope.  This gives Rebels a lot more freedom in my opinion.  The other thing that gives it freedom are its characters.

I’m sorry for the continuous comparison to Clone Wars, but I think that it is an inescapable comparison which really illustrates the POSSIBILITIES Rebels has by explaining what it does differently.  With that said, Clone Wars’ main characters Obi-Wan and Anakin and possibly Padme were the weakest characters on the show in my opinion.  Where Clone Wars really thrived was its introduction of new or previously unexplored characters from Star Wars lore.  Characters like…

and Asajj Ventress(Yes, I know Genndy Tartakovski created her first, but she really grew on Clone Wars) 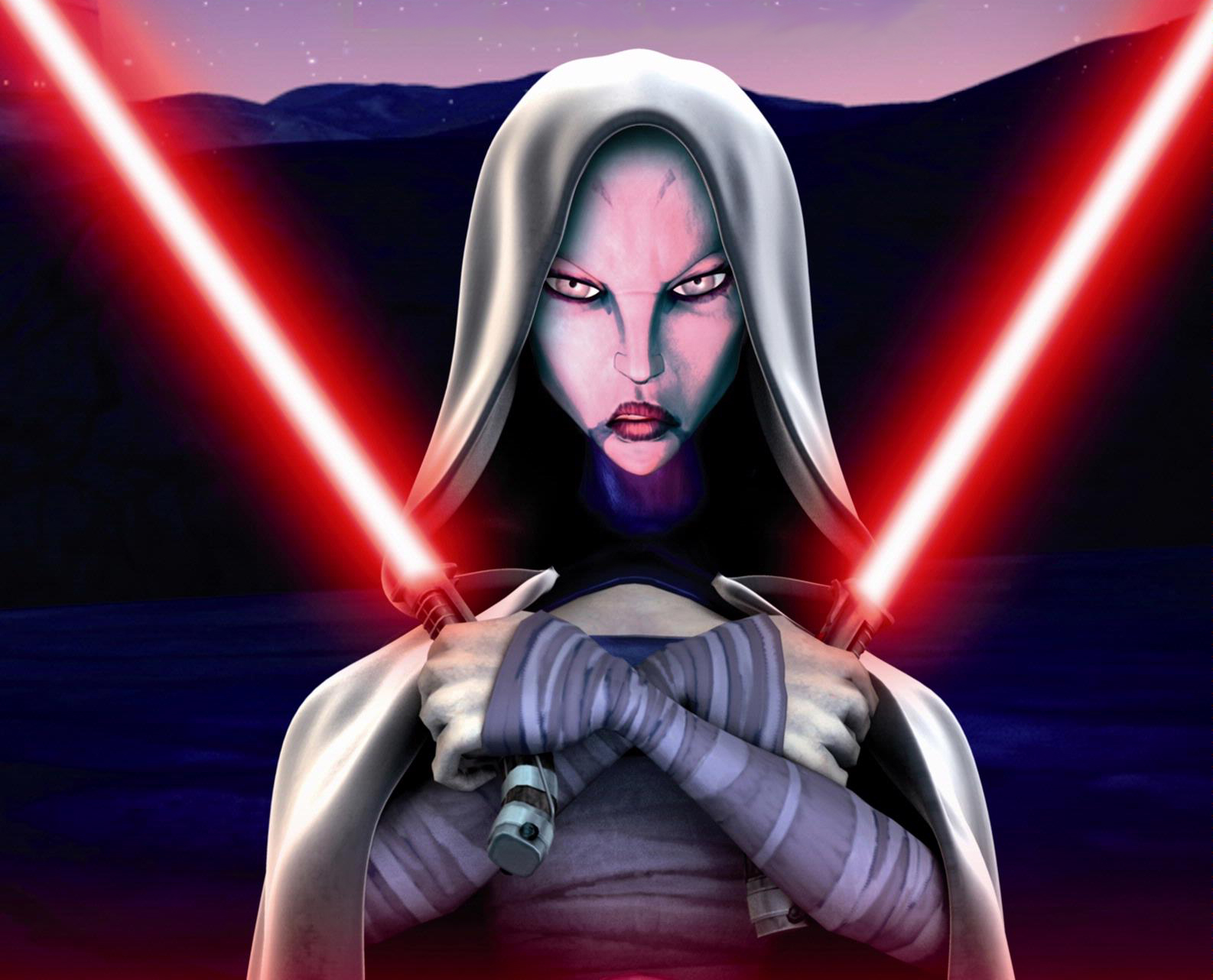 and the character with the strongest and most enjoyable character arc, Ahsoka Tano.

These new characters were free from expectations and restraints to where they could go, making them much more enjoyable than mainstays like Obi-Wan, Anakin, Padme, Palpatine, and Dooku.  Rebels gets to start from scratch as well with a slew of  new and interesting characters.  There is the female Mandalorian explosive expert/graffiti artist named Sabine. (My personal favorite)  There is the muscle and hot head of the group, Zeb, who also has the distinction of being famed artist Ralph Mcquarrie’s original visual concept for Chewbacca.  There is the Twi’lek pilot and moral center of the team named Hera.  There is the meaner R2-D2-esque droid named Chopper.  The co-lead is the aforementioned Ezra, who serves as the show’s adolescent Anakin redo.  However, the wayward Jedi Kanan Jarrus will be the main reason the team and the series makes it or breaks it.  And that’s primarily because he’s voiced by Freddie Prinze Jr.

Wait a second!!!  Just hold on!  I know Prinze Jr. isn’t a particularly popular actor or celebrity for that matter.  I mean, the guy romantically reigned in Buffy Summers.  How can you not hate him just a little?  Although, I do see what creators Simon Kinberg, Carrie Beck, and David Filoni might have been going for when they cast him as Kanan Jarrus.  Kanan has the smugness and temperament of a Kyle Katarn with the tragic history of a Quinlan Vos.  For the basic Star Wars observer who has no idea of whom I’m speaking of…let’s just say Kanan is Han Solo mashed together with a seasoned Luke Skywalker.  Playing a mouthy space scoundrel is not a hard thing for Prinze Jr. to do.  However, when he has to deliver the familiar Jedi platitudes, you can’t help but cringe a bit.  Admittedly, it is hard to make Jedi philosophies sound natural. (Unless you’re Sir Alec Guinness or Frank Oz)  I just hope Prinze Jr. can get the hang of it, as he’ll be the one advising Ezra in the ways of the Force throughout the series.

The pilot episode only gives us a taste of the two main villains, but the talent behind their voices is top notch.  David Oyelowo plays the relentless Agent Kallus.  Oyelowo, who has starred in everything from Jack Reacher to the Butler, gives the typically effeminate Galactic officers a much meaner edge.   Playing the big heavy in the series, The Inquisitor, will be the excellently evil Jason Isaacs.  The Inquisitor’s story might possibly be as interesting as Kanan’s, seeing as he is an instrument of Darth Vader himself but not necessarily a Sith Lord.

Aesthetically, the animation is a little more humanized than the blockier Clone Wars.  That visual change is good in some places but not so good in others.  You are always walking that uncanny valley tightrope with digital animation.  Though, I have no doubt that they’ll lean more toward the cartoonish side as things go along.  The action scenes were some of the best things Clone Wars got right.  The fights and battles were well choreographed, with no punches pulled.  Rebels continues this aspect with three terrific action set pieces in the pilot, and some fights previewed for later on that you’ll be dying to see.  An unfortunate hindrance to Clone Wars was its inability to use the musical score and familiar musical stingers of the legendary John Williams until the end of the series.  Rebels gets to fully use and play with those great themes now, which goes a long way to giving the series that Star Wars feel I keep harping on.

Star Wars Rebels is a welcome addition to the Star Wars universe and a series that seems to understand and want to explore its numerous POSSIBILITIES.  How did the Rebel Alliance grow?  How did Leia get caught up with them?  How did Mara Jade become the Emperor’s Hand?  What was Obi-Wan doing all that time on Tatooine?  Why is Lando now the only black guy in space?  Sorry, that one’s just for me.  Open up your holocrons…fasten your lightsabers…put on your Mandalorian helmet…watch it…then tell me I’m wrong.