Well, well, well we meet again. I take it that two Jean-Claude Van Dammes wasn’t too much for you. After all he does happen to speak with an accent…if you haven’t noticed. This can be confusing for some… apparently. All aboard the Action Movie Time Machine!
The year is 1992. Yeah, we’re back in the early 90s… again. Not much has changed since that last time we visited. TWA declares bankruptcy. Mike Tyson plays his own game of Punch-Out with a woman he is convicted of raping, and there were plenty of toy related movies to watch. Ironically enough, both “Toys” starring Robin Williams is released as well as the direct to video “Demonic Toys”, for those of you who thought “Toys“ wasn‘t creepy enough. All this and Jackie Chan discovers that he has a long lost twin brother in “Twin Dragons“.
THE SKINNY
The film begins in black and white during the mid-60s. A woman has just given birth to a pair of beautiful baby boys. Meanwhile, police are wheeling in a wounded man who made an attempt to escape capture. However, this man still has some fight left in him. He regains consciousness, swipes a cops gun and starts to shoot his way out of the hospital. He is cut off from the exit and makes his way to the very same room the mother is in with her sons. Using one of the boys as a human shield, he leaps through a window and makes his escape. The human shield is soon discarded and later discovered by a drunken slut.
Now modern day, we learn that one brother, John, has been raised by his loving parents and at a young age became a piano prodigy. As an adult John is a world renowned conductor. On the other side of the coin we have Boomer, who practically raised himself and is now a hard fucking, shit talking stock car racer/mechanic. 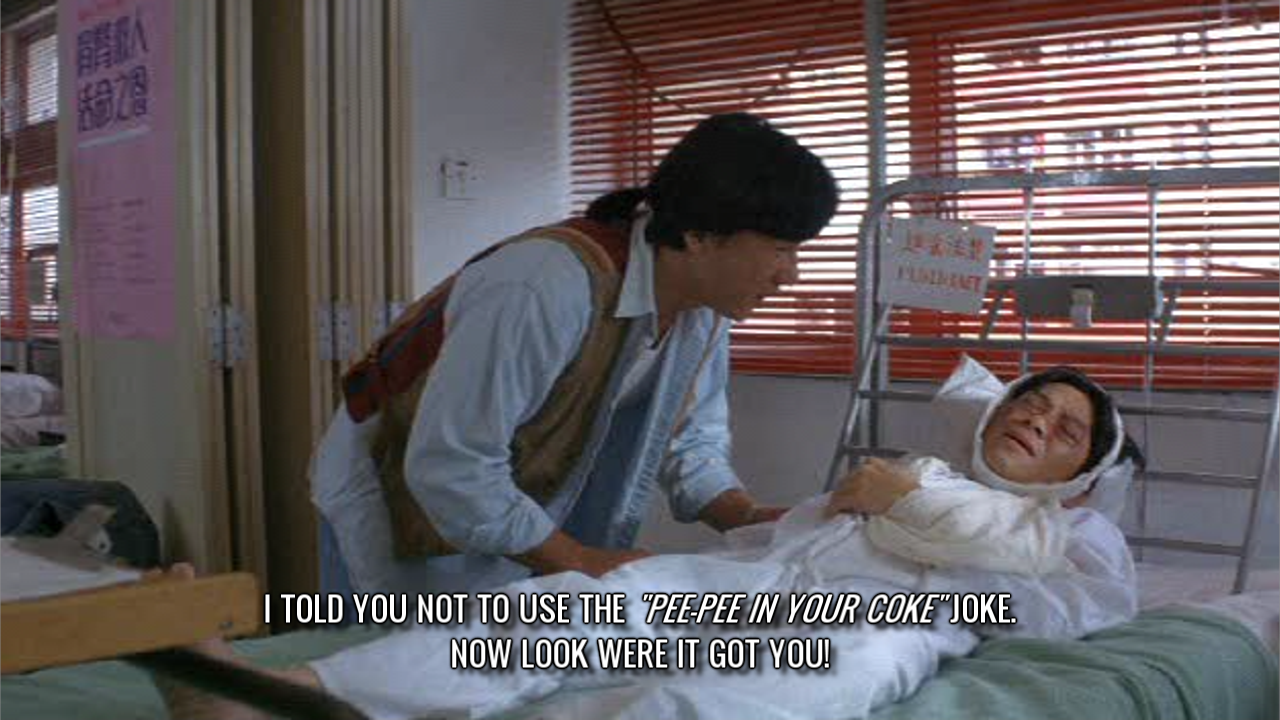 This story gets interesting when we see John travel to Hong Kong for a piano concert, and during this concert, Boomer, who happens to be repairing a car, suddenly can’t control the movements of his fingers. The twins are somehow psychically connected when they are near each other.
Soon we see Boomer and his friend Tyson, another racer, making their escape. As it turns out the duo owe a local mob boss a considerable amount of money. Boomer and Tyson hustled them into a race, thinking they could win…they didn’t. Now the mob wants them to pay up.
A boat chase ensues that lands Tyson in a body cast. The hospital Tyson is staying in happens to pay protection money to the mob, so for the time being he belongs to the mob and is their prisoner. To guarantee Tyson’s safety, Boomer gets roped into taking care of the mob’s dirty work. Driving mostly. In fact there is a plot to sprint another, higher ranking mob boss. 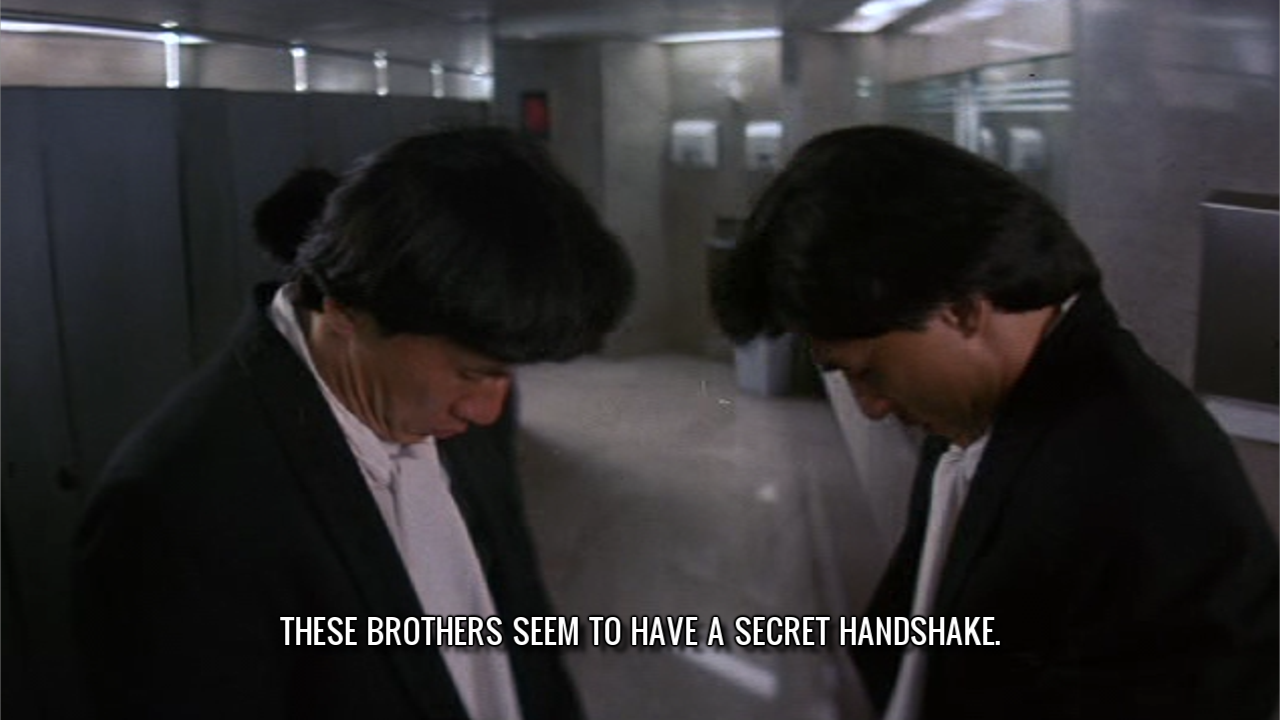 This gets complicated when John arrives in Hong Kong to conduct a concert. Soon the two are thrust into a constantly evolving case of mistaken identity that involves the mob, an angry Iron Maiden fan, kung-fu conducting and the love interests of both men which results in fast paced slapstick fight scenes. At one point, both brothers share a bath with one of the women — one brother pretending to be a mirror so they don’t get found out like it was some sort of Marx Brothers gag.
As far as their love interests are concerned, each brother has a female acquaintance who the other brother falls for. This is an obvious set up for hijinx that will later result in some sticky situations, a romantic ending and even an opportunity for them to be taken hostage. The later never happens. I guess the mob figures that Tyson is good enough. 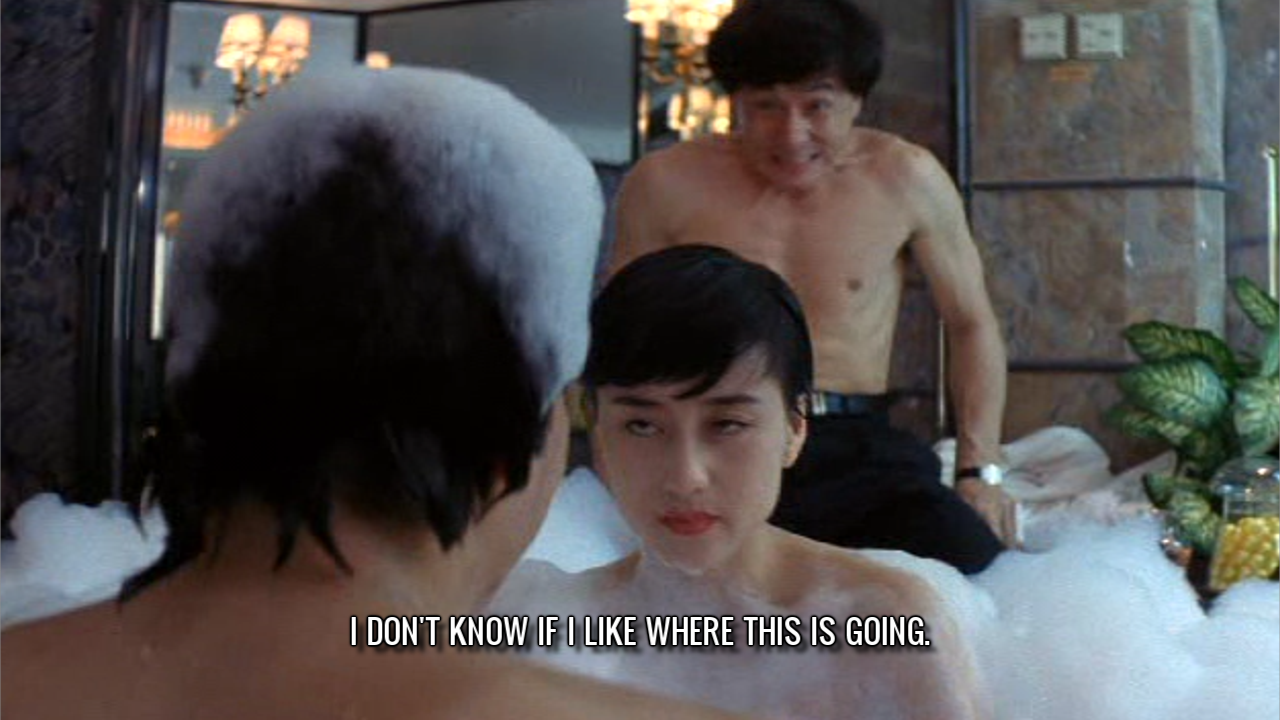 Anyhow, once John and Boomer have understood that they are twins, they decide that they are in this together and hatch a plan to rescue Tyson.
The brothers head to the mob’s hideout near the docks. The next twenty minutes of the film are one big fight sequence that moves form the docks and into a Mitsubishi car factory. First the showroom, then the crash test area and later the assembly line.
For a brief time Boomer is trapped in some sort of cage and John, a man who know music not fighting, must defend himself. With his wonder twin powers, Boomer throws punches and kicks that force John’s arms and legs to move. Boomer controls his brother this way. Lol He moves him like a puppet and ends up saving his life. 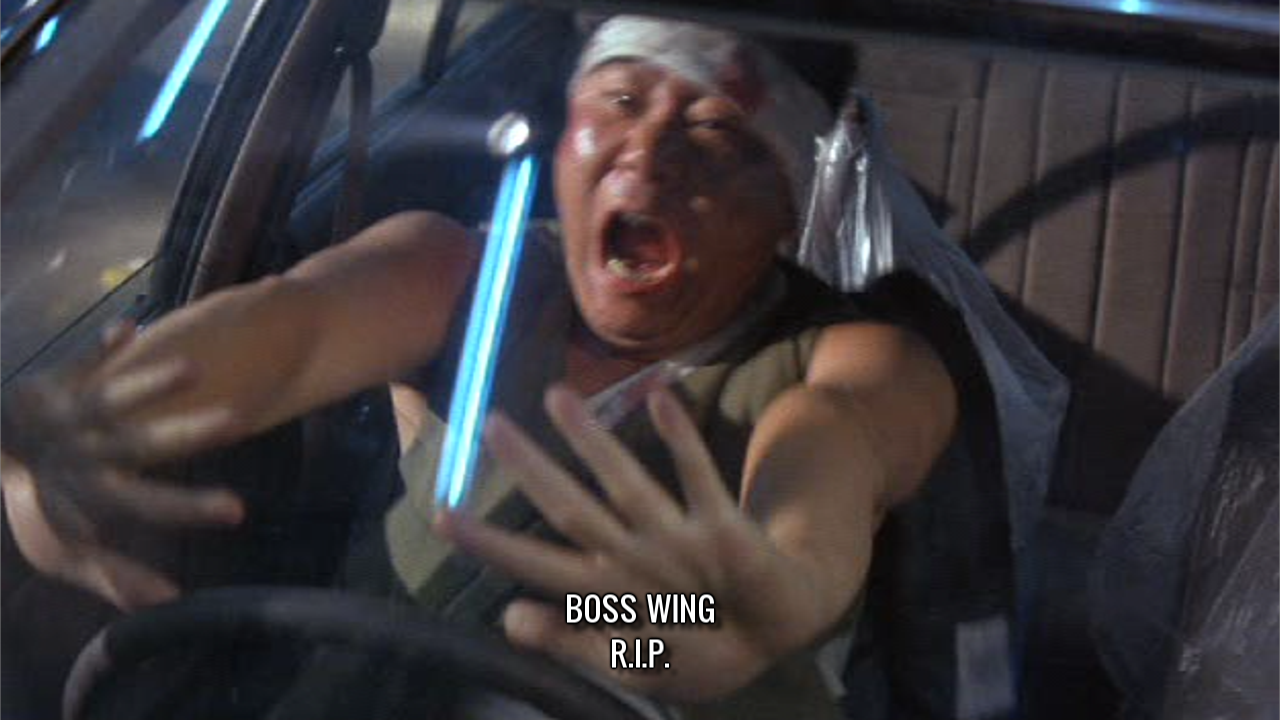 The brothers rescue Tyson and send the mob boss, Boss Wind, rocketing into a wall inside one of the crash test cars.
The film ends with the two brothers marrying their women in a twin wedding. I told you there would be romance in the end.
THE VERDICT
Much like “Double Impact“, this action film stands out from others because it features twin brothers. Unlike “Double Impact”, this film features the fast paced and often humorous fight choreography that is often found in Jackie Chan films. “Twin Dragons” also tries to build upon the supposed supernatural connection that twins are said to possess. If you hadn’t thought of it yet yourself, “Twin Dragons” has a lot like in common with Cheech & Chong’s “Corsican Brothers”. Of course in that film each brother feels the physical pain of the other and in this film the brother’s physical movements are caused by the other when they are in close quarters.
While the action in this film is pretty good, my only complaints focus on the plot and how it unfolds. I feel that too much of the film focuses on the humorous hijinx the brothers experience during their travels, which is entertaining, but this makes the story seem watered down and even vacant in parts. The mob boss doesn’t even have a clear criminal plot. They have Tyson as a hostage and that’s about it. I wish there was a plot mechanism that forced both brothers to work together to fight the mob. Instead they decide to work together because… they look alike? Maybe because they are together each time the mob assigns them to the next task, i.e. deliver a brief case, drive a getaway car, ect…
The thing that’s strange about this “separated at birth” story is that the two brothers never discover that they are brothers. Not until the very end anyhow. This whole movie they  think it’s strange that they are doppelgangers and even say that they would make good brothers.
I think some of this poor story telling has to do with the English dub. While it sounds good and doesn’t come off as odd as many dubs do. I feel like something has been lost in translation. The character names for instance are John, Boomer and Tyson, but according to IMDB the original names were Ma Yau, Die Hard and Tarzan. Weird and wild stuff. 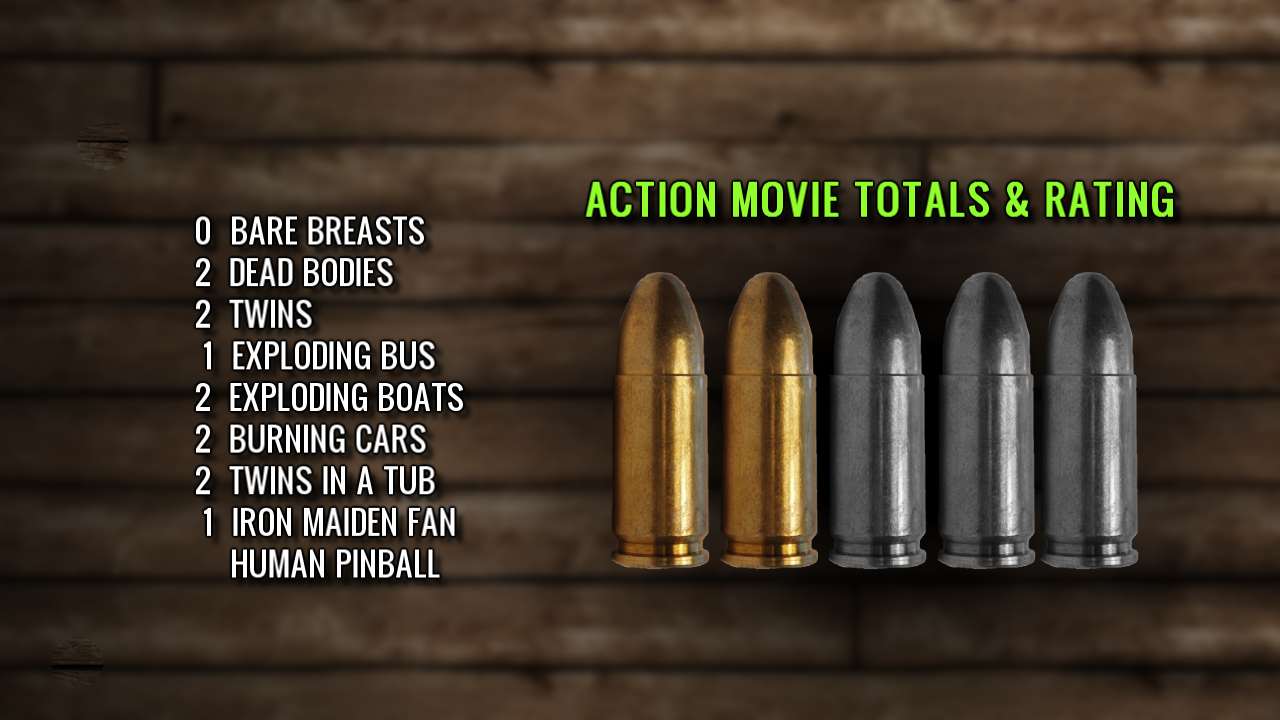 In the end “Twin Dragons” isn’t the best twin related action movie. It isn’t even that great of a regular action movie as it feels more like a comedy. But it will hold your attention and might be worth checking out if you are a fan of Jackie Chan.
I’m Cory Carr and this concludes our ride on the “Action Movie Time Machine”. Until next time, Semper Fi!
For more from Cory, check out his website slaughterfilm.com, where he and his good friend Forest Taylor record weekly podcasts, reviewing the films that are legendary, even in Hell!

Yet Another 31 Nights of Halloween: Halloween (1978) Redux