One of the oldest, and most cliched tropes in horror are zombies. Zombies, zombies, and zombies. You simply can’t get away from zombies. Well, to be fair, vampires took the lead a little bit, but with “The Walking Dead” and numerous video games, you can’t get away from zombies. But, there was a time when zombies were cool, not running jokes (double pun). This brings me to the 1985 cult classic from Stuart Gordon, “Re-Animator.” While it’s not a zombie movie per say, maybe more of a modern day take on Frankenstein, there is still plenty of zombie-like behavior throughout the film.

Our tale starts at the University of Zurich, where Dr. Herbert West is found with his “dead” professor, Hans Gruber, and after the incident, West flees the University to come to Miskatonic University in Massachusetts to continue his studies. He meets Dan Cain after answering an ad for a room to rent in Cain’s home. Dan is engaged to be married to the Dean of the University’s daughter, Megan, which is being kept a secret.

After an altercation with the University’s head brain researcher, Dr. Carl Hill, West continues his research and brings Dan’s dead cat, Rufus, back to life. While Dan is horrified, he is also intrigued by West’s research and helps him sneak into the University’s morgue to continue testing his “reagent” on fresh corpses. This is met with mixed results as the test corpse is re-animted, but uncontrollably, killing Megan’s father, Alan Halsey. West, after dispatching his creation, seizes the opportunity with an even fresher corpse, and injects Alan with his reagent. While not a wild as the previous experiment, Alan is merely a zombie of his former self.

After contacting the authorities, Dr. Hill remands Halsey in his private padded room and lobotomizes him with his latest creation, a laser knife, to make him more docile. Hill goes to visit West after the procedure and plans to blackmail him if West does not turn over his research for his serum. Distracting Hill, West is able to dispatch the doctor with a shovel, removing his head from his body. Sensing a breakthrough with an even fresher specimen, West injects Hill’s head and body with his serum, resurrecting both. However, while not paying attention, Hill’s body knocks out West, stealing his notes, research, and serum, and returns to the morgue at Miskatonic’s Hospital to begin his own research with the reagent.

Meanwhile, Dan and Megan find West in his research basement, discovering that all of his research has been stolen, but before they can react, Megan’s father, Alan, attacks, knocking out Dan and taking Megan back to Hill. Needless to say, Hill’s plan is to use his laser knife and West’s serum to resurrect the dead and lobotomize them to create an undead army under his command and it’s up to West and Cain to stop him and save Megan.

“Re-Animator” is a classic in the splatter/body horror genre, and I could only imagine what it would have looked like if it was directed by David Cronenberg, even though Stuart Gordon does an admirable job directing. The film takes classic tropes of zombies, Frankenstein, and other elements of the horror genre, and marries it in a perfectly cheesy 80s way. While the plot is ridiculous, and some of the gore effects over-the-top, that doesn’t take away from the truly sleazy masterpiece this film is.

Now let’s get down to it, “Re-Animator” is what it is today with the help of one key set-piece; it’s the ironically hilarious, albeit extremely exploitative, “head” scene. Upon seeing this scene again, and remember it from when I first saw this film, while the scene is graphic, there really isn’t much there. This scene has popped up on so many lists of the most memorable horror scene, or sickest scenes in cinema, but it’s more the insinuation than anything and the way the shot is composed is simply a sick pun (head giving head). I’m sure some people see this as misogynistic, sick, twisted, and plain gross, but you could get away with stuff like this in the 1980s. 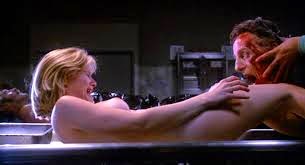 There are also a few nice odes in the film as well, including the opening title score, performed by Richard Band, which is an obvious ode to Bernard Herrmann’s “Psycho” theme. And the Talking Heads poster that is above Daniel’s bed, which would allude to Dr. Hill’s “talking head” later in the film. While not the most subtle or ingenious ode, it’s still very fun to see.

All in all, “Re-Animator” is still a lot of a fun, and holds up very well nearly 30 years later. The gore effects and the animatronics rival anything practical being done today, if you can still find reasonable effective practical gore, and it’s just cheesy and exploitative enough to be a lot of fun. Also, unlike other Lovecraft fare, this story is actually reasonably easy to follow. Most of his Cthulhu Mythos can get a little confusing and in depth, but “Re-Animator” is an easy to follow story about a man trying to play God, and wrestle with naked corpses.

Rant Corner (Ep.1) – “Gotham” or: How I Learned to Stop Caring for anything on TV and Developed a Drinking Problem.