Well I hope you enjoyed last weeks look at real life spy stuff which concluded our “Double Vision“ series. And believe me, those weren‘t the only or the strangest action movies featuring doppelgangers. At least “Double Trouble” had actual twins. Not like that 1988 flick starring Arnold Schwarzenegger and Danny DeVito. Speaking of which, I hear there will be a “Twins 2” in the not too distant future… so… there’s that.
This week we shall be doing something out of the ordinary. We will be traveling through both time AND space to explore the alternate timelines of humanity. Timelines that haven’t been as fortunate as ours. All aboard the “Action Movie Time Machine”. I have locked onto the time stream of “Warlords of the 21stCentury”, aka “Battletruck“.
The year is 1982. A wave of terrorist attacks are committed in France by Carlos the Jackal [see The Assignment], Michael Jackson Moonwalks into children’s hearts with “Thriller” and “E.T.” & “Tootsie” battle it out to be the top grossing film of the year.
THE SYNOPSIS
Our film begins in 1994, “the near future”, after the fallout of what is called the Oil Wars or World War III. The “Battletruck”, a futuristic armored personnel carrier/semi thing,
is barreling down some forgotten country road in middle America, even though it was filmed in New Zealand, when it comes upon a horse drawn pickup truck with two men transporting fifty gallon drums of diesel. The Battletruck runs the pickup off the road before Straker and his soldiers file out and begin interrogating the men, asking them were they found the diesel. Much like the “Mad Max” films, gasoline is rare and is often fought over. 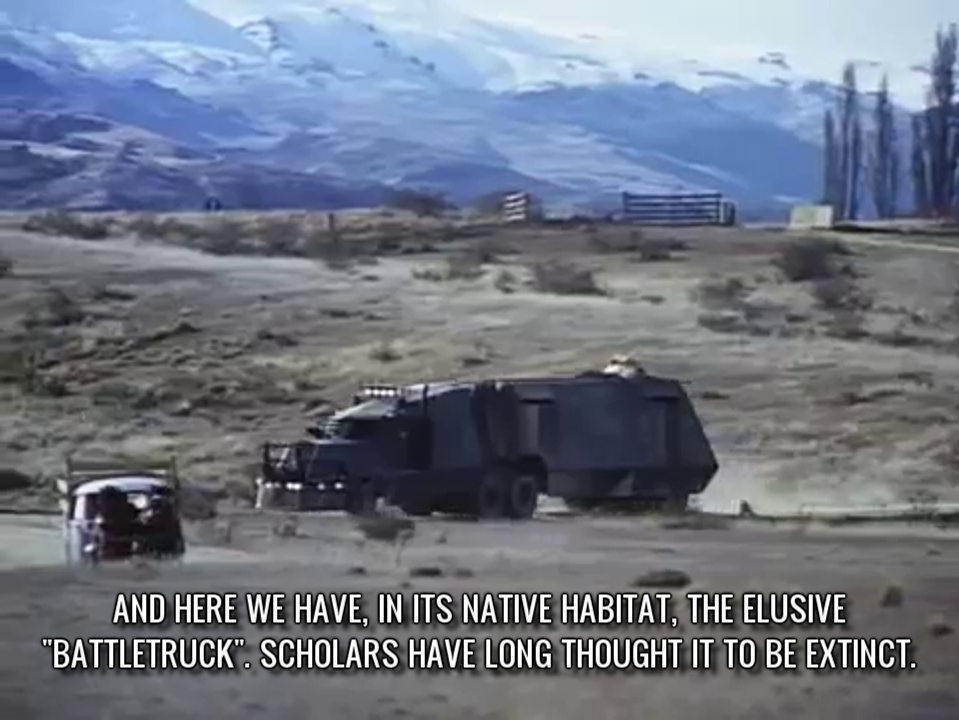 Straker kills one of the men outright to teach the other a lesson, and with the lesson learned he agrees to show them where the gas is located. As they travel, the nameless man explains that his father was in the military and as a child he learned where there was a secret military refueling station and that station is where he and his friend retrieved the diesel. Once they arrive, Straker kills the nameless man and has his men begin fortifying the military encampment.

Corlie, a young and attractive captive of Straker, makes a break for it during the night. But come morning Straker’s men have tracked her and are closing in. Never fear, Hunter is near! Hunter, Michael Beck from “The Warriors”, comes to the rescue and on a steel horse he rides. He pulls his motorcycle around and picks up Corlie just in time to escape Straker’s men. Seeing that she has been injured, Hunter takes the young lady to a village called Clearwater, where she is brought into the fold and put to work in the orchards 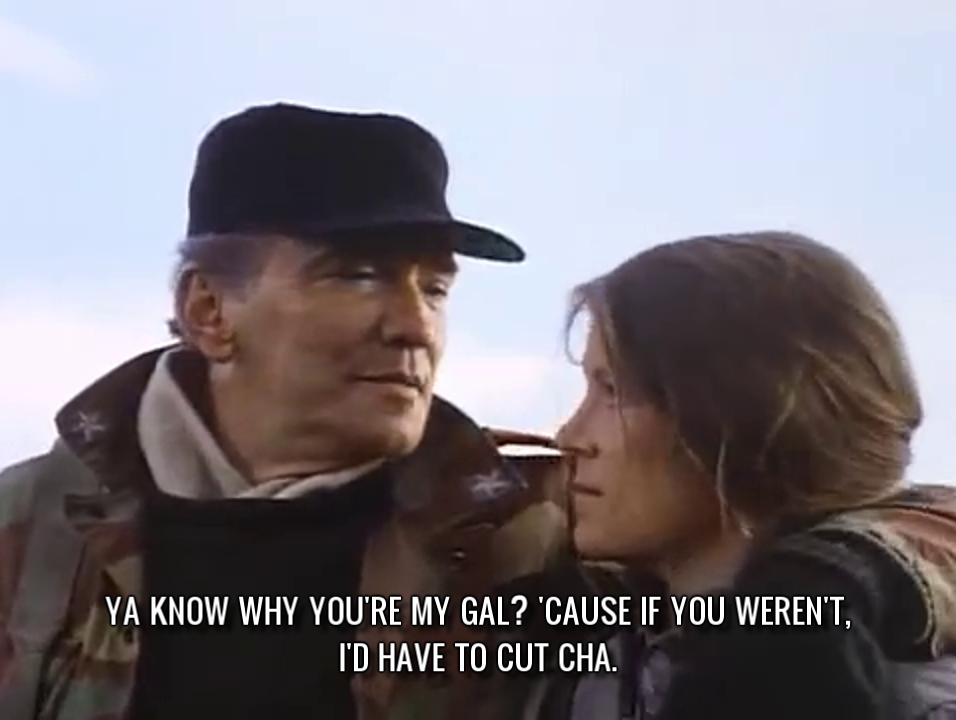 Meanwhile, Straker has regrouped with his men and has followed in the direction where Hunter was last seen, which also happens to be in the direction of Clearwater. Once in Clearwater, Straker kills those who resist, strips the men of their weapons, loots the villagers possessions and conscripts them all into his fighting force. For a long time now Straker has been traveling and looting, while growing his numbers by force. As Straker barks orders, Corlie quietly escapes the village by horse and seeks out her moto-protector Hunter. 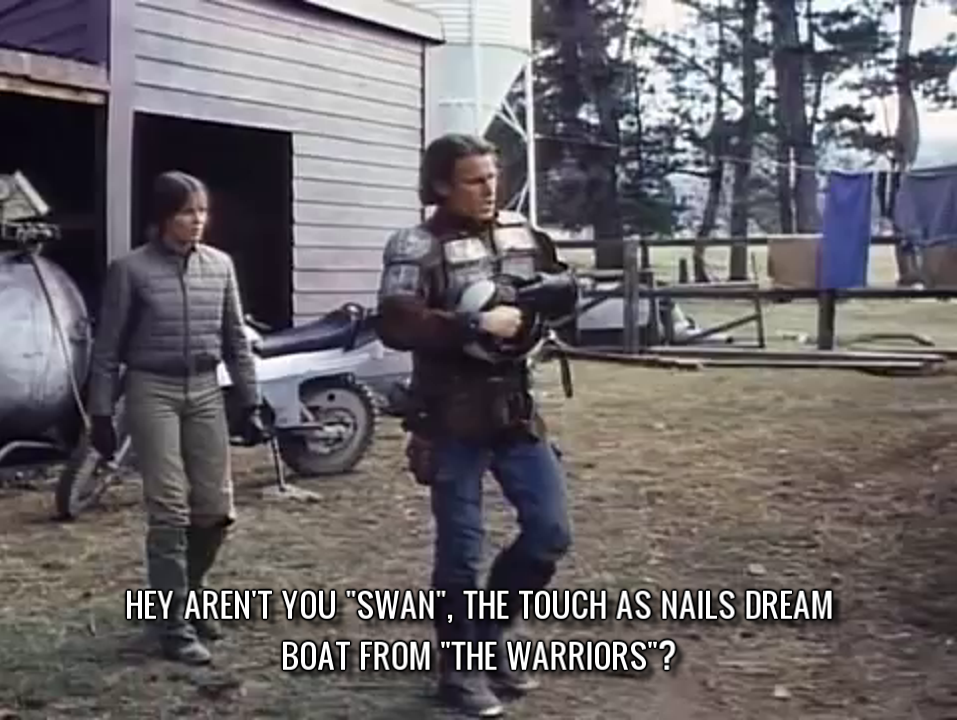 Again Straker engages in hot pursuit and arrives at Hunter’s farm house just as the lovemaking of Hunter and Corlie comes to an end — I bet you didn‘t see that coming. Straker and his men attack but Hunter and his bitty manage to escape. A lengthy motor chase ensues through the “American” forests before Straker and company give up and return to his military diesel base camp.
Back at Clearwater one of the villagers has a change of heart and captures Corlie himself to give to Straker as a peace offering. Hunter knows that he is now the only one who can save the village as well as Corlie from the evil grip of Straker.
With the help of the villagers, one of which is John Ratzenberger from “Cheers”, Hunter builds some armored rat buggy over night which he uses to attack and destroy the diesel depot. AGAIN, a chase ensues with Hunter racing to the second stage of his plan with Straker following in the Battletruck. I know I’m not the only one who thinks “Battletruck” is a stupid name for anything right? 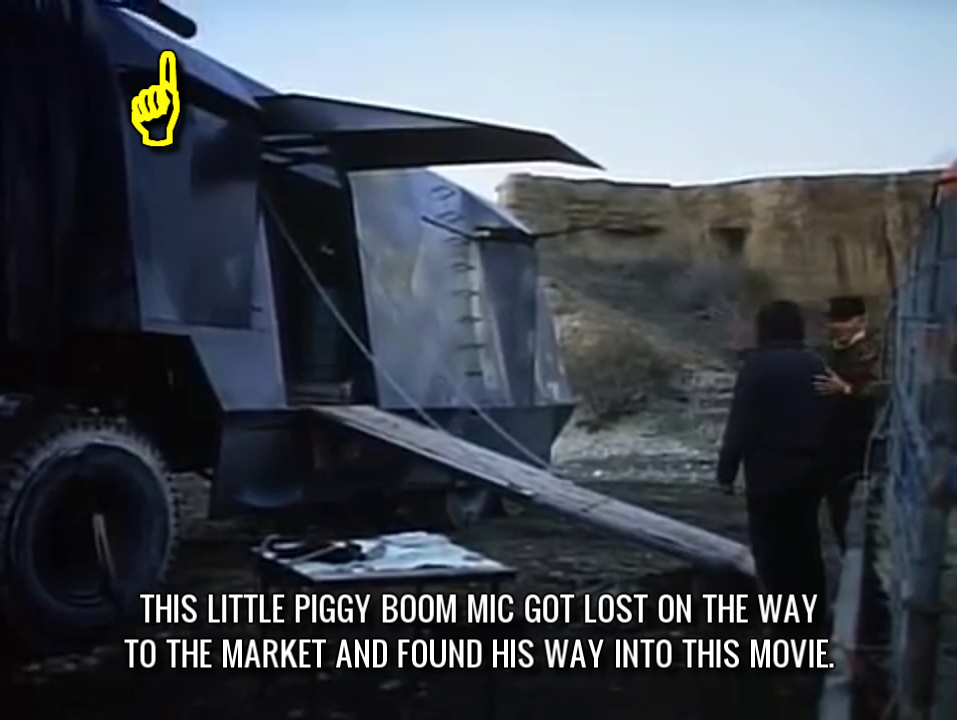 Hunter hops onto his motorcycle, loops around behind the Battletruck and with a homemade rocket launcher, blows a hole in the side of the Battletruck. Hunter then climbs into the gaping hole, fights Straker and his men one by one before escaping with Corlie. The now unmanned Battletruck careens off a cliff and explodes into a fiery wreck when it hits bottom. 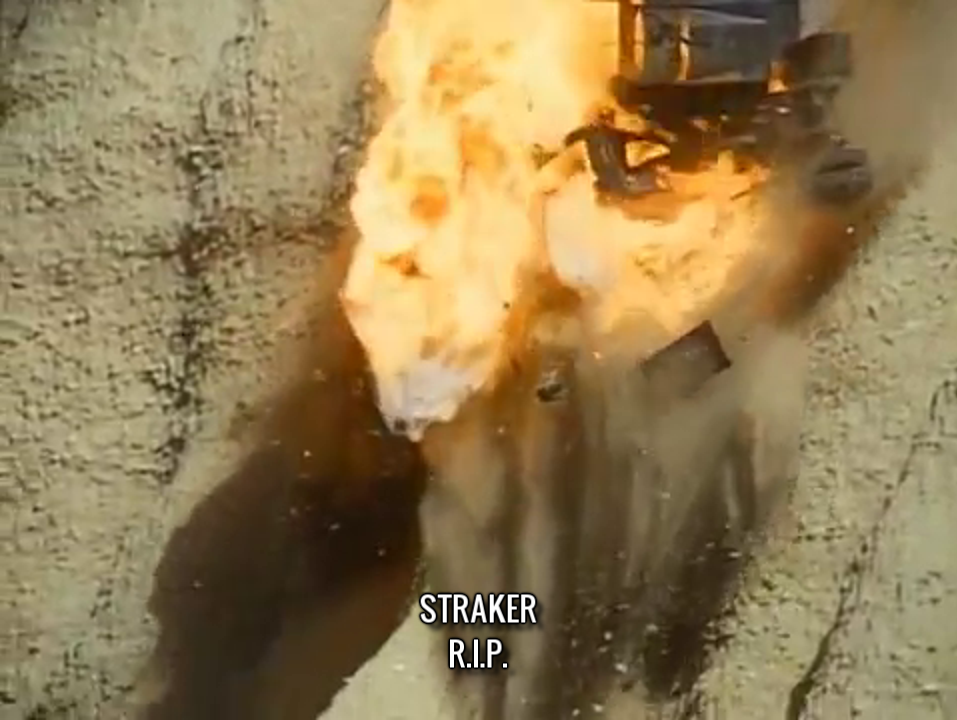 The film ends with the people of Clearwater rebuilding their village and Hunter riding off into the sunset. The End.
THE VERDICT
So, “Warlords of the 21st Century” isn’t exactly bad. It has an evil bad guy, a heroic loner and a damsel in distress, which are all set in a post World War III apocalypse. It follows the traditional three act story. The acting isn’t great, but again it isn’t exactly bad and the film doesn’t rely heavily on special effects that would otherwise look cheep due to the films low budget.
Ya see, all that stuff I just mentioned is fine and well, but none of it makes this movie anything more than derivative and textbook. Not only is this film inspired by, influenced by or just a plain rip-off of “Mad Max”, and to some degree “Escape From New York”, it also spiritually rips off countless fantasy pictures. If it weren’t for all the cars and modern weapons “Warlords of the 21stCentury” could have easily taken place in the ancient past and been about a man trying to save a village from marauders and rescue the princess from an evil sorcerer. Whether it takes place in the future or in the past, this story is one that has been told in hundreds of films, and honestly, manages to keep from standing out against any of them.
“Warlords of the 21st Century” isn’t the only one. Allow me to illustrate how unoriginal many of these post apocalyptic films are by sharing descriptions of similar films found on IMDB;
Robot Holocaust
A highly unlikely band of heroes traverses a post-apocalyptic wasteland to rescue a scientist from the tyrannical Dark One and his army of robots.
The Book of Eli
A post-apocalyptic tale, in which a lone man fights his way across America in order to protect a sacred book that holds the secrets to saving humankind.
Steel Dawn
In a post-apocalyptic world, a warrior wandering through the desert comes upon a group of settlers who are being menaced by a murderous gang that is after the water they control.
Cyborg
A hired fighter living in a plague-ravaged apocalyptic America sets out to rescue a young girl from a murderous gang called the “Pirates”, and exact his revenge against their leader who killed his family.
What do they all have in common? A lone survivor, or small group of survivors, defends a village or small community from marauders before venturing out to save the princess, scientist, book or water. If you’ve seen one, you’ve seen ‘em all, even if it has robots or a plague.
I never quite figured out why Straker was so interested in Corlie. I guess he was in love with her or something. I kept waiting for there to be a reveal that she was the daughter of the President — captured as a trophy during the Oil Wars or something. But no. Just a pretty girl and nothing more. 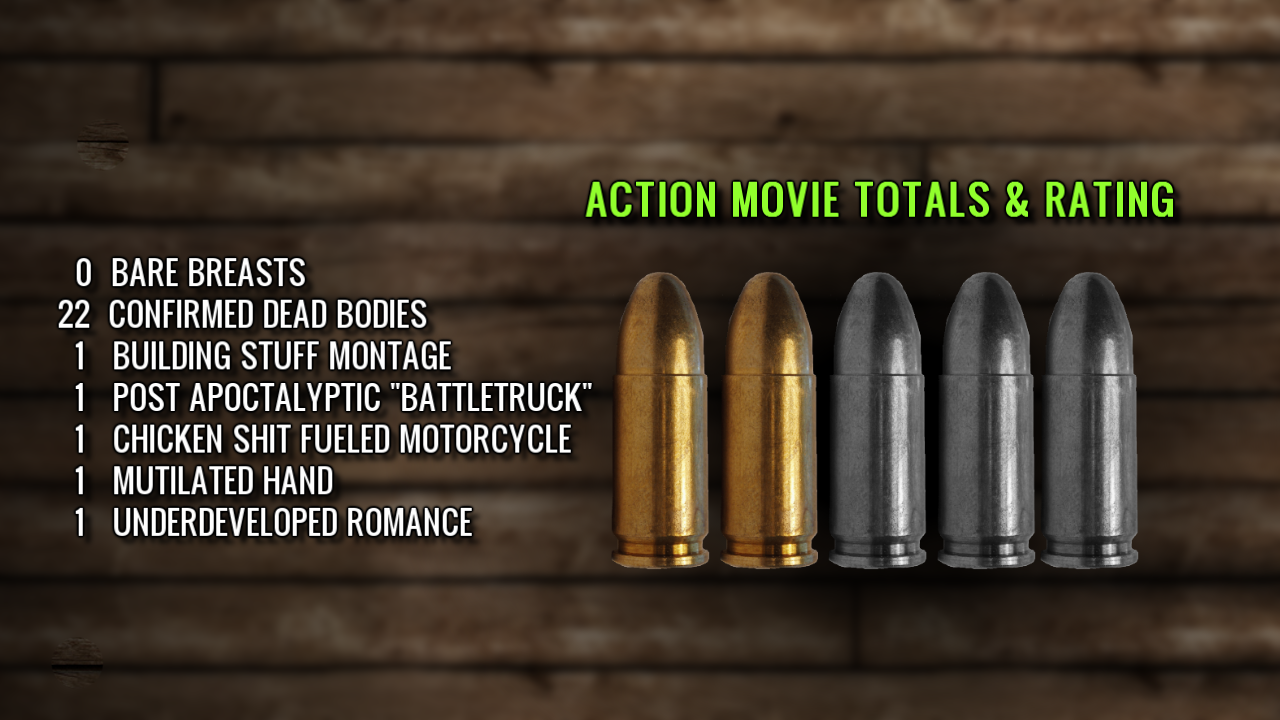 “Warlords of the 21st Century” isn’t original, and because of that, it isn’t worth viewing unless you’re a sucker for this sort of low rent fare. Again, it isn’t exactly bad. But you will be able to predict what is about to happen next, every step of the way.
I’m Cory Carr and this concludes our trip on the “Action Movie Time Machine”. Until next time, Semper Fi!
For more from Cory, check out his website slaughterfilm.com, where he and his good friend Forest Taylor record weekly podcasts, reviewing the films that are legendary, even in Hell!

Yet Another 31 Nights of Halloween: American Horror Story: Freak Show