Lace up your Chuck Taylors and throw on a flannel shirt, we’re taking a trip to the ’90s. A ’90s of a PARALLEL TIME!
The year is 1982. Both funny man John Belushi and guitar shredder Randy Rhoads pass away.  Rocker Wendy O Williams sues several Milwaukee police for physical abuse endured while she arrested. “Ghandi” and “Conan the Barbarian” share the silver screen – now that’s a fight I’d like to see. And the compact disc is debut.
All aboard! The “Action Movie Time Machine” is dialed into the time stream of “1990: The Bronx Warriors”, a film that predicts the post apocalyptic world of New York City in 1990.
THE SKINNY
The film is set in the post apocalyptic New York City of 1990. The Bronx, where our story unfolds, is controlled by several vicious gangs who patrol their territories and coordinate their Technicolor outfits for maximum bad-ass-itude. The gang related crime has become so great that all attempts to restore law and order have been unsuccessful, and the Bronx is now regarded a “no man’s land” by the authorities. All of this we learn from the films “Escape from New York” style prologue. 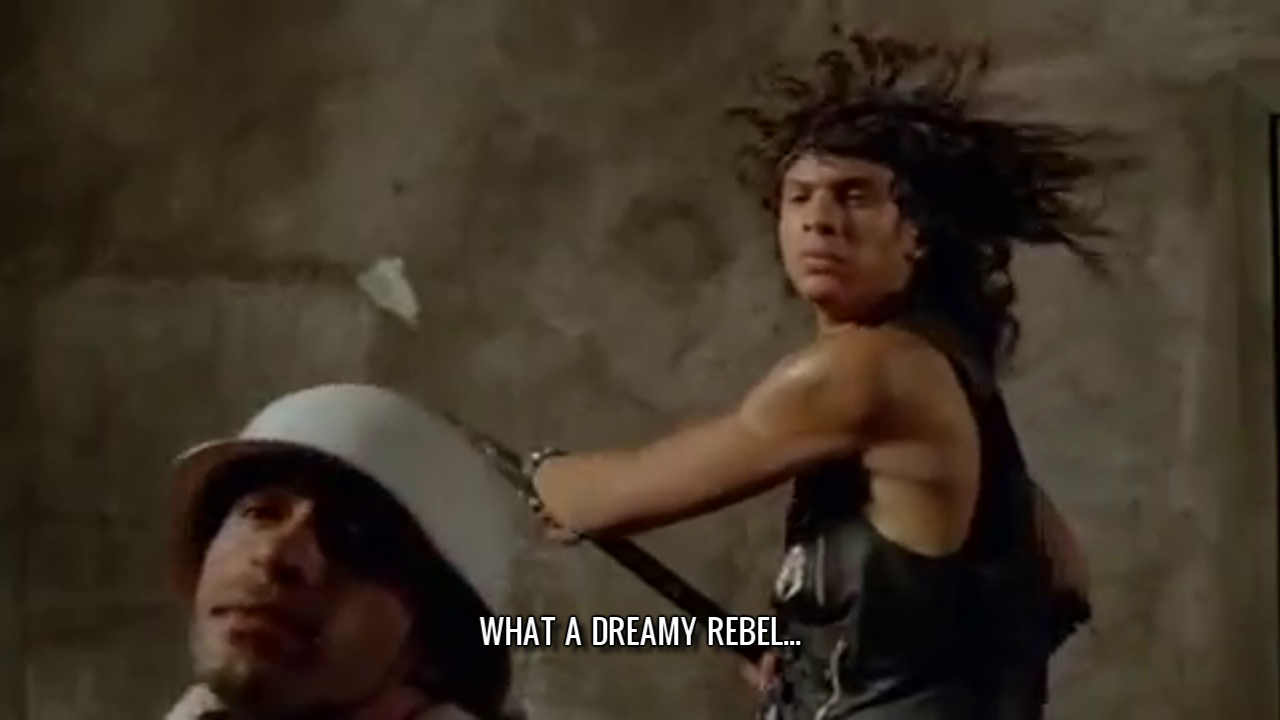 The film begins with seventeen year old Ann, who has runaway from her Manhattan Catholic school and found her way into the Bronx. Soon she is discovered and attacked by one of the many colorful gangs following in the footsteps of such films as “The Warriors”. Her attackers are the Zombies. A gang who’s mode of transportation is roller skates. Their weapons are white hockey sticks and they wear matching white Stahlhelme (Nazi helmets). Soon Ann’s attackers are confronted by a rival gang,  the Riders, who are nothing more than a biker gang. the Riders dish out a bit of the ol’ ultra violence to the Zombies and Trash, The Rider’s leader, takes Ann as his biker bride. Ann doesn’t seem to mind. She and Trash hit it off and spend the following days making underage love. 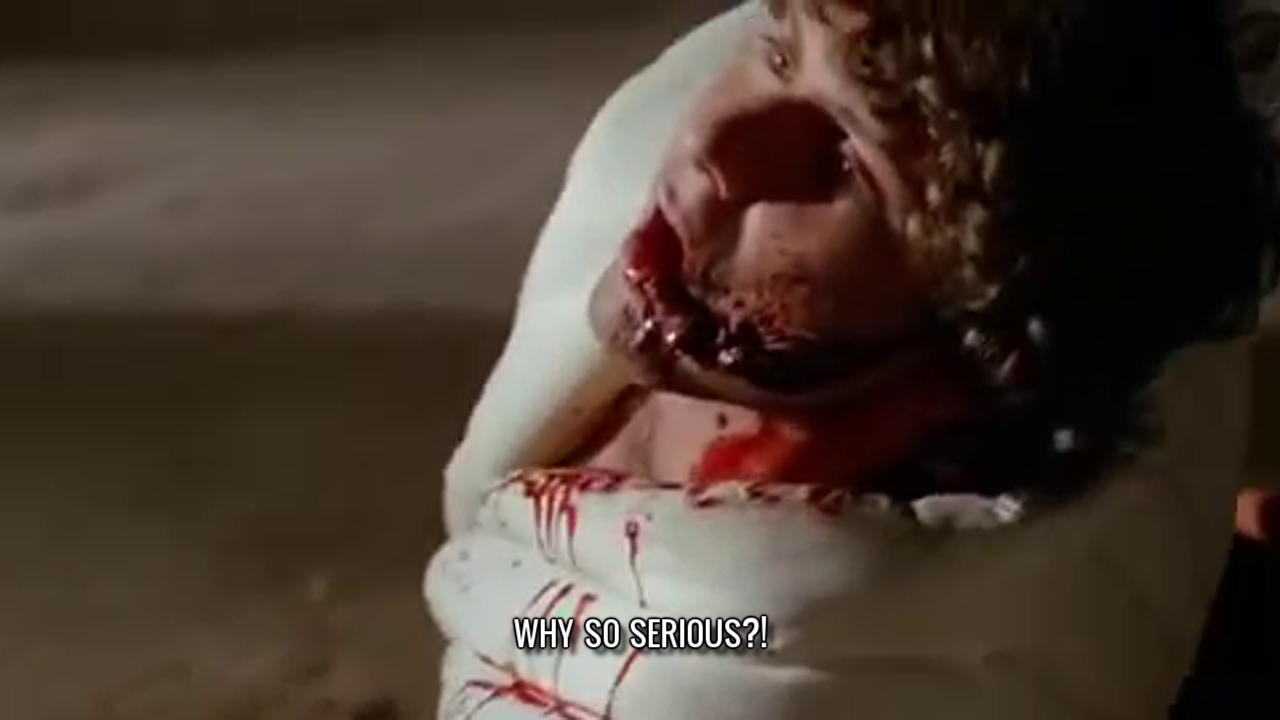 Ann has escaped a world of privilege and power to live in… the Bronx. She could have used her family’s money and influence to go anywhere in the world, but she chose the Bronx. The gang infested – ghetto-ass Bronx. Why you ask? Well she is running from responsibility. Once she turns eighteen she will inherit the family business, The Manhattan Corporation, which is the largest single company in the United States. In short she doesn’t want her life devoted to the  board meetings and conference calls of a god sized entity that influences the decisions of first world countries and owning those of the second and third. Instead… she chooses the Bronx. That’ll show that stuffy old board of directors.
In order to get Ann away from danger and back into Catholic school, the vice-president of the company sends in a private contractor, a man who goes by the name Hammer, to infiltrate the Bronx, track and retrieve Ann. The Riders learn about Hammer when he gets a little too close to the gang while doing some recon. He happens upon a member of the Riders and his lady getting’ busy in a stairwell of an abandoned apartment building. Hammer shoots them both point blank in the chest with a shotgun. The noise alerts Trash and the rest who search the building and chase Hammer but can’t catch him.
Around this time another of the Riders turns up dead. This time at the hands of the gang known as the Tigers – a gang of well dressed pimps. He was found trespassing on Tiger territory, so The Ogre, leader of the Tigers played by Fred “The Hammer” Williamson, removes his heart as a punishment. In the process, The Ogre discovers that he was wearing a “gizmo” (a police issue tracking device). This news gets back to the Riders and causes them to quarrel among themselves. Some think it’s all a lie and The Ogre is moving in on their territory. However, Trash has had a long conversation with Ann, who believes all these killings are connected and are the doing of the Manhattan Corporation. Trash devises a plan to  take his best men, travel through the other territories and meet with The Ogre. With The Ogre on his side, the gangs could team up and smoke out Hammer and whoever else has ties to the Manhattan Corporation. 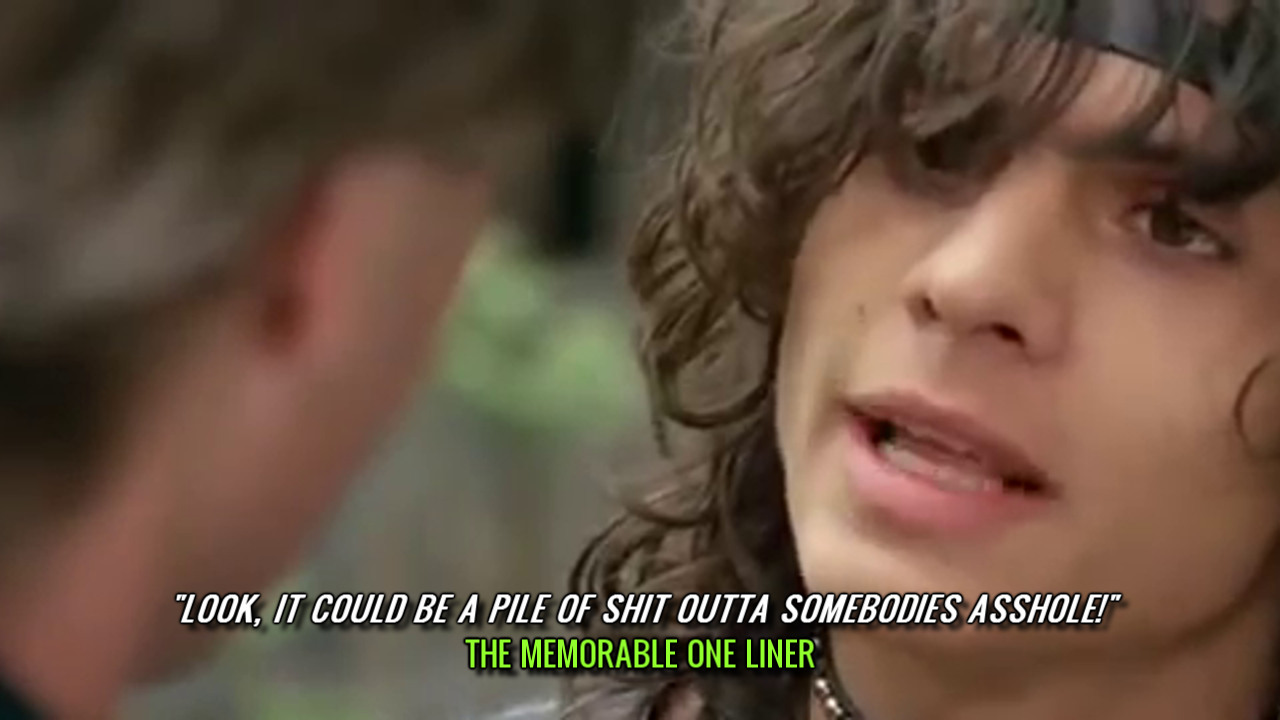 Along the way, Trash and his men encounter several other gangs who they must defeat. First the Iron Men – a gang of face painted, tap dancing theater types, then the Scavengers – a nomadic group or club wielding barbarians and finally the Tigers who they have to fight their way thou before they earn an audience with The Ogre. When they do, The Ogre and the Tigers are on board.
Meanwhile, Ice, one of the Riders, has been making a power play to lead the gang. He has made a deal with Hammer – telling him Trash’s plan to team up with The Ogre. Ice then meets with the leader of the Zombies, who’ve captured Ann, and convinces them to use Ann as bate to draw in Trash and eliminate him for good. 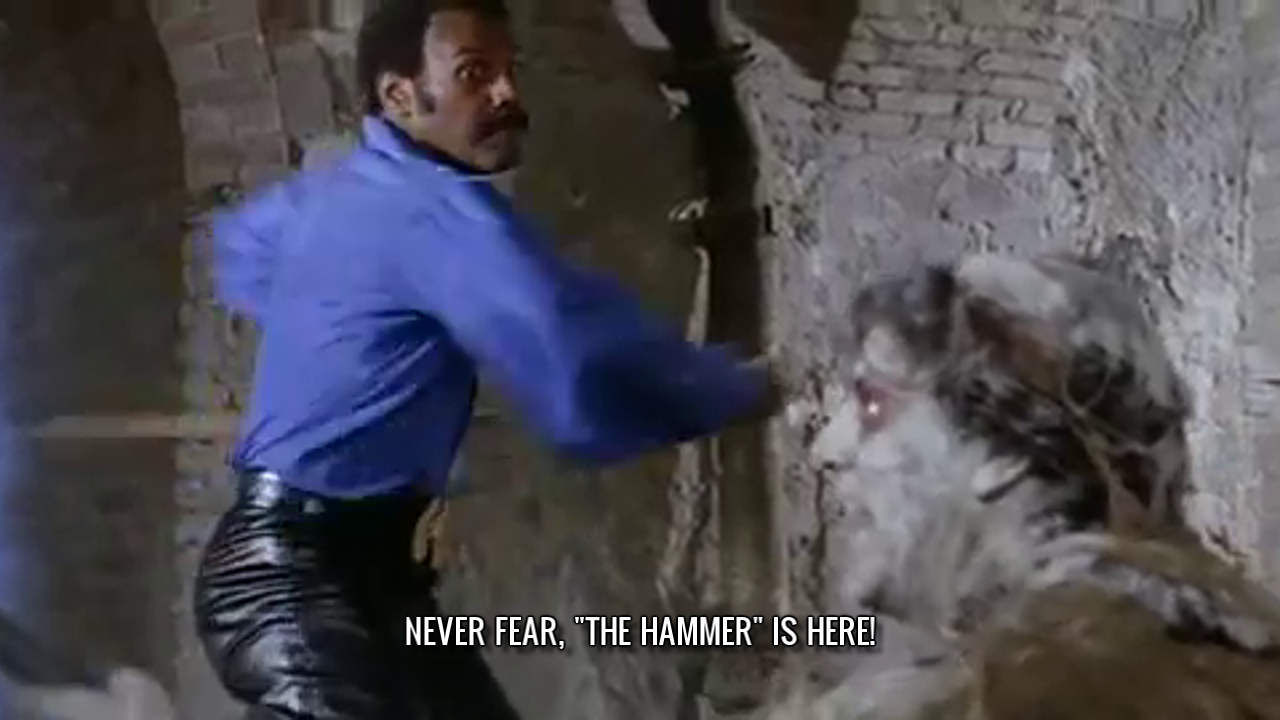 Everything comes to a head when The Ogre and Trash arrive at the Zombies’ hideout. The Ogre takes on the Zombie leader while Trash frees Ann and gets his revenge for Ice turning traitor. They then battle their way out against the entire Zombie gang before they return to the Tiger’s territory where they, together, defend themselves against a Hammer lead invasion of police armed with flame throwers.
This invasion is an all out slaughter. People are set on fire left and right. Over half of the people who bite it in this entire film die here in this final scene along with The Ogre, Hammer and even Ann. The only survivor is Trash, who rides out into the sunset dragging Hammer’s body by his motorcycle. The End. 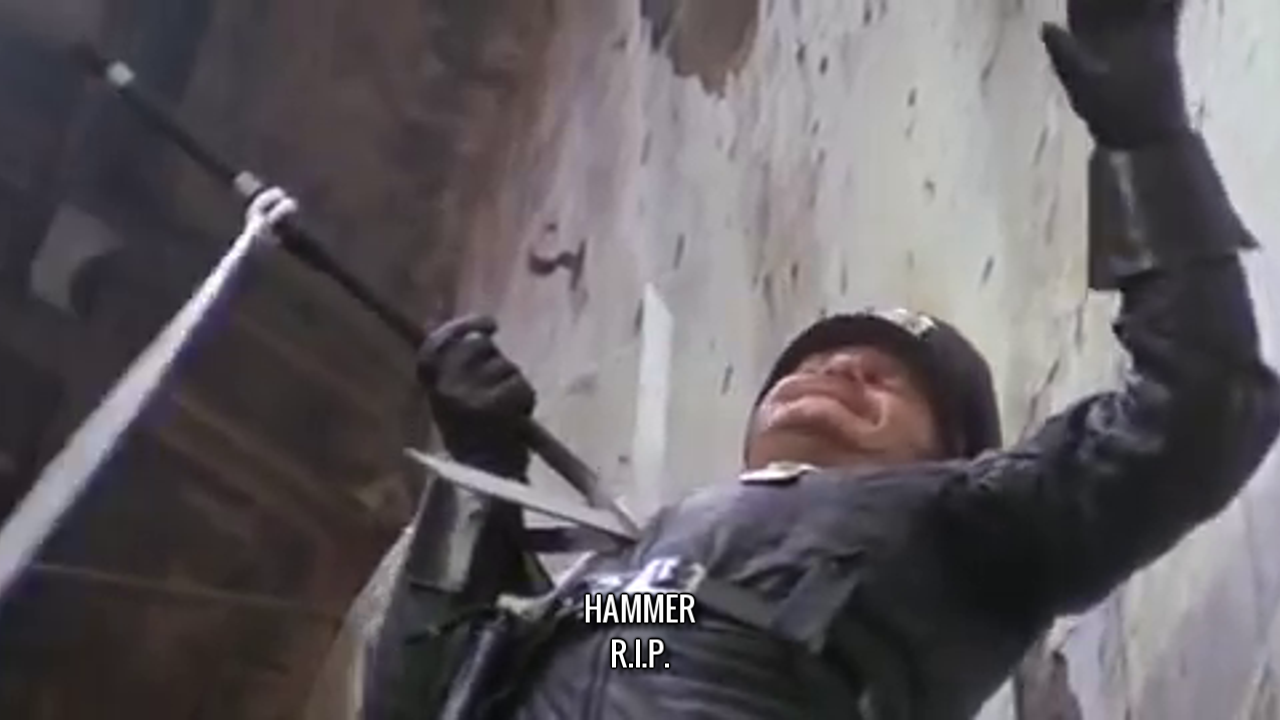 THE VERDICT
“1990: The Bronx Warriors” comes from Italian director Enzo Castellari and I believe THIS is the reason it falls into both the good and bad categories. While it isn’t original, which I’m sure you figured out for yourself from my referencing of several other similar films, but it is original enough in it’s own right. It is well filmed, acted and scored but has a distinct European feel to it which detracts from it’s action packed potential. It’s a bit subdued compared to American made action films of the same vintage.
Being an Italian film made in the States, the film is largely made up of an Italian speaking cast who have all been dubbed, which makes for some pretty interesting lines of dialogue… Or, maybe it’s the script that has been translated which makes for the interesting dialogue. Anyhow, one of my favorite  lines came from Trash when the Riders were discussing some planted evidence found where Hammer killed the two with his shotgun; “Look, it could be a pile of shit outta somebodies asshole!”. Weirdly specific when he could have just said; “Look, it could just be bullshit for all we know!”.
Speaking of Hammer. Why didn’t Fred “The Hammer” Williamson play the character Hammer? Sure Fred looks better dressed as a tough guy pimp, but with a name like that it just makes sense. 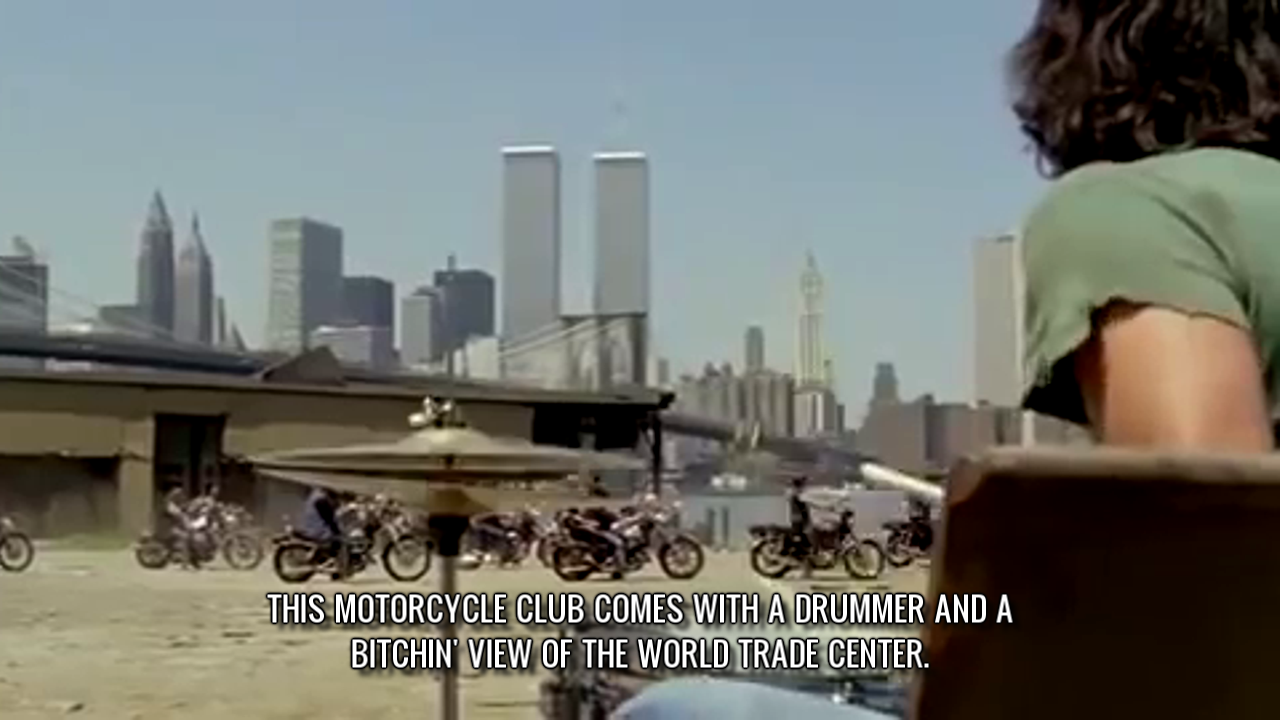 There were two other things that seemed strange that I would like to point out. The first occurs when The Ogre and The Tigers pay the Riders a visit to tell them about the “gizmo”. The whole time this scene goes on, there is a drummer playing. No, I mean the drummer is sitting next to the Riders, beating the skins all alone and I don’t know why he’s there other than he is REALLY good. Why set up your drum kit in the middle of nowhere just to play for a biker gang? Did the Riders call him ahead of time to let him know when they would be there, or does he always practice there and today there just so happened to be some heavy gang related shit going down? 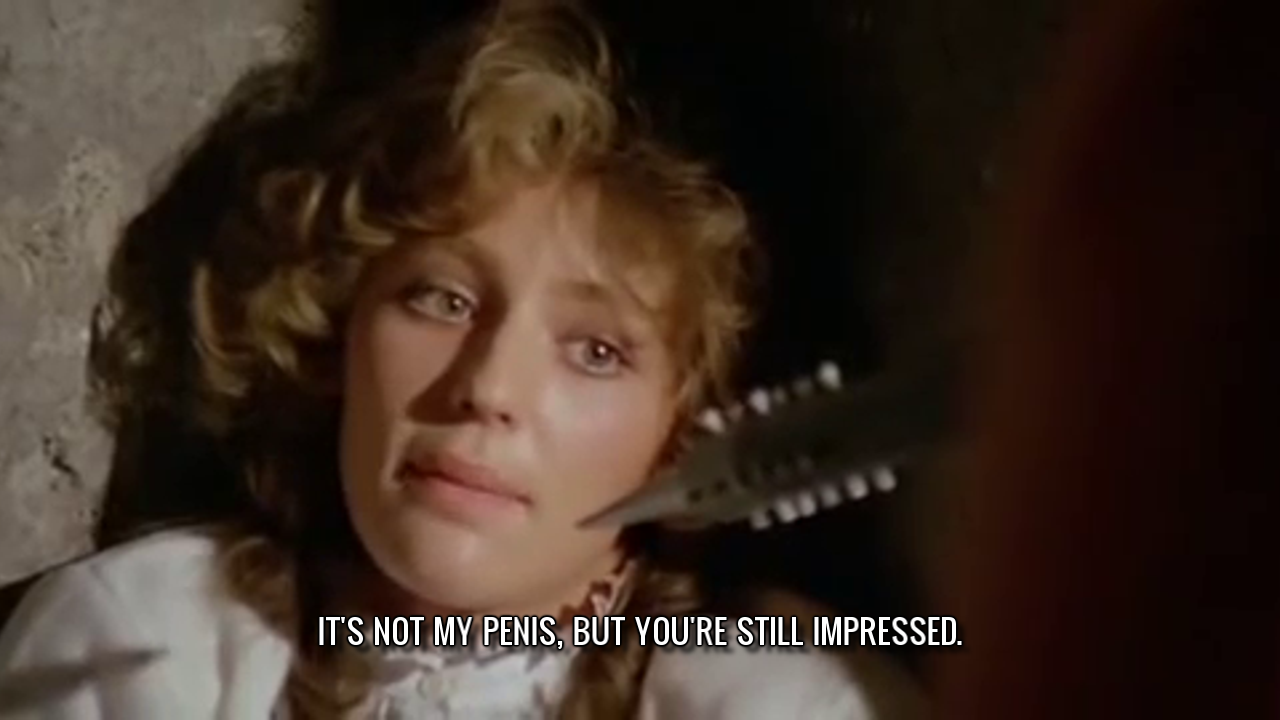 The second thing occurs when Ann is being rescued from the Zombies. As she watches Trash beat up some Zombie gang members in slow motion, she starts to breath heavy and her lip quivers. She is totally turned on by Trash’s brain bashing machismo. Then, moments later, as Trash is talking to Ann, who is sitting on the ground, we see the back of Trash and his mace like weapon poking out from in front of him. It just so happens to be at Ann’s eye level and she can’t take her eyes off of it. This is phallic as all hell. Leave it to an Italian filmmaker to come up with a way to turn that scene into a hidden moment of sex. 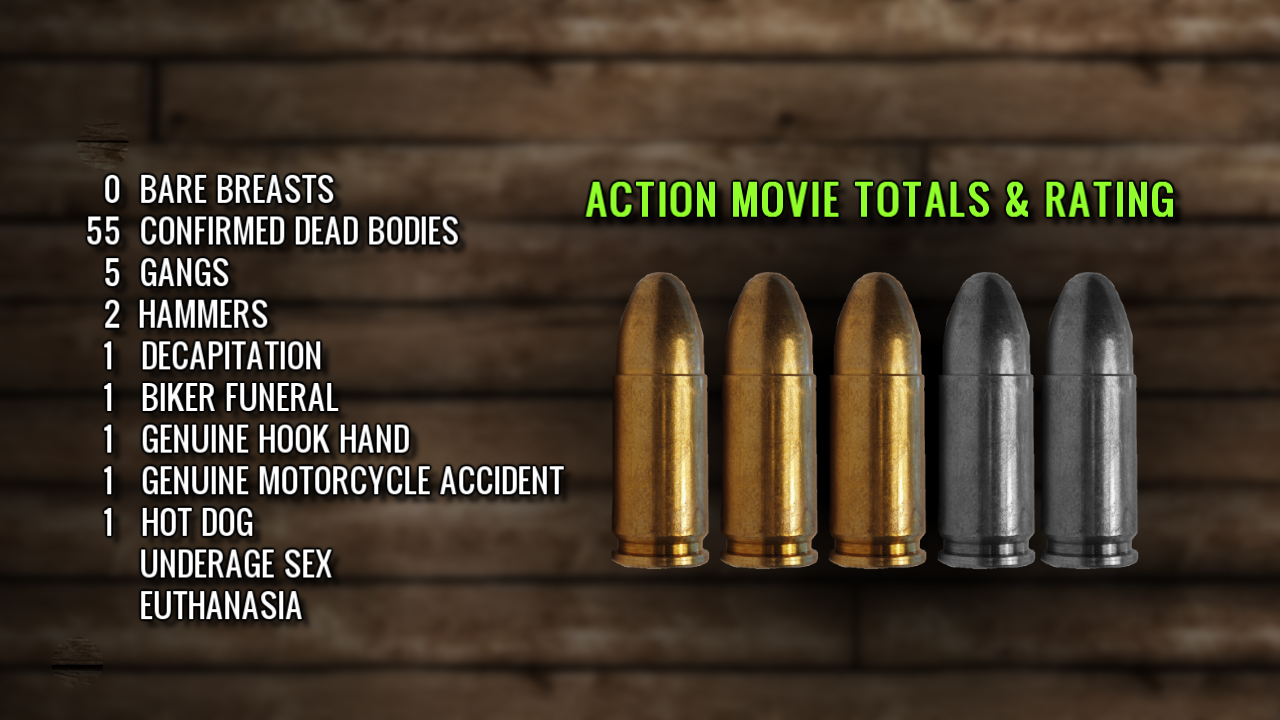 So in the end, it’s unfortunate that “1990: The Bronx Warriors” isn’t very original, but it is also too good to be bad. I feel that this could easily be a forgotten cult classic if it was able to stand out more from it’s peers with more than odd dialogue and sexual innuendo. In my opinion it should have been a full blown grindhouse flick with boobs and blood galore. Maybe it’s sequel “Escape from the Bronx” has a little more to offer.
Again, it’s not a bad film. Maybe if you’re bored with “The Warriors” you should give this one a try.
I’m Cory Carr and this concludes our trip on the “Action Movie Time Machine”. Until next time, Semper Fi!
For more from Cory, check out his website slaughterfilm.com, where he and his good friend Forest Taylor record weekly podcasts, reviewing the films that are legendary, even in Hell!

Yet Another 31 Nights of Halloween: The Stuff