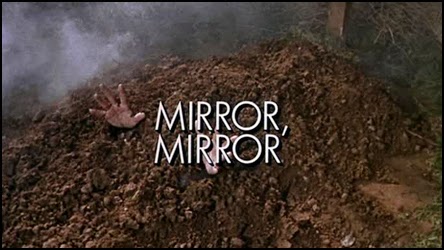 Okay so I’m going to try something a little different here. In the late 80’s, Steven Spielberg came out with a TV show called Amazing Stories that seems to ether grab a ton of flack or a ton of love. I never really watched the show, maybe a totally of two episodes of which I couldn’t tell you a damn thing about. I do remember the show and that opening but not a bit of memory regarding the episodes. So since Amazing Stories is on Netflix, I’m going to pick a couple of episodes out of order strictly do to the crew and actors that appear in that episode.

The reason why I picked, Mirror Mirror was because of the involvement of Sam Waterston (The Lead), Dick Cavett (plays Himself) and Tim Robbins (The Phantom).

Also believe it or not… 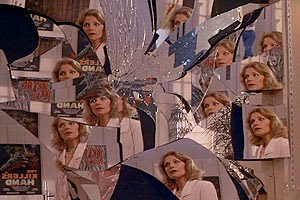 This episode is about a horror novelist who doesn’t believe in the subject that he writes. But he quickly begins to reconsiders this as he begins to see a man tying to kill him. The only time he see this figure is when he looks into a reflective surface, which shows the man gaining on him with the intent to strangle him. It’s not a bad story for a 24 minute show. I found the 24 minutes to be very entertaining, might not be the strongest story ever but so far it’s my favorite out of the four that I’ve watched. Keep in mind this show is called Amazing Stories yet so far I haven’t really seen an amazing story. They’re mostly okay stories with a good twist. Maybe this is mostly why I’ve seen Amazing Stories get more flack online then love. 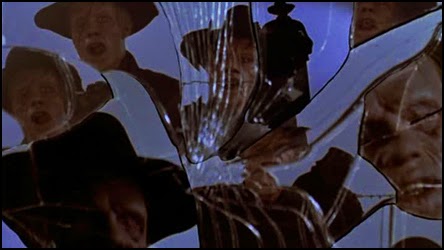 Scorsese does a good job. He keeps the 24 minutes fast and fun. Believe it or not that wasn’t the main attraction for me, that honor was given to the great Sam Waterston as Jordan Manmouth. Every time he is acting he just steals the scene if its Law & Order or The Newsroom, he just steals it with his presence. He plays a guy who just losses it and you can believe it. He really does steal that scene and even more made this episode flat out entertaining.

Defiantly give this episode a check out.

Dick Cavett plays Dick Cavett and I enjoyed the little addition of him to the story.

Tim Robbins is also along for the shows as The Phantom, although you couldn’t tell who the hell was  really playing the villain to save your life.

Yet Another 31 Nights of Halloween: The Stuff