Now-a-days comic book movies have become the saving grace of the summer blockbuster season. What were once exorcises in a maligned art form are now the most highly anticipated events of the year. So for the next few weeks we’re going to take a look at comic book films from back in the day. When they were still paying their dues. When all the answers to every problem wasn’t an army of digital effects artists and programmers. All aboard the “Action Movie Time Machine”. It’s time to visit the first
The year is 1979. A nuclear power plant known as Three Mile Island, had a near melt-down. Robert Duvall loves the smell of napalm in the morning”. Young men and women with radical hairdos mourn the death of punk legend Sid Vicious. All this and Reb Brown throws his shield as “Captain America”.
THE SKINNY
It all begins with Steven Rogers, Reb Brown, who has just returned home for a long stint with the Marines, from which he has been discharged. His plan now is to see America, as he drifts from town to town in his killer ’70s pussy-mobile. Complete with seagull “van art”. With his military career behind him, Steve plans to get along by selling his paintings… Not the Captain American you remember from the comics? 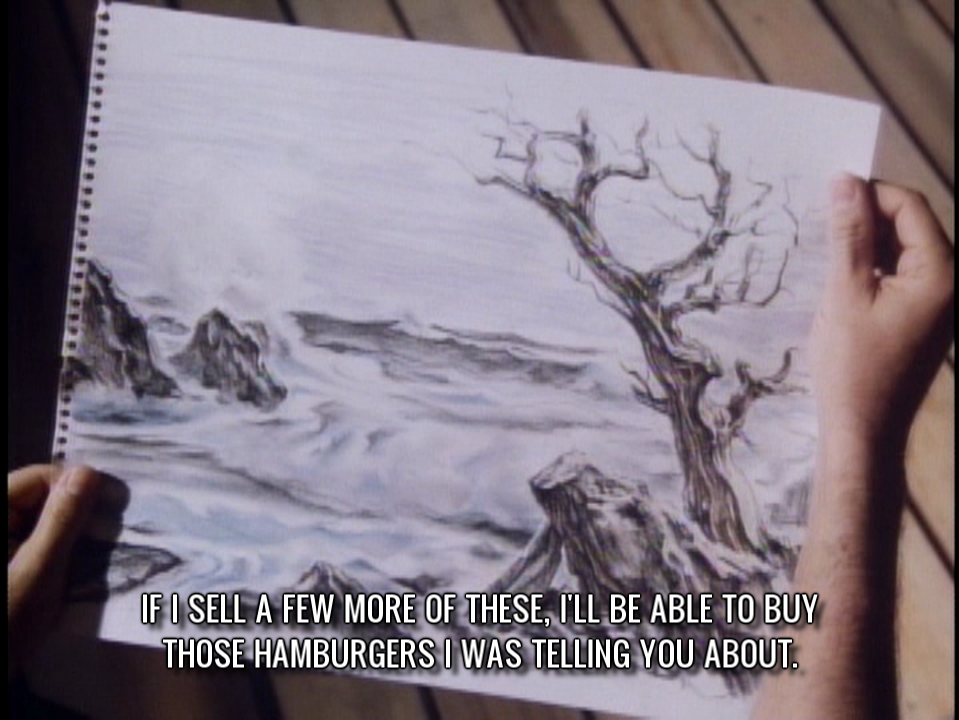 This is all fine and well until he receives some distressing news from Jeff, an old friend who asks Steve to meet with him. As Steve makes his way to meet Jeff’s home, a group of teamsters attempt to  kill Steve by creating an oil slick on the cliff side road Steve is traveling on. Steve loses control and slides off the edge of the cliff. Miraculously, Steve emerges unscathed and doesn’t seem to be alarmed in any way.
This oil slick scene consists of Steve trying to regain control of his van for over thirty seconds. It doesn’t sound like much, but believe me, it’s classic ’70s goofy. Aside from it being goofy, this scene stands out because one talented madman had to operate the van, sliding on the edge of a cliff, as they filmed the scene. Bravo! 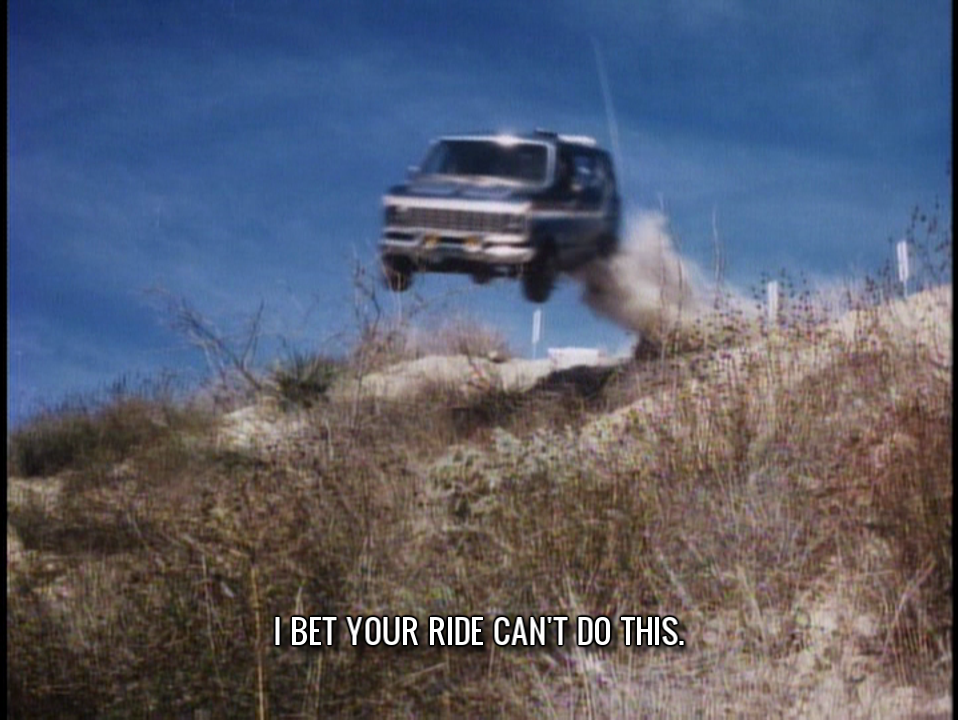 Eventually Steve arrives, only to find Jeff murdered. He meets with Simon Wells, a scientist who once worked with Steve’s father conducting secret experiments and carrying out highly classified projects for the United States government. Simon suggests that perhaps Jeff’s death and the attack on Steve could be connected. Someone must be trying to get their hands on Jeff’s data concerning the Neutron Bomb which he has been building. And Steve was attacked because…his father, who is now dead, did…umm…stuff..?
Steve’s father was developing a special steroid to boost the average man’s strength and endurance. This synthetic steroid is called the “F.L.A.G. Serum”. Simon now wants Steve to follow in his fathers footsteps by taking the FLAG Serum and using his increased strength to help protect the Neutron Bomb.
This is around the time our story develops in two ways;
The first being a terrorist crime boss plot  to build a Neutron Bomb and detonate it in the metropolitan area of Phoenix, Az. The bomb will kill everyone within so many miles, but leave everything else untouched. With everyone dead, his men will be able to walk right in and steal the city blind.
The second is Steve wrestling with the temptation of his newly found freedom and instead taking on the responsibility of becoming a super soldier and fighting off terrorists. What helps Steve make up his mind is several more attacks on his life by hired goons. One of which is almost fatal. Steve’s life is saved when Simon injects the FLAG Serum into Steve while he is unconscious. The serum works and Steve recovers almost overnight. 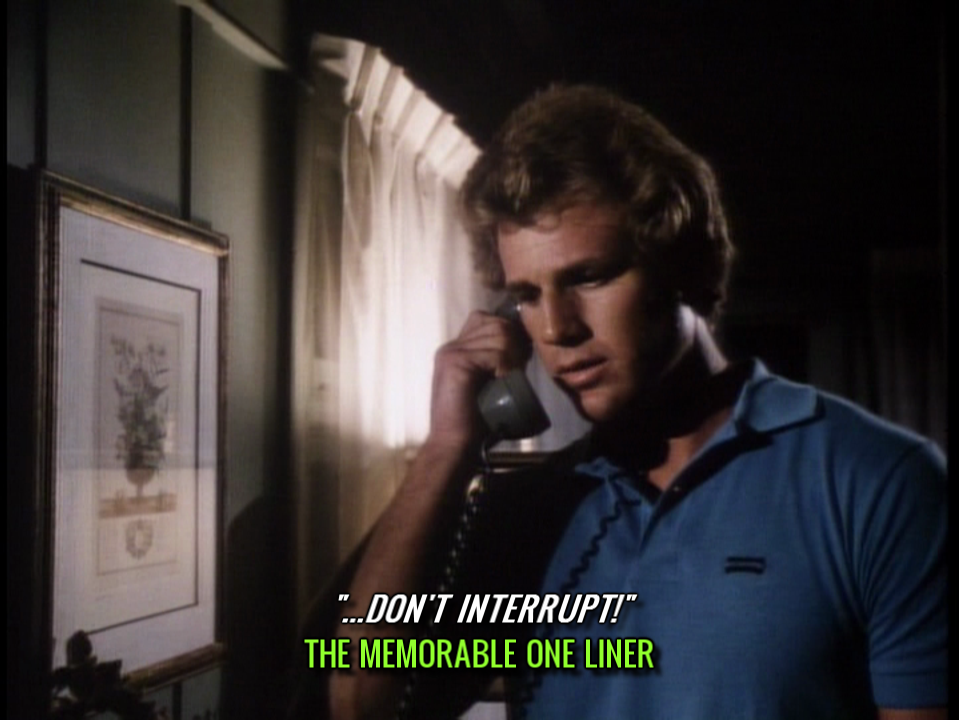 With Steve now on board, Simon has a red, white and blue costume designed to conceal Steve’s identity while he’s fighting for America. This new outfit comes with a Plexiglas shield, a refurbished van complete with high-tech doo-dads and a patriotically painted motorbike. 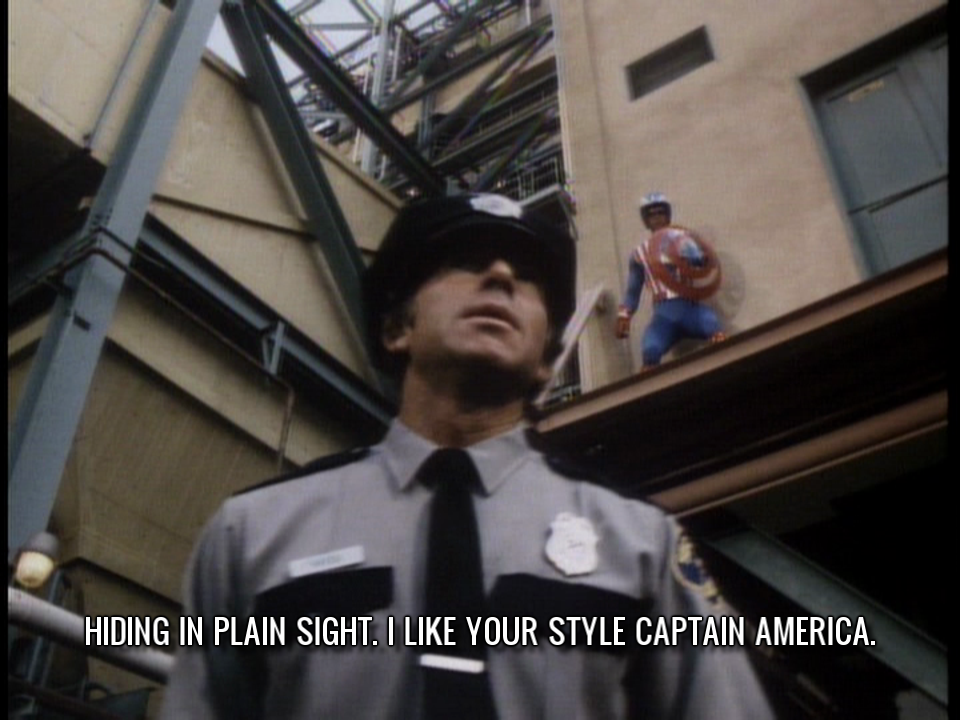 With the Neutron Bomb now complete, Steve races to intercept it in transport. Once he does, Simon meets Steve to disarm the bomb before it blows…which he does… The End.
THE VERDICT
Before I share my thought on “Captain America”, I would like to cover a little bit of Marvel movie history.
This is the second time Captain America was portrait in any live-action incarnation. The first being a fifteen part serial starring Dick Purcell, from 1944. It was a poor adaptation of the then Timely Comics character. Purcell played District Attorney Grant Gardner who became Captain America to prevent a mad doctor from acquiring equipment to build super weapons. No super soldier serum equals no Captain America in my opinion.
Now, years later, Marvel had been trying to take the company in other directions. They were chomping at the bit the to have more of their characters adapted into film and television. The only problem was that the technology, at the time, wasn’t powerful enough portray some of the more fantastic super human concepts. The various production teams that worked on these projects were also often limited by budget. These shortcomings resulted in either one of two things.
They had to re-imagine certain character elements, simplifying them to help sell the overall production. Or they tried to make do with what they had and failed miserably. The Incredible Hulk television show was a good example of this. Rather than adding ridiculous prosthetic makeup and costume to Bill Bixby’s character (David Banner) to make him look like the Hulk, they just painted Lou Ferrigno green. They kept it simple, focused on the characters and it worked.
The same goes for this film. Reb Brown actually plays the son of Captain America. This way Universal Studios didn’t have to spend the extra money turning the film into a period piece set in some foreign country so Captain America could punch Hitler in the face. What doesn’t work so much is that his shield and costume are completely re-invented. He looks nothing like the Steve Rogers/Captain America from the comic book and comes off pretty goofy. But, after all, it was the ’70s. If I’m not upset about Batman’s “Tumbler” not looking like the classic Bat-mobile, or that he has shark repellent in his helicopter, or that “Bat-nipples” are a thing, I guess I can’t get to excited about a Plexiglas shield and motorcycle helmet.
The REAL problem with “Captain America” is that it is a ’70s made for television movie of the week. And with that it has hammy acting, poor edits, mediocre special effects, it lacks a major comic book villain and it drags a bit in the middle. Is it a great film? No. But it is a pretty fun super hero time capsule.
It aired on CBS long before my time, but I could imagine being a child back in ’79 – sitting in front of the television, patiently waiting for the movie to start and complaining that the commercials are taking too long. Mmmm, the sweet smell or nostalgia. 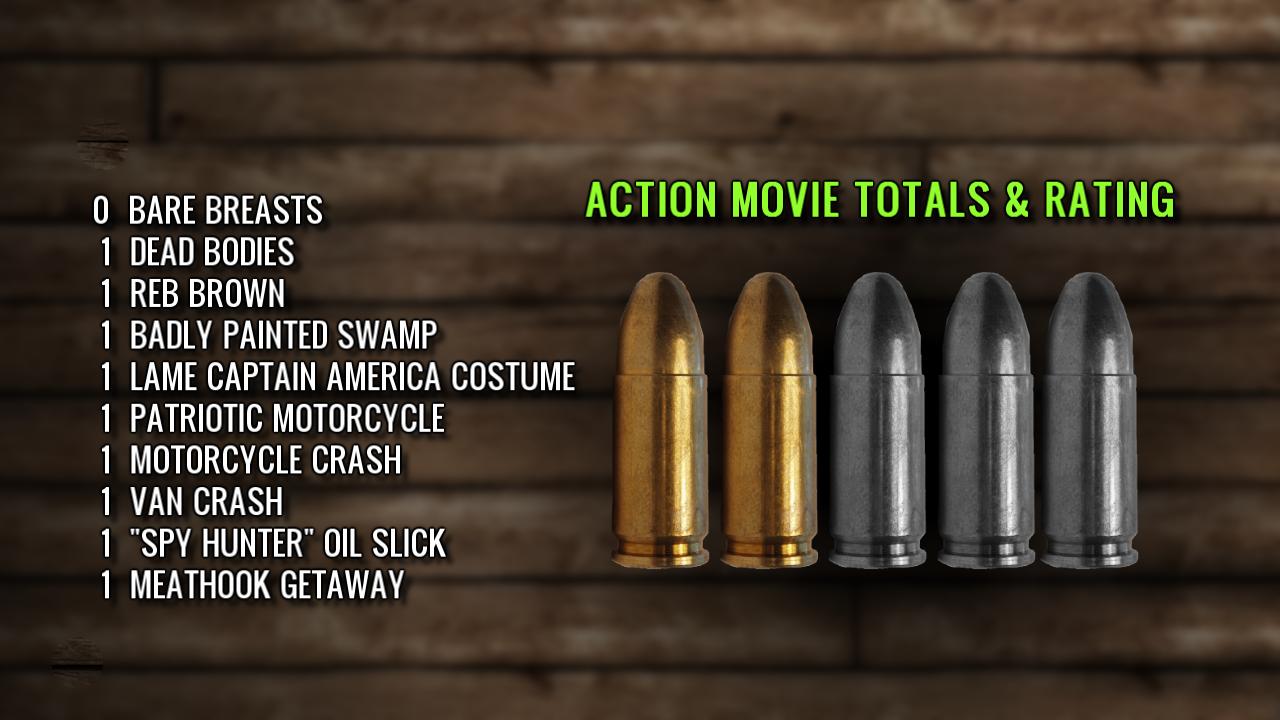 So in conclusion, “Captain America” isn’t for everyone. But for those of you who are comic nerds or if the ’70s were your heyday — you’re going to love it.
I’m Cory Carr and this concludes another trip on the “Action Movie Time Machine”. Until next time, Semper Fi Punk!
For more from Cory, check out his website slaughterfilm.com, where he and his good friend Forest Taylor record weekly podcasts, reviewing the films that are legendary, even in Hell!

Birdman or (The Unexpected Virtue of Ignorance)