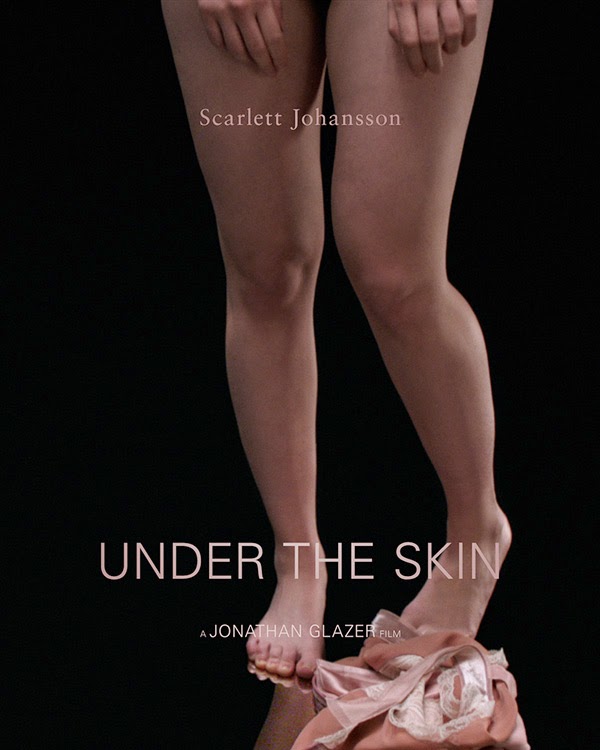 Under the Skin – Alien
Sometimes I simply find it difficult to preface a film. So without further ado I’ll jump right into it. “Under the Skin” is one of those films that defies preconceptions and to be honest with you, just might be one of those films that will surprise many, if said many are willing to give it a chance and really try to understand an alien concept; a woman who is willing to sleep with a man from Scotland…..(I kid, I kid).
“Skin” is the story of a mysterious woman, played seductively and as sultry as ever by Scarlett Johansson. She drives a van, lures men into said van, and leads them to their doom. She is followed by a duo of mysterious motorcyclists who seem to clean up whatever mess she leaves behind. Things start to spin a little out of control after one of her encounters has her letting loose one of her quarries and going on the run. This is where they say, “the plot thickens.”
To go any further would be to do a disservice to the rest of the film, and going cold into “Skin” is one of the best things that you could do for this film. Director Jonathan Glazer, best known for “Sexy Beast” combines the best of art house cinema with trippy effects to create an engrossing, thinking-persons, science fiction weird-fest. What also stands out is the excellent score by Mica Levy, which plays like combination of Radiohead, Aphex Twin, and Wendy Carlos.

What I think has been missing from sci-fi flicks for a while is the notion that a setting needs to actually be alien, or cosmic, in order to make it a real sci-fi film. What I think is the most underrated aspect of “Skin” is the fact that the film takes place in Scotland. Let’s be honest, how much do we all really know about that land of Scotland outside of “Highlander” and Sean Connery. The landscapes and dialect almost become a character in and of itself and add a wrinkle to the story you wouldn’t expect.

Now the elephant in the room; the performance of Johansson, and I’m not just talking about her acting ability. One of the things that got a lot of attention leading up to the release of this film was the fact that Johannson shed all of her clothes for the role. While it’s nothing new for well-known actresses to ditch the clothes and show the goods, it’s a tad more newsworthy considering we are talking about an actress known for playing Black Widow in the Marvel Cinematic Universe. However, her disrobing shouldn’t take away from her simple, yet effective performance. Most of her acting isn’t done through dialogue, but rather her movements and body language, and I might go as far as saying this is her best performance to date.

Another misconception is that “Skin” is simply a “Species” rip-off with stronger feminist undertones. Yes, on paper the fact that you have a mysterious women seeking men out and later dispatching them is pretty “Species”-like, but the comparisons can stop there. “Skin” features a very strong female character whose intentions aren’t truly discovered until close to the start of the third act, and even at that point we see that character’s intentions shift after a chance encounter with a specific character she picks up and is ready to dispatch. However, while I do enjoy the power that Johansson wields over her quarry, the third act flips the script and changes who may or may not be in control. I know some of this sounds cryptic, and that is the point. My intention is to entice you to watch a film that is certainly worthy of your attention and is an interesting take on male/female relations and interactions.

So, with that being said; should you see “Under the Skin?” See above please, of course you should. It’s one of the most original sci-fi films in quite a while, with a daring performance by Scarlett Johansson and some of the most “alien” cinematography of 2014. Sure we’ve gone to the far-reaches of the Marvel Universe, Earth under the rule of talking Apes, and even traveled back into Biblical-times on an ark, but the way Glazer created a practically alien world out of something that exists on Earth hasn’t been done since Peter Jackson created Middle-Earth with the help of New Zealand.

Fun Fact: In 1979, Robert Taylor claimed to have been nearly abducted by aliens in Dechmont Law in Livington, West Lothian, Scotland in what has been called the Dechmont Law Encounter.