Our journey thru Marvel’s superhero flops of yester-year is nearly over. I’ve saved the best for last. Or, the worst for last. The most notorious comic based movie to ever be made — the Roger Corman produced “Fantastic Four” film from 1994. All aboard the “Action Movie Time Machine” as we will be crossing thru the Van Allen Belt with our final destination being the Marvel Universe.
The year is 1994. A wonderful thing came in the form of a bra. Jackie O., Kurt Cobain, Nicole Brown and Mufasa all passed away. And Sony released the Playstation.
THE SKINNY
The film begins with Reed Richards and Victor Von Doom. College students who are working together to build a device…that does, something. With it they are going to be able to…do something… Anyhow, this is only important because “Colossus”, an interstellar anomaly, is passing through the Earth’s Van Allen Belt. As the two men get ready to use their device in time with the arrival of the Colossus, the machine receives a surge of space energy that directly blasts Von Doom, killing him. Or so we think.
By the way, the Van Allen Belt is a layer of charged particles that is held in place around a planet by it’s magnetic field. Ya know that force you feel when you put two repelling magnets together? Well imagine teeny-tiny, nearly invisible particles trapped in that force. If I’m not mistaken, the Aurora Borealis is when some of these particles make their way through the belt and into the Earth’s atmosphere, generating a light show. But how would I know? 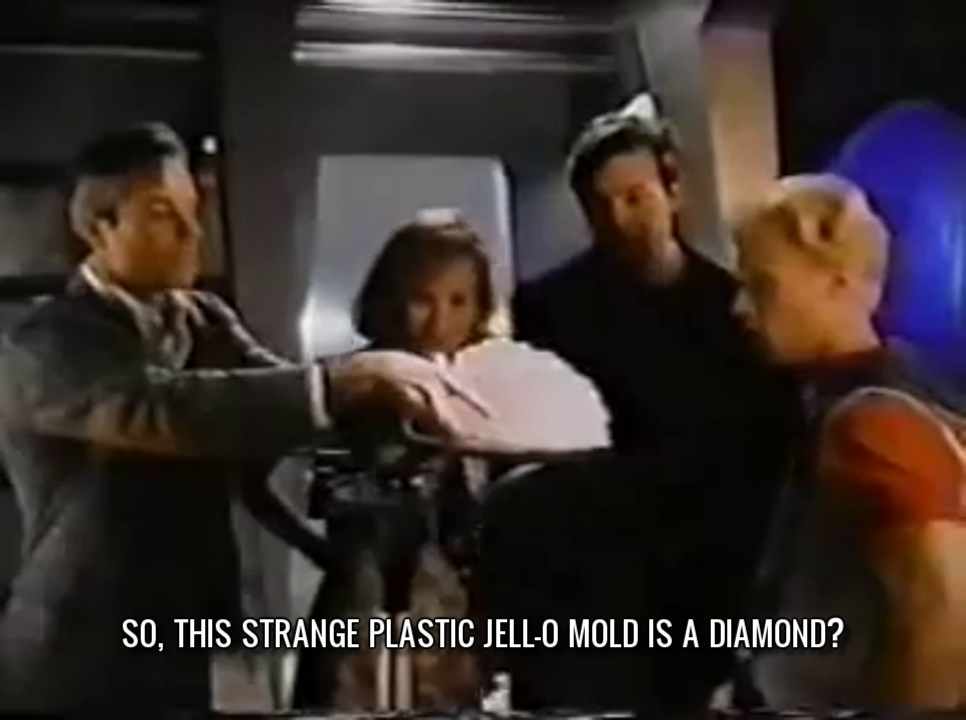 Now, ten years later, Reed Richards has become a top notch physicist who is recruiting a group to accompany him on a space launch. The craft, he designed and built himself, but he needs the help of Ben Grimm to pilot the craft, and Sue & Johnny Storm.
The mission is to observe and record information on the Colossus, which is making a return visit. To protect themselves from the same energy blasts that took the life of Doom, Richards has found a way to use a very rare diamond to absorb and deflect the energy. This is some high-tech stuff huh? The problem with that is that a jewel thief, known as the Jeweler, stole it in the night and replaced it with a fake.
Once in space, the four are bombarded with cosmic energy and are blown back to the Earth’s surface. The four have become fantastic. Reed can stretch like a rubber band, Sue can turn invisible, Johnny can wield flame and Ben has slowly turned into a rock monster. 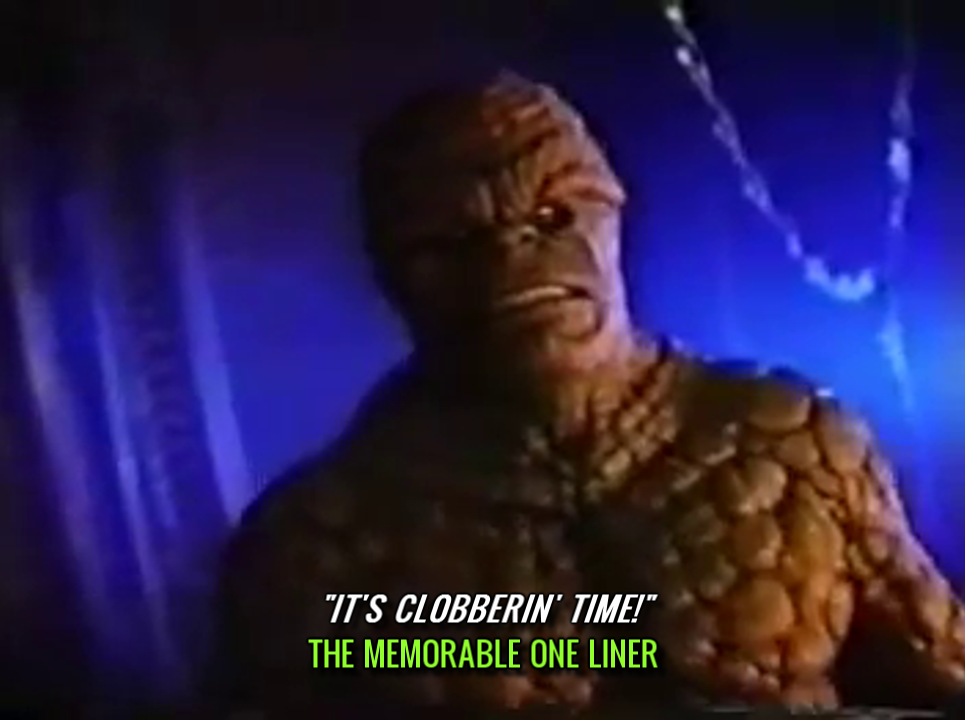 As the Fantastic Four try to understand what has happened, a metal masked madman known as Dr. Doom begins to scheme. He sends his henchmen out to retrieve Reed and the group, disguised as U.S. military. He then has a crack scientist run tests on the four in an attempt to discover the key to their transformation. Once this secret is known, Doom will have the same done to himself and he will become all powerful. Once the fantastic four realize what is happening, they use their newly found powers to escape Doom’s facility.
Doom now moves on to another part of his plan. He pays the Jeweler a little visit and retrieves the stolen diamond that he will use to power a laser called “Cyclops“. Another reference to X-Men. Once operational, Doom will use the laser to level New York. Then he’ll exact his revenge against Reed and his friends. Revenge? Doom feels they are the ones to blame for his accident at the beginning of the film. Why? Who knows. Who cares. But in doing so, Doom will steal the powers of the Fantastic Four. 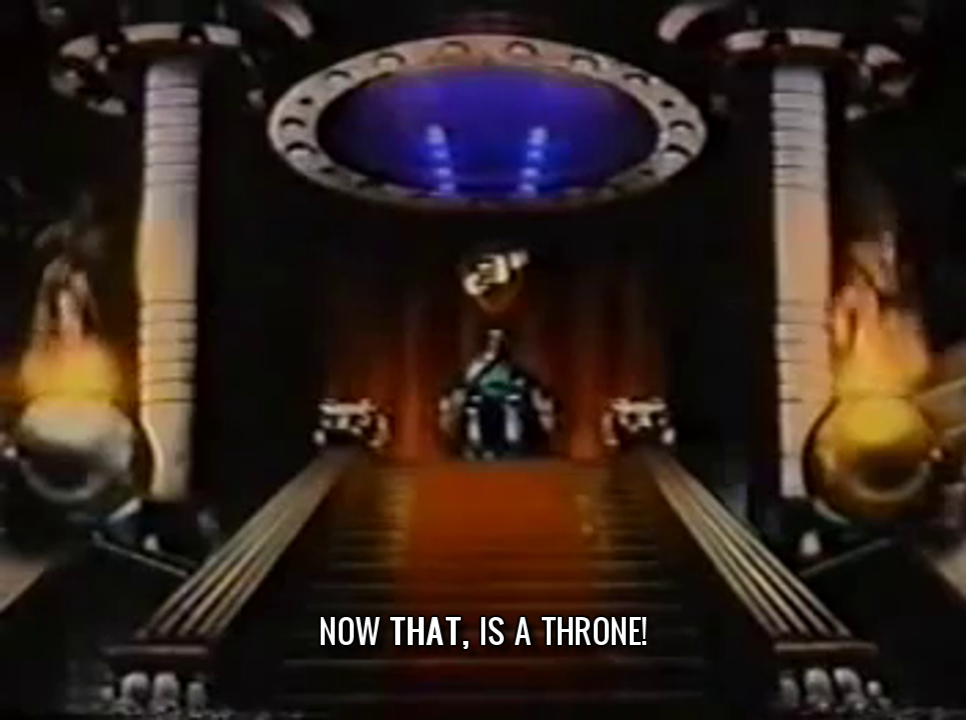 As a side note, I just have to share a real gem from Doom. He arrives in the Jeweler’s lair and demands the diamond. The Jeweler points a gun at a young woman’s head, telling Doom that if he touches the diamond, the girl dies. To which Doom replies; “…so.”. LOL The Jeweler doesn’t know who he’s messing with. 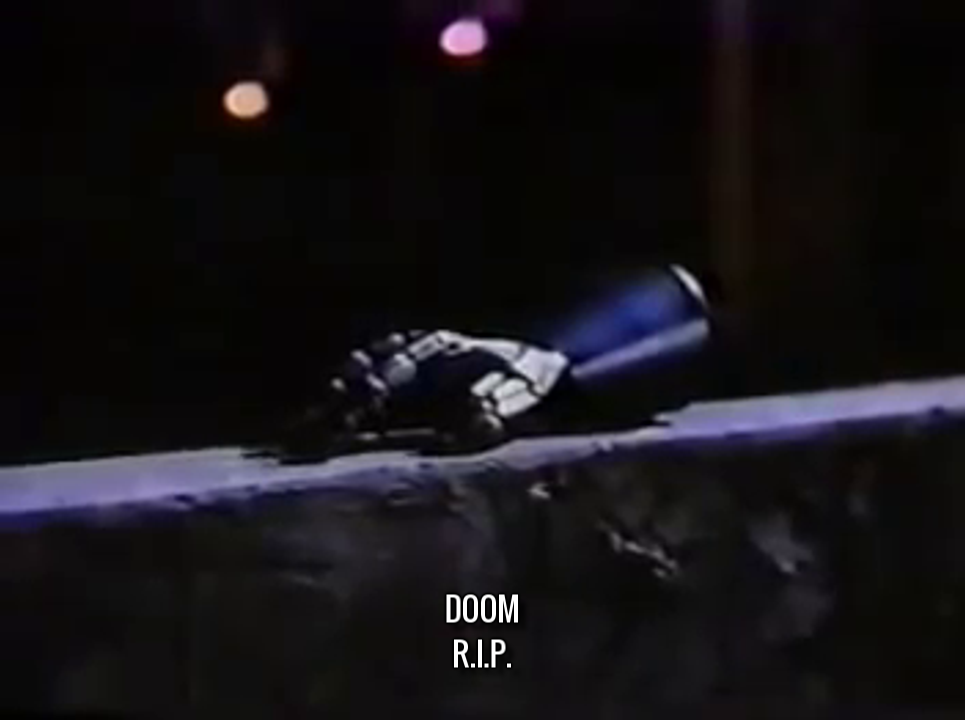 In classic movie villain style, Doom finds a way to explain his entire plan to the Fantastic Four, as if they wouldn’t try to stop him. Reed and his team fly to Doom’s castle, where Mr. Fantastic, the Invisible Woman and the Thing kick his ass. New York is saved from the laser attack by the Human Torch, who can apparently, fly faster than light. The movie ends with wedding of Sue and Reed. Just like the comic, and just like the 2005 film.
THE VERDICT
As I have during that past few “Retro Super Hero Flicks”, allow me to do some explaining before I share my thoughts.
“The Fantastic Four” was never meant to be good. It wasn’t even meant to be released. Of course the cast didn’t know that. Marvel had sold the rights of the “Fantastic Four” name and characters to a production company. When this happens, that ownership is temporary. If the film isn’t made, the contract expires and the production company loses access to those properties.
This is what was going to happen, and to prevent it from happening Roger Corman was contacted, “The Fantastic Four” film was given the green light and a measly one million dollar budget was allocated. Sounds like a lot, but in movie terms it’s chump change.
With a “FF” film in the can the production company would then have more time to develop the property into something profitable. Something good.
The story, while simple and honest to the comic, can be a bit confusing at times. Dr. Doom is the king of his own country with all kinds of power and resources, but yet he is hell-bent on seeking revenge for the accident that almost killed him. Which wasn’t even the fault of anyone in Reed’s group. Why Dr. Doom? Why are you doing this? If anything, I could make the argument that his accident has made his life better.
The acting is par for the course for such a low budget film, as are the special effects. Goofy and cheap, but not embarrassing to watch.
My main problem with this film is that it sticks too closely to the original comic book. Sure there are differences here and there, like the motivations of Victor Von Doom that lead up to his “death”. But rather, the tone and visuals of the original comic book are too strong. Watching this is like reading the comic from the ‘60s. Being made and set in the early ’90s just isn’t believable with such a strong ‘60s identity.
Just imagine if Warner Brothers took the ‘60s “Batman” television show and re-made it for the ‘90s… Oh wait, that happened. It was called “Batman & Robin”. “The Fantastic Four” is just like “Batman & Robin” but with a fraction of the budget and no one making the film tried to have fun while they were doing it.
Again, this film wasn’t made to be good. Or even to be seen for that matter. It was simply made to be made and nothing more. So I honestly can’t crap on it too hard. It could have been made even less well and that would have been enough to satisfy the studio. 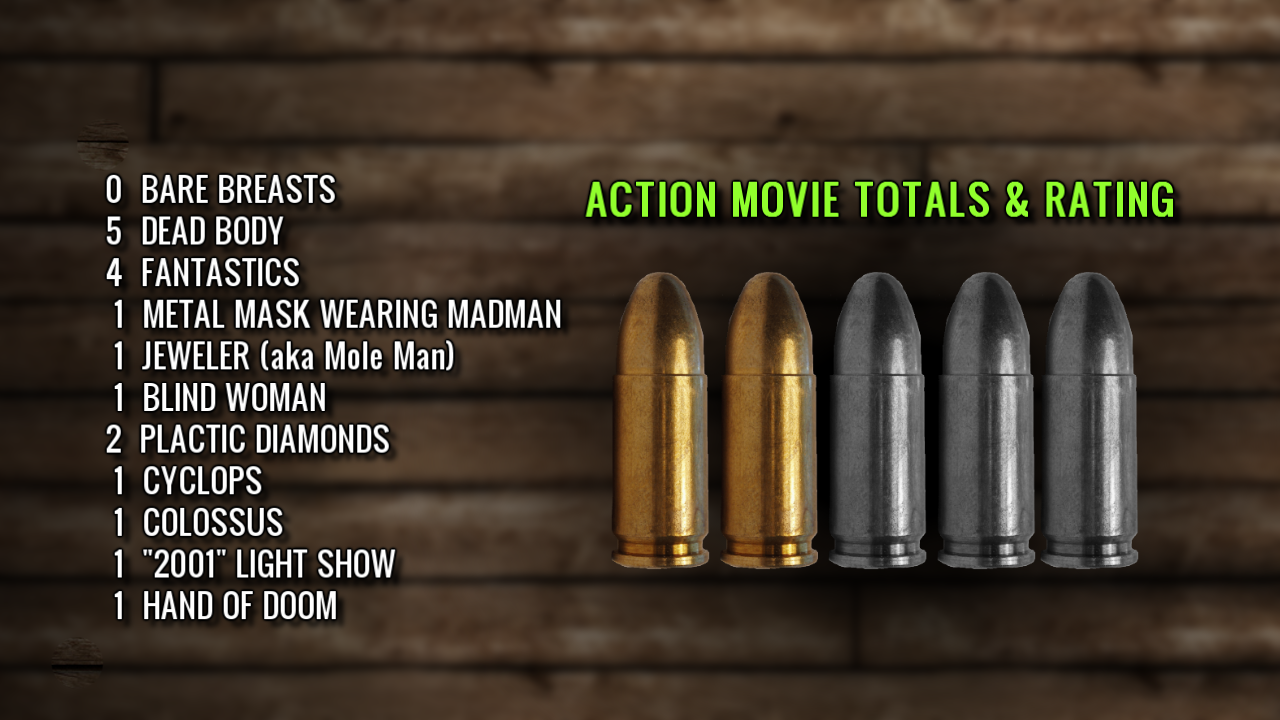 It’s an interesting oddity in film history that isn’t for everyone. But I feel that it’s a must see for every comic book fan boy. At least once. It’s tough to find in the wild but has been uploaded several times on Youtube. Check it out. It’s funny to see similarities between this and the 2005 film.
I’m Cory Carr and this concludes another trip on the “Action Movie Time Machine”. Until next time, Semper Fi Punk!
For more from Cory, check out his website slaughterfilm.com, where he and his good friend Forest Taylor record weekly podcasts, reviewing the films that are legendary, even in Hell!