It is the holiday season and I bet you in the mood for something snowy and action packed. Am I right? Well all aboard the “Action Movie Time Machine” as we’ll be jingling all the way to some mid ‘90s holiday fun.
Hey! Quit your bitchin’, it’s got Arnold in it. Oh okay, if you are looking for a seriousaction flick that takes place during the holidays, you might want to check out “Long Kiss Goodnight” starring Geena Davis and Samuel L. Jackson. But of course there is always “Die Hard”.
The year is 1996. The “Macarena” was a suicide educing dance craze that was storming the nation. It helped some forget the death of rapper Tupac. The “Uni-Bomber” was brought to justice, and the Nintendo 64 made it’s debut.
THE SKINNY
Our tale begins with Howard Langston, Arnold Schwarzenegger, an overworked executive who has made a bad habit of putting his job before his wife and son, Liz and Jamie. Howard recently forgot to go to his Jamie’s karate exhibition and now it’s the last stray. If Howard screws up one more time, he’ll lose them both for sure. 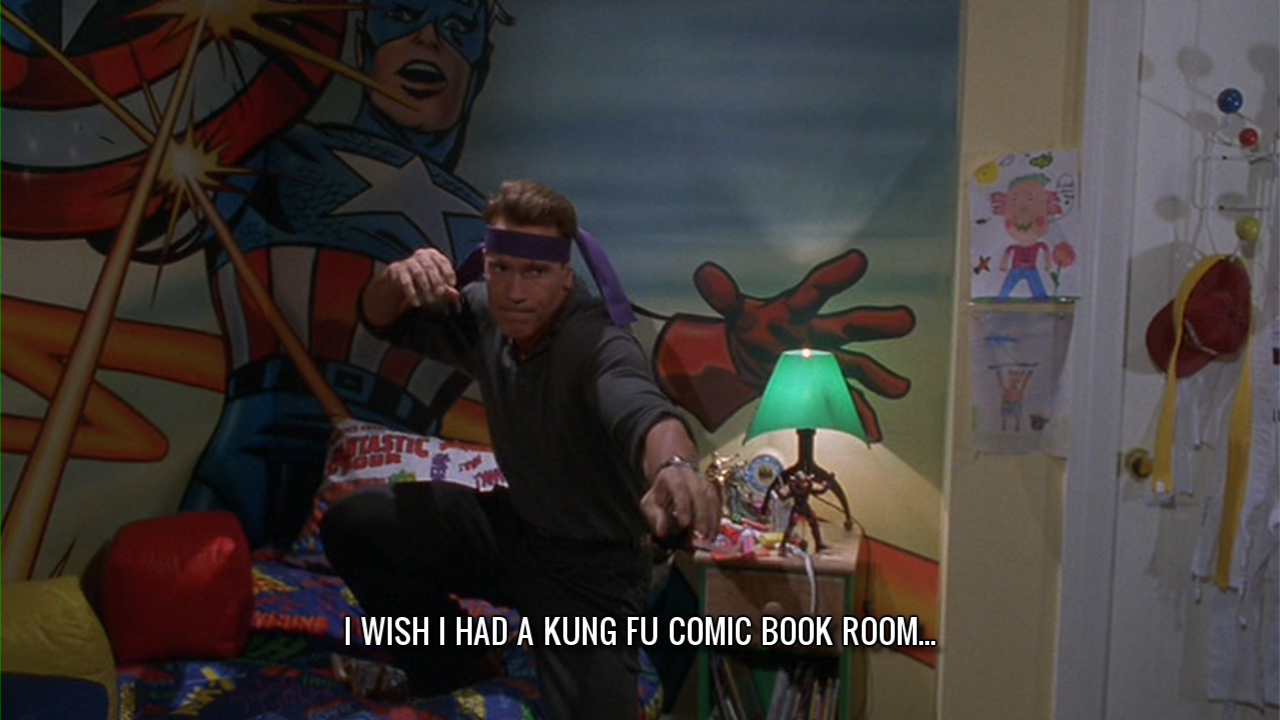 And just such an opportunity presents itself with Christmas. Liz told Howard months ago that he should pick up the wildly popular “Turbo Man” action figure for their son. “Turbo Man” is the new “Tickle Me Elmo” , every kid wants one, even Jamie, Jake Lloyd. Turbo Man is his favorite thing in the whole world. It goes without saying that Howard forgets to buy the toy, and the rest of the film is Howard frantically fumbling around like a man-baby trying not to disappoint his son.
The problem is that Howard isn’t the only one on the hunt for a Turbo Man. While at the local mall, traversing the waves of fat, last minute, toy hungry shoppers, he encounters Myron, Sinbad, a postal worker also on the hunt for Turbo Man. Howard and Myron compete against each other to land themselves a Turbo Man in time for Christmas. Hijinx ensue and neither man has their toy. 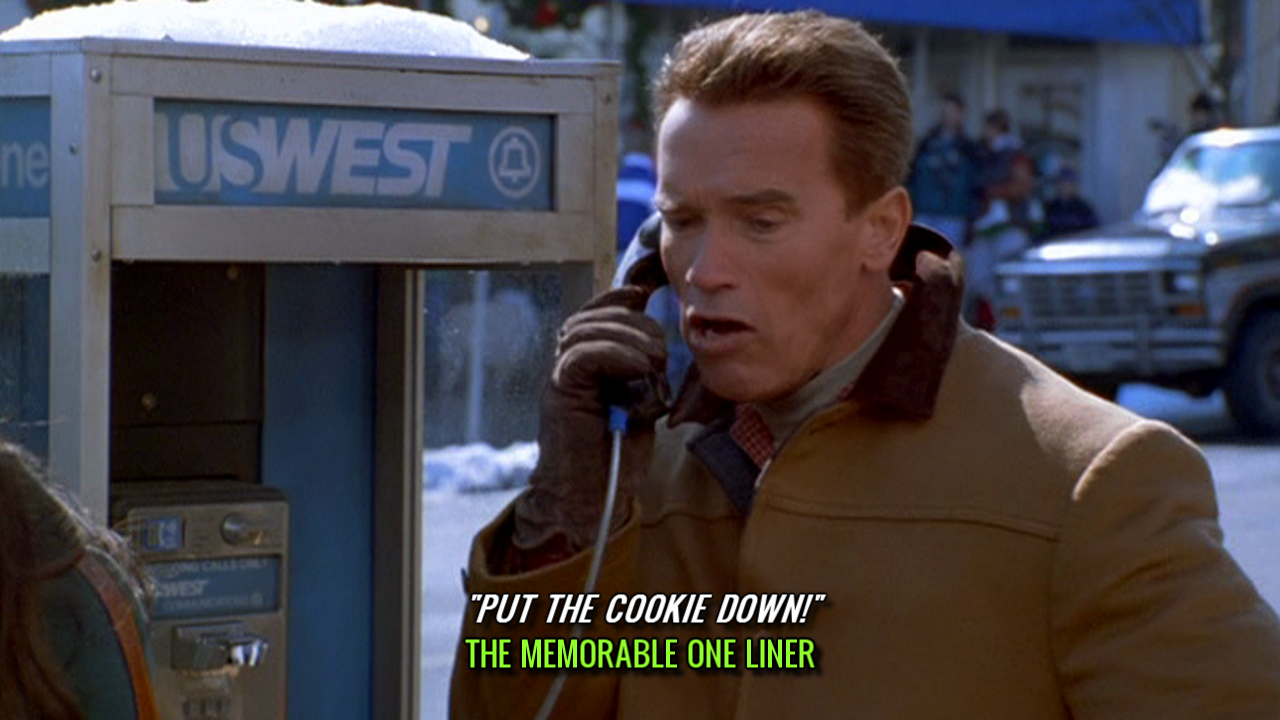 This lands Howard in the back of a warehouse looking to buy a “hot” Turbo Man from an underground league of hired Santas lead by “Mall Santa“, Jim Belushi. When Howard realizes that he’s being ripped off, he calls ‘em on it and a fight breaks out between Howard and “Huge Santa” played by Paul “The Big Show” Wight. Hijinx ensue and again, Howard is without the toy. There is also a tiny Santa played by Vern Troyer. “Jingle All the Way” is a regular Who’s Who.
Some other hijinx ensue that involve bombing a radio station, setting a neighbor’s house on fire and punching a reindeer in the face, then getting it hammered. Every word I just said is 100% true. 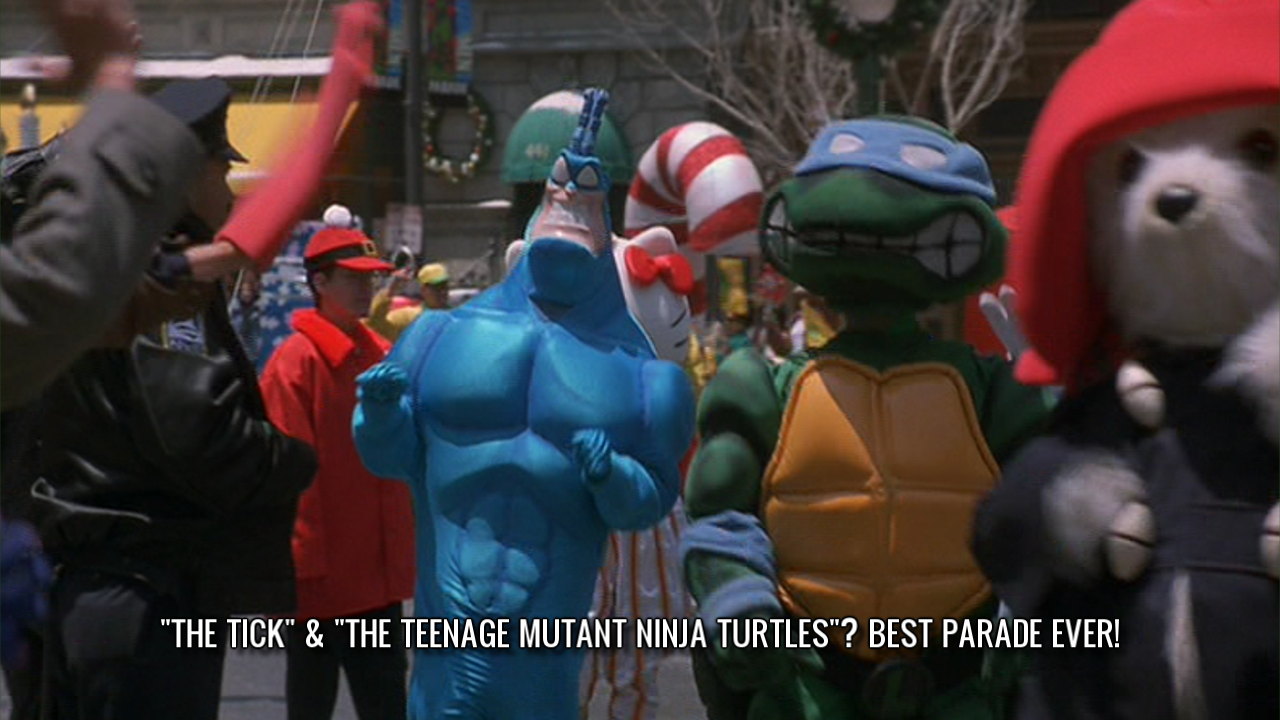 Liz and Jamie head downtown to watch the annual holiday parade with their neighbor Ted,Phil Hartman, and his son. Howard known that Ted is a bit of a Casanova, and when he sees them leave together he suspects the worst. Also, Howard knows that there will be a Turbo Man giveaway. He has to act quick if he’s going to save Christmas, as well as his family.
Once Howard arrives he is spotted by parade staff and is mistaken for the actor who will be donning the Turbo Man costume for the parade, and is quickly packed into the suit. Howard does a pretty good job playing the part, even performing with other Turbo Man characters, until Myron shows up dressed as Turbo Man’s arch nemesis, Dementor. The rest of the film plays out like a plot from an old superhero serial. Dementor holds Jamie ransom until his demands of a Turbo Man toy are met, and Turbo Man uses his jet pack to rescue Jamie, vanquish Dementor and save the day.
In the end, Howard had to become his son’s real life hero in order to earn his love. The End.
THE VERDICT
Well, that’s “Jingle All the Way”. It wouldn’t otherwise warrant an “Action Movie Time Machine” review, since it is a family film. A goofy one at that. But it is fun. It falls somewhere between it’s so bad it’s good and genuinely funny. Which is a strange way to describe it. The comedy isn’t strong, typical for a family film, but there are also some comedic gems hidden here and there.
It follows the standard formula of; A protagonist who is work obsessed and neglects his family. Something external forces this dummy to re-evaluate his priorities and apply himself. In this case it is his wife and son. Along the way hijinx ensue. This formula is the only way television execs make sit-coms anymore. And that’s why shows like “According to Jim” suck so hard.
What makes this film worth watching is all the “other stuff“. Seeing Schwarzenegger in his prime, acting like such a goof is a lot of fun. Almost as much fun as “Last Action Hero”. Playing the sit-com formula for slapstick laughs, juxtaposed against his bullet riddled and blood drenched career, for some reason, brings me joy.
Phil Hartman is the shit. It’s a shame there wasn’t more room for him in this film. He is a total highlight. Everything he has ever done is hilarious. The Pee-Wee Herman Show, News Radio, The Simpsons, SNL — all gold! Sinbad isn’t half bad either. A lot of his postal worker traits and comments flew under the radar when I saw this as a kid, but as an adult, I caught every perverted and insane one of the.
The  stuff I don’t like so much about “Jingle All the Way”, like the big headed annoying kid and the stereotypical force family feelings, are easy to overlook. After all, it’s a holiday picture. There aren’t too many of them out there that stray from family feelings this time of year. And ya gotta love a movie with superheroes, even if they’re made up.
One other quick thing I like about “Jingle All the Way” is the toys. When Arnold is running around the mall you get to see all kinds of now vintage toys on the shelves. Oh the nostalgia. This is also a fun game to play while watching “Silent Night, Deadly Night”, a not so family friendly holiday movie. 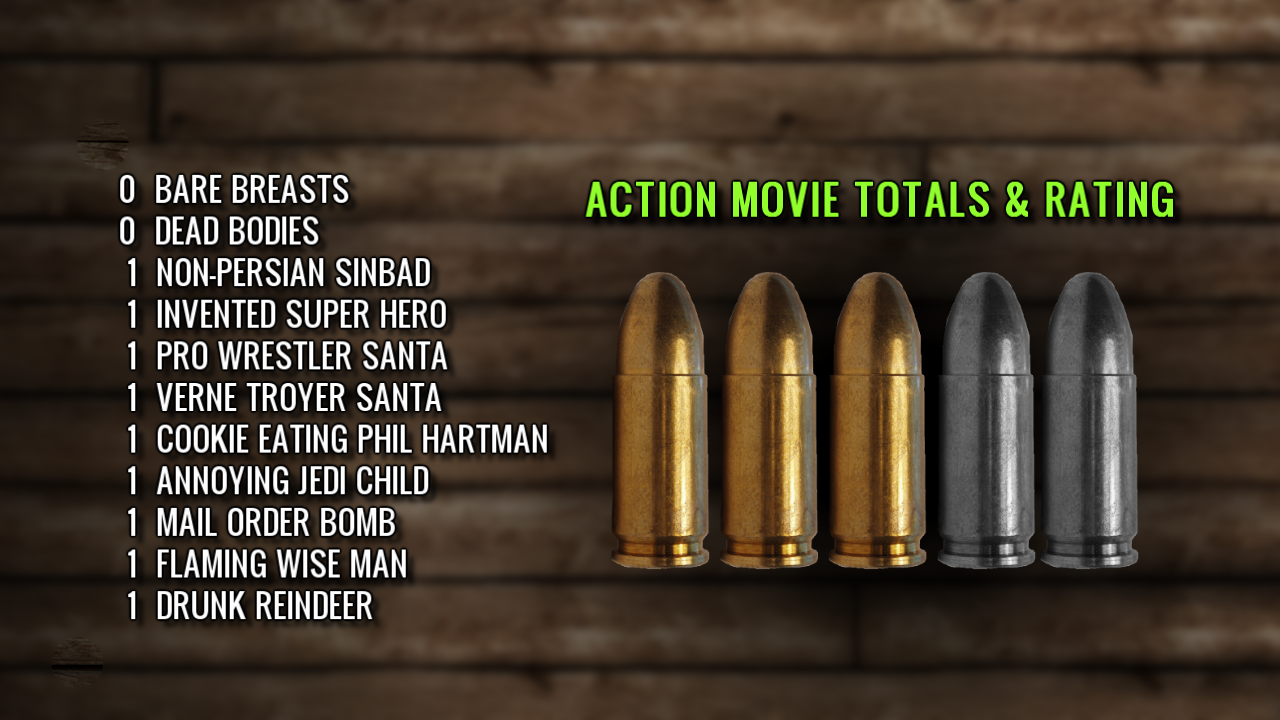 So if you’re in the mood for something different — something you can watch with the kiddies, “Jingle All the Way” is for you.
I’m Cory Carr and this concludes another trip on the “Action Movie Time Machine”. Until next time, Happy Holidays Punk!
For more from Cory, check out his website slaughterfilm.com, where he and his good friend Forest Taylor record weekly podcasts, reviewing the films that are legendary, even in Hell!