Welcome back to another “Action Movie Time Machine”. As we continue our trek into the realm of action films that have a flair for the more macabre, “Horror Movie Killers”, we will be looking closely at Sylvester Stallone and a Danish model who teach a killer cult how to love again in “Cobra”. All aboard! The “Action Movie Time Machine” is now departing.
The year is 1986. RUN DMC made Aerosmith popular again with “Walk This Way”, everyone learned not to take soap-operas so seriously when “Dallas” had all been a dream and “The REAL Ghostbusters” started kickin’ ass and takin’ names.
THE SKINNY
“Cobra” begins with a nameless mad man, armed to the teeth, who has strolled into the local supermarket and begun blowing people away. All in the name of something called “The New World”. The local police call in their special weapon, Marion Cobretti, aka Cobra, Sylvester Stallone. Cobra isn’t one to take it easy on a violent perp. And in moments the mad man is stabbed in the chest and unloaded on. Cobra and his partner are what the police force affectionately call “The Zombie Squad”. They’re the guys who take cases no one else wants. The bottom line. 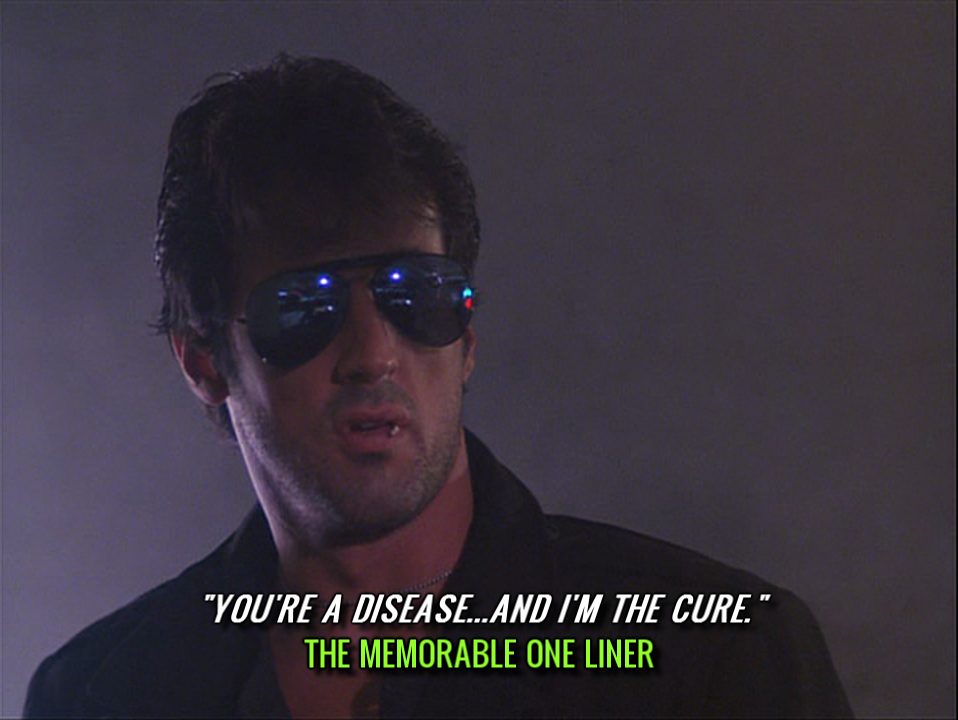 As the crime-scene is being cleaned up and the dead loaded into meat wagons, Cobra is harassed by the media – questioning his often deadly tactics. This is recurring theme of the film. That, and the idea that a revolving door policy keeps criminals on the streets and peaceful citizens in terror.
Aside from this days events, the city has been shaking in it’s boots. There is a serial killer on the lose known as the “Night Slasher”, who has been slashing and stabbing his victims for weeks now. Cobra and his partner Gonzales, Reni Santoni, have been brought in to help find the killer. Maybe their unique brand of gun-slinging detective work are sure to make the case break wide open. 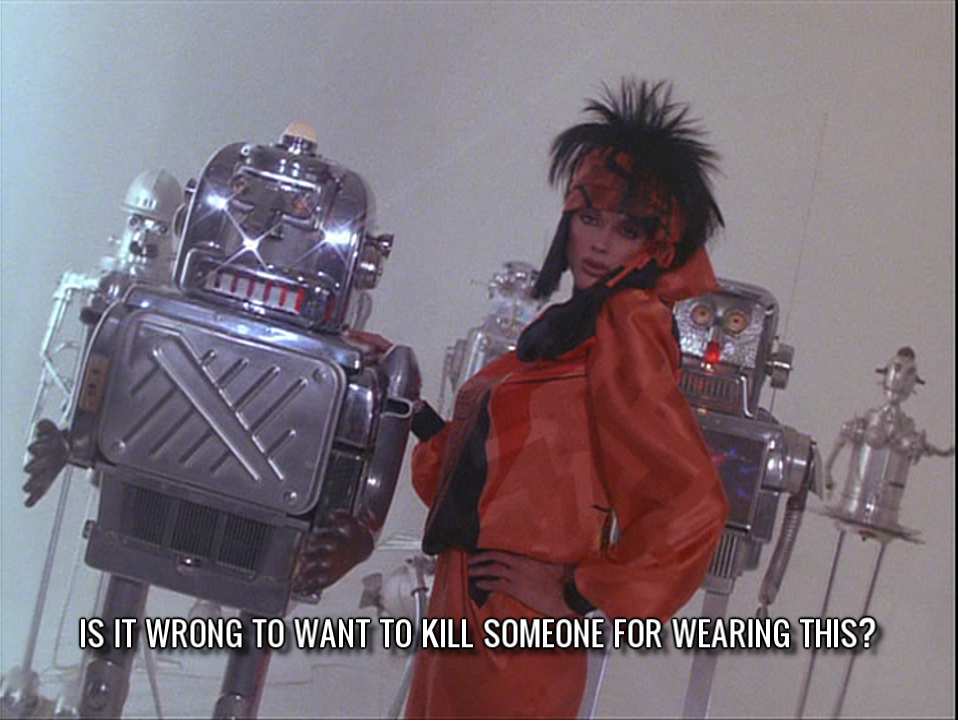 While Cobra and Gonzales hit the streets to rattle some cages, the killer…or killers strike. Late one night as young Ingrid, Brigitte Nielsen, is on her way home from a photo shoot, she witnesses a woman being murdered and gets a clear look at the face of one of the killers. The leader of the group, who is unnamed but we learn is the Night Slasher, Brian Thompson, instructs one of his underlings, who is a cop, to find Ingrid’s identity by using her license plate. This group of killers is a cult, bent on ushering in their order of “The New World”. Whatever the hell that is.
Why is it a cult? Well there are several scenes that show the group of killers in black performing some sort of ceremony held in what looks like a parking garage. They are chanting and clanking axes and other bladed weapons together. It’s no Stone Cutters, but it’ll have to do. Once the Night Slasher and friends learn who Ingrid is they set out to kill her, but she narrowly escapes and reports the attack to the police. This is where Ingrid and Cobra meet, bump uglies and Cobra promises to protect her from the maniac cult.
The Night Stalker uses his police resources to find out who is working on the case and this results in several more attacks on the life of Ingrid, Cobra and Gonzales. One of these attacks involves the Night Slasher going after Ingrid while she’s being looked after at the hospital. A 20 something woman being attacked by a silent stalker with a big knife. Nothing has reminded me more of Halloween 2. Just another reason “Cobra” is getting the “Horror Movie Killers” treatment.
One of these attacks involves the cult converging on our protagonists as a biker gang. This becomes a chase, with Cobra and Ingrid running for their lives. They end up at a near by refinery. After the cult is dispatched, one by one at the hands of Cobra, Cobra and the Night Slasher go head to head. The Night Stalker eggs Cobra on, in typical 80s bad guy fashion and the two throw down in a round of fisticuffs that ends with the Night Stalker being impaled on a giant hook. Cobra operated the hook like a crane and directs the Night Stalker into some sort of industrial furnace until he is no more. 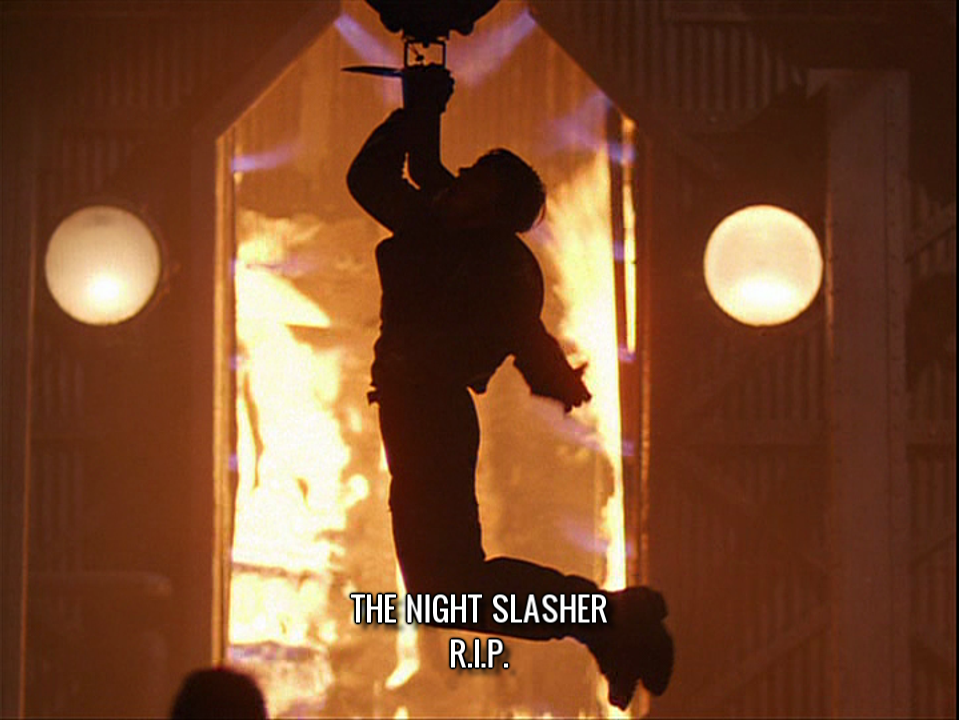 The film ends with Cobra and Ingrid riding off into the sunset on one of the cultists motorcycles. The End.
THE VERDICT
“Cobra” is the spiritual successor to films like “Dirty Hairy”. What both “Cobra” and “Dirty Hairy” share is a cop forced to push the envelope in order to do his job. A cop who struggles against the limitations of the bureaucracy he works for, in a city that is getting more violent every day.
But in this case, “Cobra” is more extreme. Instead of Hairy, who kills to protect himself while protecting  citizens, Cobretti kills because his world is kill or be killed and the citizens just get in the way. Instead of a lone killer, there is an entire cult of killers. And the same it true with the underlying social commentary. The police work of Dirty Hairy is handicapped by scrutinizing reporters, policy makers and the city itself who vilify Hairy for not being politically correct, and of course, using excessive force.
“Cobra” paints a world were criminals are so common, even Granny has to shoot two or three hoods on her way home from bingo. The criminals has banded together in some lose organization, or cult, to further spread murder and mayhem without any clear goal. How someone might take notice of crime getting worse year after year by looking at faceless, nameless statistics. Oh, and there is also excessive force.
Over all, “Cobra” isn’t a terrible movie. Stallone is fine. The action is fine. The underlying message is fine, albeit overly sensationalized in a way that only a mid-80s Reagan voter could concoct, but otherwise fine.
I guess my problem with this movie is it’s villain. Who us this cult? Why is it a cult? Other than general mayhem, what do they want? What is their goal? I understand the idea of crime being looked at as a statistic and how it seems to middle America that the boogey man is around every corner, but this wasn’t developed well enough. I like the idea and maybe it was just lost in translation between the Stallone, the writer, and George Cosmatos, the director.
A much better depiction of America being terrified of itself can be found in “The Purge”, or even better yet “The Purge: Anarchy”. Everyone who has the urge to kill is set lose upon the city to do what they will with little or no explanation as to why they are doing the things they are doing. Just danger around every corner for the protagonist. This is the world that “Cobra” lives in. 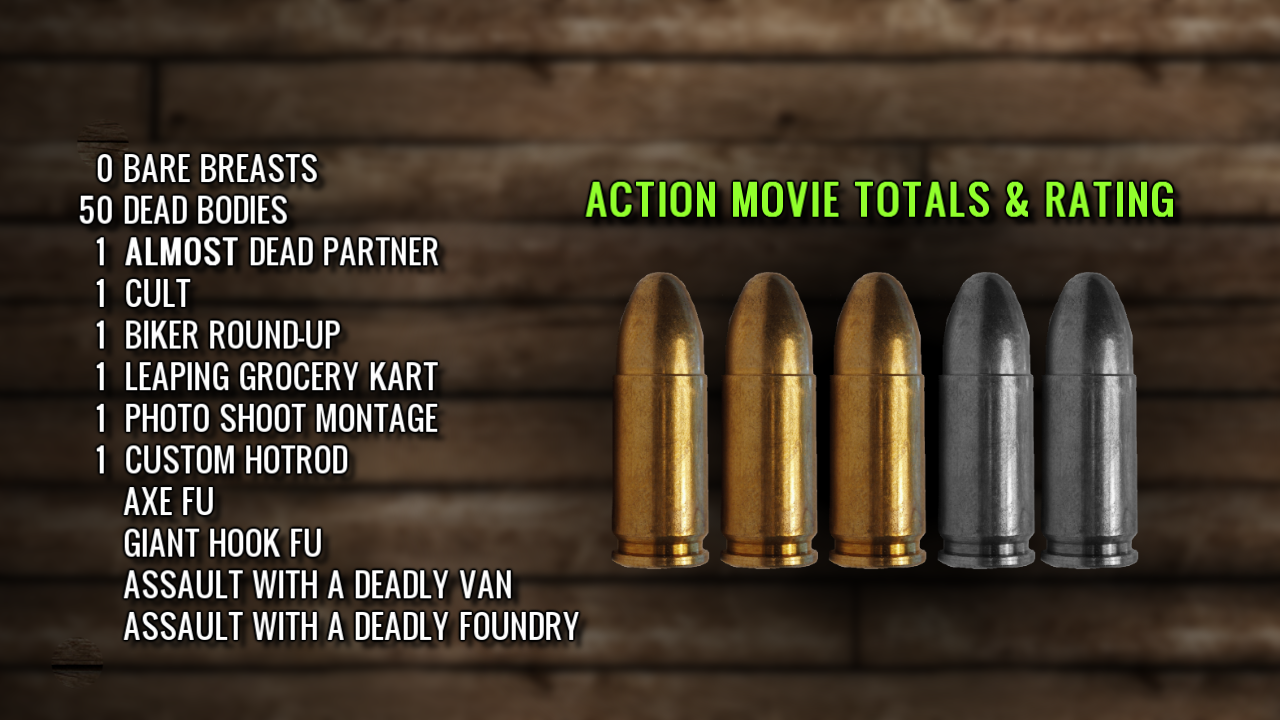 As the 80s continued, action films got more and more bleak and this is a fair example of that. I love how the 80s flicks became filled with doom and dread. “Cobra”s dark nature can be entertaining and watching a lesser known Stallone flick is a lot of fun. But for my money “Dirty Hairy” is the cop for me. Next time, we’ll be paying ol’ Chuck Norris another visit as he kicks the ass of a supernatural killer.
I’m Cory Carr and this concludes another trip on the “Action Movie Time Machine”. Until next time, Semper Fi Punk!
For more from Cory, check out his website slaughterfilm.com, where he and his good friend Forest Taylor record weekly podcasts, reviewing the films that are legendary, even in Hell!