The year is 1982. While the world was dancing to “Pac-Man Fever”, they were also mourning the loss of funny man John Belushi. Legendary rock guitarist Randy Rhodes also passed away, people were better off NOT taking Tylenol for their headache and Chuck Norris continued to roundhouse kick for justice.
THE SKINNY
“Silent Rage” begins with John Kirby, Brian Libby, who is having trouble dealing with the day to day stresses of life. He is renting a room from a single mother who’s adolescent boys constantly run through the house screaming, followed by their mother who exacerbates the situation by yelling at them.
All the noise and the summer heat starts to get the best of John, he starts to experience a psychological episode. John doesn’t think he’s going to be able to control of himself, so he calls his long time shrink, Dr. Halman, for advice which, doesn’t help. 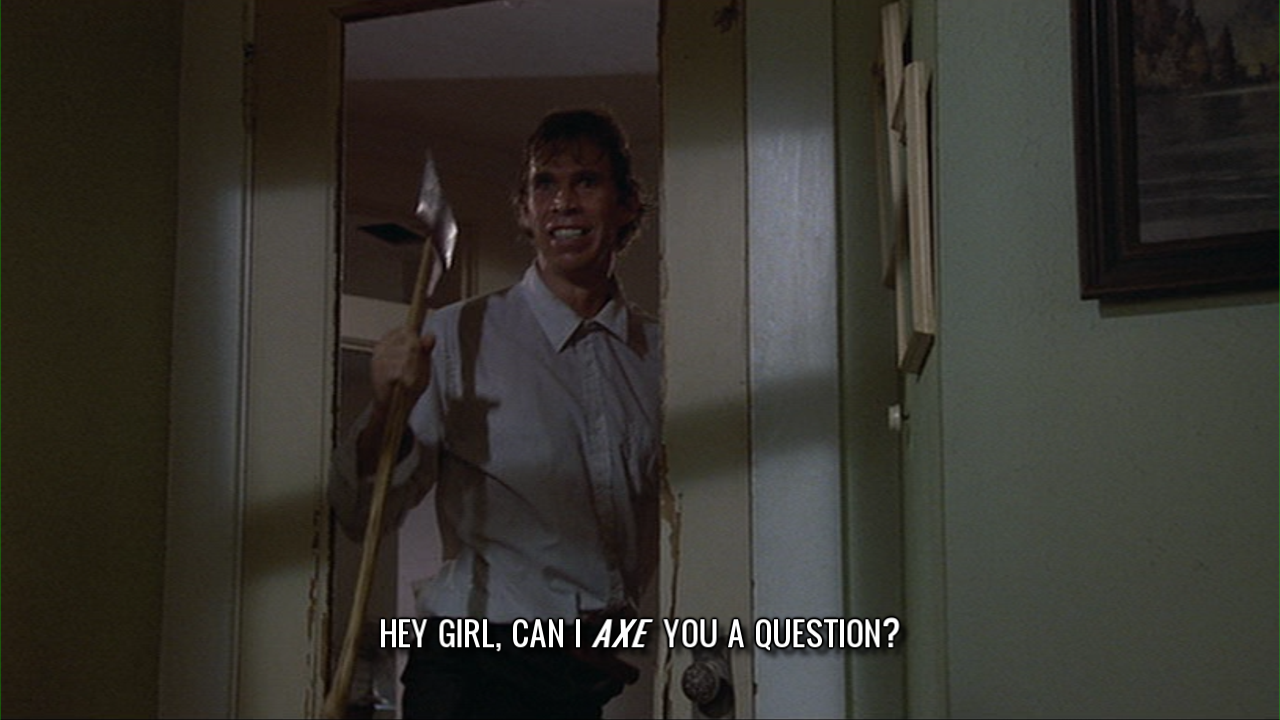 John then does what any sensible, able-bodied grown man would do when their woman and kids start to drive ’em nuts. He goes out to the shed, picks up his axe and starts to work over the family. A nearby mailman hears her screams and calls the police, and soon after Sheriff Dan Stevens, Chuck Norris, arrives with his trusty partner Charlie, Steven Furst.
Everything that happens for the next thirty minutes or so, is completely questionable.
In response to the domestic disturbance involving a woman screaming, Sheriff Stevens begins by slowly walking through the house looking for signs of murder…I guess. Before long the two men cross paths and a fight breaks out that leads from the killer’s home to a near by field. This is where Stevens takes Kirby into custody with the use of Kung-Fu.
Simultaneously, Dr. Halman, Ron Silver, arrives to talk down his patient while Kirby breaks free from his handcuffs. A few other police gun Kirby down and he’s loaded into the meat wagon. 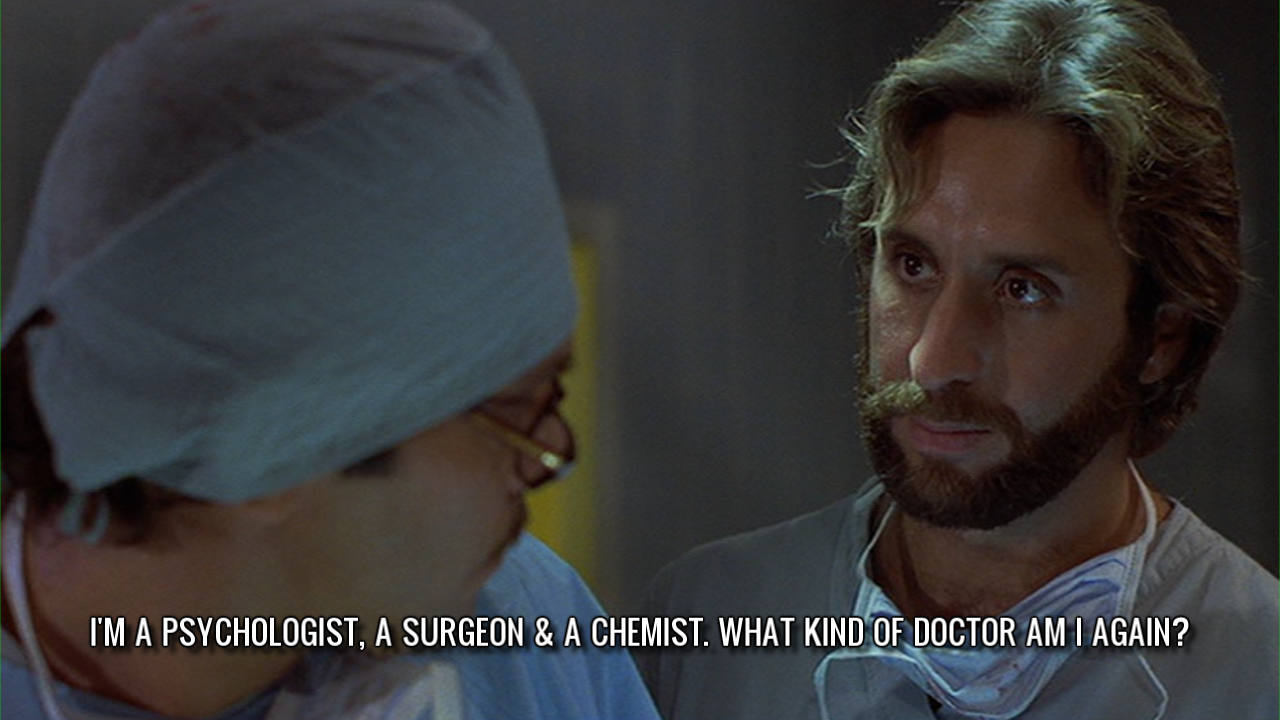 Once at the hospital, doctors try to revive Kirby but are unsuccessful. One of the doctors being Halman. So wait a minute, you mean to tell me that the psychologist is ALSO a surgeon? Who is this guy, House? When all seems lost, Halman’s fellow doctors illegally administer an experimental serum that saves Kirby’s life.
This serum was designed to accelerate a humans ability to heal itself. And there it is. We all know what’s going to happen now. Once the serum is pumping through Kirby’s blood, he becomes nearly indestructible. Every wound his body endures heals in seconds. Kirby is transformed into an unstoppable killing machine with a Wolverine like “Healing Factor”, all in the name of science. 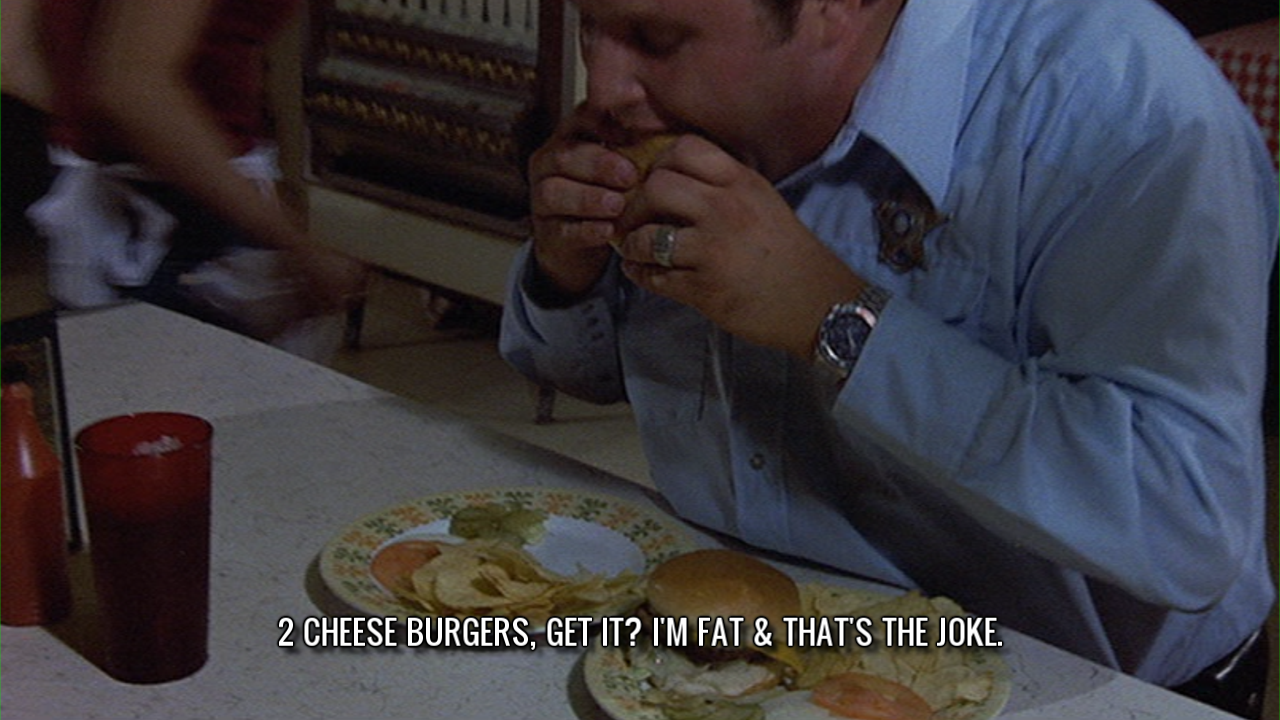 Before Kirby breaks loose and starts to run amok, Stevens and Charlie have a run-in with a gang of hippie-bikers at a local bar. Charlie runs out to call for backup while Stevens contends with the dirty hippies. One by one he chops, punches and kicks the law into them, in one of the more entertaining Chuck Norris fights I’ve seen in resent memory. Nothing over the top for a martial arts action flick, but it’s satisfying.
Meanwhile, from his hospital bead, Kirby overhears Halman telling his partners in science that what they have done to Kirby is unethical and he must be terminated. Kirby, in an act of self-preservation, later pays the kind doctor a visit at his home. Dressed in a gray jumpsuit, with his hair slicked back and brandishing a kitchen knife, Kirby takes on the look and mannerisms of Michael Myers. – Silently stalking his prey with a slashing weapon and is seemingly unable to be killed, “Silent Rage” now becomes a horror movie.
The bodies of Hallman and his wife are found by Halman’s sister, Nancy, who just so happens to be Steven’s girlfriend. An otherwise unimportant fact, until now.
Kirby returns to the hospital and with him comes new that he murdered Hallman. The doctors talk it over and decide that Kirby is too dangerous to keep alive, but when they try to terminate him, he heals and then heads out on a rampage. Kirby kills the doctors, Deputy Charles and a handful of nameless hospital goers before he sets his sights on Nancy for no other reason than she happens to be there. The disturbance attracts the attention of the police and Stevens, who is now out for blood. 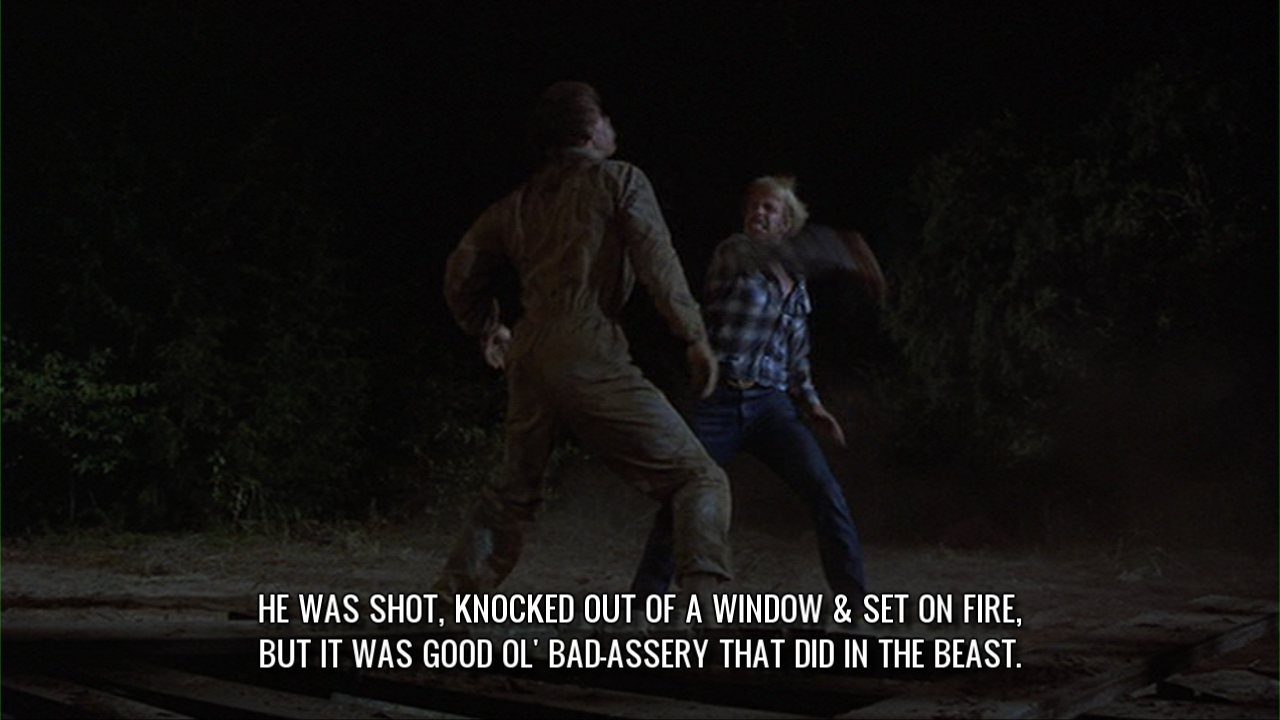 Stevens first unloads on Kirby – knocking him through a window – causing him to fall to what should be his death. Then Stevens and Nancy try to make a getaway but Kirby grabs onto the bumper of his truck. He climbs inside and runs it off a cliff, not before Stevens and Nancy escape. Much like falling through a window onto asphalt, the burning wreckage does nothing to slow Kirby down. “How on Earth can this man be stopped” you ask? Kung Fu! Stevens lets loose a barrage of punches and kicks, allowing him to get the upper hand. Stevens throws Kirby over his shoulder and from there into a well.
So Stevens never ends up killing Kirby, he just relocates him to a watery prison in the middle of nowhere. The End.
THE VERDICT
“Silent Rage” was very much inspired by the newly popular trend in cinema lovingly referred to as the “slasher” film. Yeah, this movie is an odd idea. But inside that idea is a pretty good movie. During the horror scenes there is some descent suspense and during the action scenes I felt myself rooting for Norris to kick some ass. While horror and action should often be pared, the two are balanced well enough here that the final product is one that left me surprised.
“Silent Rage” has it’s moments where the film gets goofy, but over all is a better film than say… “Hero and the Terror“. The script and direction helps draw a better performance out of Chuck Norris while still giving him an opportunity to put his martial arts background to good use. Also Ron Silver is a pretty strong actor and he really adds weight to the film.
Speaking of Ron Silver, he played nearly the same character in this as he did in “The Entity“, released the same year. Instead of an unstoppable killer created by science, “The Entity” had Silver trying to disprove a rapist ghost. Yep, the ghost was raping the protagonist. Believe me, it’s a better movie than it sounds and it’s supposedly based on a true story. 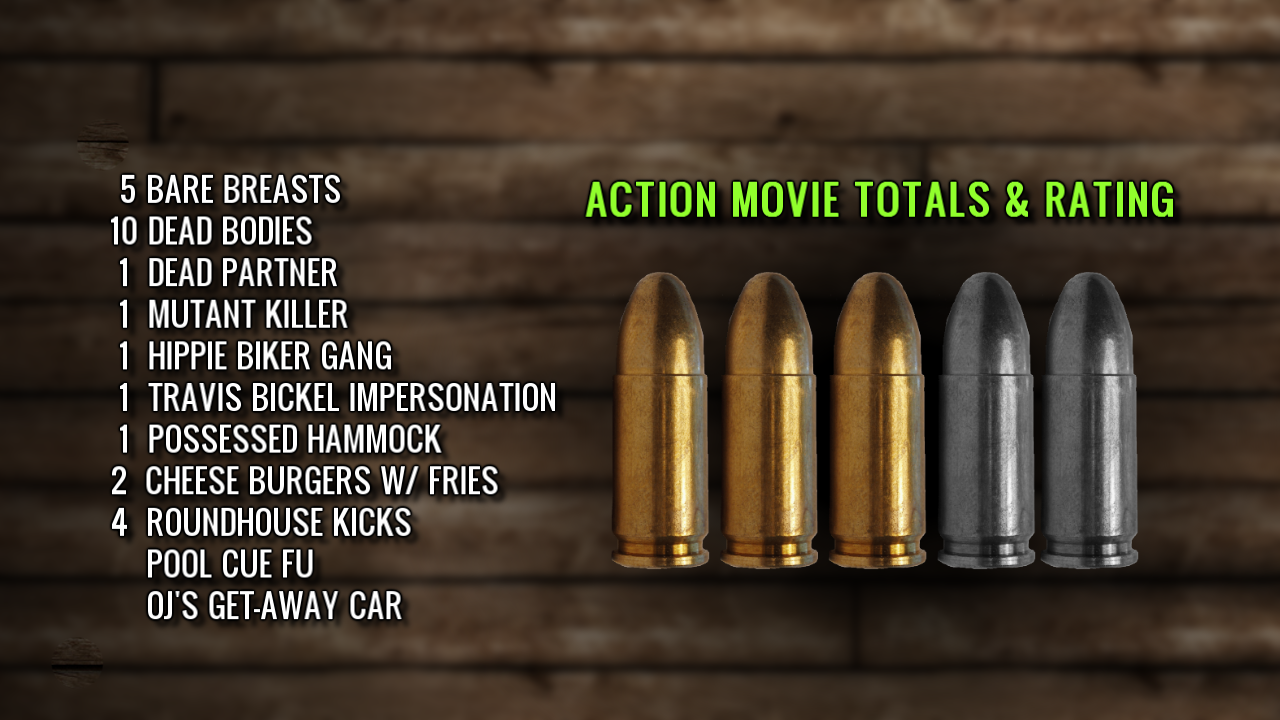 In the end, “Silent Rage” isn’t the best but it’s worth a watch for Norris fans. It was much better than I expected. If you survive the goofiness that is the first thirty or so minutes you’ll be treated to a suspenseful slasher with a roundhouse kicking Chuck Norris. That alone would have sold this movie back in the ‘80s. They should have just put that on the poster…maybe they did…
I’m Cory Carr and this concludes another trip on the “Action Movie Time Machine”. Until next time, Semper Fi Punk!
For more from Cory, check out his website slaughterfilm.com, where he and his good friend Forest Taylor record weekly podcasts, reviewing the films that are legendary, even in Hell!