February has a lot going on. There is Valentines Day, Black History Month, Women In Horror Month, American Hearth Month, as well as about two-dozen other days devoted to nonsense like eating ice cream for breakfast. Also during this minimal month of made-up celebrations is the birthday of notable filmmaker Andy Sidaris. Every February 20th we at Slaughter Film try to sit down and watch a few of his films, Malibu Express being his fist independent feature. Before that Sidaris worked in television mostly, and since, he has developed quite the reputation of making films that showcase some of America’s finest “Bullets, Bombs & Babes”.
The year is 1985. Dairy Queen invents the “Blizzard”, Nintendo give birth to the Mario Brothers, Dr. Herbert West re-animates the dead in “Re-Animator” and Rock Hudson dies of AIDS.
THE SKINNY
Things kick off with Cody Abilene, Darby Hinton, a private investigator who lives on a boat, drives a red DeLorean and carries a .44 Magnum, even though he couldn’t hit the broad side of a barn with it. Cody is a native Texan who has moved to Malibu for work and along the way he has made friends of some pretty colorful characters. Some of which include his boat neighbors May and Faye, a big breasted stock car driver June Khnockers, all three of which are Playboy Playmates and Sexy Sally, a phone sex operator among others. Are you starting to notice a theme here? 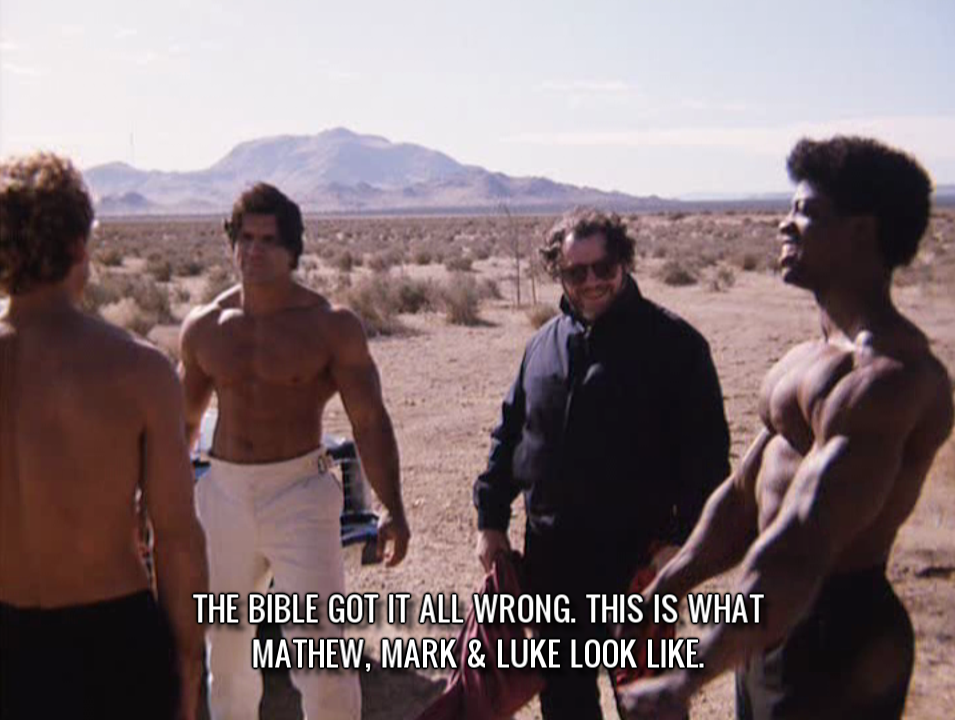 As Cody investigates, he discovers that Lady Chamerlain’s nephew Stuart is secretly a cross dresser who has been sleeping with Sean the butler. Stuart’s wife, Anita, is also sleeping with Sean and so is Stuart’s sister Liza. Sean is an ex-con who owes a loan shark thirty thousand dollars and he also has a nasty habit of secretly recording and photographing the sex he is having with this family. Soon Sean winds up dead and the rest of the film becomes a “who-done-it?” with Sean being the keeper of everyone’s dirty laundry.
While Cody is trying to piece together the murder he manages to sleep with Contessa, his two hot boat neighbors, a local lady officer who Cody brings in for help, some random girl he borrows a car from, and, maybe a few others that I forgot about. I kinda lost count. There is also a sub-plot about a family a backwoods bumpkins who keep challenging Cody to a street race.
Cody finally gets close to the computer smuggling ring when he learns that Liza is good friends with Johnathan Harper, a computer salesman and exporter, and she plans to invest in his business. Cody apprehends Liza and Harper, but not before Harper’s men – Peter, Paul & Luke – try to rub out Cody. 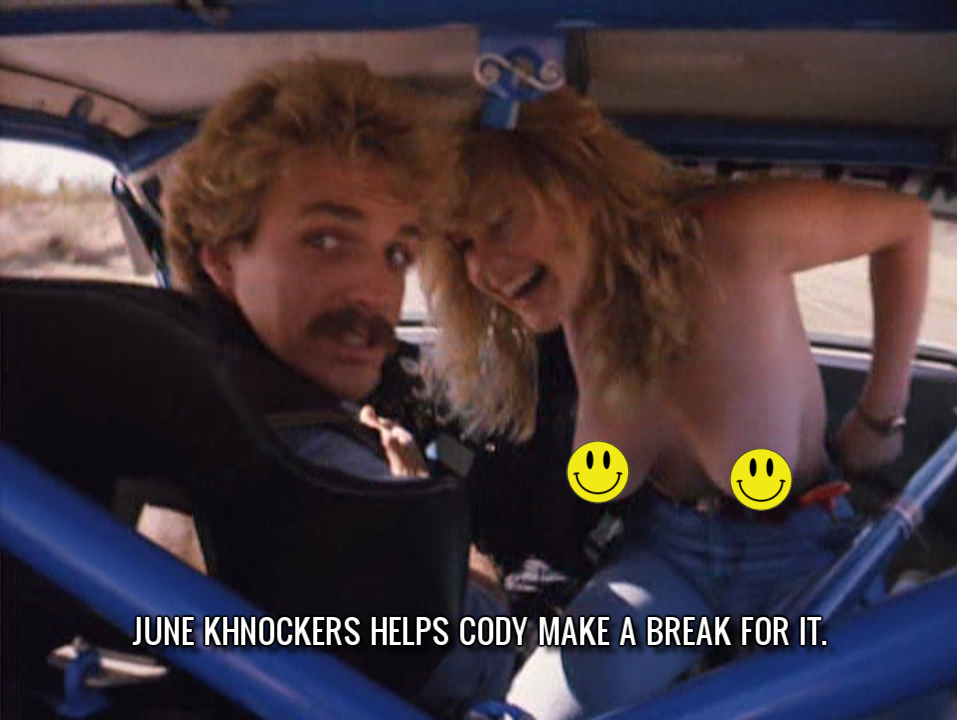 With some quick help from June Khnockers, the stock car driver, she and Cody manage to lose the hired muscle in the desert. 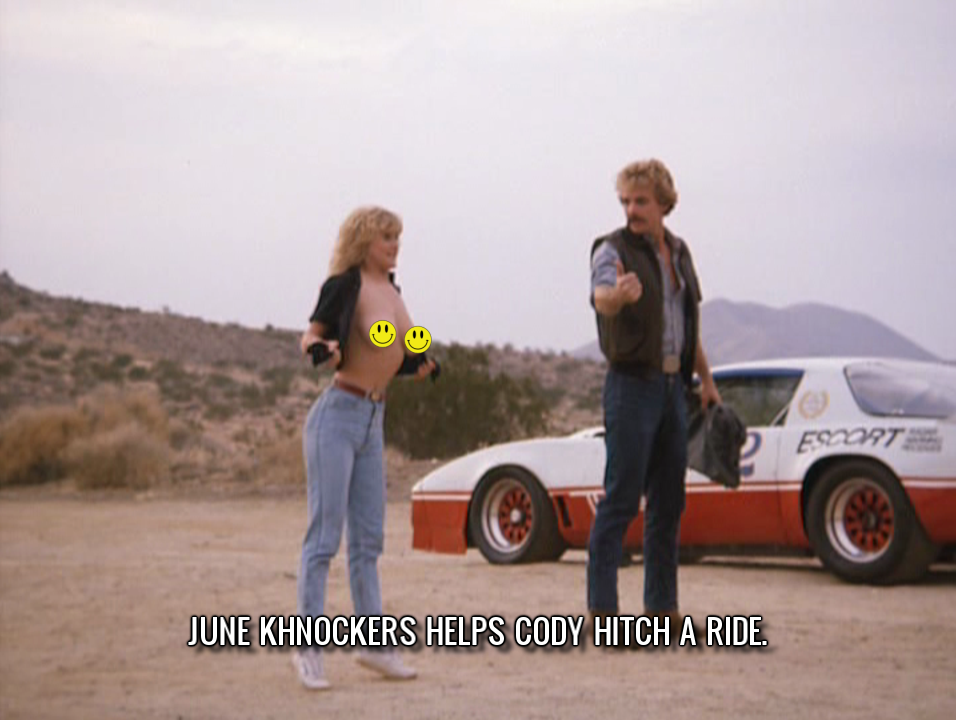 The film ends with Cody throwing a party on his boat – named the “Malibu Express” by the way — to celebrate a job well done. He is accompanied by all the other major players, the various women he plowed and even Liza. Cody then tells them that Contessa wrote him a letter explaining to him that Sean was the person selling the computers to the smugglers and that she was the one who murdered him. She then planted evidence to frame Liza and even wore a mask to look like Liza when she did it. While Cody was perusing Sean’s killer, Contessa would be able to freely escape the country and no one would be the wiser that his death was an assassination. 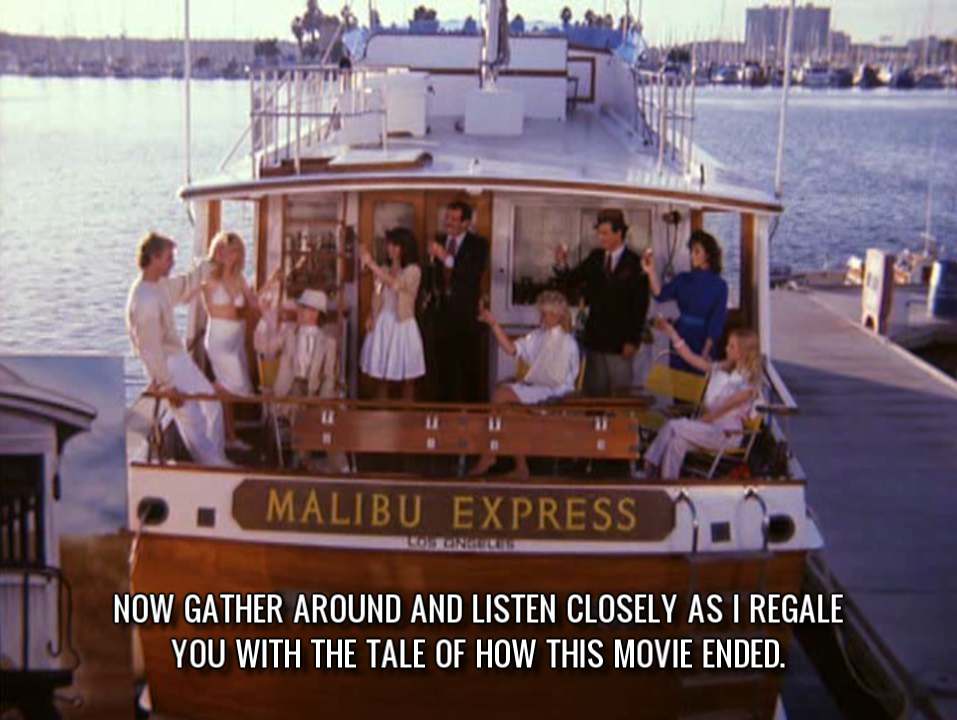 The problem with this explanation is that Cody just told everyone, so all the cloak and dagger was for nothing. I assume what happens next is that the party turns into a giant boat orgy. The End.
THE VERDICT
“Malibu Express” isn’t one of Andy’s best. I attribute this to it being the first he both wrote and directed. It seems like he didn’t know if he wanted to make a spy movie, a murder mystery, a sex comedy or rip off “Smokey & the Bandit”. The action falls flat, as does the comedy and most of the plot. There are so many characters involved that it’s easy to forget who is doing what or why I should even care. The film starts with the notion that Soviet Russians are stealing computer secrets and by the end of the film the Russians have been brought up once, maybe. Not to mention the terrible ending where everything literally needs to be explained to the audience. In the medium of cinema, you mustn’t tell the audience what happened. You have to show them.
There is also a strange amount of jokes made at the expense of homosexuals. And not just characters in the film, but homosexuals in general. Not sure why these jokes were an important to the film but they stood out like a sore thumb.
The only thing that works in this movie, I’m sorry to say, are the topless women. Who am I kidding, I’m not sorry. These women are amazing!
The Playmates and the porn-stars in “Malibu Express” were all filmed during a time when breast implants weren’t yet popular, like they became in the ’90s, and before the terrible fashion sense of the later ’80s had taken hold. To compare these women to those of  the “Friday the 13th” franchise, they most resemble the women from the first four films. Happy-go-lucky, naturally cute, girl next good types. Where in the later “Friday” films the women were all big hair, terrible fashion and became generic unlikeable character types.
These women all had a great attitude and were not only fun to watch, but they seemed like they were having fun during the making of the film. Especially Lynda Wiesmeier, aka June Khnockers. 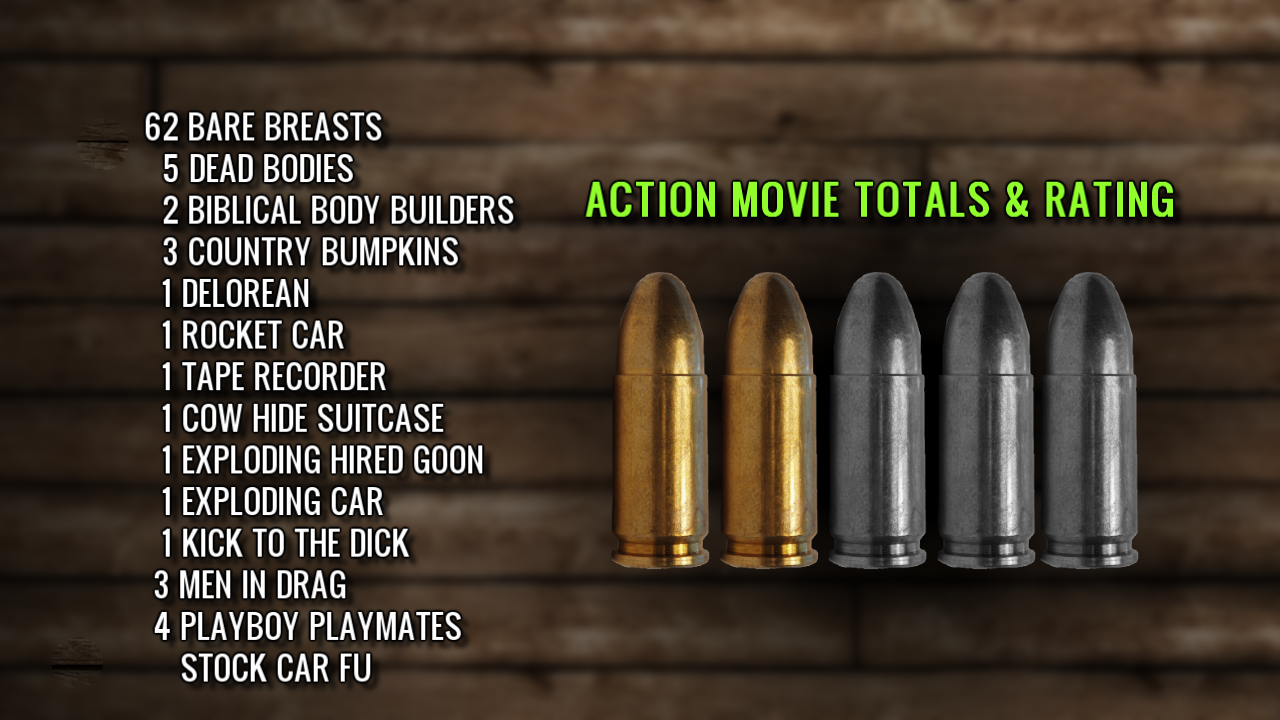 So in the end, we all learned that Andy Sidaris likes to make action movies that are teeming with titties and I learned, that I like that… If you’re interested in other boobie-action movies, check out my review of “The Lost Empire” by Jim Wynorski.
I’m Cory Carr and this concludes another trip on the “Action Movie Time Machine”. Until next time, Semper Fi Punk!
For more from Cory, check out his website slaughterfilm.com, where he and his good friend Forest Taylor record weekly podcasts, reviewing the films that are legendary, even in Hell!

The House of the Devil