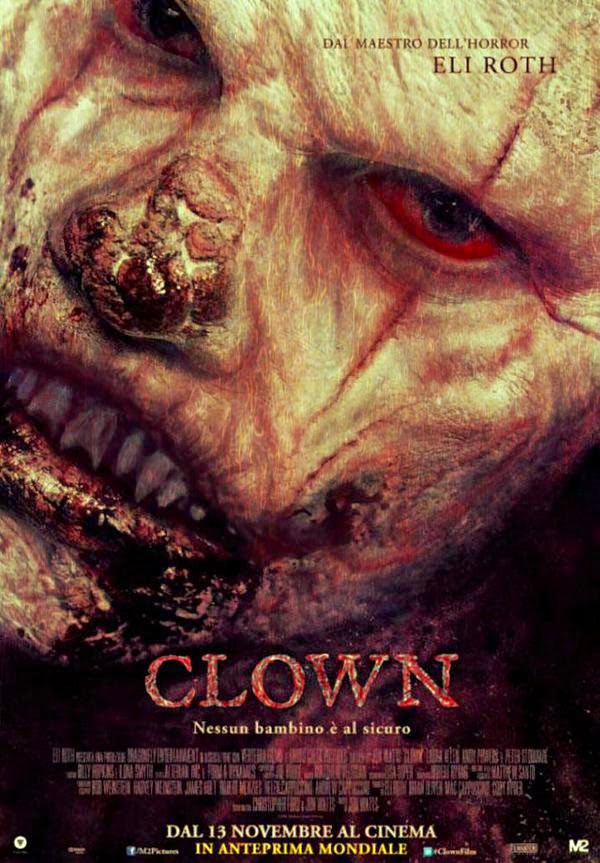 Say what you want about Eli Roth, but just when you think he’s disappeared into obscurity, he always finds a way back into a cinephile’s consciousnesses. Sure, he’s not the best filmmaker, and not even the best horror filmmaker, but for some reason when I see his name attached to a project I feel compelled to watch. With that being said, this brings me to Eli Roth Presents (?) “Clown.” While not a great film, there are still some really cool ideas in the film and adds to the myths we all know and probably fear from our childhoods, if you are, in fact, scared of clowns.

Our tales begins with kids at a birthday party eagerly awaiting the arrival of a clown. Loving mother Meg receives a call shortly after that the clown they are waiting for has been double-booked and can’t make the party. Meg calls her realtor husband, Kent, and delivers the bad news, but Kent has other plans. Fortune smiles upon Kent when he finds an old clown suit in a chest…hidden away of course. The party goes off without a hitch, and Dummo the Clown is the hero of the day. Things begin to get weird when Kent can’t remove the costume, wig, or clown nose. Things gets even weirder when he meets Karlsson, played by resident Swedish weirdo Peter Stormare. Needless to say, Kent is cursed to wear the suit until he takes the lives of five children as he slowly turns into something that isn’t quite human.

The fear of clowns trope has been one of horror’s go to tropes for years. You can go to “Stephen King’s It” for the best example of the evil clown. Personally, my first experience with clowns was “Killer Klowns From Outer Space” which is a goofier and more light-hearted take on the evil clown. “Clown” is far more earnest than “Killer Klowns” not to mention several other recent clown films that pretty much make the killer a clown, or clown-like being, that uses goofy ways to dispatch their quarry.

What sets this film apart from other films of it’s ilk, is, again, its earnestness. It doesn’t try to be goofy just to be goofy, it’s actually a very nicely paced horror film that takes the creepiness of clowns and creates an interesting mythic story. Essentially this clown is Pennywise from “It” if you took away all the humor and replaced it with gore and horror. The biggest gripe that I have, however, is the third act, which pretty much falls into the typical “killer in the house” cliché. There is also the occasional use of CG blood, which always sticks in my craw, but its used sparingly enough to be tolerable.

One of the highlights of the film is one scene specifically that is few reminiscent of “Alien.” It takes place in the plastic tunnels of a Chuck E Cheese playground and provides a great deal of suspense. Another aspect of the film that might be overlooked is the sound design and score. The stomach rumblings of Kent throughout the film are very unnerving, and the score by Matt Veligdan sounds like a re-purposed John Harrison score, but it’s subtle and adds to the tension.

All in all, “Clown” is a fun watch, but it isn’t perfect. It suffers from some overused horror tropes and it gets dragged down in its own ridiculousness at times, but its a good take on the killer clown genre that doesn’t rely on “a vengeful ghost or deranged-mental-patient-in-a-clown-suit.”

Fun Fact: One of the earliest ideas of the “evil clown” comes from “Hop-Frog” a short story written by Edgar Allen Poe in 1849.

Rant Corner (Ep.2) – “Animal Instincts” or: You know that day when you have to take the keys away from the grandparents, we’re looking at you DC.