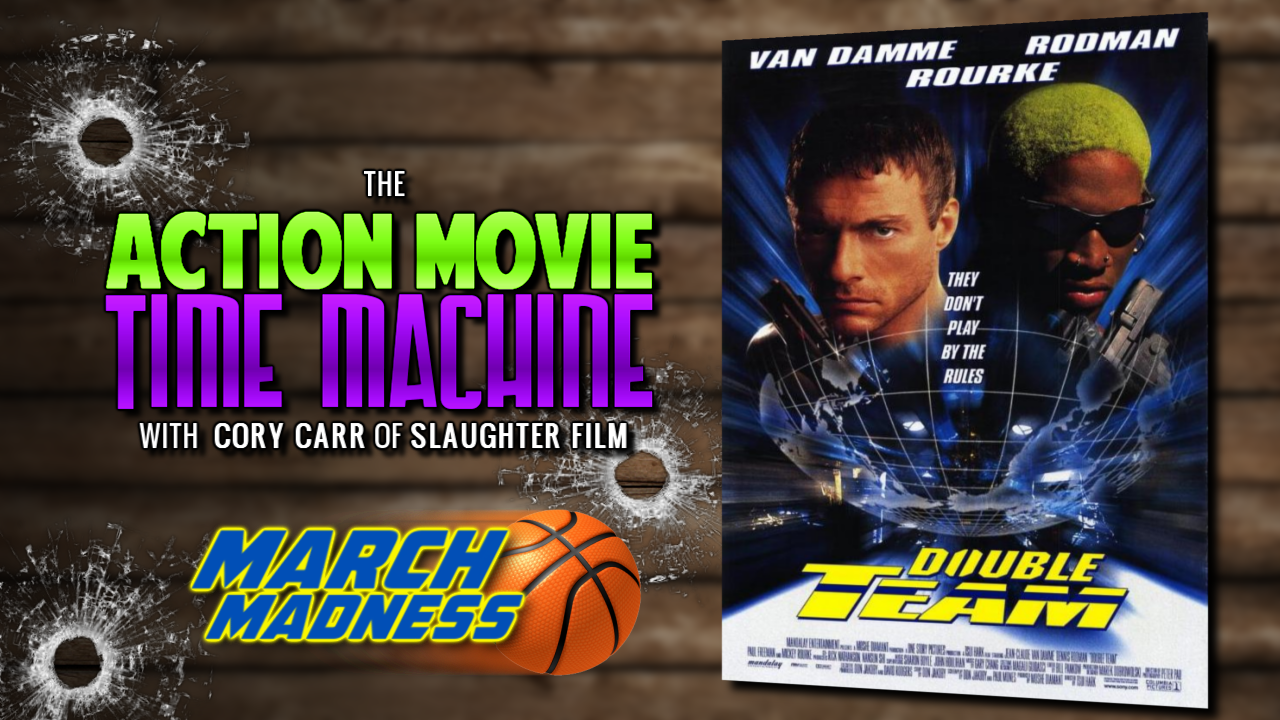 Well it’s March, and with it comes March Madness. To honor the basketball gods, we will be loading up the “Action Movie Time Machine” with the dial set to the decedent year of 1997 to visit Dennis Rodman, before he became the American ambassador to North Korea.
The year is 1997. Howard Stern showed everyone his “Private Parts”, police investigate the murder of the Notorious B.I.G., and the Bundy family say goodbye as “Married With Children” comes to an end. All this, and someone thought it was a good idea to put NBA star Dennis Rodman in “Double Team”.
THE SKINNY
Jack Quinn, Jean-Claude Van Damme, is a special forces spy type who has recently retired so he can be with his wife when she gives birth to their first child. His retirement plans get cut short as he is sent out on one last mission to apprehend an international terrorist for hire who goes by the name Stavros, Mickey Rourke. Quinn has spent years trying to capture Stavros, so naturally, when Stavros comes out of hiding, Quinn is just the man for the job. 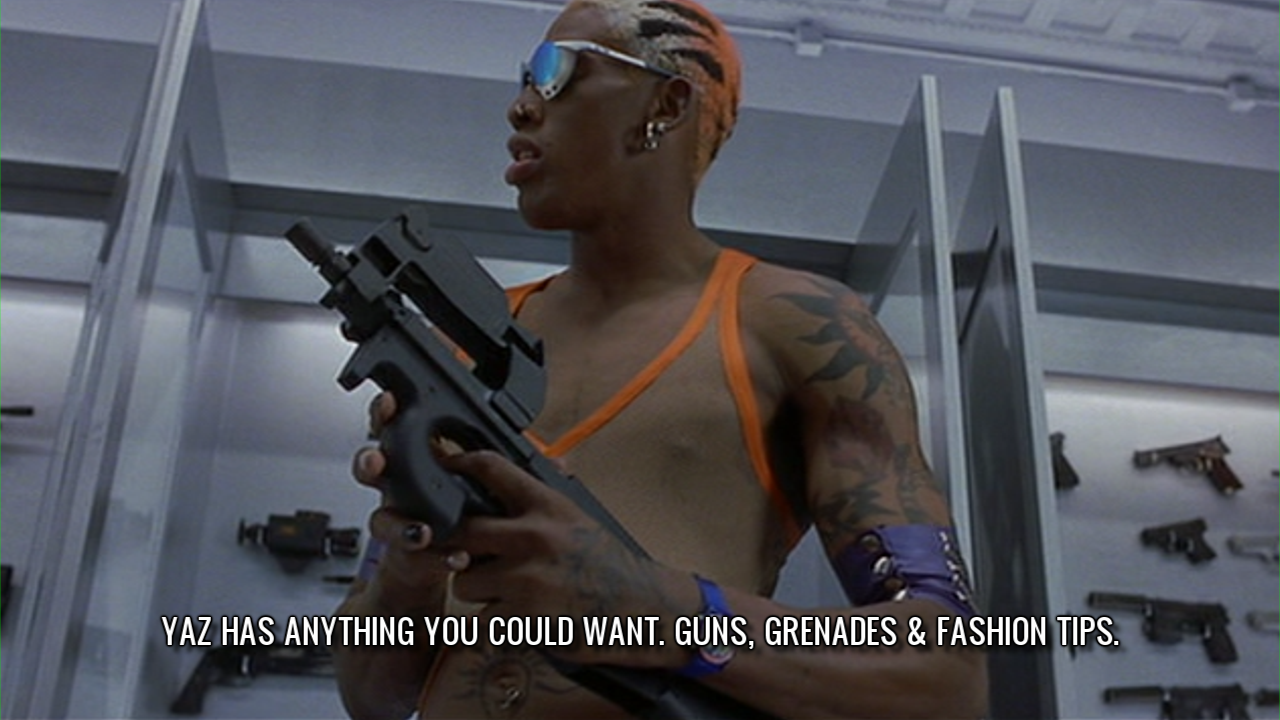 Quinn is sent to lead a Delta team in the capture of Stavros, but first we have to introduce the elephant in the room. Quinn visits the gay-bar district of town to meet up with his contact, Yaz, Dennis Rodman. Yaz, is interesting. He…well, is dressed like Dennis Rodman. Dennis Rodman is more or less playing himself in this movie. In fact, Dennis Rodman is playing Dennis Rodman pretending to be an underground arms dealer who has recently decided to work exclusively with the “good guys”. This scene isn’t so important. It simply introduces his character so we’re familiar with him later.
So, Quinn buys some weapons, that apparently the Delta Team can’t get their hands on, and he and the Deltas head after Stavros.
Their intelligence says that Stavros will be visiting a Dutch amusement park. The Delta team show up early and set up a sting operation complete with a tranquilizing sniper who will take Stavros alive. When he arrives, Quinn wonders why he would bother with an amusement park? Is he planning a terrorist attack? Well it turns out that he was visiting his son.
Soon the Deltas are discovered, a shoot out begins and Stavros’ son is shot in the cross fire. Quinn chases Stavros on foot and is lead to a nearby hospital where they fight it out in the nursery. Stavros manages to escape when he  throws a grenade at Quinn. Quinn opts for saving the children and this allows Stavros to go free. 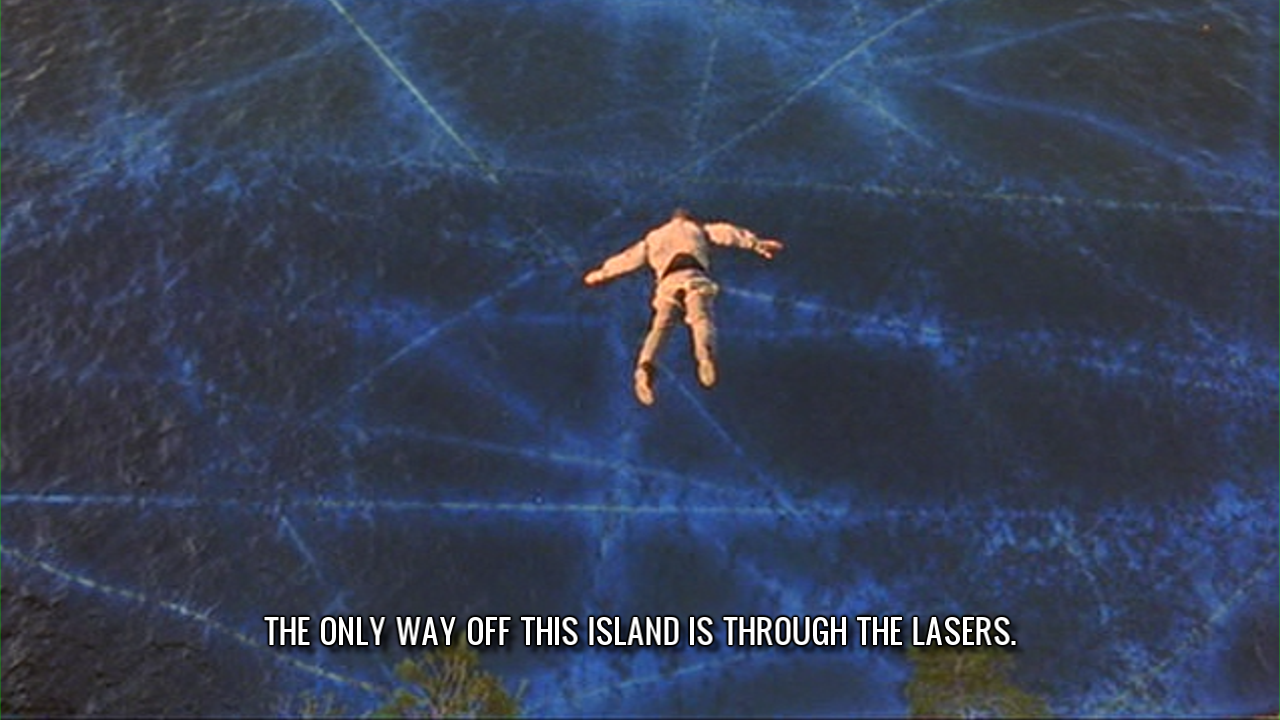 When Quinn wakes up from the explosion he finds himself on a remote island as the newest member of “The Colony”. The Colony is where special agents go when why are no longer effective. They are too dangerous to be set free and too valuable to kill. Instead they are gathered together to analyze data and help world governments capture terrorists and fight rogue nations. This idea is a 100% rip-off of a ’60s British television series called The Prisoner.
After a few days and two training montages, Quinn fights his way off the island and swims through laser infested waters before being picked up by a cargo plane that Quinn climbs into in mid-air. Once on the ground, he recruits the help of Yaz who offers to take him to see his wife – who thought Quinn was dead. I don’t know why they didn’t just drive, but Quinn and Yaz parachute into Quinn’s backyard inside an invention Yaz came up with himself. It’s a giant air filled globe the encases the person wearing it, allowing them to safely float down to the surface of the Earth…It’s a fuckin’ basketball! 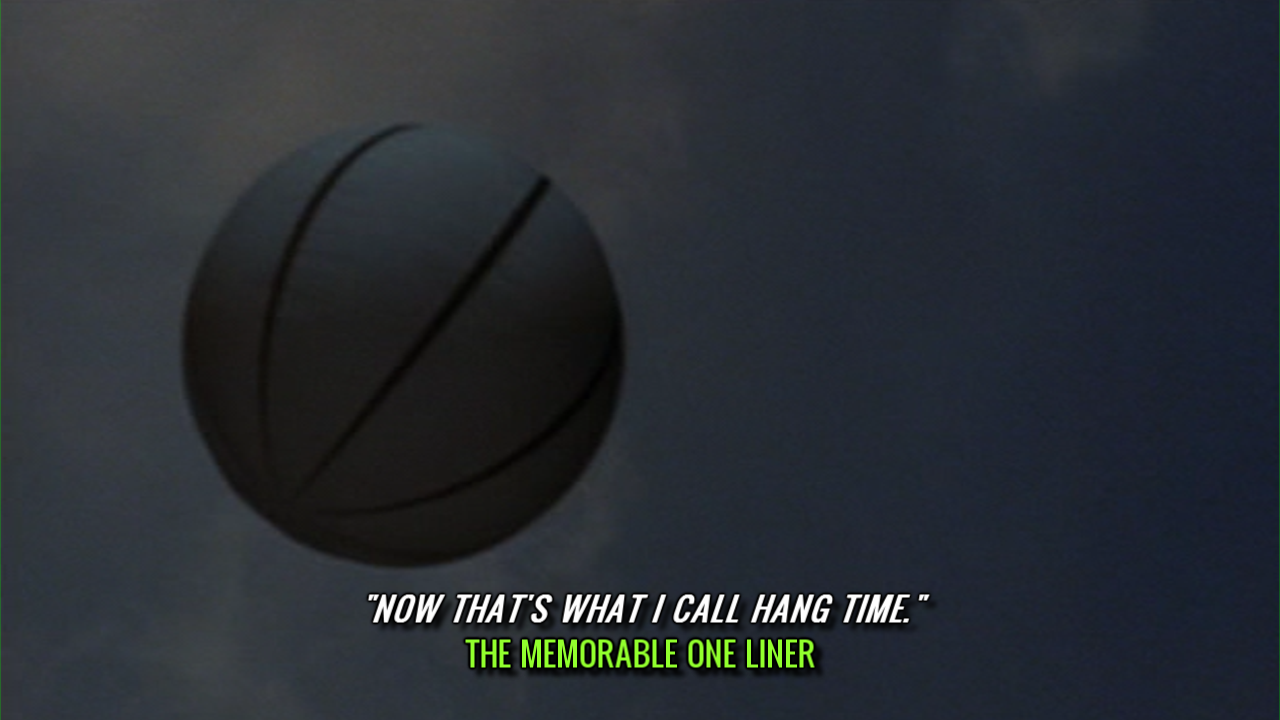 Anyhow, once Quinn arrives at his house, he discovers that it’s a trap set by Stavros. Stavros has kidnapped Quinn’s pregnant wife and is planning to take the child for himself to replace the one killed in the shoot out. Yeah, that’ll teach Quinn!
Quinn and Yaz follow the Stavros trail to Italy where Yaz uses his monk connections to zero in on him. “Monk connections”, you ask? Yep, apparently a while back Yaz built the monk’s some “main frame processor” complete with a dial-up connection to the world wide web. The “cyber-monks” are grateful and most eager to repay Yaz.
The monks help Quinn locate his wife, who is at a hospital giving birth. By the time Quinn arrives, the baby has been hatched and Stavros is gone. Fortunately one of the nurses knows his plans. 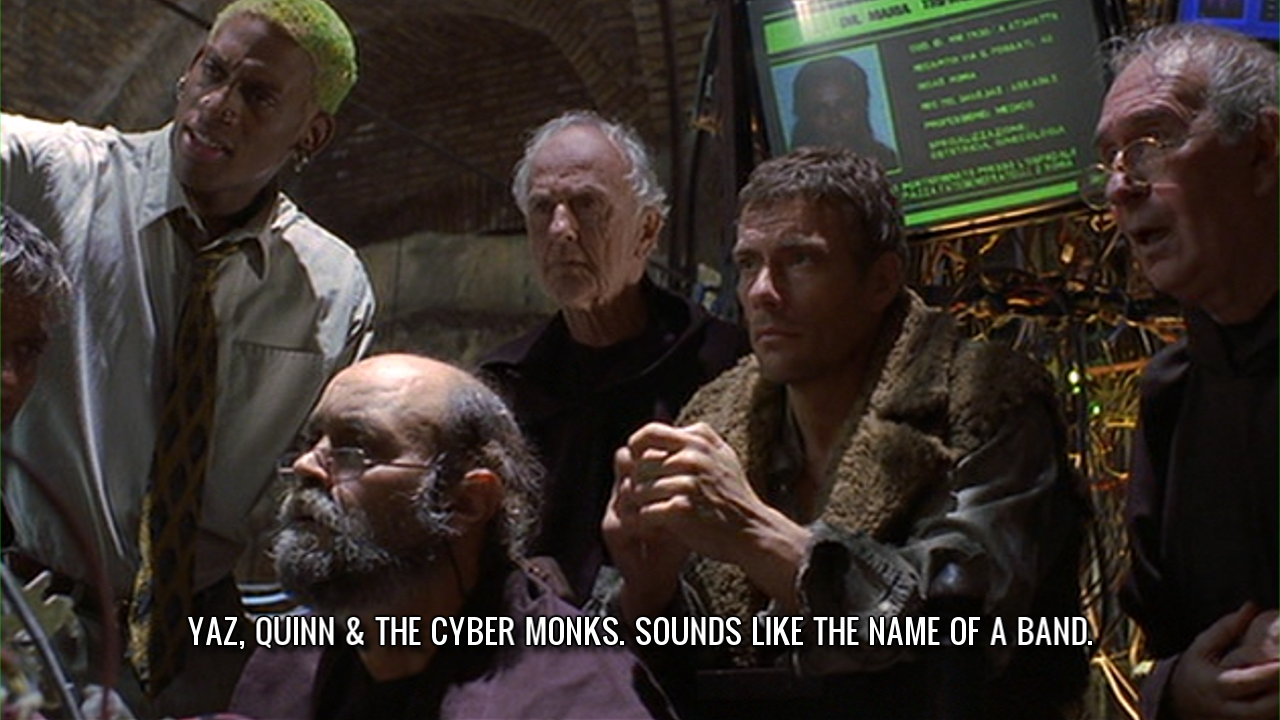 Quinn follows Stavros to the Coliseum where he and Yaz must fight through Stavros’ goons before Quinn and Stavros fight it out surrounded by land mines. If that wasn’t enough, Stavros brought along a bangle tiger. Stavros sure knows how to party.
Yaz saves the baby while Quinn and  Stavros battle – which is a pretty decent fight sequence. Everything ends when Stavros steps on one of his own land mines – blowing up both himself, the tiger and the entire arena…for some reason. When all is said and done, Quinn rides off into the night with his newborn son. The End.
THE VERDICT
I feel like “Double Team” was the precursor to “Rush Hour”. I might be giving “Double Team” more credit than it deserves but each film shares quite a bit with the other. They each team-up a martial marts master with a wisecracking black man… Okay, that the only similarity. But “Double Team” did come out over a year before “Rush Hour”. And if movies like “Deep Impact” & “Armageddon”, “Dante’s Peak” & “Volcano”, and “White House Down” & “Olympus Has Fallen” are any indication that studios are totally willing to rip of each others idea while are still being developed, I’m sure the same could be said about “Double Team” & “Rush Hour”.
“Double Team” is kind of…bad. But there is good to be found within it. Like Van Damme’s fighting…and splits. There are many of the action sequences that are well filmed and turn out to be pretty entertaining. My problems with the film is also the action sequences. While they are entertaining, they are designed to be so over the top that I can’t take them seriously. They are so overly complicated that they stop making sense. These problems really show the films age, as everything in the ’90s had to be the most extreme at all costs. Example; The final showdown that results in a hand to hand fight to the death…in the Coliseum…surrounded by land mines…and there’s a tiger. Are you fucking kidding me?! Rodman is another problem. So naturally, to help sell the film the studio wanted an interesting celebrity. He dressed outlandish and fooled around with Pamela Anderson and this made him famous.  And now we have a sub-par action flick that’s full of his strange outfits and colorful hair-dos. His popularity was a bit of a passing fad, and again, this movie shows it’s age. Oh, and everything Rodman says becomes a cheesy basketball related one-liner.
My REAL problem with this movie is it’s story telling. There is no attention to detail and no effort to develop the characters. Van Damme’s character is a special forces spy type, but who does he work for? Why does Rodman’s character so chummy with Italian monks and why do the monks have the internet? I could go on asking these dumb questions but I won’t bother. It seemed like the writers had a hand full of “awesome” ideas and had to find a way to get them all to fit together without wasting too much time on explaining anything. 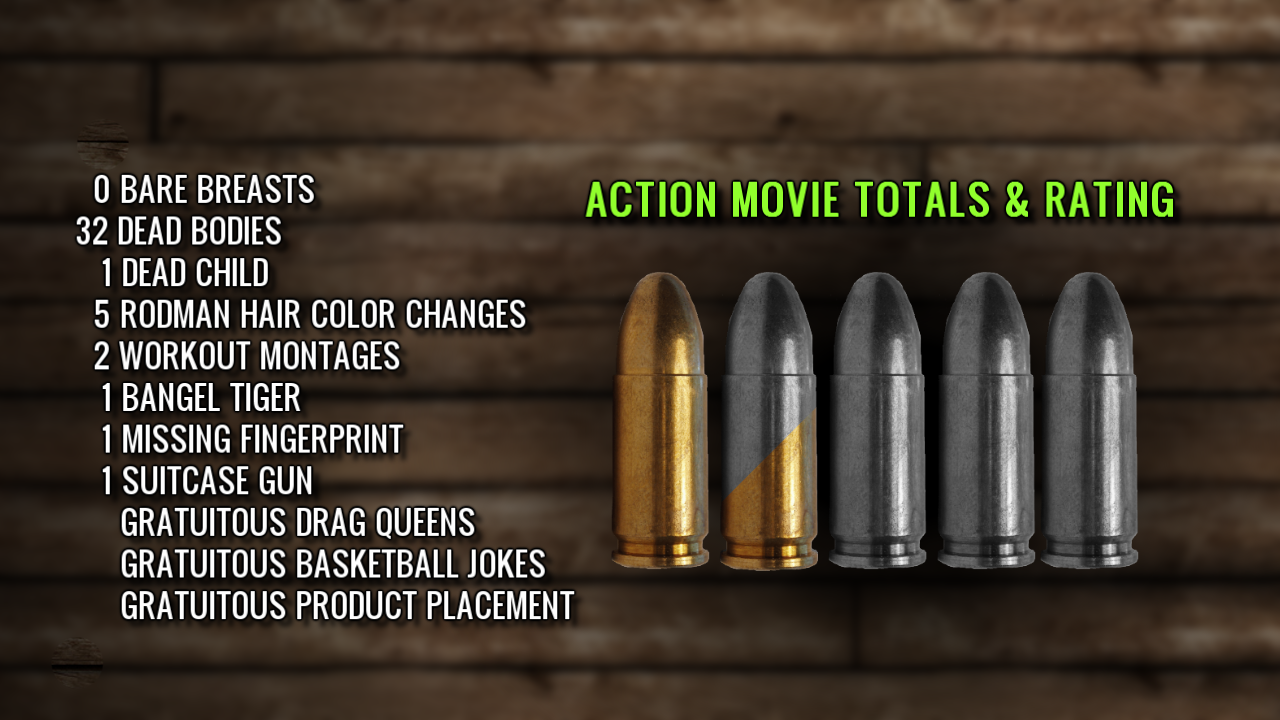 In the end, the core of this movie is interesting; how the spies have a lose network they belong to and when the “retire” they go to The Colony – but everything else is gimmicky crap.
I’m Cory Carr and this concludes another trip on the “Action Movie Time Machine”. Until next time, Semper Fi Punk!
For more from Cory, check out his website slaughterfilm.com, where he and his good friend Forest Taylor record weekly podcasts, reviewing the films that are legendary, even in Hell!

Rant Corner (Ep.4) – Drunk Edition – “Arrow S3 and Hiatuses” or: Shut up Laurel Lance! Shut that Piehole or I’ll shut it for you!