Tonight Big Time in Hollywood, FL Premieres (March 25 at 10:30/9:30c) on Comedy Central and it’s simply Brilliant.
Why is it Brilliant? Because it had me laughing the whole time. “Laughing” is something I have been dying to experience for awhile now. Every Comedy show that premieres seems to loss its steam after awhile (I’m betting with Stiller this won’t). There hasn’t been a film that has come out that I honestly laughed throughout the entire run-time.
Comedy has been pretty dead on both TV and Film.

Fast forward to when I laid my eyes on Big Time In Hollywood, FL. The other night I was on YouTube watching my subscriptions. An ad from Comedy Central pops up before a video and its the complete first episode of Big Time. I was about to skip it but it kept me drawn in. This was a 20 minute ad and I sat through the whole thing with a skip button to my right. I did not skip. Instead the crazy idea of two brothers who love film making kept my eyes fixated to the screen. It’s stupid fun, fun in which I haven’t had in awhile. For me Comedy Central is a channel I usually have on. But my normal CC shows have been disappearing. Only show left on CC that I look forward to watching is South Park.
Well not anymore.
Hollywood, FL is a show that I will be watching.
From IMDB: Big Time In Hollywood, FL Follows two delusional brothers, who are self-proclaimed filmmakers, as they are kicked out of their parent’s house and end up on an epic cinematic journey. 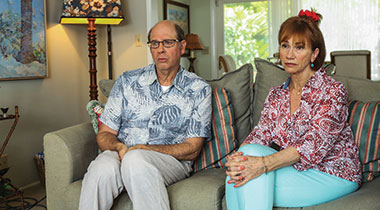 A cast that includes Ben Stiller (also Producer), Stephen Tobolowsky, Kathy Baker and Keith David already have my attention. But the premise holds me even more. Alex Anfanger and Lenny Jacobson are funny. Their dimwit is just perfect. Usually I find dimwit to be annoying, It can ruin the experience (Penny from Dumber and Dumber To). But I honestly feel this will work. With Ben Stiller I have no doubts.
I don’t want to waste your time with my horrible writing, instead watch the episode tonight or below.
Please give it a watch!

Late-to-the-party Matt: Who are these chicks?