Sorry “Batman V Superman” you lose again. Sure, it’s over a year until your film is released, but there is only so much dick teasing people can take before they are going to forget about you and move on to the next best thing; and that “next best thing” is obvious; the unveiling of the newest “Star Wars: The Force Awakens” trailer, and awakens is a perfect term for this; it awoke my inner child, and while I’m still a huge cynic, which so many people can attest to, and I’ll still troll to get a rise out of people, that doesn’t take away the fact that next to this year’s “Mad Max: Fury Road” this Jew can’t wait for this Hanukkah gift come Christmas.

Moving on from fan boying, which I really hate to do, the real purpose of this article is to point out some of the more obvious, and maybe one not so obvious thing from this newest trailer, which you can check out right HERE. So here we go:

One of the main things that we learned today is that the desert planet that we thought was Tatooine, is in fact the desert planet of Jakku. Will Tatooine still make an appearance somewhere in this film, or the other two films in this newest trilogy, I’m sure. 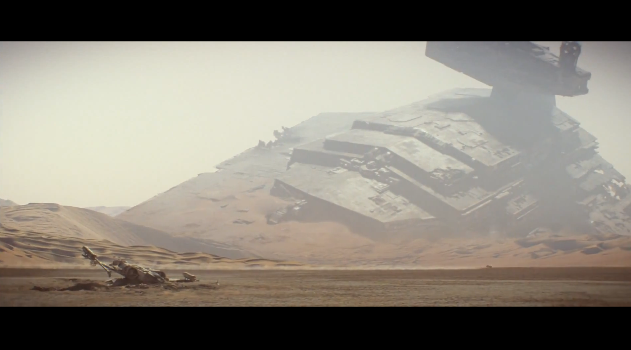 As you can see from the picture above we have both a downed X-Wing and a downed Star Destroyer. What we don’t know is when and where this takes place. As we know the Rebellion took place all over the galaxy and there are likely downed ships on every planet. Is this Jakku, Tatooine, or some other unnamed desert planet we don’t know about yet? 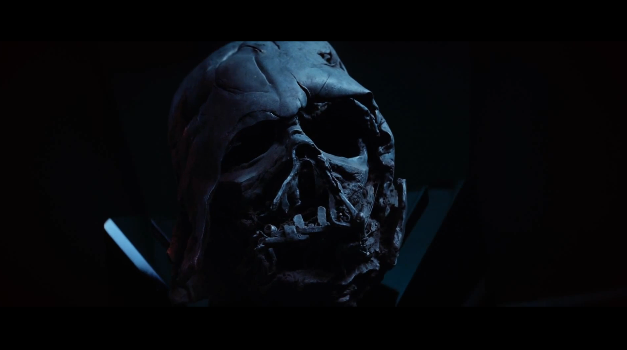 We also get our first look at charred remains of Darth Vader’s helmet above. The last we saw of this helmet was during the funeral pyre scene on Endor in “Return of the Jedi.” Was Vader’s helmet found by someone, is it being used in some sort of propaganda by the newly re-formed Galactic Empire, or is it in some sort of war museum. 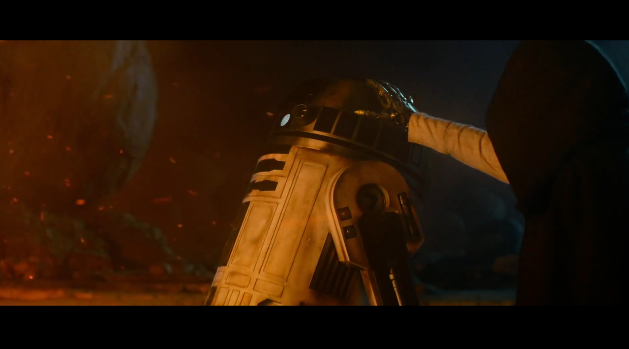 Next we see our old friend R2-D2, and a metal hand. Conventional wisdom would say this is obviously Luke Skywalker seeing his old friend again. As we know, JJ Abrams likes to play with people’s heads, so could this be a misguide. I’m sure a lot of people lost hands and arms during the Rebellion. 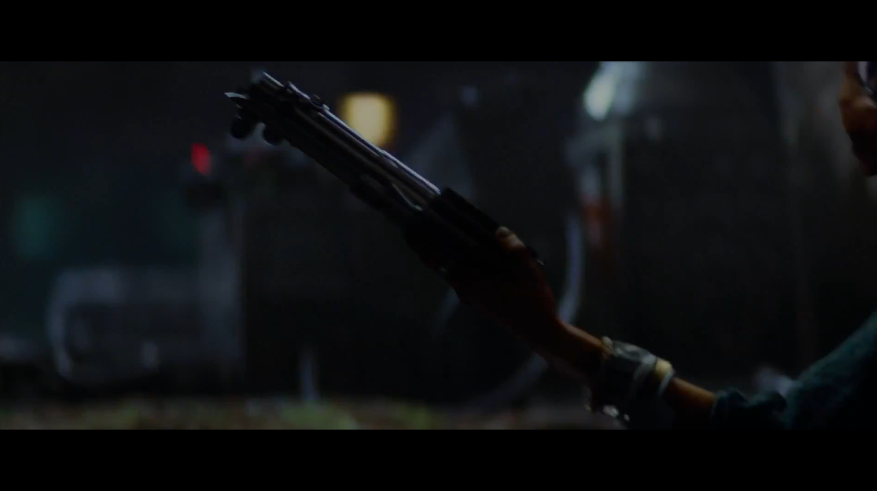 Here is one of the most interesting scenes in the trailer. On the surface we see a lightsaber being handed to someone off screen. If you look closely, however, you will notice that this is some type of alien being handing a lightsaber to someone off-screen. Knowing the species might go a long way in explaining what is possible in this scene. 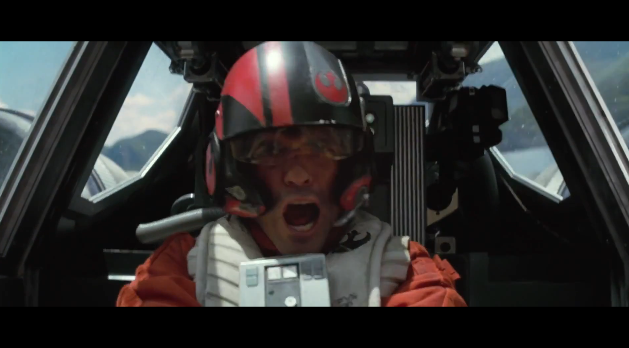 Here is a better shot of one of our principle characters, Poe Dameron, played by Oscar Issac. It’s clear he is still fighting the good fight for the Rebellion, and having a hell of a time doing it. 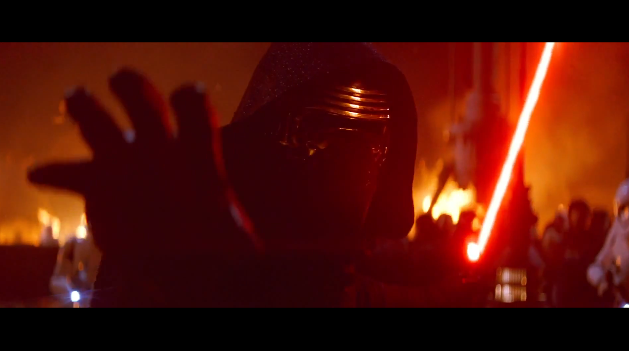 Here is our best shot so far of the newest “Sith” threat, Kylo Ren. I especially like his Kanye West glasses, and he pretty much looks like Snake Eyes from “G.I. Joe.” Conventional wisdom would say Ren is a Sith, but could be be something else? 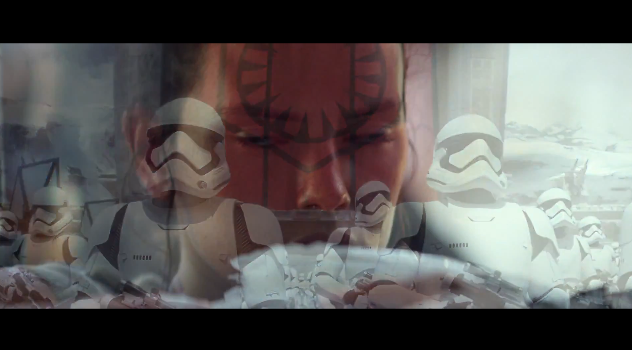 Now, this could just be speculation, but I find this frame to be very interesting. Here we have the newest version of the Galactic Empire symbol overlayed with one of our newest character’s Rey, played by Daisy Ridley. We all think that Rey is supposed to be one of our newest heroes joining the fight against evil, but could this all be a ploy and she is actually a villain, maybe even Kylo Ren? Or could she be a former member of the Empire looking for revenge or penance for her crimes against the Rebels? 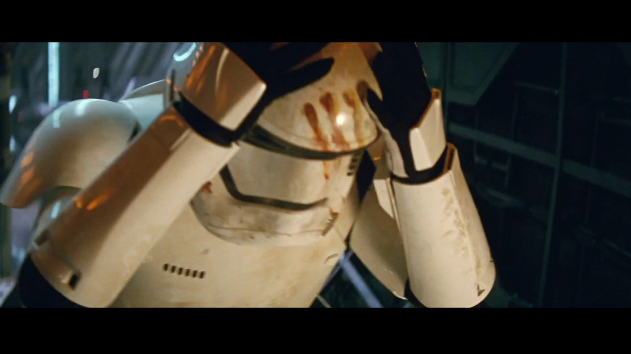 In this scene we see Finn, played by John Boyega, in a Stormtrooper uniform with what seems to be a bloody hand print on his helmet. Are Stormtroopers nothing more that roving death squads going from planet to planet exterminating any rebel sympathizers? 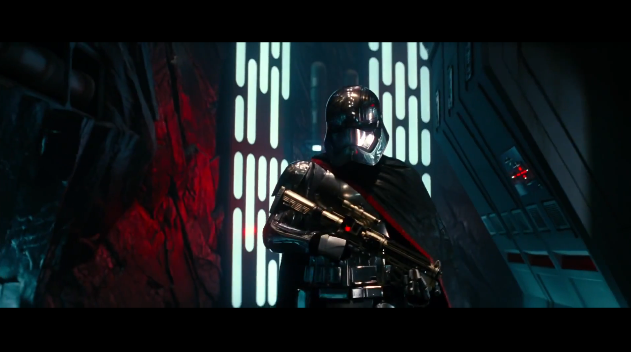 This is one of my favorite things in the teaser; a bad ass silver Stormtrooper with what looks to be a red cloak. It almost seems like a mash-up between an Imperial Guard and the conventional Stormtrooper. The interior also resembles an Imperial Star Destroyer with some cave-like attributes. Has the Empire gone underground? 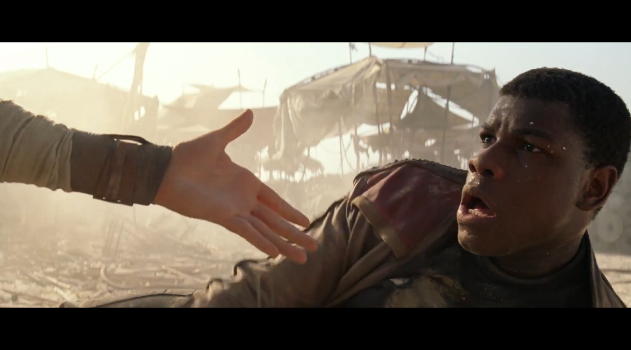 Here is a better shot of Finn in what resembles either a fly-ass Michael Jackson jacket, or see below: 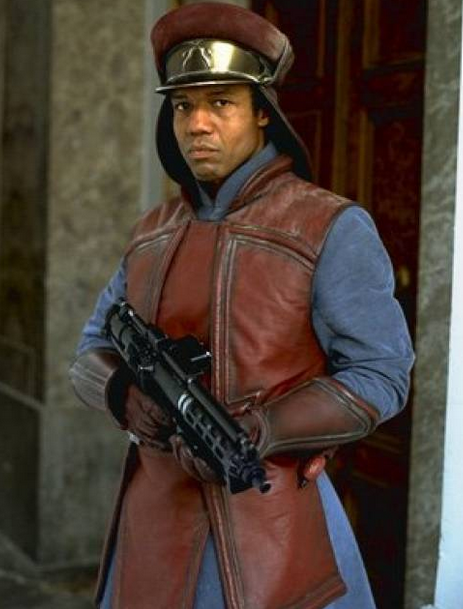 Could Finn be related in some way to General Panaka from “The Phantom Menace” or be the son or nephew of Gregar Typho, the nephew of Panaka. I know a lot of people want to forget about the prequels and any and everything to do with them, but just going off the fresh gear that Finn is rocking, could he have been an officer in Naboo’s military, or is he incognito while hiding on Jakku. 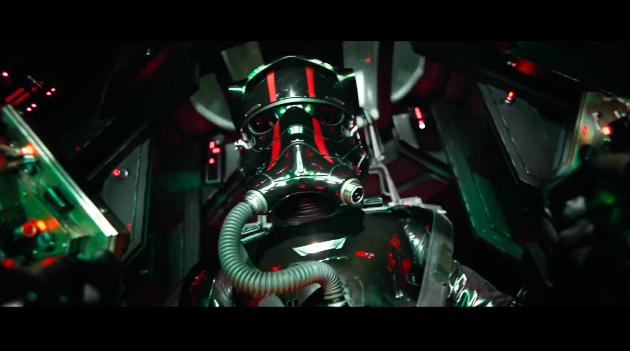 Here’ a better look at our new TIE Fighter pilots. The red on their helmets and uniforms make we think that the Sith have a tighter grip on the new Empire and have pretty much become one. 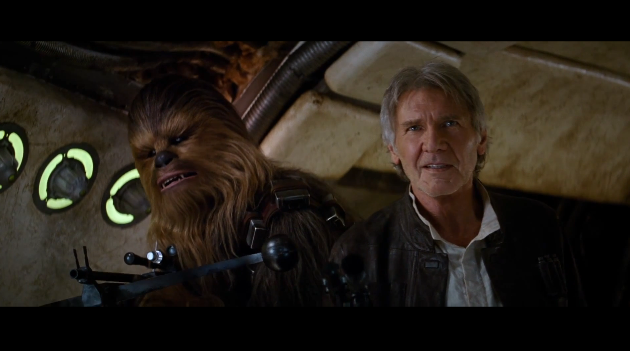 Of course here is the still when all the fanboys lost it and creamed their pants; the first look at Han and Chewbacca. 30 years seem to have treated Han well, for the most part, and it’s just an awesome thing to see both of these guys back. The still doesn’t say much but when Han says “Chewie……we’re home….” its not only chilling, but is he talking about being back on the Millenium Falcon, or maybe back in Mos Eisley Cantina. Either way, I’m cool with it.

So that’s about it. What do you guys think. Personally, I’m probably talking out of my ass about most of it, but I’ve provided you with plenty of ammo, so fire away, and may The Force Be With You…