I’ve covered quite a few obscure and strange action films here with the “Action Movie Time Machine”, but I feel that I’ve neglected the legendary Arnold Schwarzenegger. Sure I reviewed Jingle All the Way for Christmas, but the name “Arnold” is synonymous with the Action genre. So, over the next few reviews we will be celebrating the films of Arnold.
The year is 1985. The Nintendo Entertainment System was released in North America and changed home gaming forever. The first Blockbuster Video opened in Dallas Texas. Hulk Hogan & Mr. T took center stage at the very first WrestleMania and Jefferson Starship “…built this city on Rock and Roll”.
THE SKINNY
“Commando” begins with John Matrix, Arnold Schwarzenegger, yep that’s his real name. John is a former elite Black Ops Commando who has settled down in the Californian mountain tops where he is raising his twelve year old daughter Jenny, who is played by Alyssa Milano. This is long before Alyssa grew up and chose to show her bewbs in “Embrace of the Vampire”. But I digress. 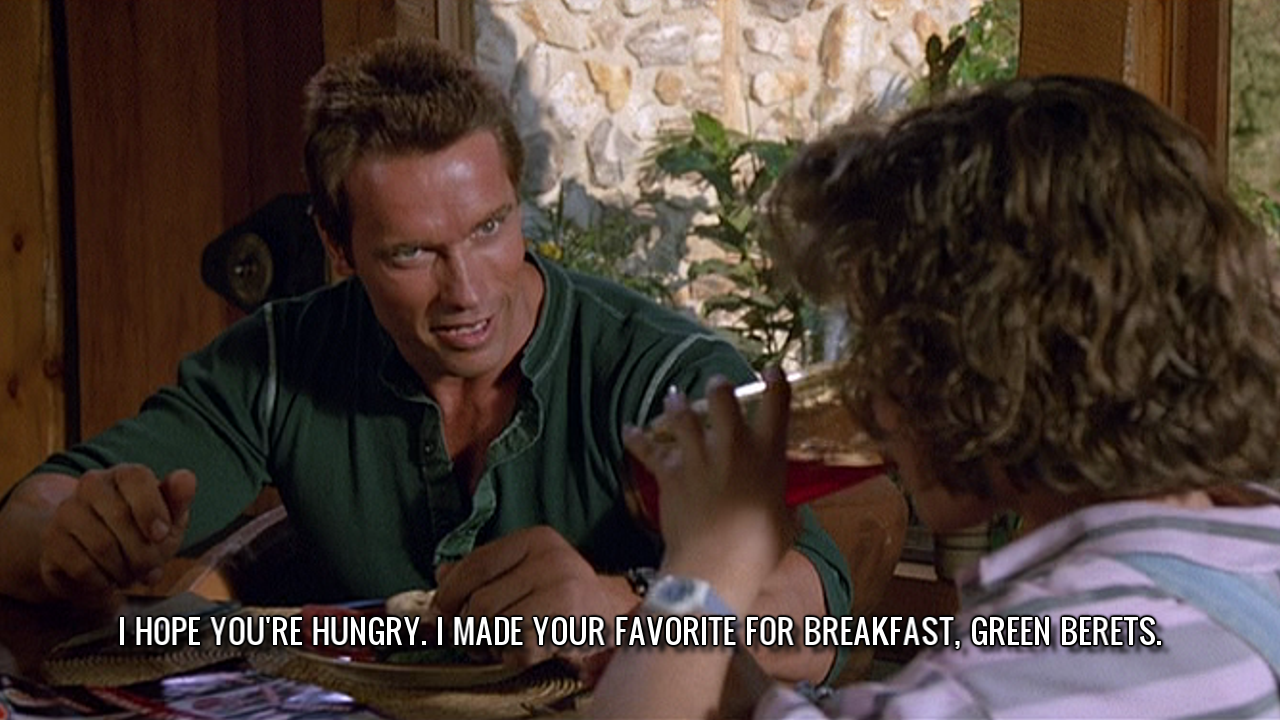 One day John Matrix is visited by his former commanding officer, Major General Franklin Kirby, who informs him that the men from his old unit are being systematically killed off by someone who they can’t identify. Soon after this warning, the Matrix family are ambushed by a para-military group and Jenny is kidnapped before John save her.
As it turns out, this group knows about John and his combat record. John is one of the most accomplished tactical fighters in the world, and after eliminating the only men who could help John, his team, they kidnap his daughter to force John into working for them. The plan is for John to assassinate some South American president so Arius, Dan Hedaya, can take over in his place. Arius has given John a deadline of only so many hours to fly to South America, assassinate the president and return or else his daughter will be killed. 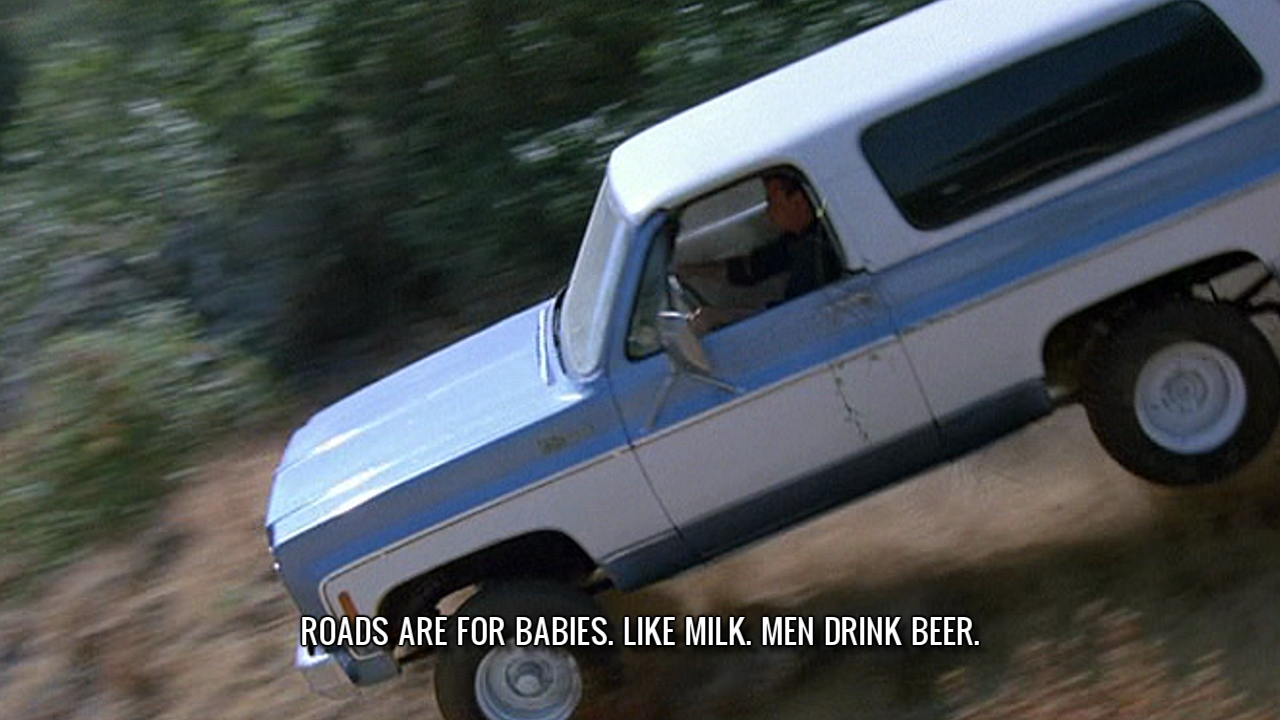 Arius is a ruthless dictator and would torture and kill his own people in order to keep his power and John knows that he will have to think outside of the box if he is going to keep the peace in South America and get his daughter back.
Working for Arius are four main bad guys. We have Jackson, Sully, Cook & Bennett. Sully escorts John and Jackson to the airport. Once on the plane John manages to snap the neck of Jackson. He then covers him with a blanket and tells the flight attendant not to disturb his friend, “he’s dead tired”.
John then escapes the plane just as it’s wheels leave the ground. He follows Sully to learn where his daughter is being held. The film takes a detour when Sully goes to a near by shopping mall where a shootout occurs which evolves into a ten man brawl between John and mall security. John follows an escaping Sully and soon after, catches up with him and drops him off the face of a cliff. This is, of course, not before he gets info that leads him to Cook. 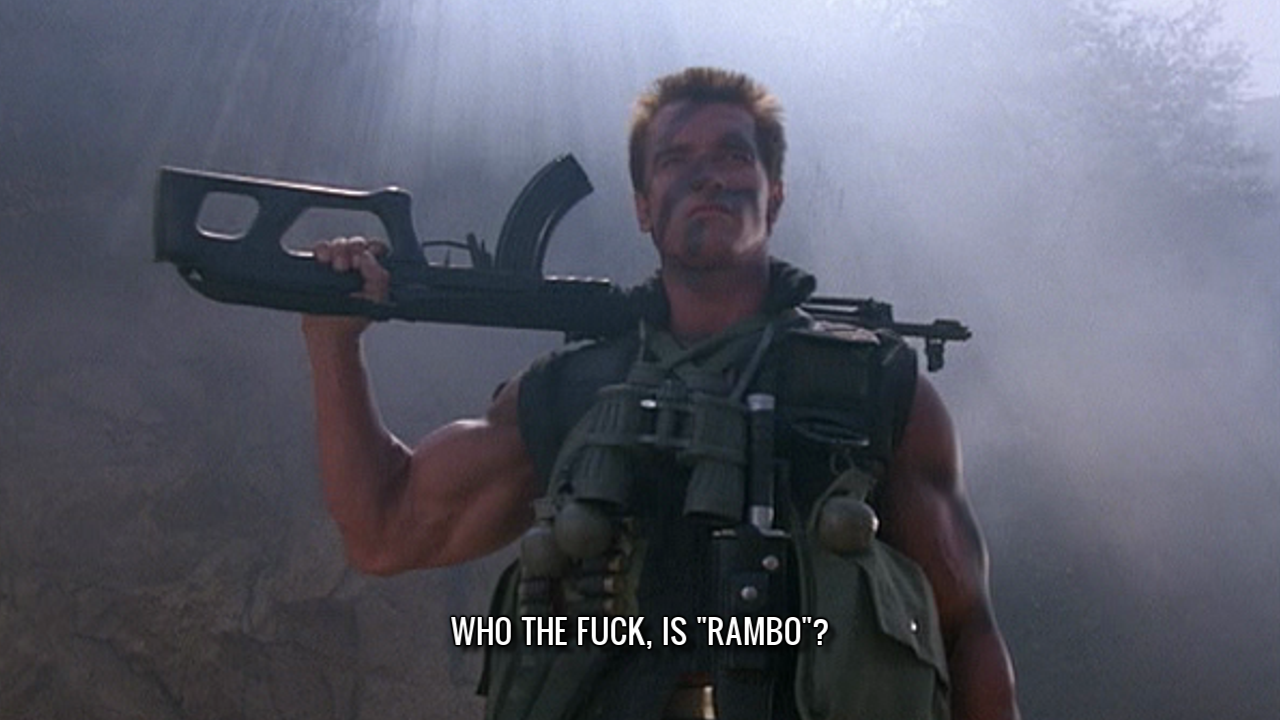 John has a run-in with Cook at Sully’s hotel room. Soon Cook has been murdered and John learns that Arius is living on an island off the South American coast and this must be where Jenny is being held captive. John, recruiting the help of Cindy, a helpful stranger, breaks into a local gun store and loads up on some heavy duty military weaponry including claymore mines and a rocket-launcher. Why does this small business owner have all these dangerous weapons you ask? Well he’s a gun nut and the Second Amendment gives him the right to do whatever the hell he wants. God Bless America!
John & Cindy then steal a plane and fly to this coastal island where the film goes from 0 to 60 in no time. Left and right, John is blowing soldiers away and after an incalculable number of bullets have been fired, all are dead, even Arius, except Bennett, Vernon Wells. 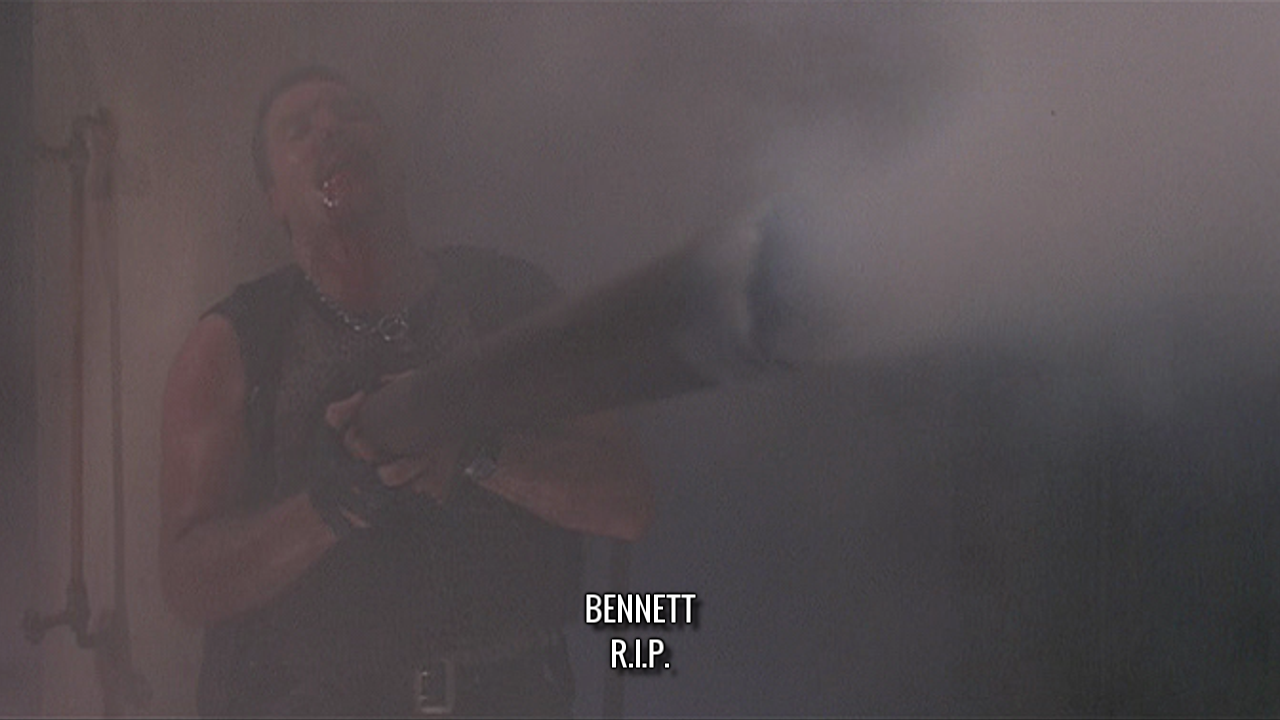 This hand to hand battle is personal between the two men and proves to be one of the more interesting fights, not only for it’s action but for it’s dialogue. There is a whole lotta strange goin’ on here. Bennett threatens to shoot John between the balls before John wallops Bennett an incredible 15 times with his massive hammer fists before impaling him with a pipe. This allows steam to escape from some sort of boiler, through the pile and also through Bennett’s body. “Why don’t you let off some steam Bennett?” is the final one-liner delivered by John Matrix before he, Jenny and Cindy fly home from the tropical island to go on living their normal lives. The End. 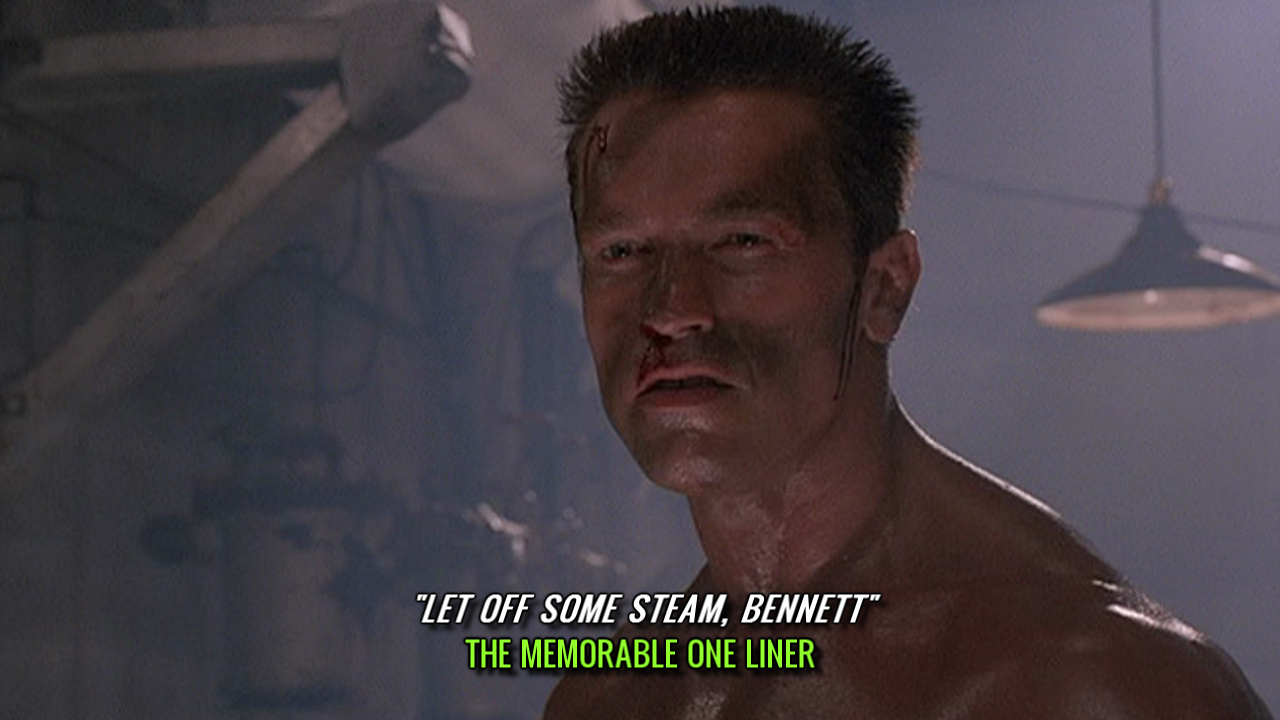 THE VERDICT
What makes “Commando” work is, first and foremost, it’s machismo. This is something that a lot of other action films try to emulate but fail hard in their attempt. Arnold portrays a man so well trained that he can’t be seen as helpless and when his training fails, he has his sweet Arnold Muscles. Who needs training when you can rip bucket seat out of a car with your bare hands? He is bad-ass!
The next thing that “Commando” has going for it is “one-liners”. Sometimes when I offer up a “Memorable One Liner” in these reviews, and they aren’t even one-liners. They might just be a funny piece of dialogue that stands out to me because they’re aren’t any one-liners in the whole damn film. “Commando” has SO many one-liners, I had to do some serious soul searching to pick the one I felt was the most ”Memorable”.
And last, but not least, “Commando” has gay overtones. Something every great action film must have. Why? I don’t know, because that’s how they did it in the ’80s, so that’s how it should always be done. It’s kinda like the Bible. When you hear someone say “turn water into wine”, you might be reminded of the Bible. And when I see a big pile of gay in my action movies, I’m reminded of the ’80s and that’s a beautiful thing.
Where is “the gay” to be found in this film? Between John and Bennett. John kicked Bennett out of his team because he liked killing too much and now Bennett will have his revenge by killing Jenny and watching John suffer. The way this is portrayed comes off like some strange steroid fueled romance gone awry. With lines like; “Come on, let the girl go, just between you and me, don’t deprive yourself of some pleasure, come on Bennett, let’s party! ”, that just add gasoline to the sadomasochist gay fire.
While the story takes some detours, it remains simple enough to be believable. The same goes for the acting. There aren’t any award winning performances here, but the subject matter doesn’t  offer many opportunities for emotion. Let’s face it, there is no room for emotion when there is a shirtless Arnold holding a rocket launcher. One more thing, the soundtrack. It sports a recurring steel drum theme that is pretty catchy. 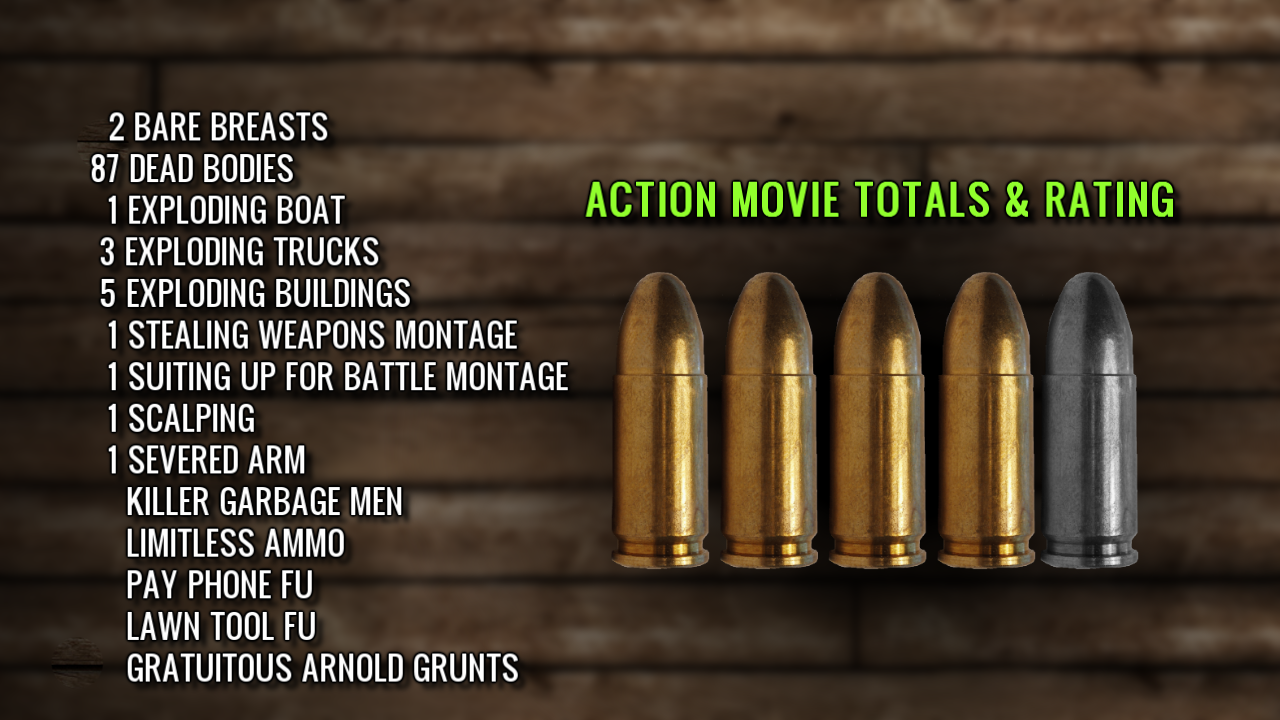 “Commando” is a blood dripping, bullet ridden, explosion filled blast that will leave you fist pumping for victory. They don’t make ’em like this anymore and that is just the reason “Commando” is the quintessential ’80s action flick.
I’m Cory Carr and this concludes another trip on the “Action Movie Time Machine”. Until next time, Semper Fi Punk!
For more from Cory, check out his website slaughterfilm.com, where he and his good friend Forest Taylor record weekly podcasts, reviewing the films that are legendary, even in Hell!