This “Action Movie Time Machine” review will conclude this here Arnold-a-thon that we’ve been enjoying so much lately. Enjoy!
The year is 1988. The Hubble Space Telescope is put into commission, the Stealth Bomber is unveiled and Nike says “Just do it”. Ping Pong becomes an Olympic sport and aside from playing the long lost brother of Danny DeVito in “Twins”, Arnold Schwarzenegger makes the long trek from Soviet Russia to Chicago to put an end to drug traffickers in “Red Heat”.
THE SKINNY
The film begins inside a Russian bathhouse as Captain Ivan Danko, Arnold Schwarzenegger, uses his fists to pound information out of a low lever thug. Danko and his partner have been investigating Viktor Rosta, a crime boss responsible for hundreds of deaths, rapes, thefts and in more recent months, he has been funneling cocaine into Russia. 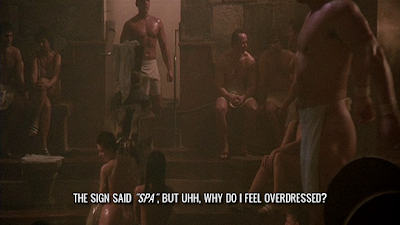 This bathhouse scene is neat and all, but like ALL bathhouses, everyone is nude. Including Arnold, and even during the fisticuffs. I remember seeing this movie as a kid – at least this part anyhow – and I giggled like the little kid that I was.
Anyhow, this information leads to an attempt to capture Rosta which is unsuccessful and even leaves Danko’s partner dead. Rosta manages to escape the country, heading to Chicago to meet with his cocaine connections, a gang known as the “Clean Heads”. The Clean Heads are a black supremest  para-military criminal organization who’s goal it to be a thorn in the side of the “white man”. Selling cocaine to a Russian crime boss is in their best interests, as it will expose an entire country of white people to what could lead to debilitating addiction and other bad stuff.
Danko receives orders to follow Rosta and apprehend him without the local police or government learning that he is even there. If his cover is blown, the snafu could result in a political black-eye for the Russian government. But for Danko, it’s personal. He is only interested in catching the man who killed his partner.
It isn’t long before his cover IS blown and the Chicago P.D. learn who he is and why he has come to the States. Detective Sargent Art Ridzik, Jim Belushi, and his partner are assigned to escort Danko around Chicago, and help him find and export Rosta back behind the Iron Curtain. 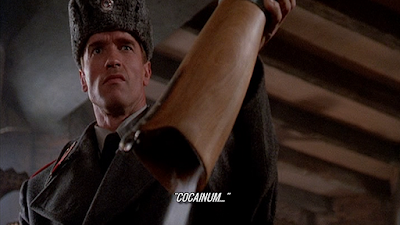 This doesn’t work out so well for Ridzik’s partner who is also killed in the line of duty – making it personal for Ridzik as well. On the up side, Danko learns that Rosta has stored his drug buying money inside a bus station locker and Danko has his key. At least, for a little while.
Now the Russian man of muscle and Chicago’s finest must team-up to prevent Rosta from following through with the drug buy. This isn’t so easy as the two men allow their differences to get between them, especially Ridzik. Remember, this film was released just months before the Berlin wall fell, so there are Soviet/American tensions between the characters. Most of these “tensions”turn out to be pretty entertaining and even shed light on some of our cultural and political differences. 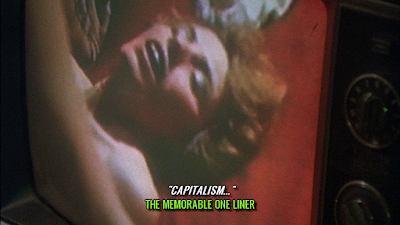 In one of these such scenes, Ridzik and Danko interrogate a low level criminal to learn what they can about the Clean Head’s involvement with Rosta. Ridzik explains that even criminals have what are called “Miranda Rights”. Danko choses to speed up this interrogation by breaking the perp.’s hand to get him to talk. I guess they do things differently in Russia.
This Miranda scene is a set-up for another in which Danko is staking out the apartment of Cat, an American wife of Rosta who is played by a young Gina Gershon. As Danko sits in his car, a neighbor comes down to bitch that Danko is parked in his space. Danko asks the man; “Do you know Miranda?”, to which the man replies “No, I’ve never met the bitch.”. Danko follows that up with knock-out punch. It’s something that I didn’t expect, but I sure wont forget. 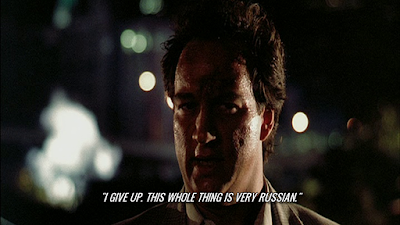 Moving on. Danko & Ridzik learn the location of the locker and the time when Rosta will show up to get the money. They try in intercept him, but what happens is Rosta steals a Greyhound bus and makes a hasty get-away. So, naturally, Danko & Ridzik steal their own bus and destroy half of Chicago chasing after him. 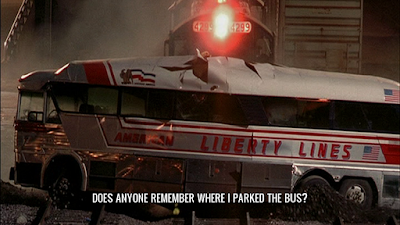 Eventually they follow Rosta gets turned around, and he and Danko play chicken, nearly missing each other. Mortally wounded, Rosta is finished off by Danko when he unloads on him. Case closed. 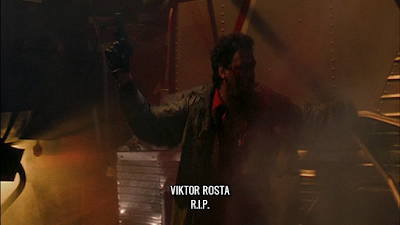 The film ends with Danko & Ridzik exchanging pleasantries at the airport as Danko gets ready to leave the country and return to Mother Russia. The End.
THE VERDICT
“Red Heat” is better than I remembered. It’s a classic “odd couple” team-up in the same tradition as “48 Hours”. Schwarzenegger doesn’t say too much, playing into the cold and calculated Soviet ideal of what a police officer should be, but he manages to use this demeanor to set up and deliver some of the funniest gags in the film. Something, I don’t think, Arnold it known for. Intentionally anyhow.
The same can be said about Belushi. He is perfect as the jaded and wisecracking cop who knows how to grease the wheels in order to get his job done. But he also nails being a hard-ass.
The action is good, the story is simple and entertaining. There are several memorable supporting characters; Peter Boyle play the Zen seeking Commander of Ridzik, and a co-worker of Ridzik is played by Lawrence Fishburne during his younger Malcolm X days.
It’s a shame this film is so underrated. I think this may be – at least in part – the result of it’s original ad campaign. If you watch the trailer you’ll see clips of Belushi joking and Schwarzenegger delivering cold broken English. What’s unfortunate about this is that Belushi isn’t just comedic relief, and some of what Arnold says are punchlines or set up to jokes taken out on context, but you’d never know it from the trailer.
“Red Heat” it totally worth checking out if you haven’t seen it before. As a standard detective flick, it isn’t as over the top as some of Schwarzenegger ’80s films, which might make it less memorable. But never the less, check it out if you get a chance. 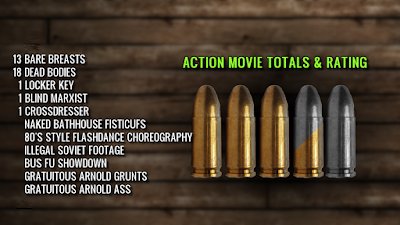 One final fun fact about “Red Heat”. The opening scenes that depict…Red Square, or where ever it’s supposed to be, were actually filmed in Russia illegally. The footage had to be snuck out of the country. Seems like a lot of work for footage that isn’t very important, but it makes for an interesting story.
I’m Cory Carr and this concludes another trip in the “Action Movie Time Machine”. Until next time, Semper Fi, Punk!
For more from Cory, check out his website slaughterfilm.com, where he and his good friend Forest Taylor record weekly podcasts, reviewing the films that are legendary, even in Hell!