The year is 2015. Funny man and “Late Show” television host David Letterman calls it quits after thirty-three years, “Jaws 19” premieres and breaks every previous box office record, gold medal Olympian Bruce Jenner undergoes a sex transformation – becoming Caitlyn Jenner, and both Hillary Clinton and Jeb Bush announce their entry in the 2016 United States Presidential race.
Little did they know, that announcing their bid for the presidency would polarize the country in a way that had not been seen since the Civil War. American citizens were divided into two factions – either Blue or Red – and began skirmishing with one another. Buildings were burned and blood ran in the streets.
The events of the Party Wars, as they would later be known, brought on the first collapse of the United States of America, and later the atomic bombing of New York City. This attracted the attention of imperialistic space aliens who’s invasion was fought off by the people of Earth. This triggered a chain reaction of events; The Alien Wars I-III. The aliens were finally fought off when robotic soldiers were created to protect humans. Once the robotic soldiers became self-aware, they turned on their human creators which lead to The Robot Wars. After all this, America wasn’t very popular, as the country was directly responsible for the previous catastrophes. As a result, Soviets began launching nuclear weapons at the United Stated. This lead to The Apocalypse War. And finally, The Franchise Wars, which guaranteed that Taco Bell would be the one and only fast food restaurant.
All this, and an indie action flick, “Kung Fury”, took the world by storm.
THE SKINNY
“Kung Fury” takes place during 1985 Miami, and begins in an ’80s style arcade. The “Laser Unicorn” arcade machine comes to life and begins attacking the patrons of the arcade, then the townspeople of Miami. Outmatched, the Miami police call in for backup and soon Kung Fury, David Sandberg, is on his way. Kung Fury makes short work of the renegade arcade machine. This fight takes place on the ground, in the air, and even in space for optimum bad-assery. 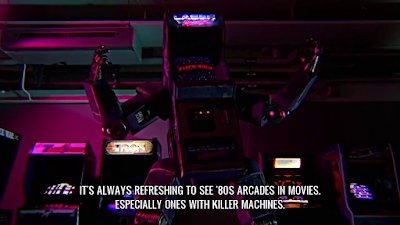 Meanwhile, somewhere in a back alley of Miami, the wind picks up and lightning begins to strike. Suddenly a time portal opens up and one Adolf Hitler steps out. To be continued.
Kung Fury returns to the office to talk to his commanding officer who reams his ass out, in typical action movie fashion, for destroying an entire city block with his arcade machine battling efforts. Afterwards, Kung Fury’s commanding officer receives a phone call a mysterious stranger. Who could it be Hitler…? Well yes, it is in fact Hitler and through the phone, Hitler assassinates Kung Fury’s boss in an attempt to lure Kung Fury into a confrontation. 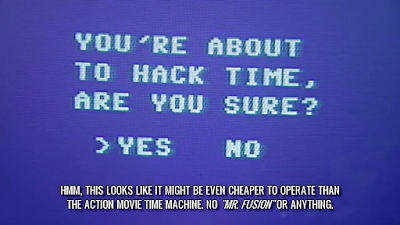 Most people don’t realize this but Adolf Hitler was a martial arts master who has grown envious of Kung Fury and his martial arts mastery. If Hitler can eliminate Kung Fury, we will obtain the art of Kung Fury – the super secret and ultra deadly martial arts style who “Kung Fury” is named after.
Kung Fury attempts to locate the murderer of his boss and in doing so recruits the help of Hackerman – the greatest hacker in the world. Hackerman – through his hacking talents – ascertains that the one and only Hitler was responsible for the murder and offers to “hack time”, sending Kung Fury back to Nazi Germany to confront Hitler before his evil plot began. But there is a problem…Hackerman mistakenly sends him back too far in time. All the way back to the Viking age. 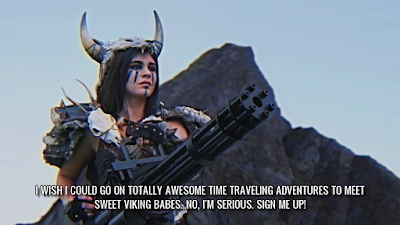 There in the Viking Age, Kung Fury meets up with some totally sweet Viking babes who he pleads his case to and agree to help him. How do they do this? Well by calling upon the Thor himself. Thor, with all of his mystical Norse powers, uses his might hammer to open time portal to send Kung Fury to the appropriate time – somewhere in the early 1940s. 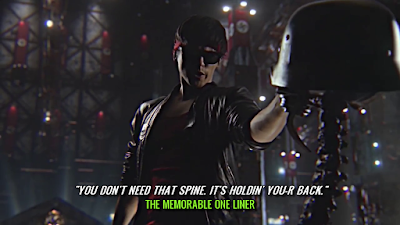 There, in Nazi Germany, Kung Fury confronts a horde of Nazi soldiers who he fights – hand to hand – one by one before being out numbered and out gunned. Just then, the cavalry arrives in the form of another one of Thor’s time portals. From this time portal enters Thor, Hackerman who has hacked himself into a robot, two sexy Viking warrior babes, a talking T-Rex and last but not least, Triceracop – Kung Fury’s recently assigned partner who just so happens to be half man and half triceratops. Kung Fury and his pals fight hundreds of Nazi soldiers, killing them where they stand before Hitler is vanquished…or is he? I won’t be the one who spoils the end for those of you who haven’t seen it. Just know that “teamwork is important”…and go WATCH IT! 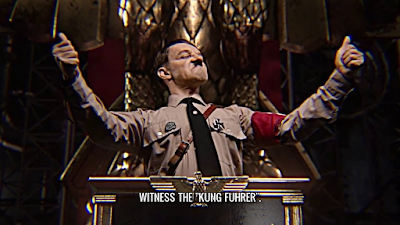 THE VERDICT
“Kung Fury” is, honestly, one of the most entertaining things I’ve seen in some time. It is a wonderfully  bad-ass and nostalgic blend of all things ’80s set inside an action film. Not only does it incorporate the aesthetics of ’80s special effects film making – recreated digitally – but it takes place within the shortcomings of VHS.
“Kung Fury“ is almost as if a child dumped his toy chest out onto the floor and started to pretend that all of his toys somehow belonged in the same reality – and that is “Kung Fury”.
There is time travel (Terminator), robots (everything in the ’80s, but also Transformers), dinosaurs (Teenage Mutant Ninja Turtles and Dinosaucers – whatever the hell that is.), animation (G.I. Joe and Thundercats), as well as stereotypical action movie stuff like the traditional partner who gets killed by the villain in the first act, pun related one-liners and countless dead.
One of the things that makes “Kung Fury” so entertaining, is it’s humor. I’ve tried to avoid too many of these details for those of you who haven’t seen it yet. Just know that it’s…go watch it.
Much of what can be nit-picked are minor things. For instance, the acting is stiff and a bit over the top. But this is intentional, in an attempt to capture some of what ’80s action films had to offer. If you’ve read my reviews you’ll know that action icons such as Chuck Norris and Jean-Claude Van Damme aren’t the best actors and sometimes their films reflect that. It isn’t a terrible thing, but rather, something that has become synonymous with the genre of that era. My only honest negative remark is the faux VHS effect. I don’t know what it is exactly, but I’ve seen it used a handful of times and each time it looks like an obvious fake. I appreciate the effort to try to make an “’80s film” resemble a film on VHS from the ’80s, but it just doesn’t look right. They always look like a digital film edited digitally to resemble that classic VHS quality. Again, this is a nit-pick but it’s worth stating. 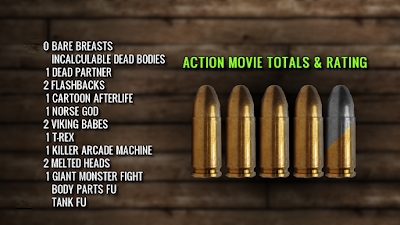 Honestly, there isn’t much I can say about this. There is no underlying meaning or hidden message. If there was, it would be; “Remember the ’80s? Wasn’t that a wild time? REMEMBER IT FOREVER!”. And for that I highly recommend “Kung Fury”. Watch it and pick apart each scene to uncover it’s particular ’80s influence. Watch it now and have a blast! Did I mention that you should watch it now? WATCH IT NOW!
I also reviewed “Kung Fury” for Slaughter Film which sparked a bit of a conversation between my co-host and I. If you’re interested, check it out.
I’m Cory Carr and this concludes another trip in the “Action Movie Time Machine”. Until next time, Semper Fi, Punk!
For more from Cory, check out his website slaughterfilm.com, where he and his good friend Forest Taylor record weekly podcasts, reviewing the films that are legendary, even in Hell!