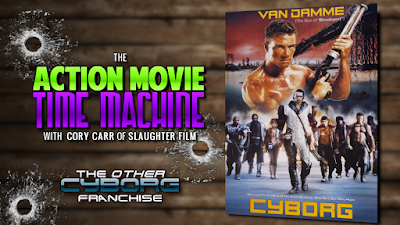 ANIME-ISH
With  a new “Terminator” movie in theaters, I thought it best to take a look at another film series that features cybernetic entities, “Cyborg”. Oh, why not the “Terminator” franchise you ask? Because punk! I just reviewed a bunch of Arnold flicks , and besides, I bet you don’t know nothin’ about “Cyborg”.
The year is 1989. The Exxon Valdez runs aground and spills 1,2000,000 gallons of oil, Nintendo releases the wildly successful Game Boy, and  “Batman” battled “Indiana Jones…” at the box office. All this and Jean-Claude Van Damme battles to save the world from futuristic pirates in “Cyborg“.
THE SKINNY
The film takes place in New York City , in “the future” and it’s explained to us in a voice over that over the past few decades there has been anarchy, genocide, famine and now a plague that has ravaged humanity. But there is hope, in the form of a cure.
These words are told to us by Fender, Vincent Klyn, the films antagonist and all around evil guy. He then explains that he enjoys the suffering, the death and he wants to get his hands on the cure so he can control it and live like a god – choosing who lives and who dies. 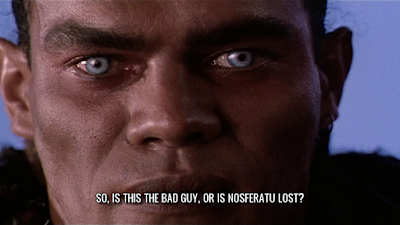 Early in the film, Fender and his gang of post-apocalyptic dressed Village People rape and pillage a seaside settlement and as this happens, we see a lady cyborg being shooed out the back. She has been given specific orders to escape Fender and his gang, locate and hire a “slinger” to help protect her on her journey and deliver the cure to the right people in Atlanta who will be able to develop it and restore humanity.
Somewhere there are internet nerds writing blog posts theorizing that “Cyborg” and “The Walking Dead” are somehow connected. There aren’t any zombie in “Cyborg“, but the plague could be the same disease that brought about the “walkers”. And just because you don’t see zombies, doesn’t mean that they aren’t there. In the second season of The Walking Dead, Rick’s crew make their way to the C.D.C. in Atlanta looking for salvation and answers. In “Cyborg” the lady cyborg, who’s name is Pearl, is also making her way to Atlanta to deliver the cure and reach salvation. Conspiracy alert! “Cyborg” is set in the future of “The Walking Dead“. You just read it on the internet, so it MUST be true!
Fender is one of those evil dudes who’s goals are so extreme that you wonder, “if he gets his way how would even he survive?”. He’s a bit of a comicbook super-villian in the way that they might concoct a scheme to destroy the world, never taking into account that if Earth explodes so will they.
I mean sure, he will have the cure, or at least the recipe for the cure, but he isn’t a scientist. How the hell would he know what to do with it if he catches the plague? Or if enough humans die, what is there to rule over? Does this guy know how to grow and cultivate his own food to survive in this post-apocalyptic wasteland?
We’re only ten minutes in and already Fender’s motives are suspect. But I digress. 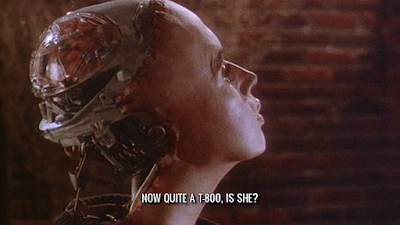 Soon Pearl happens into the same ramshackle town and encounters Gibson, Jean-Claude Van Damme, who is a former “slinger” and survivor of this brutal world that they live in. Pearl explains her quest – even telling him that she is a cyborg as she pleads for him to escort her to Atlanta. But before he can make up his mind, they are ambushed by Fender and his gang. They take Pearl and leave Gibson for dead.
This isn’t the first time Gibson has encountered Fender. As we learn through an entire series of flashbacks, Gibson gave up the life of being hired mercenary, aka “slinger”, to settle down with the love of his wife and her two children. But not long after they settled in a nice country home, Fender shows up to rape, kill and kidnap Gibson’s newly adopted daughter to be used as a sex slave.
Now, only mildly interested in saving the cure, Gibson heads south from New York to Atlanta to track and hunt Fender.
Along the way Gibson meets another damsel in distress, Nady, Deborah Richter. He allows her to tag along while protecting her from Fender’s attacks and she in return acts as his moral compass. Before long, Gibson softens to the young woman and she becomes his love interest.

This is something that Fender uses to his advantage once he is tipped off that Gibson is tracking him. He sets a trap, luring Gibson and Nady into an abandoned factory building where Gibson manages to fight off wave after wave of attacks before he is outnumbered and forced to flee with a wounded Nady. Fender and his gang follow Gibson and Nady, and they are overtaken .
But first, Gibson’s kidnapped daughter makes her presence known. Now, all grown up and brainwashed, she appears, to show her adopted father that she is now in love with her captor. Whoa, what a mind fuck!
Gibson is tied to the mast of an old sailboat and left to die…again. Flashbacks of Fender attacking his family bring on a rage educed “hulk-up” that allows Gibson to shatter the mast – freeing himself – and he and Nady continue on to Atlanta in pursuit Fender and Pearl. 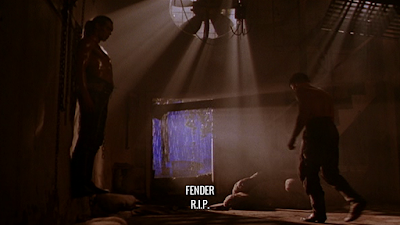 Along the way Gibson gets a clue and this time decides to not play by Fender’s rules and instead plan a trap for him. Like a scene out of “300” or “Lord of the Rings”, Gibson forces Fender and his gang through a narrow passage in some junkyard town – The Battle of Helm’s Garbage Heap.
Here Gibson picks off Fender’s remaining crew before he and Fender battle it out themselves – just as  a storm rolls in. Because you can’t have a kick-ass final boss fight with out thunder and lightning.
The slug-fest ends when Fender introduces a knife. Gibson breaks his arm, takes the knife and stabs him in the chest with it. Ya think that would be enough, but it isn’t. Fender re-animates and the fight continues. Gibson then impales him on a giant hook. 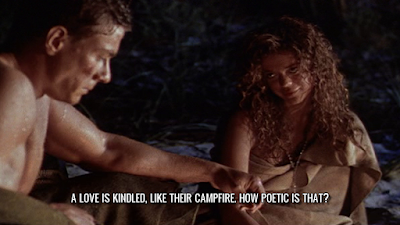 In the end, Gibson gets reacquainted with his kidnapped daughter, Haley. They, with Pearl, mourn the loss of Nady, who was killed protecting Pearl from Fender’s gang leading up to the final fight.
Before the credits roll, we see Pearl reaching her Atlanta contact and I can only assume that the cure fixes the world…Who am I kidding? I know that’s not true because there are two more “Cyborg” movies.
THE VERDICT
Gibson becomes locked in heated battle with Fender to a fight to the death… So these guys are named after guitars…*facepalm. Wait a minute, the name Pearl is a company that manufactures top of the line drums. I would bet money that they tried to name Nady “Zildjian”.
The story isn’t the most original, but it isn’t bad. It’s really a collection of futuristic things thrown in the same pot together and often feels like an anime in the way the fights are choreographed and filmed, and even “The Seven Samurai” somehow. Some scenes have minimal dialogue and this might be what lends itself to feel a bit like an anime – sorta foreign.
The cyborg effects don’t look as good as say, “Terminator”, but for a low budget Cannon film, I think they turned out pretty good. Believe me, I’ve seen some crap effects in my time and these here aren’t half bad.
The fights are creative in the way Gibson and his enemies use their surroundings, and in JCVD’s case, his splits. What makes the fights look less good is the editing and certain camera angles. This is true for the entire film, mostly where editing is concerned. It just isn’t edited very smoothly. And as for the camera angles, sometimes the camera is in a creative place/angle while other times it feels like it’s in the way of the action.
The acting is the weakest element to this film. JCVD isn’t the best actor, but he certainly isn’t awful. With that said, this is one of his earlier works and isn’t his best. The rest of the cast is on par with the special effects – not the greatest but by Cannon standards it’s top notch. Vincent Klyn however…is something. He’s odd to look at and odd to listen to and some of his dialogue seems like it was written with “A Clockwork Orange” in mind or something and…he’s just an odd dude. 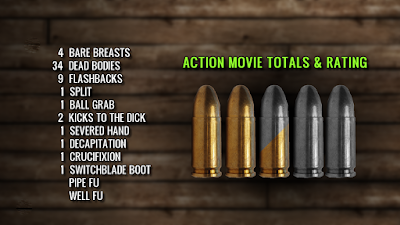 So in conclusion, “Cyborg” is an interesting addition to the post-apocalyptic sci-fi films of the ’80s not as good as the immortal “Terminator” and certainly not as bad as some of the other post-apocalyptic VHS flicks that I’ve reviewed in months past. It hovers somewhere between entertaining and watchable.
I’m Cory Carr and this concludes another trip in The Action Movie Time Machine. Until next time, SEMPER FI PUNK!
For more from Cory, check out slaughterfilm.com. The home of weekly podcasts, reviewing the films that are legendary, even in Hell!