Terminator Genisys’ fault is that it’s a Terminator film. This movie tries so hard to fit in and yet that makes it stick out. Is Genisys a good film? It’s fine for a summer popcorn film. It doesn’t suck, but I probably won’t be watching this again anytime soon. 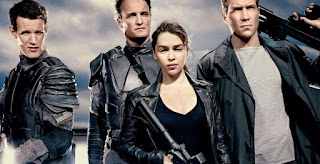 Why Complex? The script and casting make this an okay summer film. If they just fixed the casting problems then I’d say its better then fine. Oddly enough the casting killed me more so than the issues with the script. 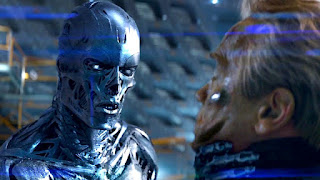 Surprised with Emilia Clarke. Heard a lot of bad things about her as Sarah Conner but compared to the other casting she won me over (and plus she is so damn pretty…sigh). 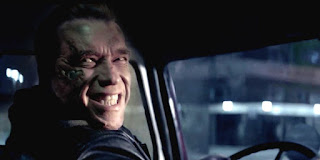 The idea that Genisys (Spell checker hates this word) is this universal OS on all your devices comes off cheesy as hell. They never show it but just a count down, and everyone is loosing their minds for it. If they actually showed it (a bit of the GUI) I’d be less angry with it. Oh and all the Billboard Screens with the count down was making me cringe as I sat there after paying $25 in tickets plus $8 popcorn and two waters at $5 bucks each…ugh the cost is hurting and the cheesy parts aren’t helping.

The casting of Simplistic Reviews’ favorite actor Jai Courtney…who as you can guess is no Kyle Reese. Killed me every time he appeared on screen.

Oddly not as much as Jason Clarke (who I like but Don’t like) as John Connor did, it’s bad casting. What they do with the character doesn’t help ether, it kinda felt like a cop out. He looks nothing like a John Connor and at this point I’m thinking they just casted him for his last name to save room on the billboard with Emilia Clarke.

Oh god that complex storyline with it’s plot holes and horrible no way funny dialogue. You know what I’m talking about? Those suppose to be funny scenes that fell flat?

But hey after viewing the trailers I lost every care to see this film. So to say the trailers sucked but the film didn’t is not a good thing for it’s promotion, but it is good for me since I spent money. :/ 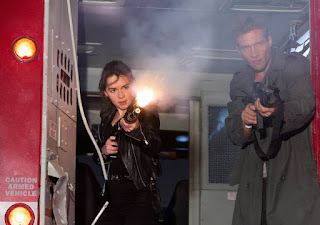 All in all its a weak but fine and somewhat fun but complex popcorn film to watch during this summer, even with it’s large ass problems.