Oh dear god, I’m back with another “Cyborg” movie. I bet you didn’t know there was a second one, let alone a third, but here we are. In fact there are four of these movies…kinda…sorta. But all that cheesy goodness will be revealed soon enough. Today we will be continuing where we left off in “Cyborg 2: Glass Shadow”, as we get reacquainted with Cash in “Cyborg 3: The Recycler”.
The year is 1994. Men everywhere were booby-trapped (pun intended) when the Wonder Bra made it’s debut. Nickelodeon was on fire with shows like “Aaahh!! Real Monsters”, “The Secret World of Alex Mack”, “Clarissa Explains It All” and “All That”. The song “I Swear” by All 4 One played so often on the radio that many considered suicide. All this and Cyborgs start popping out babies.
THE SKINNY
“Cyborg 3” begins several decades in the future from where we left off with Cash and Colt, who were carving a home for themselves out of the desert. Now, the humans and the cyborg are at odds. The disease that ravaged the humans, during “Cyborg”, has left them weak. And since the Pinwheel Corporation has come to an end, in “Cyborg 2”, the world economy has collapsed. There is no growth and no innovation. For humans to survive they must resort to cannibalizing cyborgs for their parts in order to repair their aging technology. This has created a need for “recyclers” men and women who travel the wastelands searching for cyborg parts. Even hunting cyborgs to harvest their pieces. 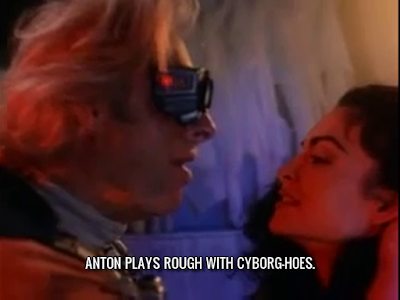 Here we meet one such recycler, Anton Lewellyn, Richard Lynch, who has made a living murdering cyborgs for their parts and taking their eyeballs as his trophies. In an early, and very superfluous scene he tries to sell damaged cyborgs to Lord Talon, Malcolm McDowell. Anton and Lord Talon have done business in the past which came to a dismal end. It seems Anton sold the Lord a sexy cyborg who came fitted with “Glass Shadow” explosives. And since this rather explosive encounter, Lord Talon has been equipped with a robotic right hand. I say this is superfluous scene because, sure, we learn a little about Anton, but we never see the Lord Talon character again. The filmmaker wanted to use Malcolm McDowell’s star power to help sell this underwhelming film. McDowell is even featured on the cover of the VHS as if he were the star. Well I guess “the old in-out, in-out” wasn’t coming as often for this little droog  in 1994, and McDowell had to stoop low for a paycheck. 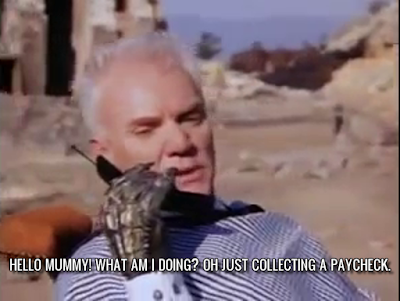 Anyhow, after meeting with Lord Talon, Anton and his sidekick/muscle Jocko, Andrew Bryniarski,head over to the ol’ cyborg whore house for some tail. Here we see Anton pays to torture a naked dancing cyber-gal. Anton is one sadistic son of a bitch. She just wants to love?! This is important because, as he leaves the whore house located in some dusty ghost town, he encounters Cash. Being the ever shrewd recycler, Anton  notices how special Cash is – after all, she is one of a kind. From this point on it becomes his mission to hunt Cash and sell her to the highest bidder.
Cash on the other hand was visiting a cyborg clinic located in the ghost town. She has been feeling weak and has come to see what the problem is. Surprise, it’s a baby! Yep, old Colt knocked Cash up. This is interesting because we see Colt die of old age… Was his wiener still working or…what the hell’s goin’ on here? I guess it doesn’t matter anyway, because the good doctor sends Cash, Khrystyne Haje, away on a quest to find Evans, played by THE Zach Galligan from “Gremlins”. Evans was a cyborg designer from back in the day. If anyone can know how Cash got pregnant and what she should do, it will be him. 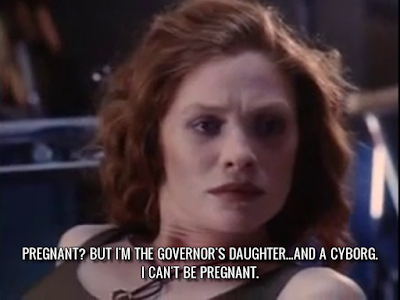 Now Cash must travel through the desert with Anton hot on her trail. Just when she arrives at Evan’s…cyber cave and he runs some tests to prove that she is in fact pregnant. Built with a cybernetic womb and cryogenic sperm bank. The next obstacle to overcome to get Cash to care about the child. At the moment she sees it as a threat to her life. As it grows inside her, it drains her resources. She lacks the nurturing instinct that human woman possess naturally. According to Evans, this is the reason why cyborgs like her was never made, and yet here she is. Again, Cash is a one of a kind.
Anton finally catches up with Cash. She and Evans hop into her not so futuristic dune buggy and head to “Cy-Town” located in the “free zone”. It’s another deserted city. But this is time it’s one protected by a sophisticated force-field that scrambles cyborg tracking radar, making it appear invisible to recycler. This is the only place cyborgs can live in total safety. 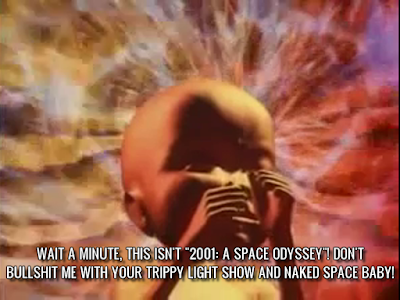 Here in Cy-Town, Cash delivers her baby – a weird cyborg tube…thingy. Apparently newborn cyborgs look like softball sized spark-plugs. Her evolution into motherhood wins the hearts and minds of the other cyborg residents who weren’t interested in protecting her from the recyclers on her trail. They would rather just leave her out in the open to keep Cy-Town hidden.
Oh did I say that “recycler” were on her trail. Yep, Anton is a little pissed that Cash and Evans got away and he knows they are headed to Cy-Town so he calls in back-up. Every other recycler he known is traveling through the night to where Cash’s was last picked up on cyborg radar.
Anton plans to capture Cash for himself, while letting his recycler friends have at the rest of the population. It would be the largest single cyborg harvest ever. 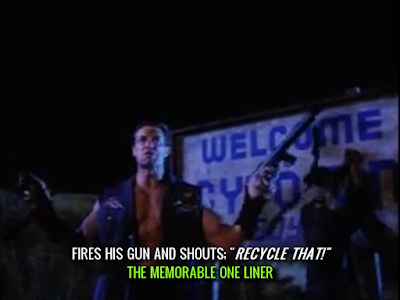 In the mean time, Evans begins repairing the rag-tag group of wounded and maimed cyborgs who are barley alive to begin with, and preparing them for war against the recyclers – which makes up the final ten or fifteen minutes of the film. Cy-Town looks like a future-realistic version of the Island of Misfit Toys. Poor bastards.
The recyclers find their way into Cy-Town and the battle begins. Eventually Anton and Chas encounter each other, as action movies often end with the main character and villain duking it out at the end – if ya didn’t know by now. Cash, in an act of superb tactical planning, or maybe just post-pardon lunacy, uses her child as a decoy so she can full Anton fill of bullets. As he lays dying, he belches out one hell of a string of last words; “Sweet mother of god, this bitch sure has some interesting programming.” lol what? And the cyborgs live on. 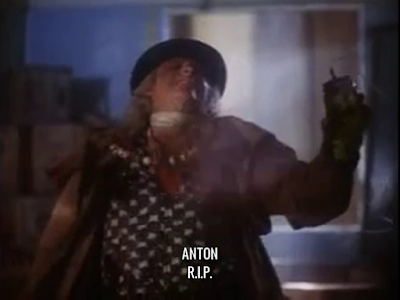 THE VERDICT
“Cyborg 3” is perhaps even less visual than the previous films. With what I assume is an even smaller budget, “Cyborg 3” is the perfect example of what a straight to video movie is. It is an inferior sequel to a franchise that was forgotten long before it was made. But that doesn’t mean that “Cyborg 3” is bad. It’s just cheap.
There is great acting mixed with poor acting. B-list celebrities mixed with nobodies. Fight choreography, explosions and stunts mixed will lame practical effects.
Fortunately there are some neat ideas nestled within all of the previously mentioned hodgepodge of what have you.
For starters, Cash has to learn to accept that she will be a mother. It’s interesting to see her character evolve and deal with something that woman face everyday – changing their entire lifestyle to care for their baby. It’s something that often leads to a deep depression.
Khrystyne Haje’s portrayal of the Cash character was well acted, but she didn’t seem to feel at home during all the action. Angelina Jolie did a little better job handling the rough and tumble stuff, and selling her character being a bad ass.

Another deep character arch involves Jocko, Anton’s muscle. Jocko carries out Anton’s brutal bidding, murdering cyborgs left and right – even though he is a cyborg himself. With Cash’s help, Jocko learns that he was once a medical officer deployed during war time to act as a battlefield surgeon. He went from saving lives to taking them when Anton stole Jocko from some military depot and erased his memory in order to use him as a muscle bound slave. Once Jocko learns this, he repents by turning on Anton during the final shoot-out. This ends in an emotional conclusion for Jocko that I wouldn’t have expected from a film of this caliber. 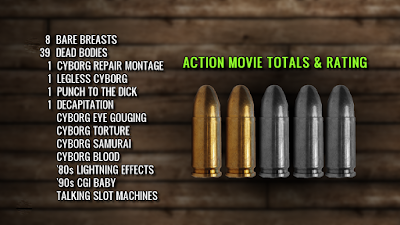 So in conclusion, there are two ways to look at this film; the first being that it is cheaply made rubbish, and the second being that it is thought provoking and emotional. Somehow both of these are true and I personally feel that if you are willing to sit through “Cyborg 2” then this is required viewing. It’s one of those flicks that you won’t regret watching it, but at the same time you could easily not know it even exists.
Up next will be “Masters of the Universe” starring Dolph Lundgren, and no I’m not kidding. Find out why, next time.
I’m Cory Carr and this concludes another trip in The Action Movie Time Machine. Until next time, SEMPER FI PUNK!
For more from Cory, check out slaughterfilm.com. The home of weekly podcasts, reviewing the films that are legendary, even in Hell!