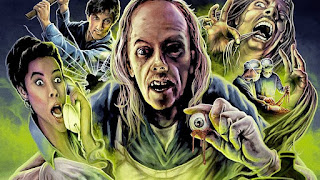 HBO had Tales from the Crypt, Showtime had nothing. But that all changed on August 8th 1993, Body Bags an anthology TV movie aired on Showtime…and that was it.

A star studded of a cast came together to make an extremely un-filling 91 minutes. Tales from the Crypt had the Crypt Keeper hosting its episodes, Body Bags had “The Coroner” played fantastically by the great John Carpenter. Yes I know I’m comparing apples and oranges, TV show with TV movie but clearly this is what Showtime had in mind. They had the power to do something unique but instead came up short. 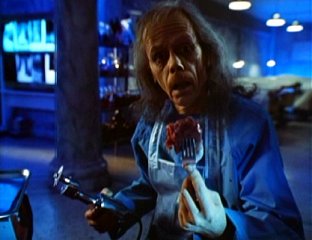 The three best things are John Carpenter playing The Coroner, who is the most entertaining piece in this puzzle of a film. The second is the first story, “The Gas Station” which is a solid story that sets you up to be disappointed. The third is the cast, a balls to the wall of this guy and that comes up short. I liked this cast alot. It’s a shame they didn’t make more, it would of been fun to see where it goes with others making special appearances.

Is the glue that holds everything together. The Coroner is the Crypt Keeper here hosting the stories in a flat out entertaining performance by John Carpenter. 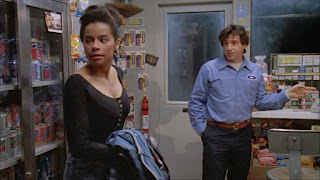 “The Gas Station”
Robert Carradine as Bill
Alex Datcher as Anne
Wes Craven as Pasty Faced Man
Sam Raimi as Dead Bill
David Naughton as Pete
Lucy Boryer as Peggy
George Buck Flower as Stranger
Molly Cheek as Divorcee
Only story that makes me feel like I didn’t waste my time. The others aren’t horrible but the this one just works. It’s a simple slasher, which paired with guests set the bar way too high. Seeing the likes of Craven, Raimi and Carradine peeked my interest. But I guess its just too good for this film, because sadly the others don’t come any close to “The Gas Station”. 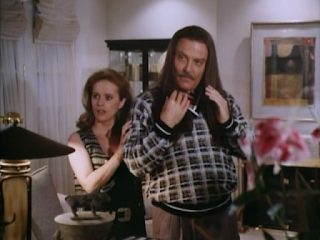 Stacy Keach plays a guy who isn’t happy with his thinning hair. Sheena Easton says no and she loves him anyway. But it’s just too depressing 🙁 …He tries a few comical treatments but nothing helps. I’m pretty sure this whole story was suppose to be the funny one then again it was the 90’s. And let me say its very 90’s, very very 90’s.

He see a commercial and decides to try it. “Dr. Lock” played by David Warner (Titanic, Tron, The Omen) is the doc that can help. He asks Stacy what kind of hair he’d like using a 90’s computer generated program, you know how that looks without me saying anymore. Keach picks the Stallion. Yep it is its name, long black hair (see picture). And the whole things was done over night, without surgery! Sounds to good to be true hun? Well it is… And when you find out why, it feels like a copout. When its revealed I could hear myself say, “Really?!” I didn’t care much for it but I did like it more then the “Eye”. “Hair” was so bad yet I honestly think I liked this story about a guys hair more then the guy and his eye. 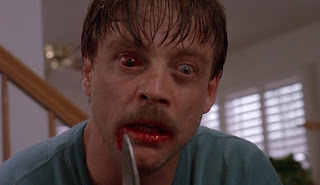 Were “Hair” was about hair I bet you can’t figure out what “Eye” is about?…NOPE

Your wrong it is about…

A eye. Let that settle in a bit. We have a film that is made up of three stories. Two are about something on your body. Not much to pick from apparently. “The Gas Station” stands out for its pacing and the fact its different then the others. “Hair” and “Eye” are about two guys getting transplants. And its goes wrong, like it feels like they didn’t try. “The Gas Station” isn’t a perfect film, but the “Eye” and “Hair” come off like they ran out of ideas and gave it to their 8 year old son to write. When you have three films it should feel like three and not two.

“Eye” is about a baseball player with an annoying accent. His wife played by Twiggy losses her American accent a few times and that too becomes annoying. Mark Hamill here is somewhat a joy to watch. The thing is he has always been but here I feel he was wasted. When he gets into a bad car accident in which his right eye is destroyed. He ends up losing it but receives one from a donor. The donor ends up being a serial killer who killed woman and had sex with them. This eye begins to take over the good old southern wholesome baseball player who was making his way to the top.

And thats it. Still feel hungry for more don’t you? Yeah thats how I felt.

Should of been left out. Or give us more. I didn’t mind the story but there could of been more, the story came up short for me on creativity. 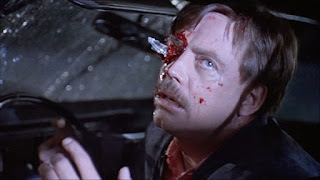 Like the “Hair” I think it should of been left out. What would of been cool if they connected it to “The Gas Station” and its serial killer. Maybe that was his eye, sure it sounds like Im doing a copout but at least it’s something.

Because what we got in the end was very un-filling.

The Horror Time Capsule – 1991: The Pit and the Pendulum

The Horror Time Capsule – 1995: Tales from the Hood