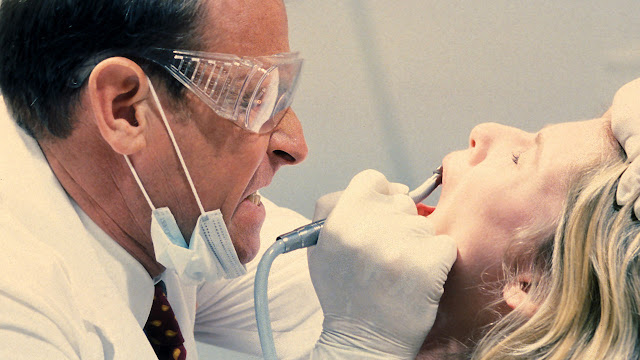 “It’s Time For Your Final Appointment” 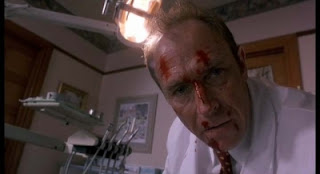 From the Director of Beyond Re-Animator, Bride of Re-Animator, Return of the Living Dead III and Initiation: Silent Night, Deadly Night 4 comes…

The Dentist. A gory of a slasher with the frosting of comedy. The Dentist isn’t a masterpiece by any means but it does entertain. It is a bit goofy in every sense. But the strong part is its ability to make the audience squirm. Using a Dentist as its slasher is already grabbing a majority of people who hate going to the Dentist. Utilizing this with the operation rooms is the best thing of this film.

Breaking teeth, using Clamps, Vices, Fastening in mouths and of course Drills is what makes this film a must watch.

A few minutes in you’ll understand this is unlike most slashers, it’s a over acting 90’s slasher that makes the viewer squirm in their seat. Thats unique because it feels real. 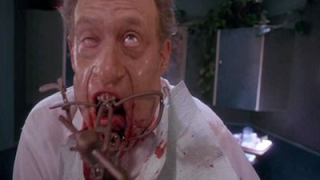 For an example a puppet spitting up warms isn’t that itching to the spine. But a Dentist knocking out a girl, ripping off her pantyhose, touching and kissing her is.

Watching teeth break is and a man with a transplanted eye from a serial killer isn’t.

The Dentist uses real life events (yes to the extreme) to make us entertained no matter how over the top it may be. The strongest thing a film can do is connect to the viewer and The Dentist nails that.

It a fun watch that does nothing but flat out entertain. 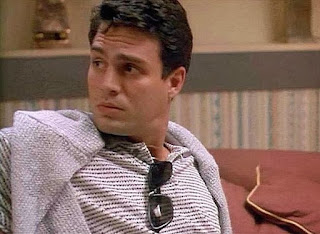